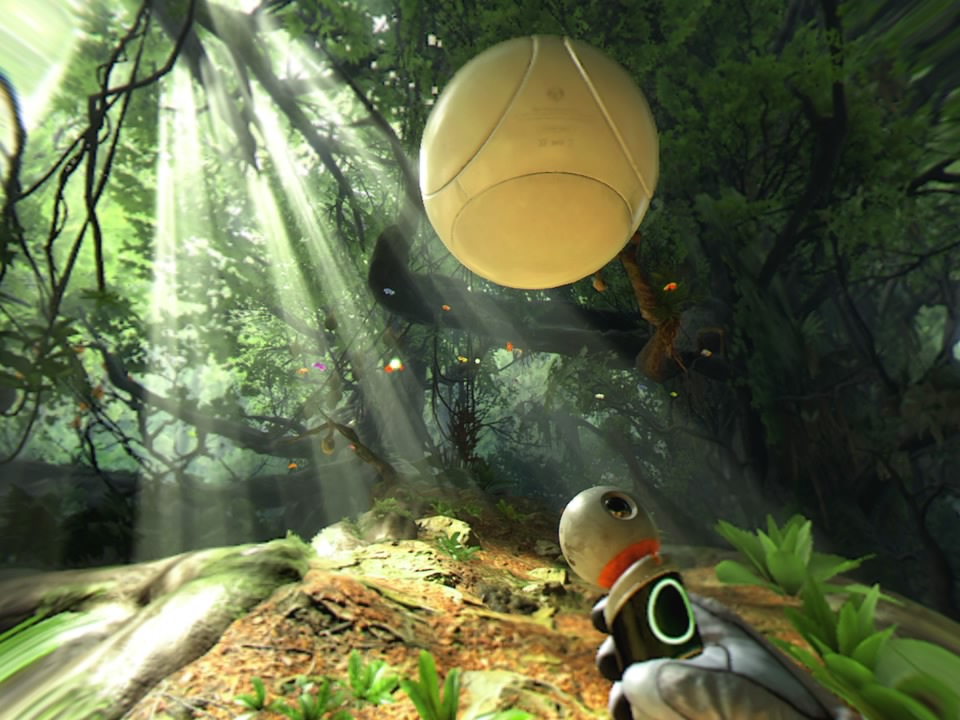 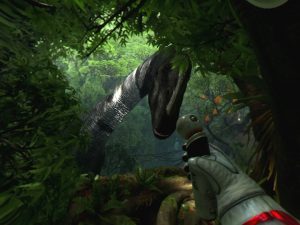 While PSVR has already created some very striking worlds, players will have noticed that there is a bit of compromise required when these are rendered for the headset.  Pixelisation and blurring can be a bit of an issue and not every developer has been able to stride out and confidently push the technology.  But then not everyone is Crytek.  They’ve always liked to push the envelope when it comes to their CryEngine software and Robinson: The Journey really does take things to the next level.  The sort of level where your jaw drops and you practically snap your own neck as you try to take in everything.

The game’s story is a twist on the whole desert island theme.  You play as Robin, a child who has found themselves alone on the planet Tyson III after the spacefaring colony ship Esmerelda crashes.  The status of your family and other colonists is unknown, but it doesn’t look good.  You accompanied by a floating HIGS droid that sounds like that gold robot ponce from Star Wars and gives you advice throughout the game and Laika, an infant tyrannosaurus that you’ve befriended.

The story of the Esmerelda is your main concern and so Robin has to track down any remaining HIGS units on the planet to piece things together and find out if anyone else survived, and what caused the crash in the first place.  However, the planet is a dangerous place for young Robin, given that it has, y’know, dinosaurs running about.  The gameplay from this point involves adventuring, puzzle-solving and some stealth.  In many ways it reminds us of Loading Human in that the way ahead isn’t always that clear.  Once you know what to do, doing it isn’t difficult but figuring out what the game wants is usually the problem.  Events trigger other events but sometimes I’d find the game not progressing until I restarted it, or after ten minutes of me getting madly frustrated and shouting ‘fuck this game!’ until suddenly I was moving onwards again. 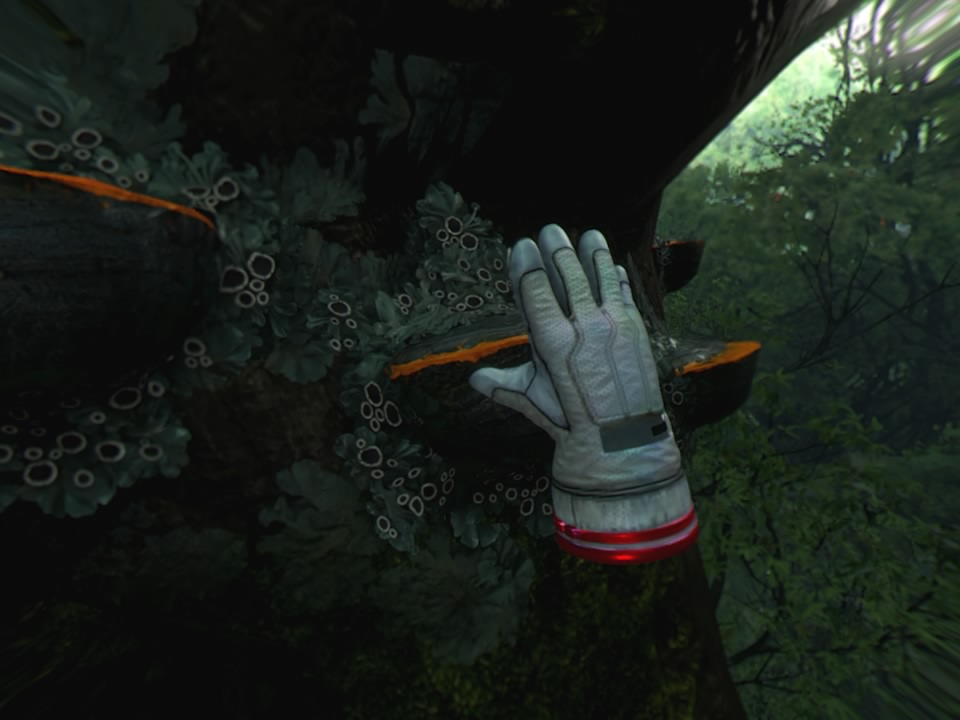 However, the adventure is worthwhile.  The story is relatively engaging and the setpieces the game throws a you are certainly memorable.  The game is short though.  For me, it was just about right.  I don’t want twenty hours of this, but the four or five hours it took me to get through the game were enough and given how strongly the game ends, it has left me with a very positive impression of the game even if at times it can feel like a walking simulator.

As with Loading Human, the game would suffer a critical mauling if it wasn’t in VR but Robinson‘s ace in the hole is the graphic design which is nothing short of stunning.  You’re not paying for an amazing puzzle/adventure game here, you’re paying for the experience.  The experience of seeing caves lit up by glowflies, the wonder of seeing a jurassic world mixed with crashed future technology and the sheer spectacle of walking amongst huge dinosaurs.  It is genuinely amazing and the ending takes it up to an even higher level. 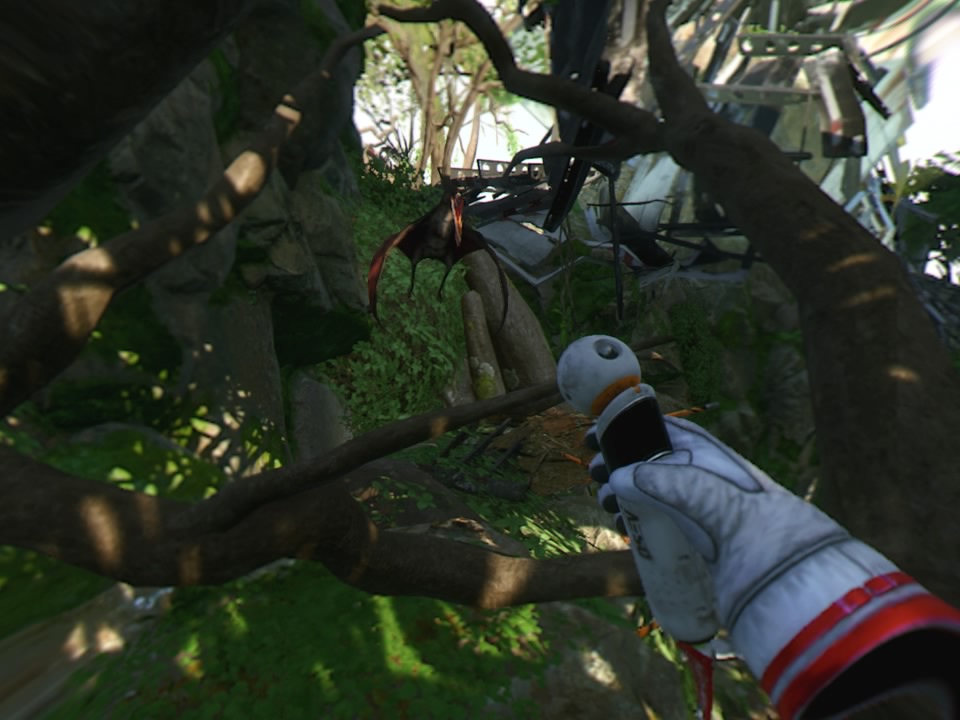 The feeling of being there is something else.  I set the motion so that it was smooth rather than the usual eight-way turning jumps that these games put in to protect you from motion sickness.  My first session with it was a little bit tough on my stomach but my last session (three or so hours to get the game finished) was fine.  It’s worth making the effort to get used to it because the world of Tyson III is so spectacular and the feeling it generates is worth the risk of losing your lunch.  Whether you are sneaking around some pissed off raptors or scaling up a tree in the jungle, the sights this game offers are unparalleled.

The visuals are matched by the excellent sound too.  Sure, your over-protective poshboy HIGS unit is kind of annoying but the sound really helps put you firmly in the game world with plenty of natural sounds that help the immersion immeasurably. 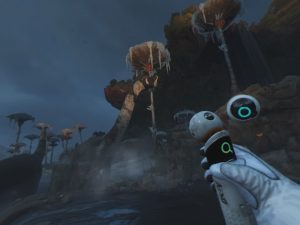 The issue with all this is that the game is full price.  For a game with very little replayability (trophy hunters will get more out of the game than people just playing for the story) the price tag is pretty steep.  However, the visuals are so much better than anything else that you’ve seen.  So, if you’ve got cash to burn and eyes hungry for some sweet, sweet candy then this is good.  And given that this was a review code from the publisher, I’m not going to be suffering from buyer’s remorse.  But if you let those secondhand copies pile up at your local shop and wait for a decent price, this is the sort of game that you should play, just to see what VR is capable of.

If Journey can garner nines and tens despite having zero gameplay and horrid beige visuals, then Robinson: The Journey can get a generous seven from us.  But, as with any game that puts the experience before the gameplay, the choice to buy should be carefully considered.   But, man, the sights on offer here shouldn’t really be missed.

Robinson: The Journey
7 Overall
Pros
+ One of the most strikingly beautiful games we've seen. + Tells a good story. + The adventuring works really well in VR. + Is probably the right length if you take the cost out of the equation.
Cons
- The family-friendly story means that there isn't much peril in the game. - Puzzles aren't signposted. - Not great value for money.
Summary
Taken as an interactive adventure, Robinson: The Journey is a stunning way to enjoy your PSVR headset. The world it creates is beautiful and the level of immersion is unparalleled. The gameplay isn't nearly as exciting but is still a good adventure game but that's not what they are selling you here. This is straight up eye candy.

One thought on “Robinson: The Journey – PSVR Review”