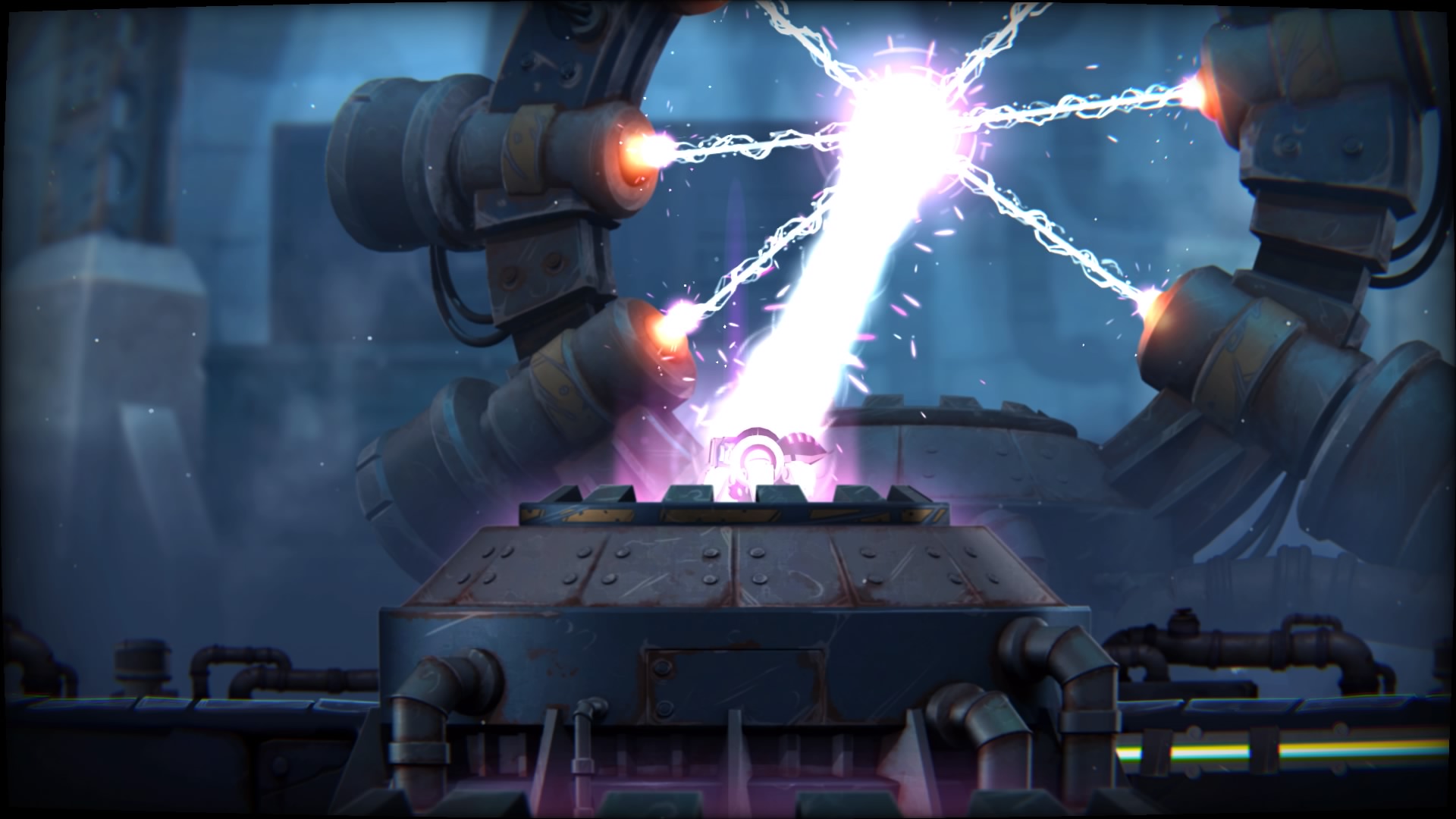 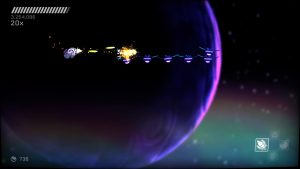 RIVE is a 360 degree shooter/platformer hybrid from Two Tribes. You play as Roughshot, a space scavenger who gets trapped on a mysterious starship. It doesn’t take long to realise what sort of game RIVE is, from its personality to its gameplay, it wears its heart on its sleeve. You have to press ‘the any key’ to start the game and there is only ‘Hard Mode’.

I wouldn’t say Roughshot knows he’s in a game, but he’s aware of gaming. He starts the game by setting his external camera to a side-scrolling view for example, to make exploration in his spider tank easier. At other points he will activate his autoscroller mode and wonder if he should add ‘in app purchases’ to make things easier. He’s also constantly referencing other games (even by name) as well as books, movies, you name it. Not every joke hits and it’s not the first time this has been done but it adds a lighthearted twist to what is a difficult game.

You control your spider tank as you go left and right with light platforming by jumping with L2 and shooting enemies with the right stick. You have a health bar so you won’t die in one hit and when you do die the checkpoints tend to be pretty generous. As you kill enemies you can pick up currency that you can use to upgrade your tank with more health or different special attacks that can be activated with R2. There are four all together, with the homing rockets being my favourite. There’s also a short range shotgun blast, bouncing mines and an electric shock.

These attacks are limited and you need to pick up ammo from downed enemies to activate it. You can only hold one at a time and once it’s fired you need to hope an enemy drops another before you can use it again. From what I could tell the drops were random which meant there were times where I had a load of ammo lying around unused and other times I’d fire my special attack and then be without any ammo for a while. It felt a little too restrictive and meant I didn’t end up using my special attacks maybe as much as I should. You switch which special attack you want to do with the face buttons so changing mid battle isn’t easy so tactics didn’t really come into play either. 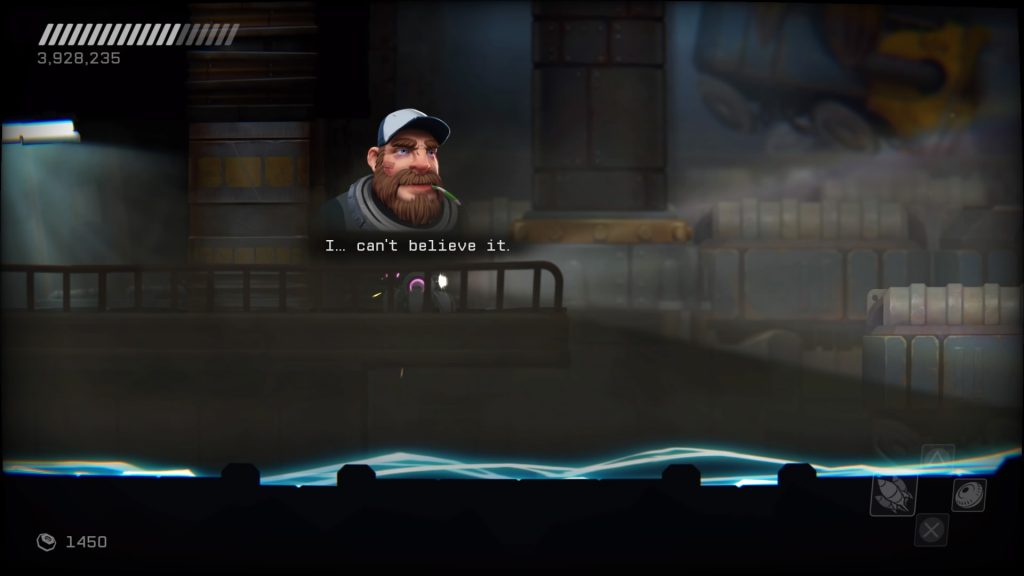 Beyond shooting stuff as you progress through the game Roughshot gains the ability to hack enemies by changing to hack mode with a touch of L1 or R1 and aiming your beam at the thing you want to hack. You start off being able to hack turrets which makes the turret float around behind you and attack in the same direction as you, effectively doubling your firepower. They have limited ammo so don’t last forever but since you can’t upgrade your default gun (most enemies require multiple hits to take down) the increase in attack power is nice. You can only hack one thing at a time so you can’t have an army of drones unfortunately.

Soon after you’ll gain the ability to hack nurse bots which will heal you when needed, again only a limited amount. You’ll gain the ability to hack more enemies as you progress, though it tends to only be available at certain set pieces, depending on what enemies are about. I’d have liked to have seen a bit more variety in the things you could hack and a bit more strategy in how you use them. Do you hack this turret to make you more powerful or get the nurse bot to help your survivability or perhaps another bot that could deflect bullets or something and you could choose depending on your play style. It tends be a case of here’s something you can hack, you might as well do it.

RIVE is split into levels and although there is a little exploring with some optional collectibles hidden around you’ll generally move along a linear path, get to a room where a fight will occur with enemies spawning in for a while, before moving on again. The action can be pretty hectic and the visuals are very nice although, despite doing a good job of conveying explosions and the like, I had to turn off the screen shake as I just found it too disorientating. Similarly I found the camera to be in a little too close, with the majority of enemies simply flying into you as an attack meaning you’d often have no time to react and take a hit. 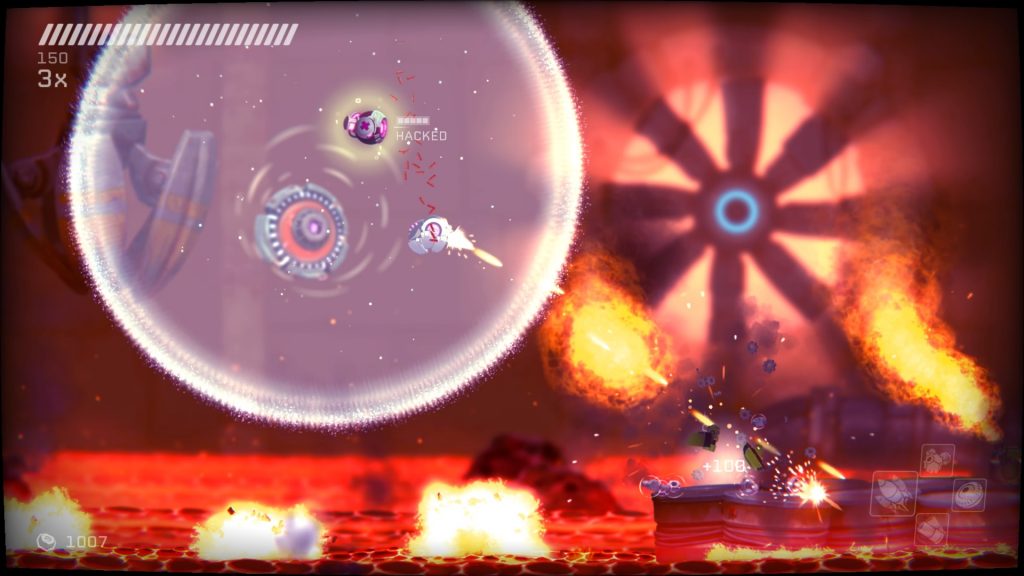 To compound things in this regard you have next no invincibility frames and each hit you take knocks you around which can result in you going from full health to dead very quickly. There are also moments where you’re in a rush as you’re being chased and you’ll be killed by something you could not have anticipated. This happened multiple times in my playthrough and as I said earlier the checkpoints are quite frequent but what equates to a forced death is no fun. Again, a further out camera would give you more time to anticipate obstacles or simply be able to see a trap.

Speaking of checkpoints they don’t just happen when you’ve cleared all the enemies and more often than not I’d respawn after dying and be attacked instantly by an enemy, because the game had checkpointed me before I’d killed everything. Towards the end I even had a checkpoint after I’d died. So I’d reload to a death screen. Thankfully it was the beginning of the level so I could restart without losing much progress but had that been the end I’d have been forced to do the whole thing again.

Upon completing the game you unlock ‘Speed Run Mode’ which just times you on individual levels or across a whole campaign run if you choose and ‘Single-credit Mode’ which asks you to complete the game without dying, although again you can do individual levels as well if you choose. A nice addition but it will only appeal to a certain type of person. You can also reload individual levels in the campaign if you want to go for high scores on the online leaderboards or for trophies, though the game doesn’t keep track of the different collectibles for you which is an oversight.

At around five hours depending on how often you die RIVE isn’t the longest game but the length feels about right for what is here. You will die often but the checkpoints are generous enough that you won’t lose too much progress, only the bosses will require a little extra care and attention as they generally don’t checkpoint mid battle. I like its personality although it didn’t make me laugh too many times and the combat feels good despite the lack of invincibility frames upon being hit and the enemies taking more than one hit to take out. 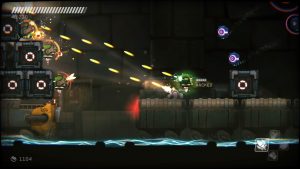 If you’re not afraid of dying but don’t want to have to do a perfect run to beat a game then RIVE will scratch an itch. If you do want to do a perfect run then ‘Single-credit Mode’ has your back. The upgrades could have been more interesting and the hacking is underutilised but the core is strong and the dialogue may raise a wry smile.

RIVE
6 Overall
Pros
+ Hacking idea makes it different from your usual shooter + Constant dialogue manages to stay on the right side of funny + Basic shooting engine is fun + Frequent checkpoints
Cons
- Camera is in too close - No invincibility frames - Hacking could have been more interesting - Checkpoints can land you in bother
Summary
A twin stick, side-scrolling/platformer/shooter hybrid with an element of hacking and humour thrown in to add its own personality to things. If you're looking for a challenging game that doesn't ask you for perfection, then RIVE might just be what you're looking for. Just don't expect perfection from it either.

One thought on “RIVE – PS4 Review”