Dark Souls gets thrown around as a comparison far too much these days. Any game which has the audacity to kill you (in game, obviously) is automatically compared to From Software’s now classic series and as such it’s lost most of its meaning. Annoyingly I now have to compare Remnant: From the Ashes to Dark Souls, but I do so as it’s unavoidable.

There are some differences without question but it would be easier to list what Remnant doesn’t share mechanically with the Souls series than list what’s the same. I’ll go into proper detail for those who haven’t played a Souls game before but certain things will sounds quite familiar for those who have. 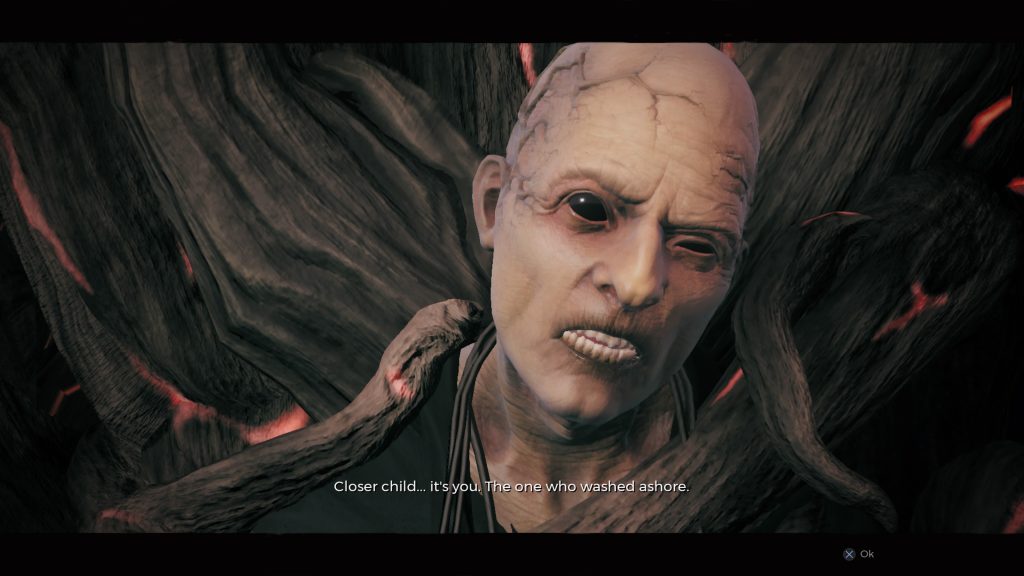 You create a character and are then on your way towards a tower by boat when a wave takes you out. You awaken on shore with only a sword to defend yourself and head inland. Here you’ll encounter some enemies called the Root (they’re plant based) and before long you may well die. This isn’t game over however, like in certain Souls games you’re meant to die here (if you survive the gameplay you die in a cutscene) as you’re rescued by the inhabitants of Ward 13.

Ward 13 is your hub, where NPCs and vendors hang out and you can return here to upgrade equipment and progress the story. The NPCs aren’t that interesting though with very little progression to their tales. From here you’ll teleport out into the world proper, which is overrun with Root and seen better days. Your quest is to rid Earth of the Root, with stories of those who have tried before making themselves known as you go.

The world is randomly generated when you enter it, so each playthrough should be different. That goes for items, bosses and side quests as well. You will not see everything the game has to offer in one playthrough. The world is split into smaller chunks with load times in between. You’ll normally have a couple of larger outdoor areas joined by smaller indoor sections with mini-bosses mixed in and a world boss at the end. At the beginning of each section is a crystal which acts as a checkpoint, a teleporter and refills your health and ammo whilst also respawning all the enemies in the area.

As you explore you’ll encounter plenty of enemies. You play from a third person perspective and you have a range of options when it comes to combat, starting with your weapons. You have a long gun, a hand gun and a melee weapon. Each gun has limited ammo which will sometimes drop from slain enemies and shooting them feels great. They really feel powerful. The melee weapon, despite there being a stamina system, does not require stamina to swing but obviously puts you in danger if used recklessly. The stamina system is used up by running and dodge rolling, which like a certain other series has invincibility frames leaving you unharmed if timed perfectly. 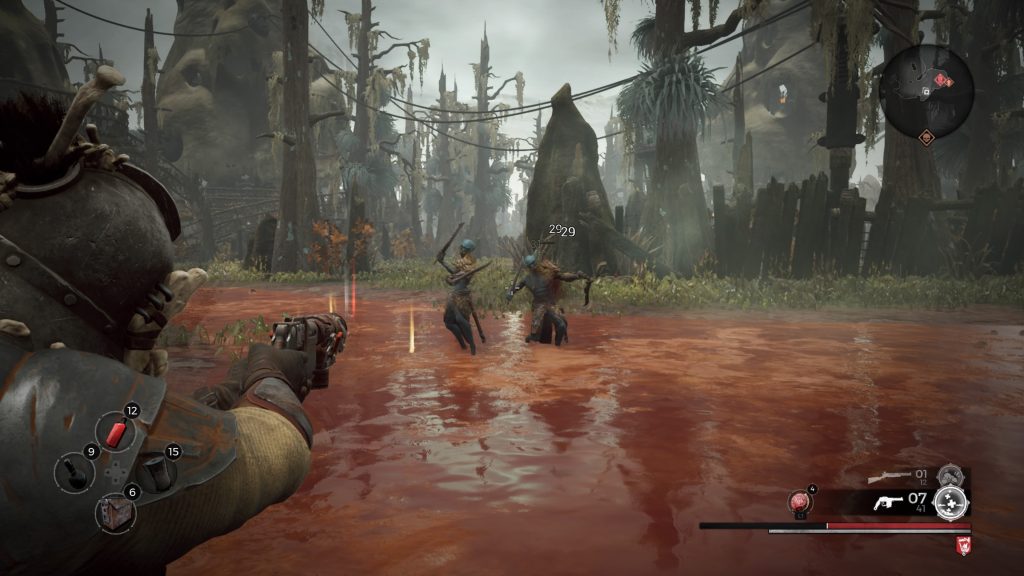 Rather than stamina management you’ll be concentrating on ammo management. Switching weapons for different enemies, making sure you have time to reload when needed and using melee to conserve ammo when possible will make sure you take control of encounters, rather than blindly rolling around as you try to avoid mobs. Enemies will generally come in groups, or even swarms at certain points so crowd control and target priority is incredibly important for survival. Special enemies will appear at times with a sound cue. These enemies have more health, are stronger and are unique and dangerous, much like the Hunter, Smoker, etc. from Left 4 Dead.

You have a multi-use health item that replenishes when you rest or die as well as other consumables to buff you or heal status effects. If you do die you don’t lose anything, so it’s quite lenient in that respect, but you do return to your last checkpoint and all the enemies respawn meaning you have to fight your way through the waves of enemies again. Respawn times are pretty much instantaneous which is excellent, though when moving between areas or warping the load times are too long at around thirty seconds which makes a quick trip back to Ward 13 to upgrade not that quick at all.

Enemies will drop ammo and crafting materials if you’re lucky and littered throughout the stages will be scrap (your currency) and crafting materials for upgrading your weapons. You’ll sometimes find accessories (rings or necklaces) which give you stat buffs or even new armour. Each armour, as well as offering you protection and a new look, has a set bonus that will increase their usefulness the more parts of a set you equip, with bonuses such as reduced stamina usage and increased chance of finding scrap. Killing enemies also gives you experience which unlock trait points. Traits are unlocked after certain actions or events and act as a permanent boost that can be upgraded with the points earned and help give you an edge in battle. 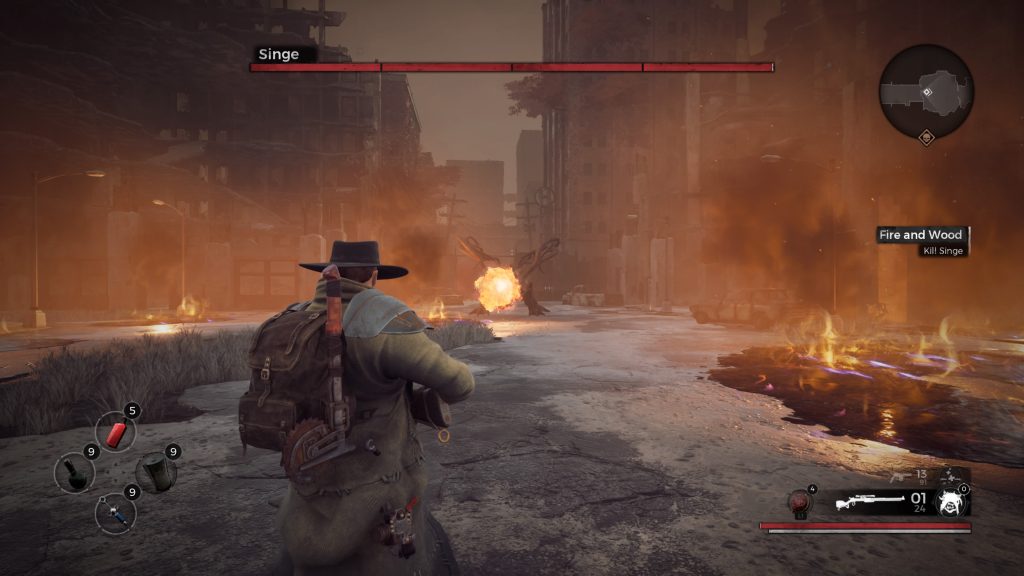 Exploring is important for finding this loot, but because the levels are randomly generated it’s not as fun or rewarding as it is in the Souls titles. A hand crafted experience would have made the levels more interesting to traverse, as it is they’re mostly just a monster gauntlet with the chance of loot. When you branch off into other areas then you may encounter set pieces which are a nice change of pace and usually reward you with something unique at the end, if there was more like that then working your way through the world would have been more fun but as it is you’re mostly just wandering some convoluted corridors.

What can alleviate that a little is if you play with others. Remnant: From the Ashes allows up to three players to play together and it’s not as difficult to arrange as in the Souls games. If you have friends who also own the game then you can simply see them playing and join them in their world. As the world is random there’s a high chance that their world will hold different items, bosses and events than yours and everyone playing gets all the items. Weirdly ammo pick ups aren’t shared so you have to be careful that everyone has enough to use but everything else is given to everyone which is fantastic and encourages you to play with others.

If you don’t know anyone else playing the game then you can play in your own game but have it open for others to join or you can matchmake and the game will dump you into a world of its choosing. This is fine, but a bit of a shame if you’re hoping to play in a specific area. Each time I played with randoms I ended up at the final boss which I would not have joined by choice at that time. I would say though that each time I played multiplayer my session ended due to a loss of connection rather than me leaving through choice, once right at the end of an incredibly long boss fight. You can stick around as long as you like and I did get some good game time in which ran smoothly but it could be stabler. 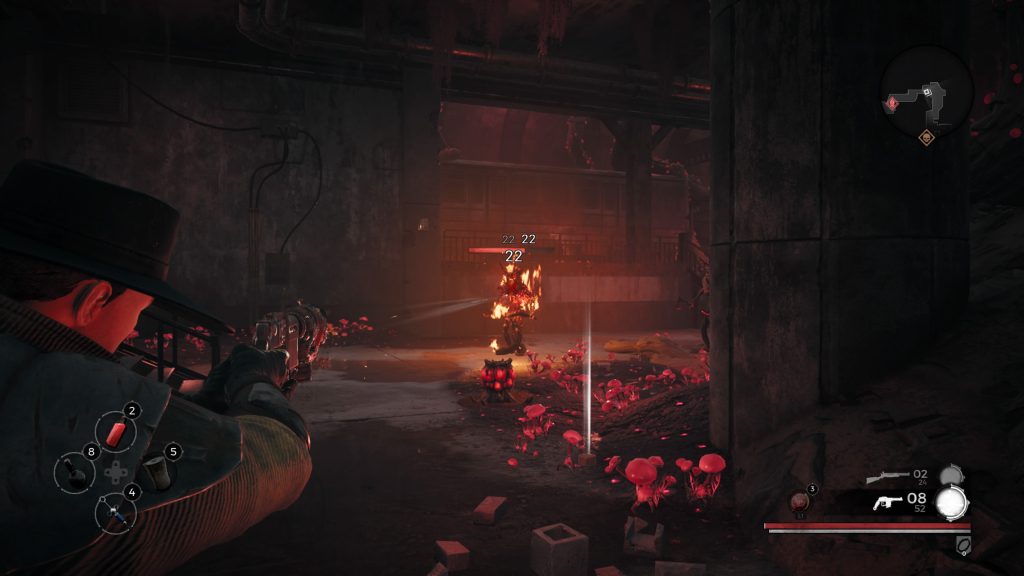 The game in general I would say is designed for multiplayer. I played through the whole thing solo just to see if I could and it is possible but the way encounters are structured with enemies attacking in numbers it feels like you’re supposed to have allies to help keep things under control. When playing with others the enemy numbers go up as do their stats but the exploration portions are far easier and quicker to navigate with multiple people working together. Bosses seem to be a mixed bag with some being easier solo whilst others are far simpler with others.

The bosses are a little disappointing in general. You’ll have mini-boss encounters which will just be a powered up version of a special enemy that you see in the levels, but there are also a few actual bosses too. These are unique but don’t have too many attacks and are over reliant on adds – flooding the arena with normal enemies. As with most enemies in the game in a one on one situation the bosses would be so simple and easy, but rather than design them differently instead you just have to juggle fighting lesser enemies as well as putting damage on the boss. Some handle it slightly better than others, with some summoning enemies every now and then as a move in itself, whilst others simply have a steady stream coming in at all times.

It ends up with you fighting normal enemies more than you fight the boss, which doesn’t make for a great boss encounter. I can only think of one fight (due to the random nature of the game I’ve not seen everything yet, despite ‘finishing’ the game) which didn’t have adds and that already had two bosses in it. You could argue that the adds are to ensure you have ammo drops, but you’ll be using ammo on the adds to kill them, they don’t always drop something and the arena could have ammo just magically appear for all I care if it made for a good boss fight. In Dark Souls most of the bosses are the highlights, but here they feel like the weaker Dark Souls 2 bosses, which isn’t great. 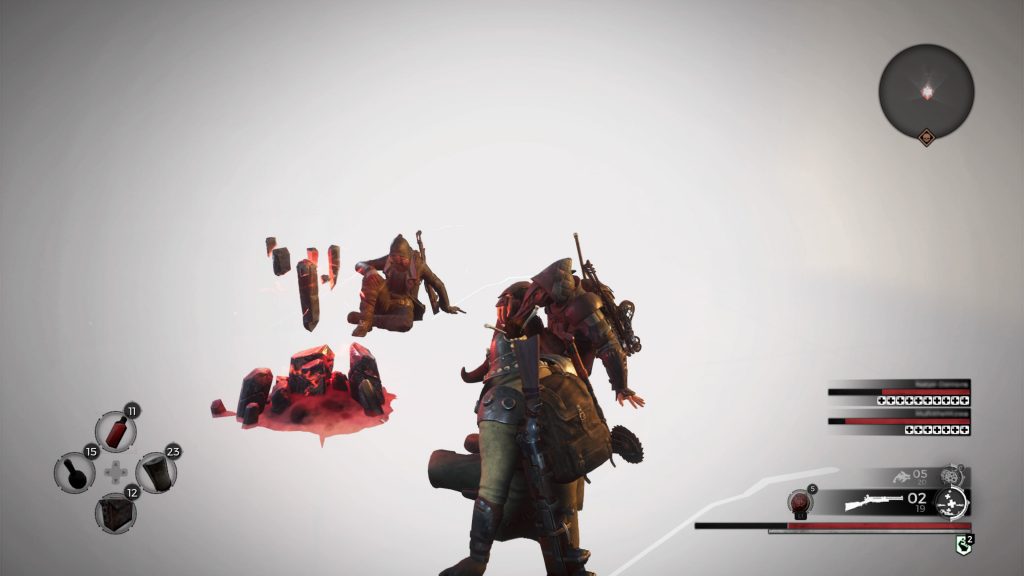 However, despite my issues with Remnant: From the Ashes I can’t stop playing it. You can re-roll your campaign at any time and as I have defeated the last boss I have done so and am half way through my second run. New scenarios have appeared, though only one boss has been different so far. Although mechanically it is very similar to Dark Souls the closest comparison when playing is possibly Diablo. The loot game is different in this in that it’s not so frequent but levelling up your gear and finding/crafting new stuff is what keeps you going, not exploring the environments out of curiosity.

If you can get a friend or two to join you, and this isn’t quite a full price release at £33 on PSN, then you’ll have a lot of fun in each other’s worlds. That’s not to say it won’t be frustrating at times as you get overwhelmed by mobs of enemies but the loop is addictive and the gunplay fun enough to endure the weaker parts of the game. The devs are continuing to support the game after launch so hopefully the game can become a great one over time, but even as it is now Remnant: From the Ashes is worth checking out.

Remnant: From the Ashes
7 Overall
Pros
+ Addictive progression
+ Multiplayer is fun and encouraged
+ Gunplay feels great
Cons
- Random environments make exploration a little dull
- Bosses are too reliant on adds
Summary
Remnant: From the Ashes is an addictive loot shooter, especially in multiplayer. The bosses are a let down and exploring for the sake of exploring is dull but when you're blasting enemies with your range of weaponry and are rewarded with new gear or upgrade materials you just want to keep playing.