From Austin developer Ragtag Studio who also double up as publisher, comes Ray’s The Dead. The titular Ray is a luckless individual in both life and death. Across five distinct chapters you’ll unravel the events that led to your untimely death. Ray’s The Dead was first unveiled in 2013 at the PS4 launch announcement, so its gestation period was almost as long as a Fumito Ueda game. Released on the cusp of the PS5 launch, we started playing the game on our PS4 and finished up playing on the PS5.

You play as Ray who, as the title might indicate, is dead. But not completely dead. More one of the undead cursed to walk the earth. At the outset you’re introduced to the game’s mechanics in terms of the fact you’re able to, yes, raise the dead. D’you see what they did there? At first you’ll have a few easily accessible graves in Mourningside Cemetery to rouse some helpers from. Hold up on the d-pad and you’ll resurrect some minions. 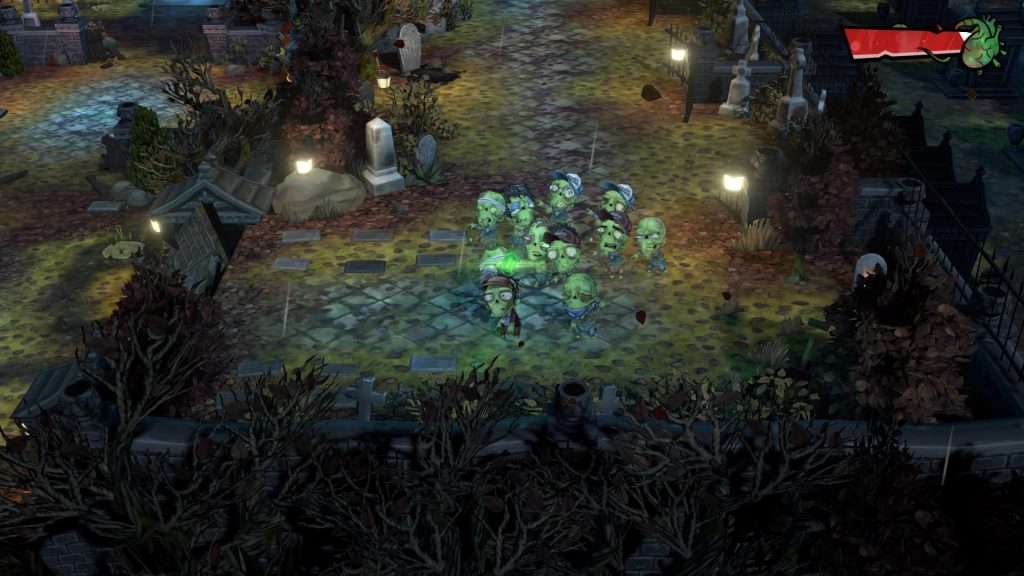 Early parts of Ray’s life are depicted by nice little flashback sequences where you still control minions, although rather than undead they’re the neighbourhood kids. They perform in much the same way, only without any attacks. It’s a handy way to introduce the crowd dynamics anyway.

The ability to raise a corpse is highlighted by a green glowing orb, just as later you’ll gain the ability to resurrect pets too. You can corral your minions into a nice tight formation by holding

, this comes in handy when getting through tight spots. Similarly, when one your party is incapacitated in battle, you can tap

once again to  break the stun.

This gaining of undead helpers might seem a little bit like late-era original Xbox title Stubbs The Zombie, this is no coincidence given that two of Ragtag’s number were developers of that too. Only rather than the city of the future from Stubbs, you’ll be cavorting around suburbia. Other similarities persist in terms of your being able to eat brains with

, though you’ll only have a limited window to do so until the individual on the brink of death succumbs. 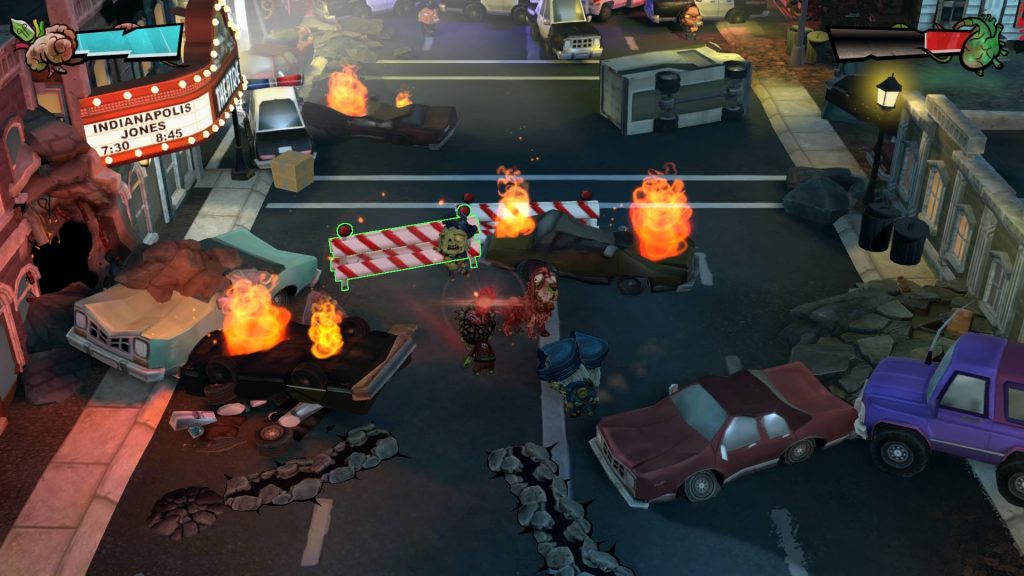 On your own you’re pretty vulnerable, so strength is very much in numbers. You can sic your horde on to enemies, though in practice you’ll occasionally struggle to keep enough alive. This isn’t helped particularly by some tight arenas, nor in the case of one niggly fight early in chapter two where you have multiple attackers on the ground as well as firebombs being thrown in your direction.

It’s not helped by the fact that enemies are often offscreen or obscured by scenery yet you’ll be unable to see if they’re charging up to attack you. This is made worse by the fact any lengthy encounters reset to the beginning over and over, which while useful for getting trophies for stuns and brain eating, really drags things out. A little more checkpointing between each wave of enemies would alleviate this, but as things stand it’s a definite ballache. 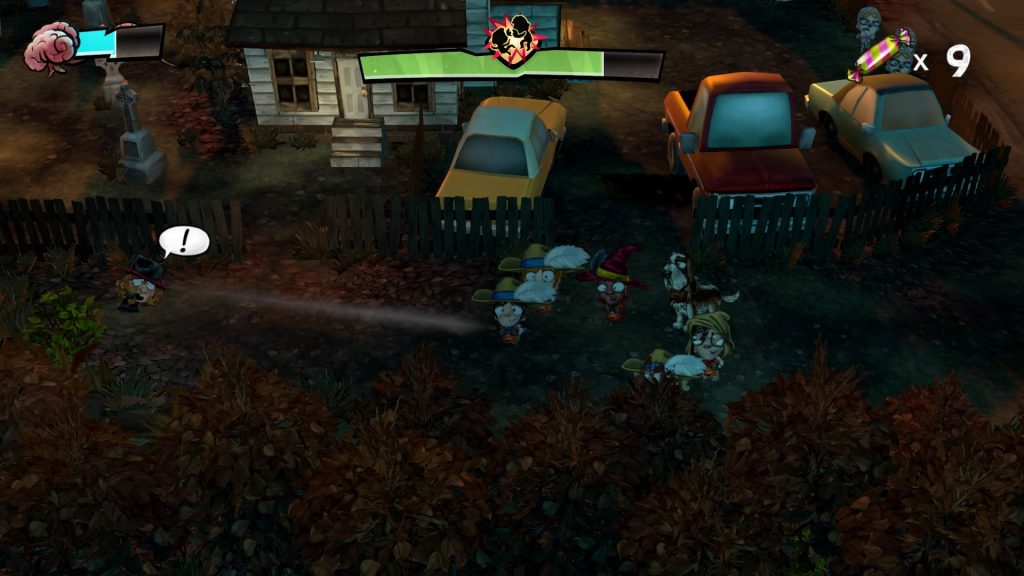 You can send different zombie types in to attack by way of each of the main face buttons, though in practice you’ll find yourself spamming the buttons to see off enemies. You can also deflect rushing attacks by shielding with

, though we found ourselves tapping

instead and getting most of our guys wiped out. When the opposition will actively target your stunned allies to permanently kill them, you can find yourself on the back foot very quickly. 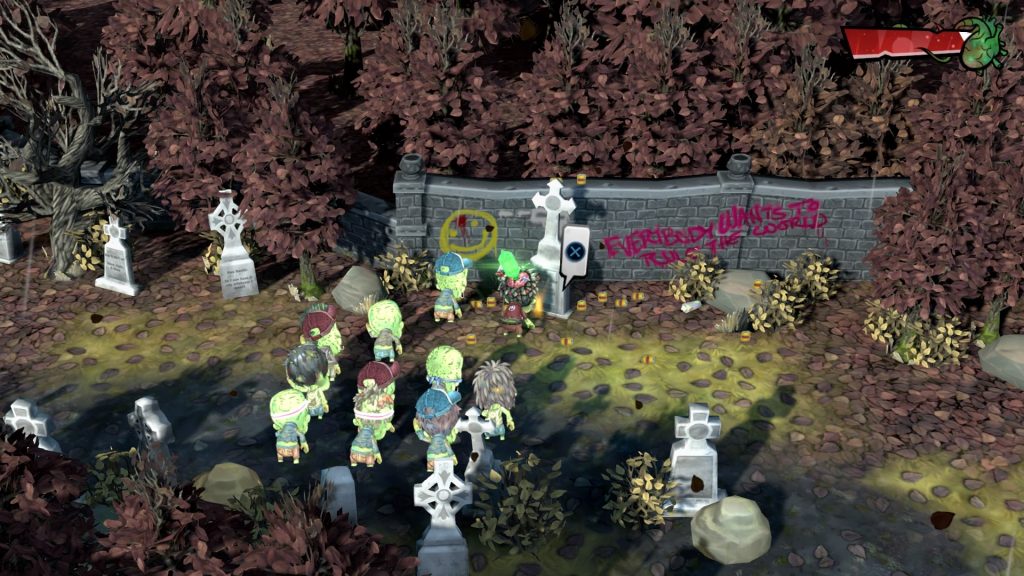 Unfortunately no amount of well written plot can make up for the sloppy combat and the fact that you’re very much hamstrung by a stamina bar that never seems to recover in the more frantic fights. It makes things far too attritional and it almost feels like a Soulsborne in terms of the fact you could die at any second.

What doesn’t help is that your primary mechanic for health recovery is brains and if you’re being targetted by incendiaries or rushing enemies it makes it damn near impossible to recuperate at all.  The incendiaries thrown by offscreen enemies are particularly cheap in that they can target you wherever you are in an area making it a priority to get rid of the source. But often you’ll die. It sucks to be quite honest. One fight in front of a town hall must’ve taken us at least twenty attempts. 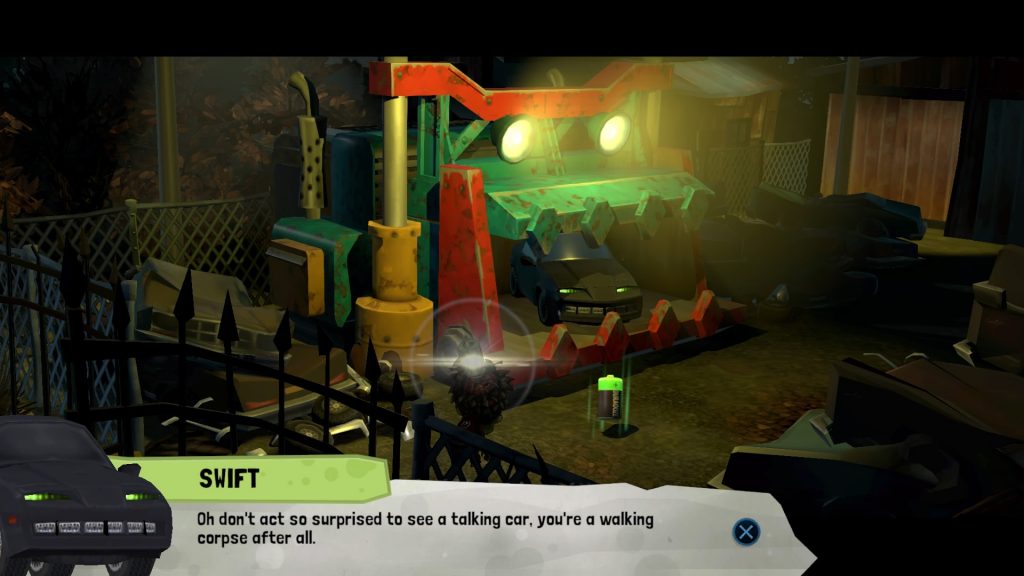 Yet for all the bullshit combat, we still felt compelled to carry on. Who knows why, but Ray’s The Dead got its hooks into us. Yes, the fights are shit and you’ll get a really long way through successive waves before succumbing once again. And the fact you never seem to have enough stamina and end up kiting enemies around to stand a chance. But despite all that, Ray’s The Dead is like one of the lesser Prince albums. You can see there’s quality there but it’s let down by no outright bangers. It’s just alright you see.

If you’re a fan of Stubbs The Zombie, and let’s be honest, that’s a fairly small niche, Ray’s The Dead might well suit you down to the ground.  But for anyone else you’ll do well to find a way to stop frustration overwhelming the experience, in our case playing on our new PS5 made us not slam our Dualsense into the couch or throw it. Cheap deaths happen just that bit too often and you feel powerless in the process. Were it our DS4, we expect it’d have flown several times in the evening we finished off our review otherwise.

Ray's The Dead
7 Overall
Pros
+ Having control of your own little horde is good fun
+ The tutorial stages are done with a deft touch via flashbacks
+ Well written plot
+ Excellent music
Cons
- Cheap deaths are in abundance
- Fuck those incendiary pricks
- Dying due to low stamina happens all too often
- No checkpointing against multiple enemy waves
Summary
Ray's The Dead is a well written zombie horde 'em up in the vein of Stubbs The Zombie, but just let down a little by frustrating combat. It's good but not great.