There’s something going on with the shoot ’em up genre at the moment.  We’ve recently reviewed Project Starship and Red Death.  Two vertically scrolling shoot ’em ups with ‘interesting’ visual styles and the longevity of a mayfly.  Well, now we’ve got Rainbows, Toilets and Unicorns which shares those traits.

So, yes, it’s a vertically-scrolling shoot ’em up that adopts a bright, cutesy look similar to something like Twinkle Star Sprites.  The game has five ‘worlds’ and each one has five stages.  If you die on any of the stages, you go back to the first one of that particular world.

There’s not much to the basic gameplay.  You are, as expected, down the bottom and you shoot upwards.  You control your avatar with the left stick or d-pad and shoot with

.  The only other control is

which activates a smart bomb of sorts. 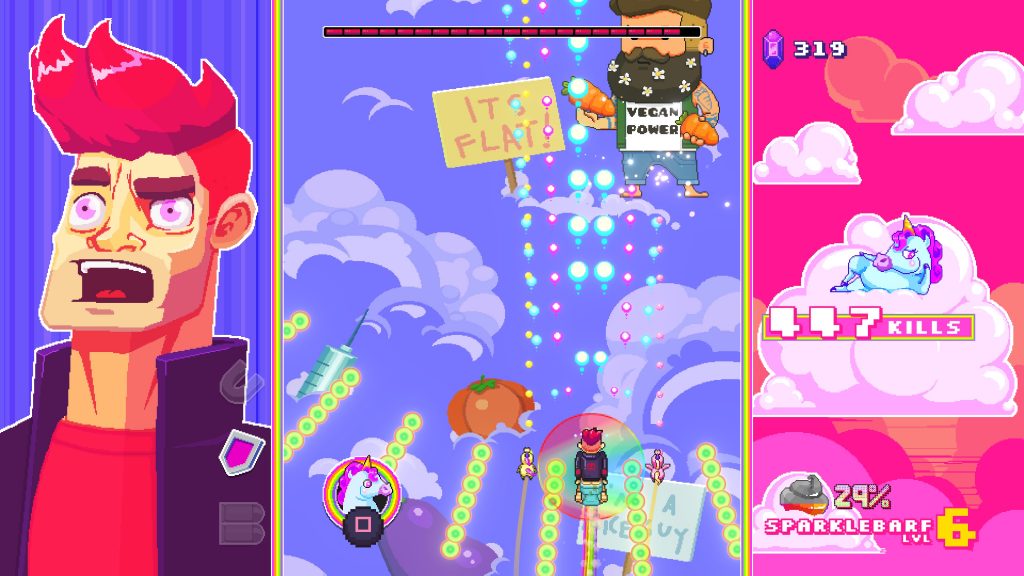 Each level, while being themed differently visually, plays much the same.  Enemies come down from the top of the screen and you shoot them.  Occasionally they’ll drop either a temporary firepower boost or a very helpful shield.  You see, you only get one life and a single hit will finish your game so the shield, which allows you take an extra hit, is essential.  These do drop quite often.

Levels are punctuated by bosses who lay down patterns of bullet-hell firepower.  These vary quite a bit and, for the most part, the only really awkward ones are the spiral patterns which are a MASSIVE BALLACHE in all shoot ’em ups. 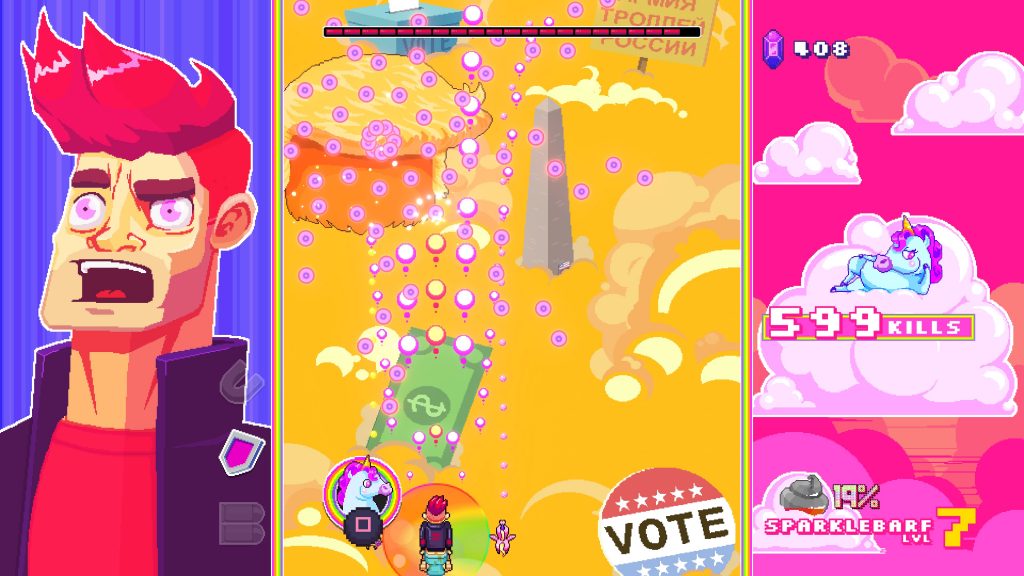 The lack of lives does make the game seem quite challenging at first.  The visuals are very colourful but this makes them a little less clear than we’d like, leading to some peasant deaths as you get blown out of the sky by a group of pixels you didn’t see.  Also, the controls are quite imprecise.  You character almost feels like it has a bit of inertia on it.  Pixel perfect moves are impossible.

The game would be very challenging if it wasn’t so generous with its shield power-ups but it will be quite difficult for shoot ’em up novices.  The difficulty curve is all out of whack though.  For example, the first level was easy, the second was harder, then it felt quite trivial for a while.  The end of world boss killed us on world one but we then made steady progress for a while, with the game feeling all a bit too easy.  Then world four was more challenging but only because of one boss and then world five felt sort of the same.  At no point were the bits between bosses much of a problem at all and it was only certain boss attacks that caused us any headaches. 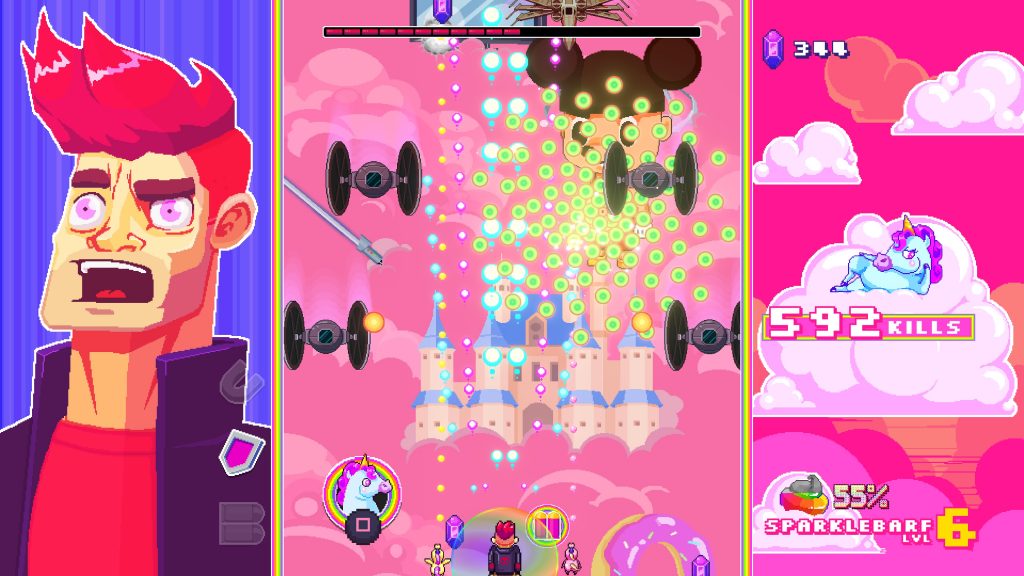 It’s a pretty short game too.  We had it completed and platinumed in one play session.  Your mileage may vary but as with the games we mentioned at the start, this has the same kind of progression.  It’s difficult occasionally but ultimately very doable and all too short.

The retro style presentation is fairly ordinary but the game does throw in a lot of ‘meme culture’ references.  Emoticons, social media icons and weird anime tropes are all referenced as if this game was made by, and for, people who live on Instagram.  The political level even has you battling a Putin-style boss and Donald Trump’s hair.  It’s all very Twitter. 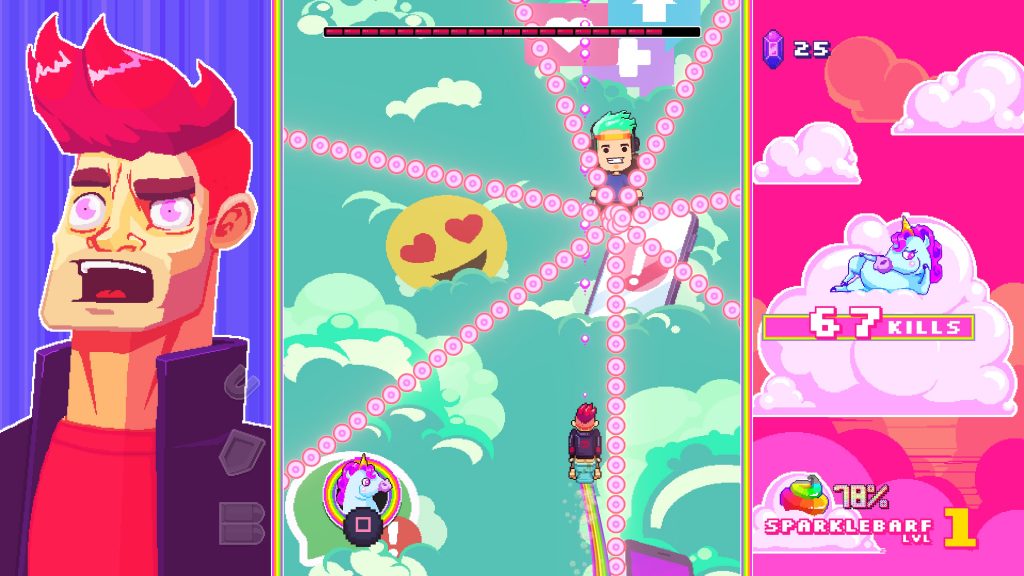 The final world however is modeled pretty much on Disney.  It includes references to Star Wars, Marvel and even a “Nicky Mouse” character.  The references are so blatant, and Marvel are SUCH PRICKS, that we can see this game even getting taken down if anyone apart from us even notices it.

For the short amount of time that we needed to play it, we quite liked Rainbows, Toilets and Unicorns but as with Project Starship and Red Death, an hour or so of retro-flavoured shoot ’em up action doesn’t represent a great investment, even if these games are pretty cheap.  This is fun but you need to be both a big shoot ’em up fan and yet not much of a purist about the genre to really get into it.

Rainbows, Toilets and Unicorns
5 Overall
Pros
+ Quite playable
+ Is fun for a while
+ If you like the whole internet meme culture thing, then you'll find this quite funny
Cons
- Loose controls
- Weird difficulty curve
- Each level seems to play the same
- Very short
Summary
Rainbows, Toilets and Unicorns offers a unique take on the vertically scrolling shoot 'em up genre but spends its very short lifespan telling just one joke and the gameplay is a bit of a one trick pony too.