Already out in the open on the PC since 2016, Rabi-Rabi makes the transition to the Playstation 4. Indie platformers with Metroidvania elements are now ten a penny. Can CreSpirit and GemaYue’s effort stand out from the crowd? 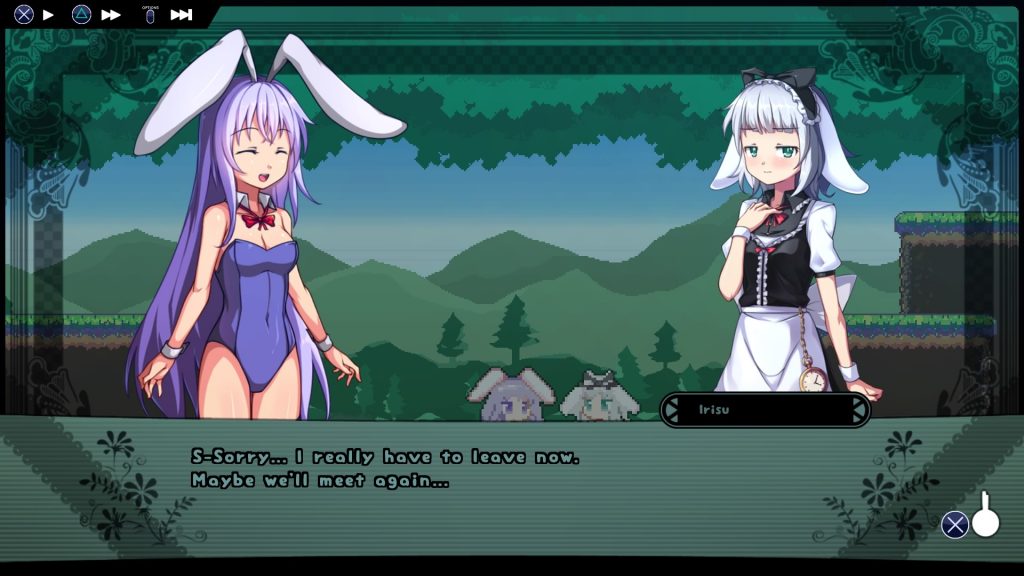 Rabi Rabi is a tale of two companions. You control Erina who is a rabbit turned to human form because of some unexplained magic. Along with solving this mystery your first objective is to find your master who then lands you with the larger, ongoing task of recovering Rabi-Ribi Town’s populous. They’ve all seemingly been captured by some force or become separated. This becomes your main focus for much of the game and it provides ample incentive to explore the labyrinthine map at your leisure. It’s all given something of a playful tone. Erina is a fish out of water in an unfamiliar setting and most of your early conflicts stem from misunderstandings.

It’s presented in a typical pixel art style with dialogue sections given the usual talking head portraits similar to a visual novel. These segments are relatively short and to the point with explanations and motivations laid out well enough to keep you clued up and moving forward. The pixelated look is nothing especially new but the big character sprites are surprisingly detailed, although I did suffer a couple of times from mistaken identity. Unfortunately, your main opposition in Rabi-Ribi arrive in the form of imposter bunny hunters. They wear similar costumes to you and, if you’re in a particularly frantic fight, it can be problematic to remember which set of bunny ears belong to you. 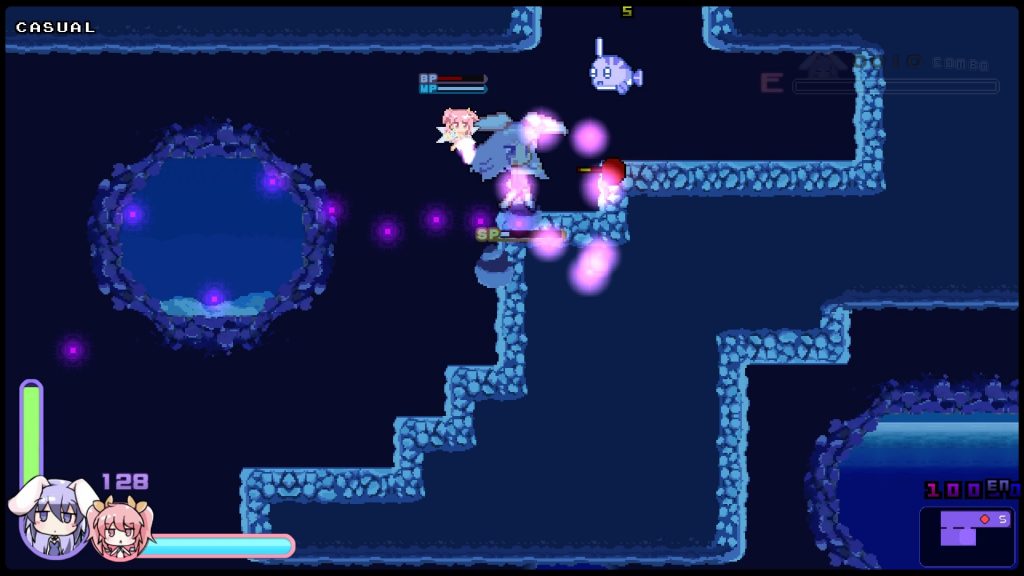 Music enhances the cartoon charm with a fairly inoffensive score that compliments the bright, colourful lands you roam. Boss fights will cause the score to intensify but, for the most part, it’s relaxed and a well chosen score.

Rabi-Ribi is as Metroid as it comes. Through a diverse, two-dimensional world, you will shoot, platform and hammer your way to new areas as you look to rescue the townsfolk. Special items grant you new abilities like slides and double jumps and they assist you in accessing undiscovered terrain. It’s a compelling loop and you can tell it’s a well-designed world. Movement feels tight and controls are responsive. When you know where you’re going, you can arrive there swiftly.

The map takes the graph-paper approach with discovered items being marked on your map. It’s simple to follow and uncharted territory is easy to identify. Warp points, saves and transitions are marked, as well as points of interest. I rarely felt lost in Rabi-Ribi and forward momentum is something easy to gather. Each area is themed with their own set of enemies and hazards. There’s some cross pollination but there’s enough to make each zone feel special. They also interlink often. 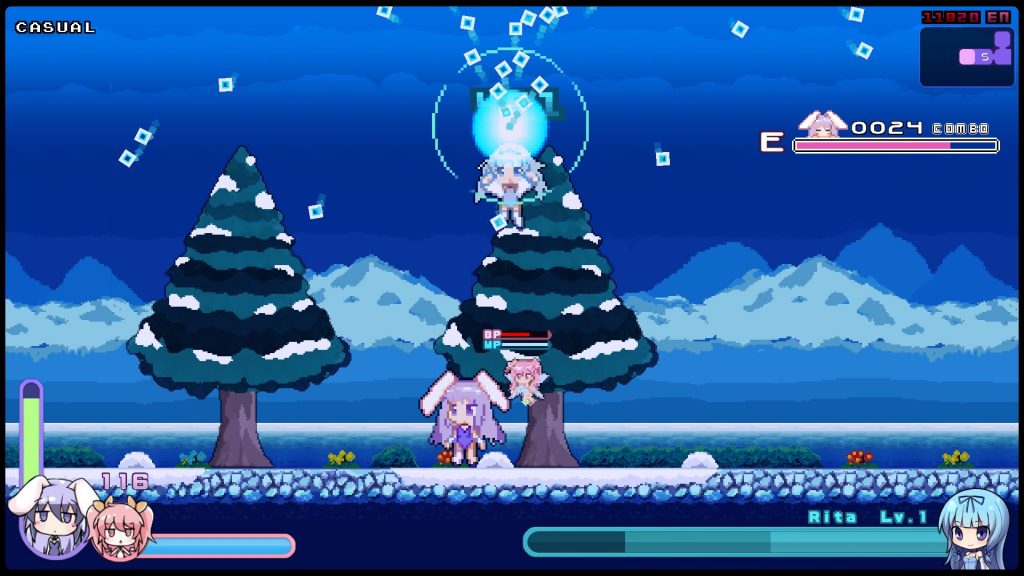 There’s a huge checklist of items and villagers to uncover, each granting their own unique perks. Along with the usual upgrades that improve movement, you have badges to find. These bestow Erina with additional buffs that can improve weapon damage and other stats. The possibility of loot and the abundance of it makes filling out the map such a compulsion. You’re given real agency to power Erina up and experiment with badges to heighten or lessen challenge as you see fit. Whilst this game certainly feels longer than you’d expect, the world you inhabit is packed with things to find.

Combat takes on a melee focus with some supplemental shooting supplied by the game’s starring duo. Ribbon acts as your projectile attacker which is governed by MP. You can switch between magic types and charge attacks for foes that are otherwise out of reach. I find her attacks more useful during boss fights when your adversary has decided to hulk up.

Your standard combat is dished out with Erina’s hammer. You gain additional moves as you progress and persistent use of your weapons allow them to gain in strength. It’s not quite as complex as something like Guacamelee, but it’s involved enough to keep things interesting. You’ll do a lot of it here and, whilst you face recurring foes, they do change their attacks from zone to zone. Conflict can also be negated, once your health regeneration is up to scratch.

Bosses provide tougher, persistent challenges with many guarding captive residents of Rabi Ribi Town. They encompass more bullet-hell aspects than the bread and butter enemies and they’re long enough scraps to feel significant, if a little elongated. Weaving through tight patterns is always rewarding and just seeing the busy spectacle of a boss fight can be enough to break the casual exploration and battles up. 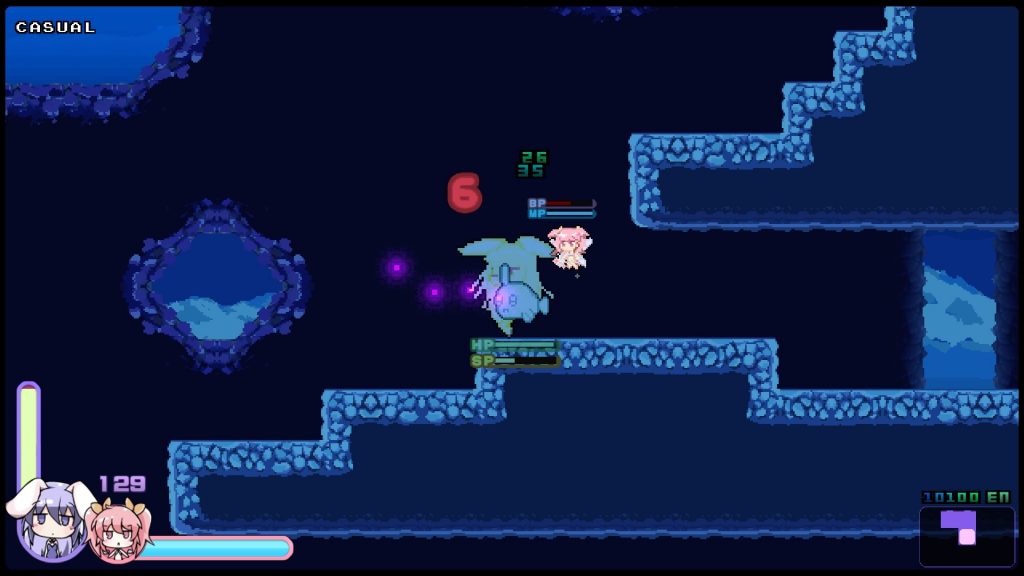 I’ve been somewhat surprised with Rabi-Ribi. The bullet hell doesn’t feel too hellish whilst the cutesy aesthetic adds a bewitching level of charm. The bunny girl premise even manages to be handled with a level of tact which doesn’t descend into a creep-show. Chalk that one down to my preconceptions. There’s a compelling experience ready for those that want another indie shot at Metroid. Rabi-Ribi is a very good one of those.

Rabi-Ribi
8 Overall
Pros
+ Exploration feels rewarding.
+ Charming soundtrack.
+ Plenty of items and badges to experiment with.
+ Bosses offer challenge and spectacle.
Cons
- The lengthy campaign starts to drag in the middle.
- Nonsense plot.
- The cutesy, chibi aesthetic might be too much for some.
Summary
Whilst the cutesy aesthetic might prove too saccharin for some, Rabi-Ribi delivers excellent exploration and combat over a lengthy first run. It will lend itself beautifully to speed runners whilst the plot and interplay between the main duo offer a surprising amount of charm. This is a pleasant, impressive Metroid homage with some nice quirks.