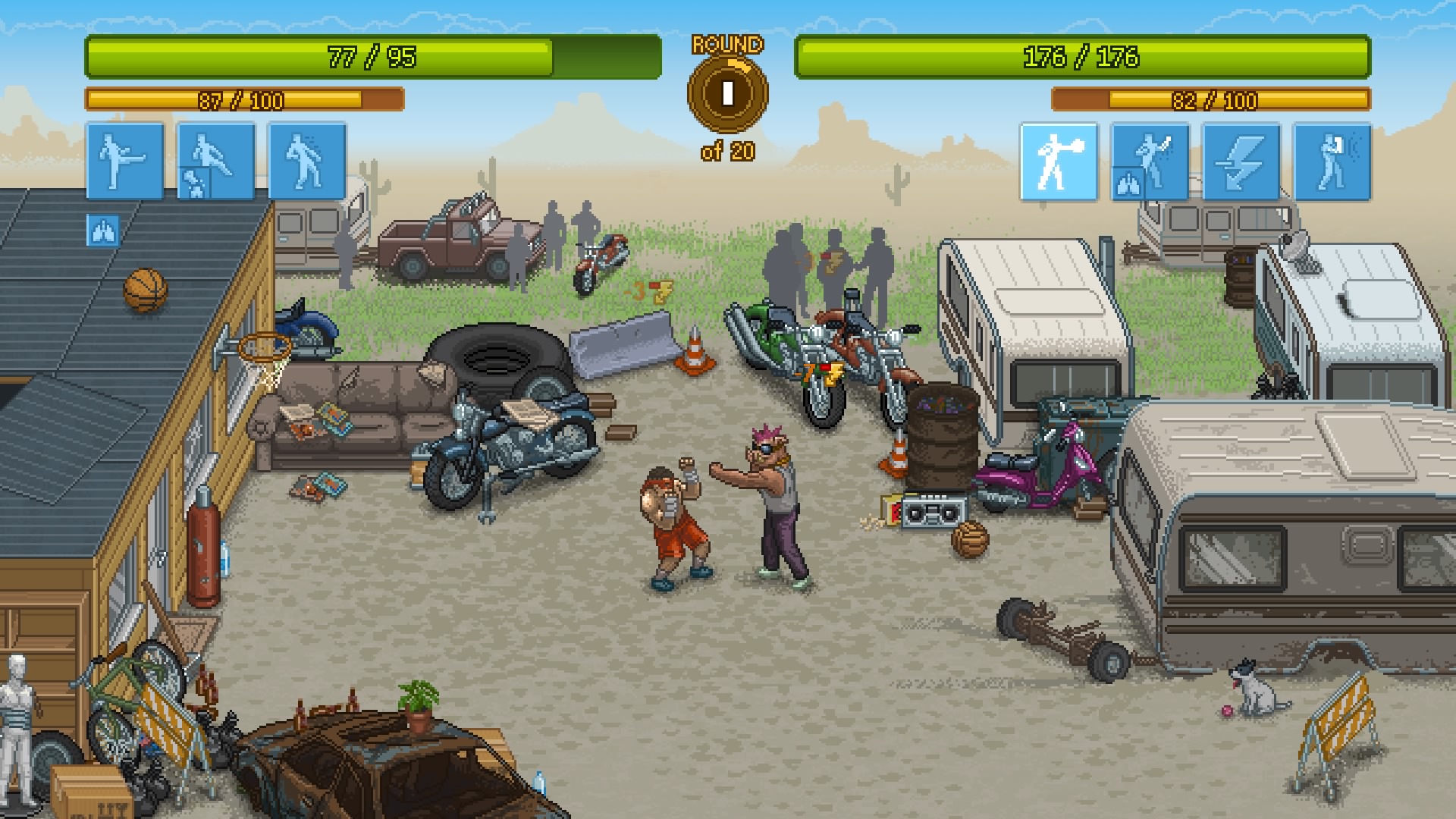 Don’t let those screenshots fool you. While Punch Club may look like an old-school beat ’em up, it actually isn’t that at all. Sure, there’s fighting in it but you won’t be controlling the action. Instead this is a management/RPG hybrid where you manage the life and career of an MMA (Mixed Martial Arts) fighter. If that sounds absolutely nothing like your cup of tea, don’t be quite so quick to judge. There’s a lot to Punch Club that isn’t immediately apparent.

The game sets up the plot where a young kid sees their father, a great fighter in his own right, get murdered on the street. Vowing to avenge him, the kid grows up to be a fighter themselves and you rejoin their story years later when they are living in a little house, training in a garage and about to embark on their MMA career. 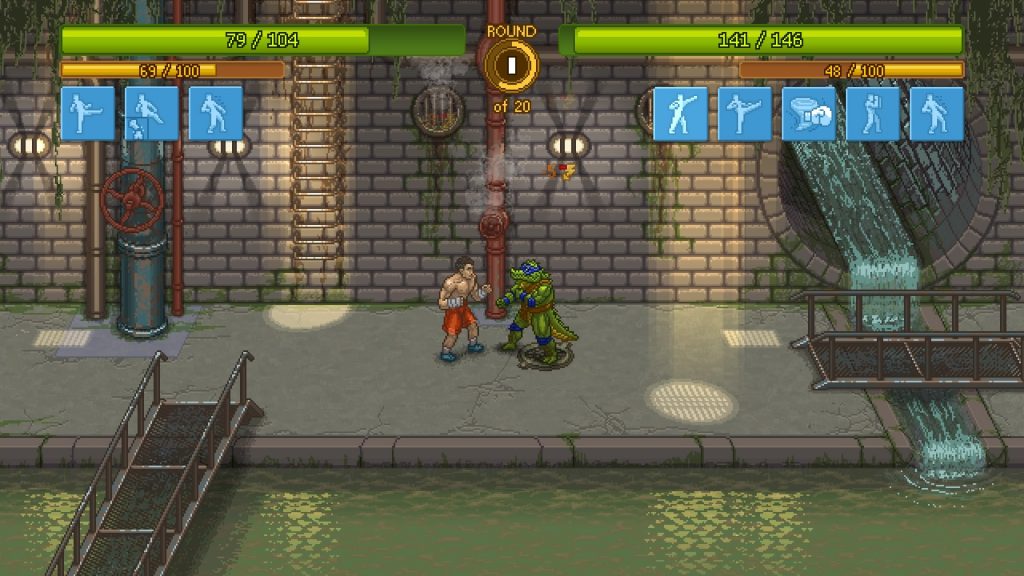 Throughout your career you are introduced to new elements of the game. At first all you can do is train, eat, sleep and work. These competing priorities need to be balanced though. On the one hand you need to improve your skills but you still need to eat and rest and you only have a limited time to prepare for each fight. If your skills aren’t up to snuff, you’ll lose. But defeat will come a lot faster if you’re tired.

This is essentially the crux of the game and as new elements are added to the game, they all provide more options, more difficult choices. For example, you’ll meet a girl and will start dating her. Being in love makes you train better and also reduces your need to feed, but that comes at a price. You need to spend time with her. Her brother will help you train but you’ll need to spend time fixing his car or hanging out with him. Meanwhile, food isn’t cheap and your manual labour job is exhausting and will affect your mood, which in turn affects your training. 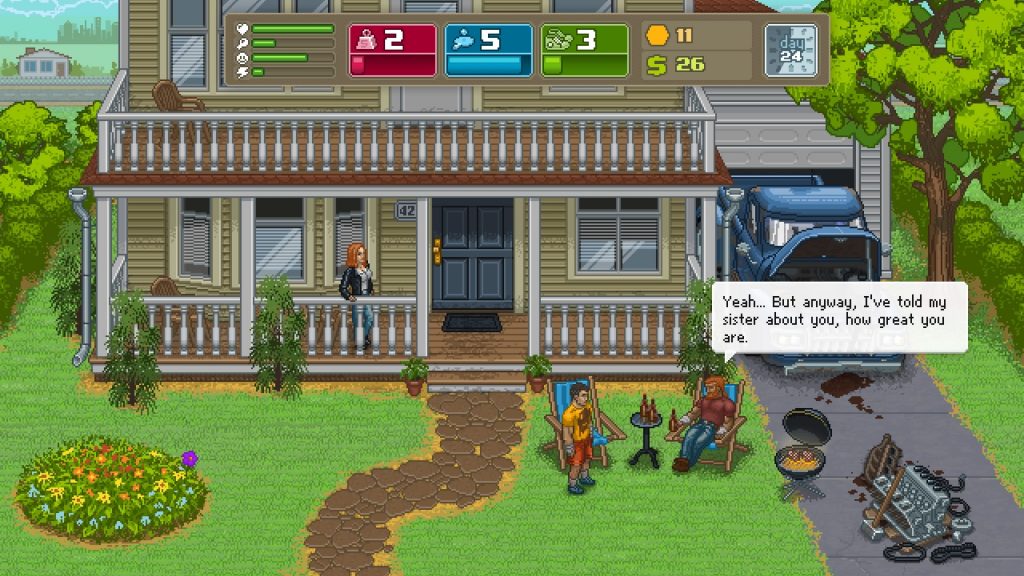 This kind of thing happens a lot and it is very difficult to know what the right decisions are. Likewise, you can concentrate on a legit MMA career or take underground fights to gain experience and cash but at the risk of serious injury. Injuries affect your ability to train. You get the idea.

Training itself is a whole other dilemma. You lose stats overnight and you can’t be well-rounded so you’ll need to decide what sort of fighter you are. I decided that speed and agility would be my thing and ended up not bothering with strength training but that can be a problem when you’re throwing powder puff shots. Also, experience allows you to buy new moves and abilities which appear along branched skill trees. It’s a dizzying array of choices and while I feel like I chose well, the game didn’t really make any of it clear for me.

That said, this isn’t the most complex of management sims and I was able to find my way but I was never sure if I was doing well. Certainly as a fighter I’ve got a particularly salty record with plenty of marks in the L column. Not that I could do much about them. You see, you don’t actually do any of the fighting.  Instead you equip your fighter with a selection of moves and then hope.  You can switch moves and buffs in and out, you have limited slots to put them in, between rounds but that’s about it.

On the whole, it all works reasonably well.  The game is certainly horribly addictive but eventually the progression becomes a grind.  If you don’t train, your stats decline and when life, work, food, relationships and fighting get in the way, it feels like a constant struggle to stay in shape.  So much so that eventually it stops being fun. 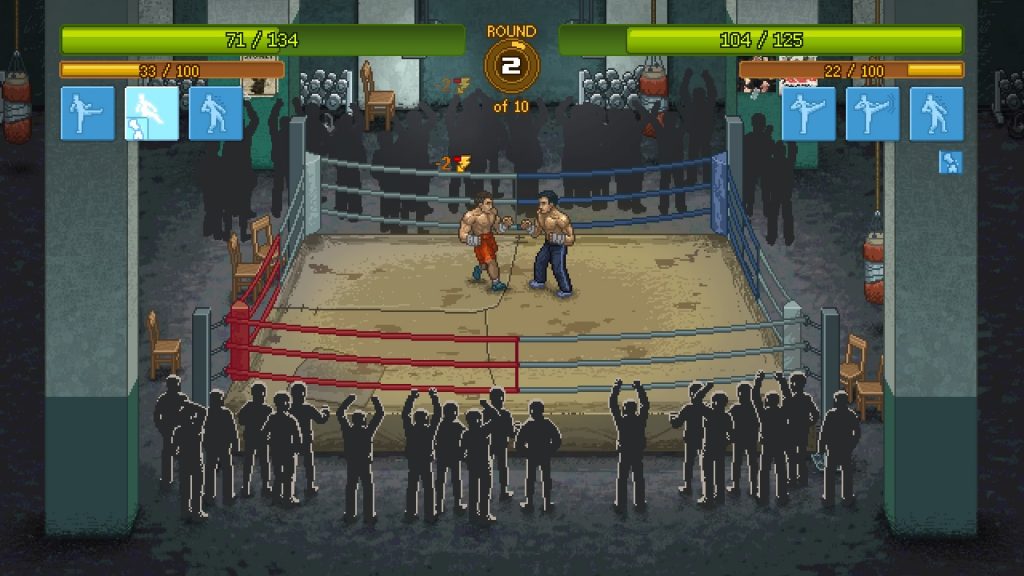 The gameplay loop I got stuck in was training, then eating, resting, eating again, working, buying food, eating, sleeping, eating, talking to girlfriend, fixing mate’s car, training.  All that was just enough to keep my stats more or less level.

If that was it, I’d possibly be hating the game but Punch Club also has a story with various characters to interact with that riff off of all sort of ’80s and ’90s pop culture icons.  From the Turtles to a Tyler Durden rip off, there is a lot to see here and it’s all pretty funny.  The 16-bit-but-good retro graphics really capture the ’90s feel too, although the repetitive chip tune soundtrack soon got on my nerves. 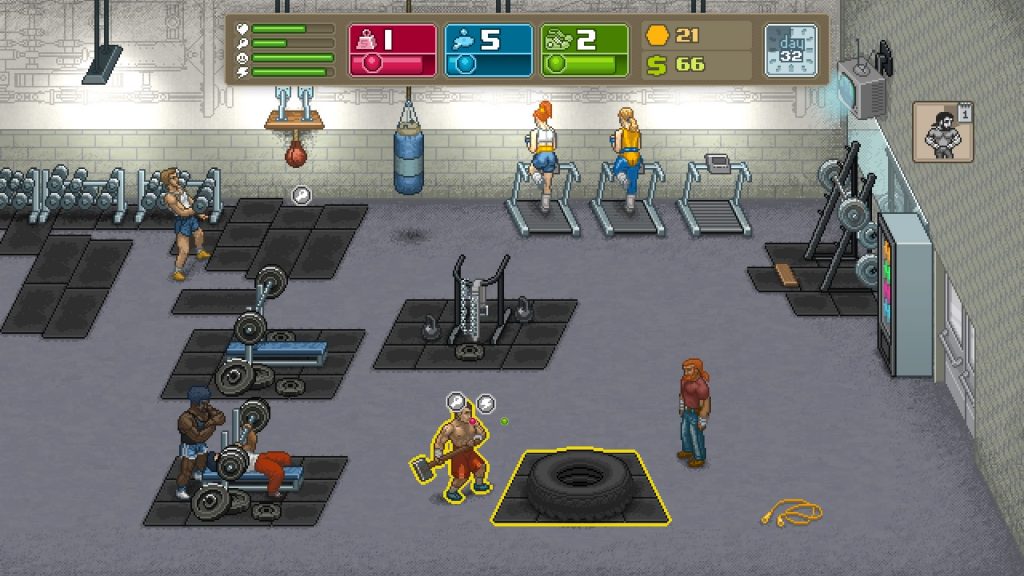 So, do I like it?  Well.  Initially, I was very much into it.  Then I got bored of the slow progression, the endless dilemmas and the lack of fighting action.  Then a few more elements were drip-fed at me and I got back into it.  But now, several hours in, the glacier-like gains I’m making, combined with my career which seems to have plateaued, have somewhat ruined this for me.  The upgrades at this point are prohibitively expensive and don’t even make that much of an impact and I can’t seem to make any headway because of how much life is getting in the way of my training.

Sure, there’s a walkthrough out there that will no doubt tell me what I should do but that’s cheating and this game is already unsatisfying enough.  Addictive, yes.  But frustrating, repetitive and, most of all, dull.  I’m a big fan of MMA and training and I get a lot of the references here so this game should speak to me but I’d rather play EA Sports UFC 2 while someone reads out numbers at me for 24 hours instead.  It’d be much the same as this but I’d be using some sort of skill.

Punch Club
5 Overall
Pros
+ Great pop culture references
+ Plenty of story
+ Initially kind of fun
+ Addictive
Cons
- You don't actually do any fighting
- Progress is slow
- Gets very boring
Summary
Punch Club is a unique fighter management game with a great sense of humour and plenty of '90s style. The gameplay, addictive as it is, becomes punishingly slow and repetitive. They say MMA is a big cause of brain trauma but after many hours with this game, my brain feels like Chuck Liddell has been using it as a speed bag.