Pumpkin Jack has been out since October 2020 on Xbox One and Switch, only just releasing on PS4 which is why we’re reviewing it now. Obvious timing for Halloween there, but we got blessed with Costume Kingdom instead. Yeah. The less said of that the better.

Developed by solo developer Nicolas Meyssonnier and released by Headup Games, Pumpkin Jack is very much beholden to the PS2 era of 3D platformers in both style and gameplay. The very fact that it’s the work of one man for the most part is notable, but we can’t pull our punches on that basis 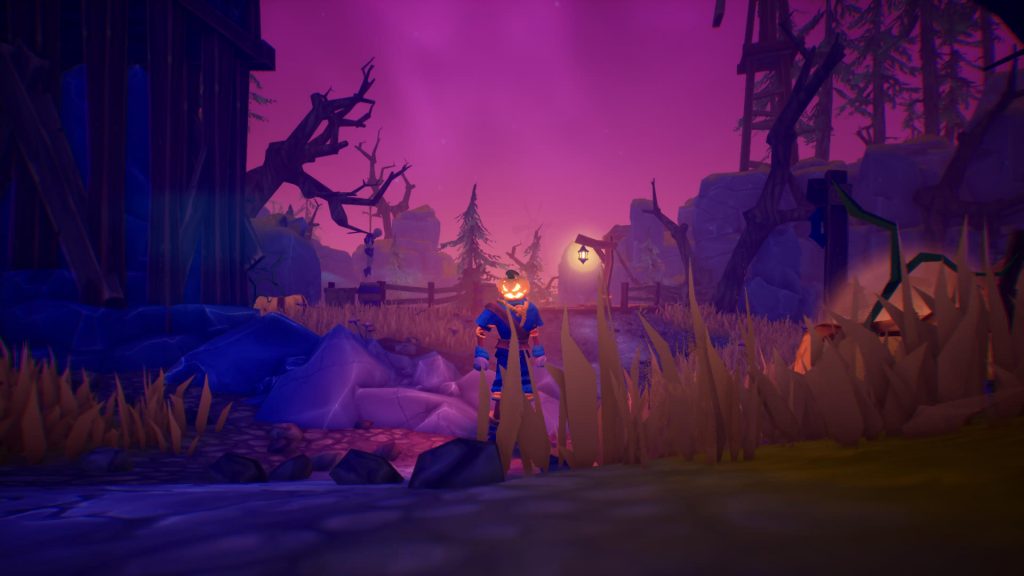 Pumpkin Jack looks like any number of 3D platformers from fifteen to twenty years ago, the obvious comparison being MediEvil especially in terms of tone and setting. Admittedly that was on PS1 in 1998, but the comparison remains. Unlike Renderware or whatever engine was the norm at the time, the flavour of choice here is Unreal Engine.

After a blessedly short prelude, you get down to brass tacks and you’re gently introduced to the game. If you’ve ever played a 3D platformer, it won’t be a huge revelation to discover that you jump with

. Eventually you’ll get an axe with which you can attack with

. The first level does rather ease you in, but that’s to be expected. You’ll soon meet up with a tame crow who you can sic on to enemies with a quick tap of

. He proves invaluable on multiple occasions. 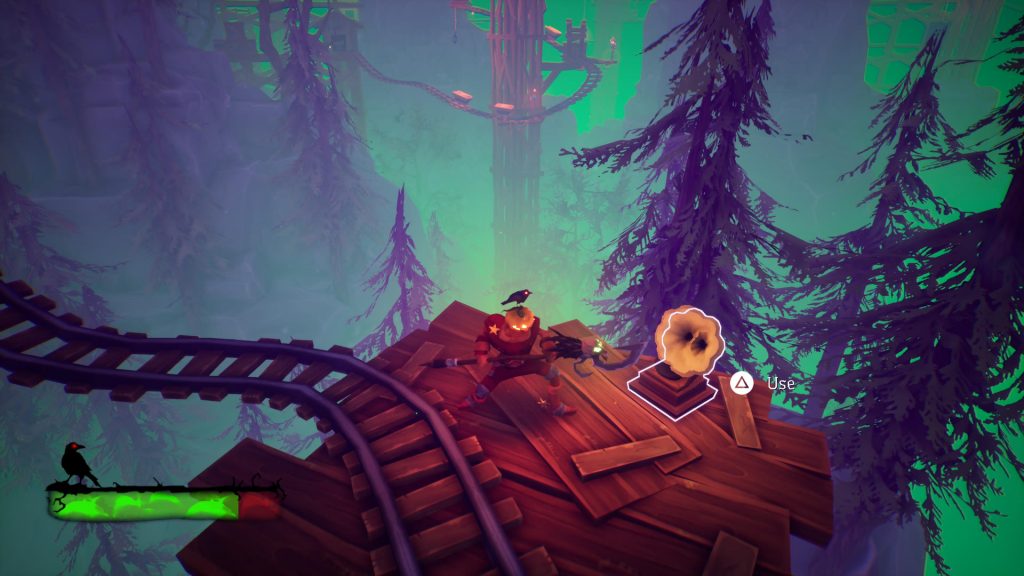 There’s collectible crow skulls dotted around the levels too, ranging from easily found in the first couple of levels to slightly more challenging as you proceed. You’ll find most of them during your initial playthrough without much trouble, but annoyingly you’ll find yourself short one or two most of the time. As well as granting a trophy, you can also unlock extra costumes for Jack to wear.

Additionally there’s one gramophone to find per level. They’re generally off the beaten track but rather than the riffs on classical music that crop up throughout the game, Jack does a weird dance to some techno. At least he doesn’t twerk or floss we guess. It’s a bit jarring all the same. 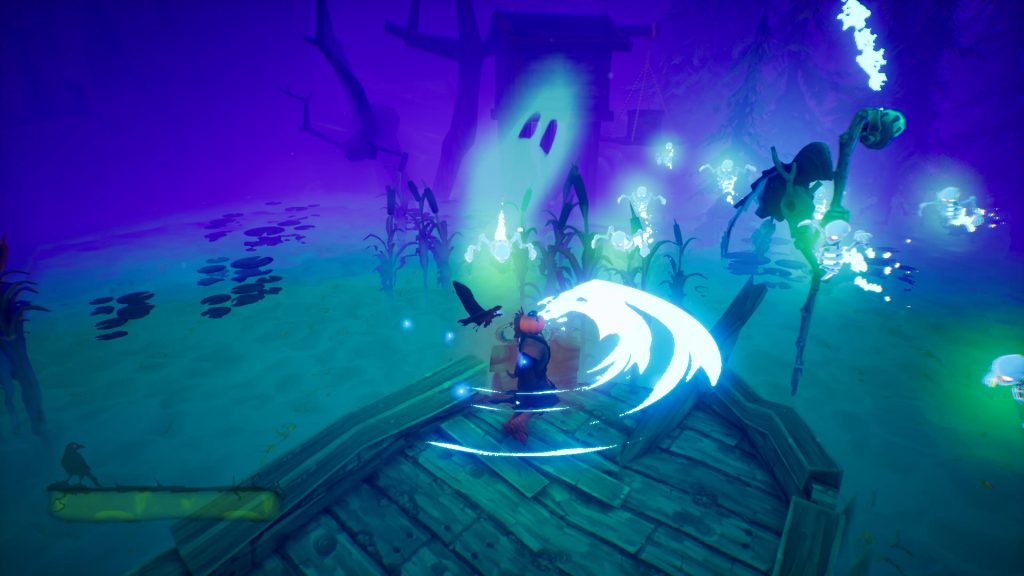 Regards the music, it’s generally Grant Kirkhopian in style and very well done. Any game soundtrack that evokes Rare’s erstwhile composer can only be applauded. Occasionally it does rearrangements of some well known classical pieces, The William Tell Overture being one notable example.

Given the fact that there’s just six levels, the dev does a great job in fleshing them out. The prelude is relatively brief admittedly, but it serves as a fine introduction. After the first level’s jaunt through the fields, you venture into mines, then a swamp, a town under siege, a cemetery culminating in a climactic battle against  the main antagonist. 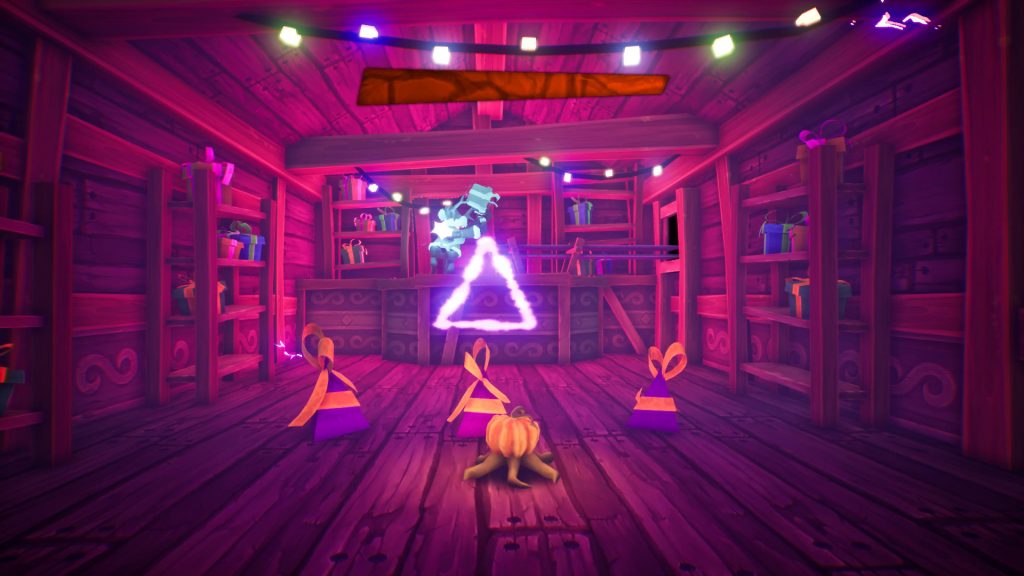 You’ll play a short minigame in each level where your head detaches, one is directing bombs on an obstacle course, just as another is a riff on whack a mole. They’re all quite fun and a nice change of pace. We were particularly relieved by the last one on the final level as we were initially worried by the associated trophy description in thinking we’d have to hunt down snowmen across all six levels. Thankfully this wasn’t the case.

Each level has a boss at the end who you’ll generally not have a great deal of trouble with once you figure out their respective attack patterns. Each has three phases and will succumb in fairly short order. They’re generally fairly fun and only resort to cheap bullshit on occasions. You can generally replenish your health a little as you go too. 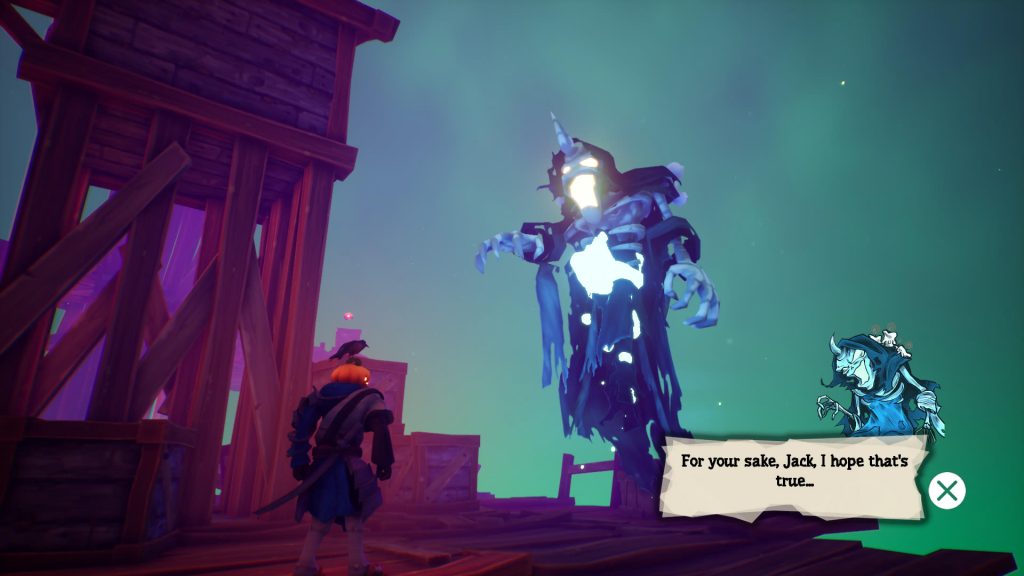 Sadly, the final boss is a huge prick and the design of his encounter is such that we’ve switched off in annoyance at least half a dozen times. The worst thing about that particular fight is the second phase with the holes in the barrier of light you need to jump through. On their own they’re a twat, but combined with the fact the platform you’re stood on gets smaller and smaller as the encounter progresses, you’ll be shit out of luck. Again and again we died and we wonder if the ballache was worth it. At the time of writing we’ve sacked it off and watching Pointless on BBC1 is preferable.

Unfortunately, on occasion Pumpkin Jack lapses into videogame tropes we hated the first time around. Welcome back minecart rides, we’d forgotten how hateful you can be. These are mostly passed without issue, but one section had us replaying again and again due to a wayward camera and not seeing the jump we had to make. Literally on rails sections abound, as do rides on a spectral horse and gargoyle in subsequent levels. 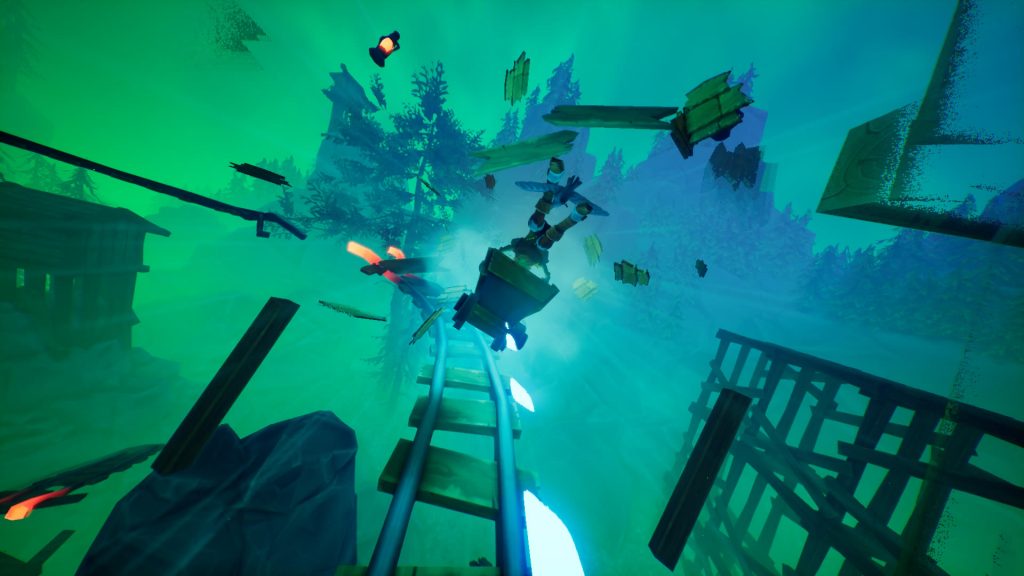 Perhaps it was the pre-release code, but there were a few occasions where enemy encounters didn’t work quite as we’d expect, particularly in the graveyard section. We tried kiting an invisible enemy out when their numbers became too great but upon returning no enemies were there, so the only approach was to top ourselves to reset matters.

In conclusion, Pumpkin Jack is a well done homage to classic platformers of yore. That it was developed by one person is well worth noting. It does lapse into well worn game tropes a little on occasion and the final boss is ridiculous, but for an indie game it’s an impressive effort. Just not particularly essential.

Pumpkin Jack
7 Overall
Pros
+ For a game developed by one man, this is quite something
+ Very evocative of the classic era of 3D platformers
+ Great music
+ Collectibles aren't a huge chore

Cons
- Maybe a little short
- Bordering on generic at times and prone to tropes
- A little glitchy on occasion
- The final boss encounter is a huge prick
Summary
Pumpkin Jack is a well done throwback to 3D platformers of yesteryear. Unfortunately it also has some of their bad habits such as on-rails minecart sections and a final boss you'll hate more than our burning disdain for the music of Simply Red.