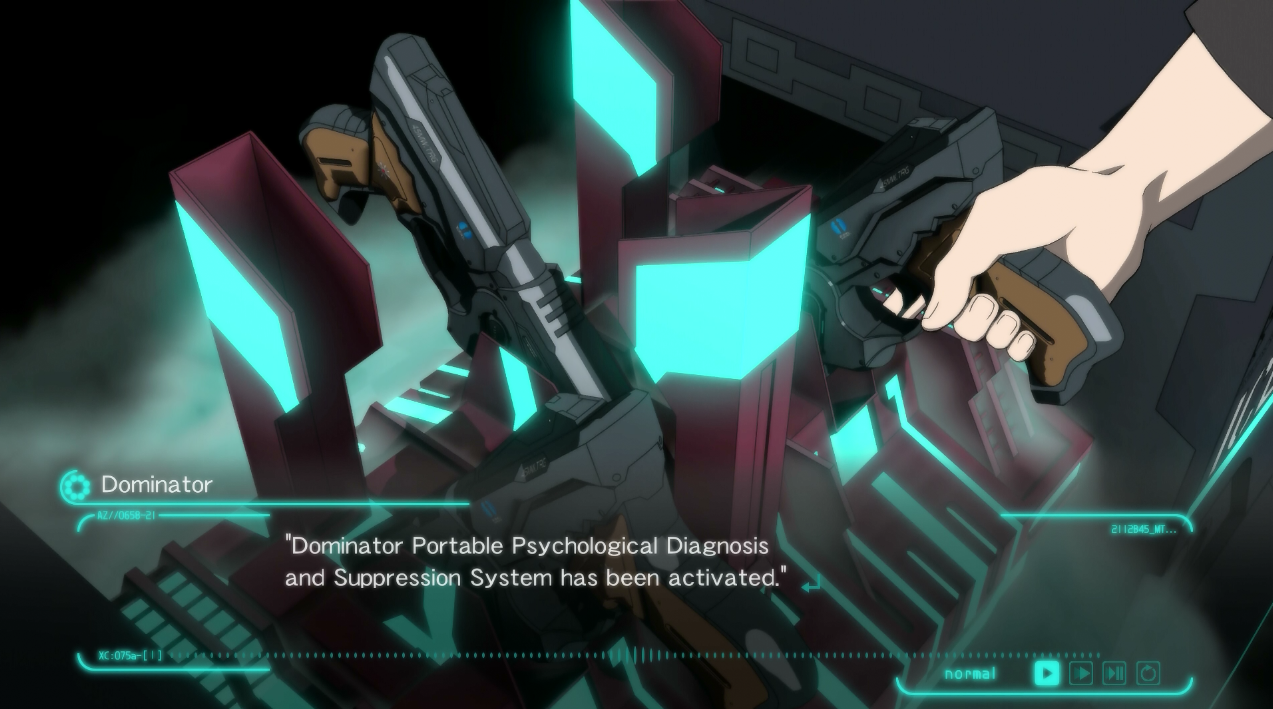 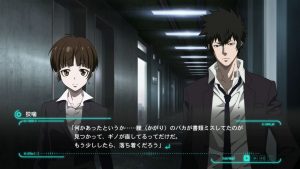 Reviewing visual novels is a tough thing to do. I review games, that involves looking at the story and the presentation but most importantly the gameplay. Visual novels don’t have gameplay, at least not in the traditional sense, so what am I reviewing exactly? I’m just going to give you as much information as I can without spoiling anything and by the end hopefully I can put a number on my experience and you’ll know whether you’re interested in Psycho-Pass: Mandatory Happiness for the PS4 and Vita or not.

Psycho-Pass: Mandatory Happiness is based on the anime Psycho-Pass. It is my understanding that the game’s story takes place at the same time as series one but is its own original story with some unique characters. For those unfamiliar with the term ‘visual novel’ then it’s basically a book you read through in game form. Different visual novels have different amounts of gameplay with some simply having you click through the pages of dialogue with little else whilst others involve making key decisions or even some mini-games.

The concept behind Psycho-Pass is a pretty good one. It’s a sci-fi show where in the future there is a system in place that can scan someone’s ‘Hue’ and determine their state of mind. The more clouded your Hue the more likely you are to become a threat to society and the Public Safety Bureau’s job is to deal with these people before any actual crimes are committed. The more far gone the person the more drastic the action, with the PSB’s weapons unlocking automatically based on the person’s Hue. It either stays locked, allows for a paralysing shot or a lethal shot. Think Minority Report and you have a decent idea.

You have the choice of ‘playing’ as one of two new members of Unit One of the Public Safety Bureau’s Criminal Investigation Division. Inspector Nadeshiko Kugatachi who, get this, can’t remember her past or Enforcer Takuma Tsurugi who’s searching for a person from his past. Both follow the same overall story but are viewed from different perspectives and each character has multiple endings to discover. 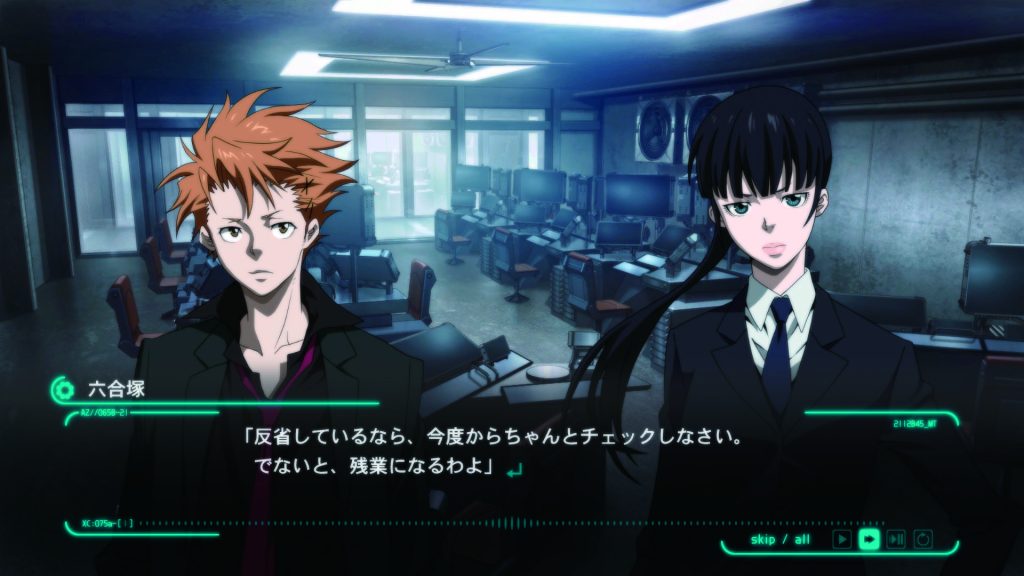 There are a few different cases in the game though all are linked by the overall story thread. The first two chapters are relatively short at about an hour each with the third being much longer but closing out the story. I quite liked the short initial chapters as it felt I was making progress and gave natural stopping points although you can save anywhere so can stop at anytime. The final chapter could have been broken up a little more but overall the game wasn’t too long for one playthrough at about five hours.

Obviously with two characters you probably want to do at least two playthroughs, even though the main story is the same just from a different perspective. Decisions you make along the way will determine whether you see certain scenes and which ending you get so you may want to do even more playthroughs. You can speed through the text with a tap of R1 so you don’t have to read everything every time.

As someone who doesn’t know the anime too well I couldn’t tell the new characters didn’t already exist in the Psycho-Pass universe prior to this game so that is a big plus. There is little in the way of animation unfortunately with just some lip-sync to the Japanese-only vocals. The majority of the game will see you looking at the same 2D character portraits stood next to each other in the same pose, although for some special scenes there are original pieces of artwork.

All in all I quite liked playing through the story of Psycho-Pass: Mandatory Happiness. A lot of translated Japanese dialogue has a habit of being too flowery or talking around things for a needlessly long time whereas that is not the case here. Scenes can still go on for a while and there is a lot of reading with this type of game, obviously, but it is generally well written and, from what I can tell, performed by the Japanese cast. The actual story itself is okay. It can be a little predictable in spots but has enough going on for that not to ruin things. 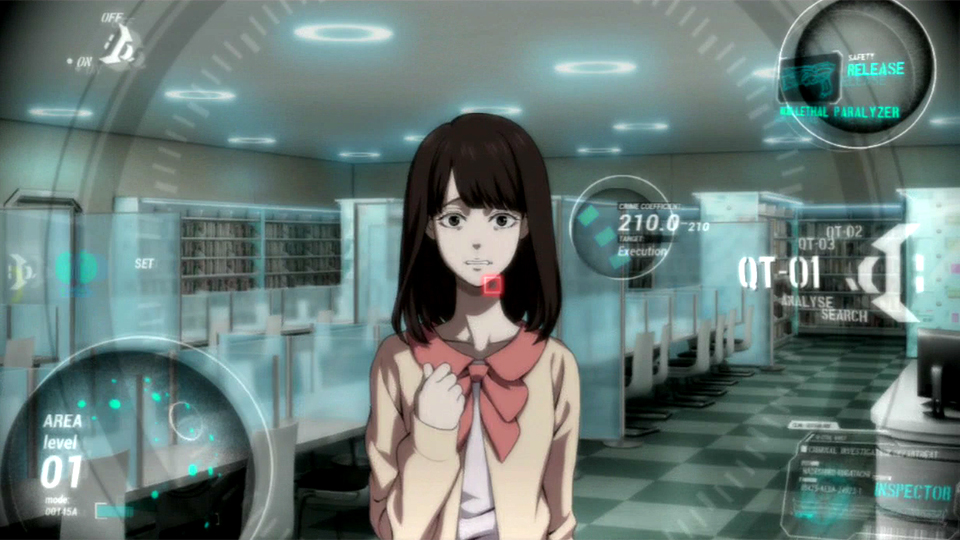 When it came to making decisions if there was a ‘right’ decision I didn’t necessarily feel like the game gave me enough information to make it so was almost picking at random at times. Not all decisions are as important as others as well, with some leading on to the next thing regardless whilst others are incredibly important to how things proceed.

Beyond the main game you have a gallery to view scenes again, hear unique voice lines from the main cast and see clean line drawings of the original artwork for scenes. The scenes you can just view, but the other two you need to purchase with points which are gained by playing a mini-game from the menu.

The game basically equates to the mobile game Threes, where you have tiles with numbers on (in this case multiples of two, rather than three) in a grid and must slide tiles with the same number on into each other to combine them to make a higher number, which you must then combine with the same number to make an even bigger number and so on. When the grid fills out too much to allow you to slide any more it’s game over.

It’s a nice distraction and quite addictive in its own right although the amount of points you need to unlock everything is massive and it doesn’t really have anything to do with the game. There is a free mode but there are also levels which become more and more difficult as you progress which offer bonus points for the first completion so this is the way to get the most points, although it does get very tough as things go on.

So now we come to the tough part. Usually I’d give a score based on how much I enjoyed a game, how much fun was it to play, was it well designed, that kind of thing. Here I thought the story was well written, I’m definitely going to be checking out the anime based on the concept alone, it didn’t outstay its welcome and when I’m doing well at it I like the mini-game which could probably be released cheaply on its own (apart from maybe for legal reasons I guess).

However, as someone who doesn’t normally go for visual novels and prides gameplay over most things I have to personally knock it down a few points just for the fact that there isn’t much to it, although nicely drawn there isn’t any animation at all and the story can be predictable at times. 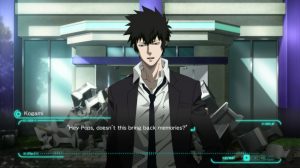 If reading rather than playing sounds terrible then visual novels in general aren’t going to be for you, whereas if you’re open about this stuff or a fan of the genre then you’re limited for options in the West and to my untrained eye this seems like a decent example.

Psycho-Pass: Mandatory Happiness
7 Overall
Pros
+ Well written story keeps everything moving + A good length to keep you interested + Mini-game is addictive
Cons
- No animation or much variety in artwork - Two characters ultimately follow the same story beats - Decisions aren't very informed
Summary
Psycho-Pass: Mandatory Happiness is a stylish and well written visual novel which uses the interesting concept of the anime well. Little variety in the artwork, no animation at all and the two characters' stories being a little too similar stop it from attracting non-genre fans however.