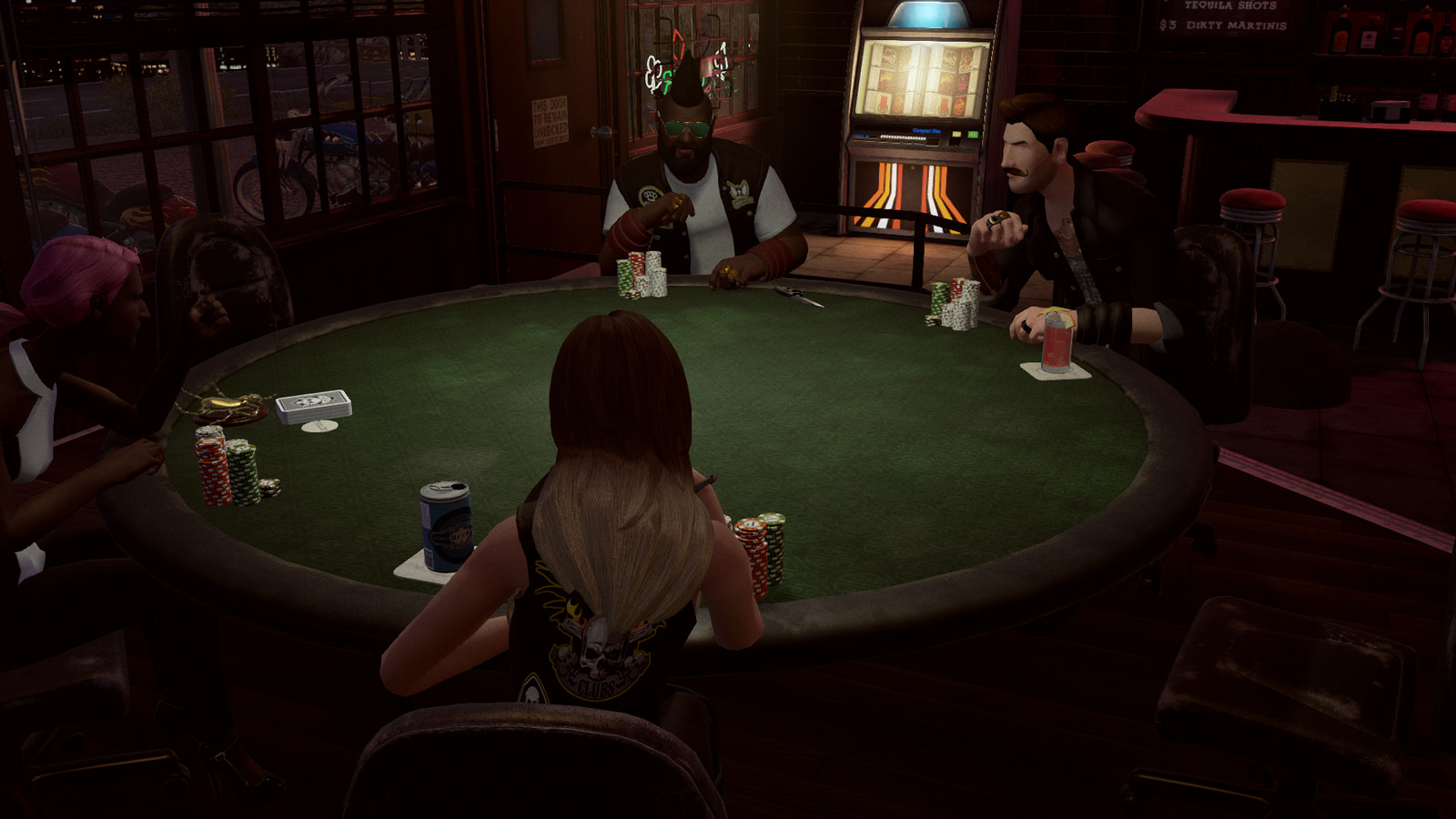 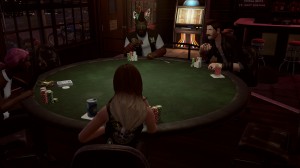 For a lot of people, poker gaming started and ended with Texas Hold ‘Em on the Xbox 360. We all got it, we all played it until we were sick of it. Other poker games came and went but they were pointless. There’s nothing more that needs adding to a poker than just the poker. You can keep your World Series of Poker licensing and all that. Just put your cards on the table, so to speak.

This is a new console generation and there’s probably room for a new poker game and Prominence Poker pretty much delivers what it needs to but it does add some extra stuff in there which may be to your taste, or it might not be.

So, firstly yes. Poker. Texas Hold ‘Em poker. This is pretty much everyone’s default poker variant ever since it got insanely popular about ten years ago and then disappeared off of our television screens forever. I’m not going to explain the rules here beyond saying that each player is given two cards. Then three ‘community’ cards are put down on the table (that everyone can use), followed by a fourth and finally a fifth. With five cards on the table and your two cards, you make a hand of five cards and then you lose all your money, your spouse leaves you and you end up living in a cardboard box and drinking cans of Stella. 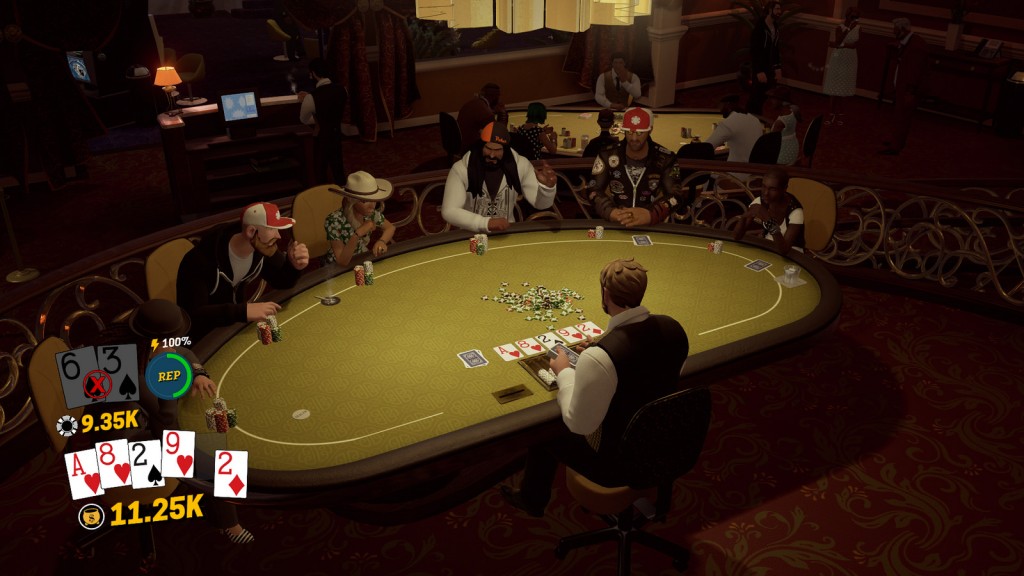 Prominence Poker offers you a safer way to end poker by giving you a heap of ‘chips’ (that’s your money, essentially) and then letting you use it to buy into single player or online matches. You can also spend it tarting up your in-game avatar with new clothes and accessories. In some ways it’s a pretty good system. By limiting your chips, it cuts down on the number of idiots who go all in on the first hand, hoping to take a 50/50 chance of winning it or losing it all. You do get given extra pocket money each day (thanks to the ‘daily cut’) which keeps you in the game as well. So it’s all good. Apart from one trophy that requires you to stack up a ridiculous two billion credits. Yeah, good luck with that.

The game is quite heavily into customisation. The idea is that you keep coming back to earn that new jacket or whatever so that you look like a high roller in those online matches. Or you can buy them using actual real money. You know, like a fucking idiot. The choice is yours though, especially as the game itself is free to play. Which is a smart decision by the publishers as the original Texas Hold ‘Em initially to make it catch fire. 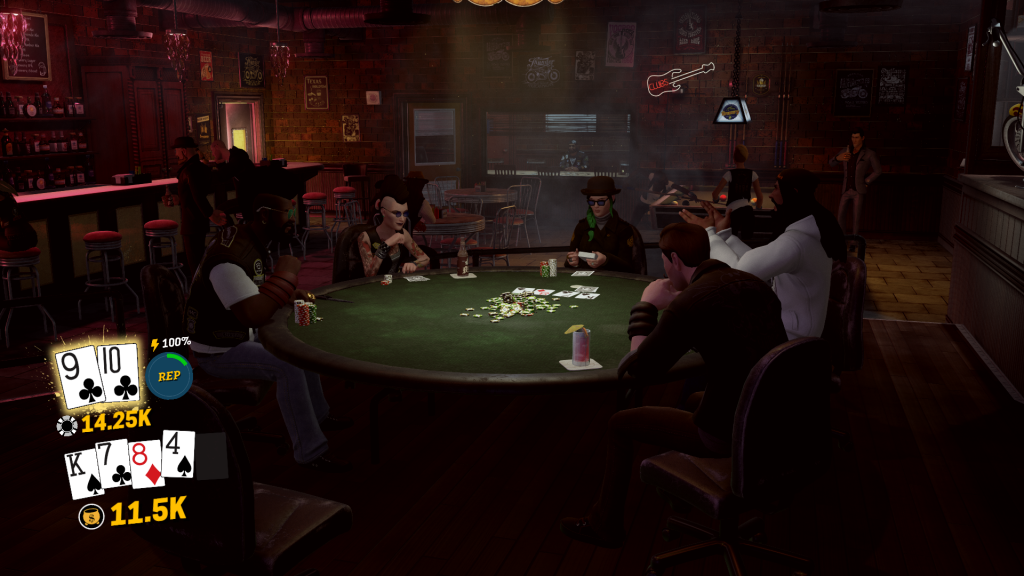 So, you’re probably realising that Prominence Poker does actually try to have a bit of personality. Aside from playing dress up with your avatar, you also get to try to fake people out with physical gestures (that no-one will notice because they’ll be too busy looking at the things on the screen that matter). On top of that, there’s also a little bit of a single player plot where you take on various bosses and their henchmen in sleazy looking locations around the fictional town of Prominence.

This is all good, but I can’t help miss the ultra clean stylings of Texas Hold ‘Em. Eventually all the gangster styling, gestures and clothing just gets in the way. Really, you just want to see your cards, the table and the amount of chips in play and while that is all here, it’s all a bit too messy. The graphics are ugly too. The game looks ugly in that sort of Saints Row 4 chunky kind of way. 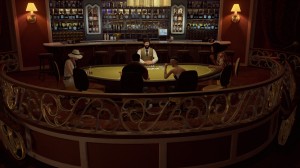 The controls could be a little better too. You rotate the analog stick to change your betting amounts (with modifiers on the L1/R1 buttons) and while it works, it’s not as exact as I’d like. Texas Hold ‘Em did it better. I can’t even remember how it did it but I do remember that you never once had to think about the controls on that game but that said, these controls aren’t going to slow you down that much. I’m just nitpicking because, when it comes to the poker games, there’s not much you can really have an opinion on.

So, overall it’s free and it plays a reasonably good game of poker. The online matches are simple enough to get into (you can sometimes end up in a lobby that isn’t going to ever start and you need to back out but that’s rare) and the people playing it don’t seem to be absolute twats for now. Prominence Poker is worth a look.

Prominence Poker
5 Overall
Pros
+ If you want to play a poker game, this is one + If you want to play a free game, this is one + Customisation stuff is alright + Limited chips help keep out the pricks
Cons
- It's a bit ugly - Interface could be better - Poker is so 2008
Summary
Prominence Poker gets two things right. It's free and it knows the rules of poker. It's a serviceable poker game with a focus on online play and player customisation. What it probably needed to do is concentrate on giving players an uncluttered interface but instead it's all about the custom suits and silly hats which is odd given how ugly the game is. But it's a poker game and it isn't going to offend anyone and the game has an odd self-confidence about it. It may be bluffing though.