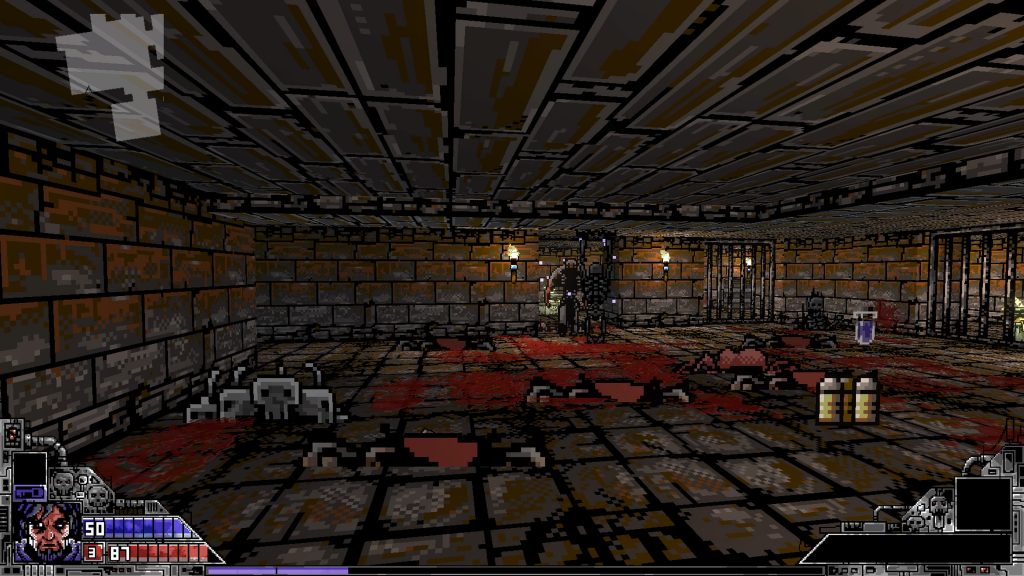 The classic FPS train keeps rolling. It wasn’t long ago that we were talking about Doom Eternal and Ion Fury, both of which led the charge for retro flavoured FPS gameplay, utilising either a time honoured franchise name and carrying things forward or by digging up old technology and making something new, yet familiar. There is no need to go over covered ground again, you only need to click through a couple of pages on this hallowed site to find these reviews, such is the way of trends.

Project Warlock developed by Buckshot Software is the next in series of these call-back games and instead of relying on retro engines or a big name to continue a legacy. Instead, this time the game leans more into loving homage territory, incorporating a ton of tropes from early nineties games like Doom or Hexen, while carving a new storyline and introducing some new considerations of its own.

The homage factor is immediately felt when starting Project Warlock for the first time. In this, the narrative is incredibly sparse. All you need to know, is that you are a warlock and you are on a mission to destroy all evil that dares stand in your way using your combination of spells and modern-day weaponry. It’s classic schlock that should be immediately familiar to anyone that had a pulse in the nineties and for my money, this makes Project Warlock all the better. While a good story can elevate a game like this, a bad story could easily just get in the way. Relegating this to end of episode text crawls kept me from focusing on that and instead on the fun I was having with the game-play, much like I used to with pretty much every shooter from my formative years. 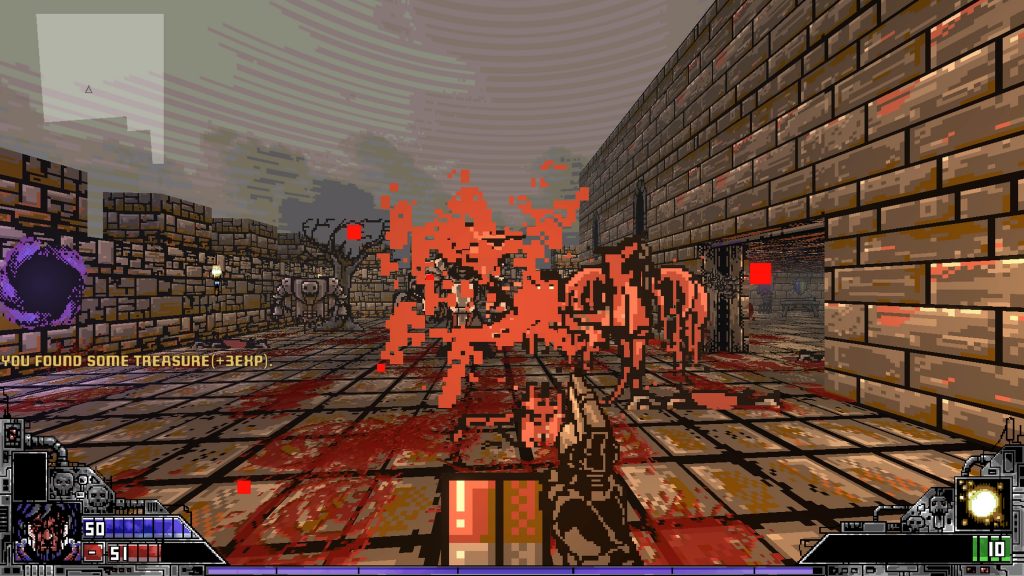 Progression through the stages of Project Warlock carries forward the familiar feeling action, with movement and shooting harking back to the first shooters that had little to no verticality. You move very much like you would in Wolfenstein, with levels sticking with a single horizontal plane with the level design consisting of mazes with red, blue and yellow doors gating progress. In motion, it feels fantastic, much like the recent Doom 64 remaster that made it to PS4. Oddly however, Buckshot Software has offered up a modernised right stick free aim mode as default which feels strange, but you can change this easily enough in the settings to lock vertical viewing to make the game-play feel more refined.

What makes Project Warlock different is in the options provided to the player. In the beginning, you are stuck with a meagre set of weaponry ranging from the melee axe, a knife which can either be thrown or be used to poke away at enemies and a staff which shoots beams of magic, using mana as ammunition. These are pretty weak at first and to start with, things can seem a little dire as mana isn’t always the easiest resource to find and relying on too much melee can often result in a quick death when it comes to tougher, hit-scanning enemies. Thankfully, it doesn’t take long until the more modern, conventional weaponry like pistols, shotguns and Uzi’s start appearing. When they do, the game offers more options to the player, giving more to rely on as enemy count gets larger.

The early difficulty is not only dictated by arsenal however, Project Warlock does not pull its punches as an experience and follows a very classic template. On the difficulties above casual mode, you are set out into the world with only three lives or less and are expected to clear through episodes of around ten-twelve mini levels each that increase in difficulty as you progress. Lose all these lives and it is game over, sending you right back to the beginning of the episode you are attempting to clear. This is a problem at first as there are many factors that are stacked against you. 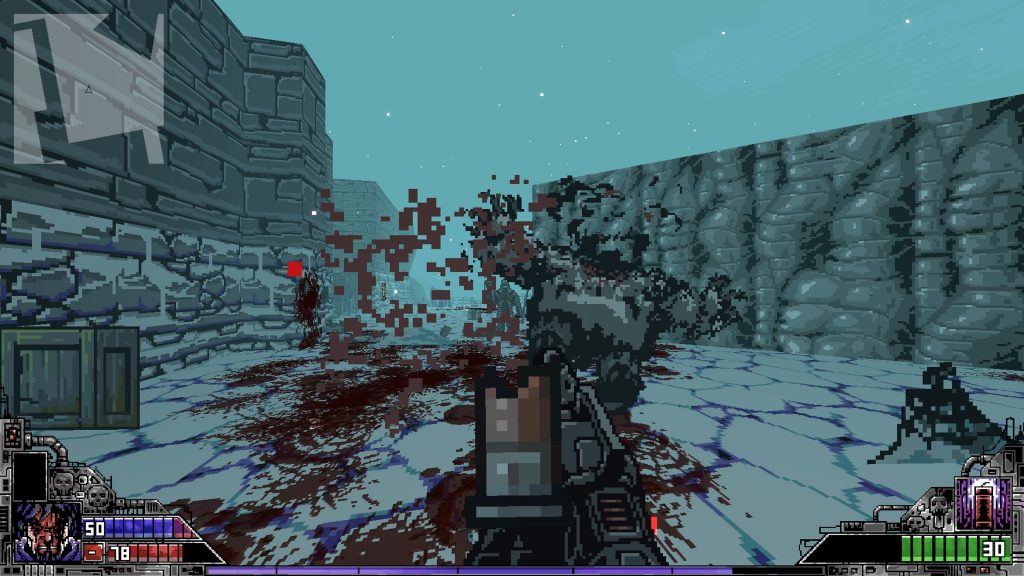 Not having a more varied weapon list is one of those, but not having as many upgrades via the RPG-lite system is another. Through each level you can find unlock points which build your core stats and contribute to allowing alternate firing modes for your weapons and spells. When this does get going (usually after a few deaths) everything opens nicely as it becomes easier to hold your own against the onslaught of demonic creatures throughout each stage. There are some other niggling factors that come into play with this.

During my playthrough I encountered issues with the weapon wheel and automatic switching of weapons when the ammo run dry in my gun of choice. All to often the weapon auto-shifted to the dynamite, a weapon that is deadly to both demon and player alike when used in confined spaces. When this happens, those three lives melt away quite quickly, especially if your trigger finger is itching from the last barrage of bullets you were unloading. The aforementioned weapon wheel is also not the most responsive thing in the world, the action during weapon selection doesn’t freeze, so it becomes a big nuisance when trying to change over to a weapon that has some ammo left. As a note, Buckshot have also noticed this after playtesting and contacted us while I was writing the review and mentioned that they have a fix on the way, so this shouldn’t be a problem for much longer.

The reward for perseverance is made greater by the reward of seeing each new episode as they unlock. As previously mentioned, Project Warlock is not burdened by a large overarching narrative or thematic consistency that modern games strive for. This allows for a wide range of locales and enemy types that would otherwise be considered disjointed in other, similar experiences. My time with Project Warlock took me from a medieval dungeon-like area to a secluded lab facility in the frozen tundra (very much like the one in John Carpenter’s The Thing) then to ancient Egypt and beyond. 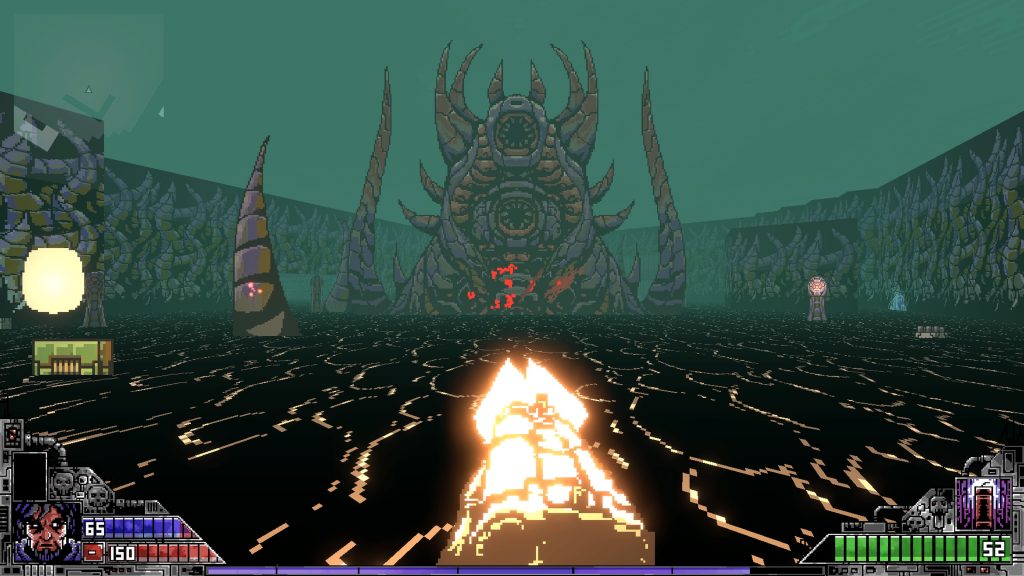 This variance not only highlights a desire to be different, but also the inventiveness that Buckshot Games have put into Project Warlock with each episode featuring a new bestiary of creatures to fight, different world assets and more. This is all beautifully realised both graphically and audibly thanks to the stellar visuals and soundtrack. Buckshot Software have done a great job of making each level feel lived in and not recycling enemies for ease results in levels that feel thematically lived in with some of the best creature designs I have seen, from the harpy demons in the medieval stages to the glacier creatures that stalk you through the frozen tundra.

All of this contributes to making Project Warlock feel like a game that looks and feels like a retro shooter but adds in modern elements that would otherwise break the hardware that would have run this type of game in the past. It’s the right level of modernisation in a retro inspired title that I have seen to date and the kind of balance that most indie-devs should strive for as it is all too easy to go one way or the other. Overall, it’s a great homage to the classic games of yesteryear and one that should be an easy win for those who are looking for their next classic Doom style fix.

Project Warlock
8 Overall
Pros
+ Varied, inventive enemies that fit the overall stage themes well
+ Solid gameplay hook, with enough customisation to keep things interesting
+ Nostalgic in all the right ways with carefully placed modern elements
Cons
- Enemy placement can seem a bit unfair at times
- Very unforgiving at the start
- Some gameplay wrinkles to iron out, mostly to do with weapon switching
Summary
Project Warlock is a welcome surprise. Buckshot Software have pulled off a rare feat by making a retro inspired game that is not overburdened by modernised elements or oversimplified for the sake of a pixel art style. The gameplay is familiar yet refined and the overall package is sure to tick the boxes of many a classic FPS fan thanks to the inventiveness of the levels, creatures and RPG-Lite customisation.