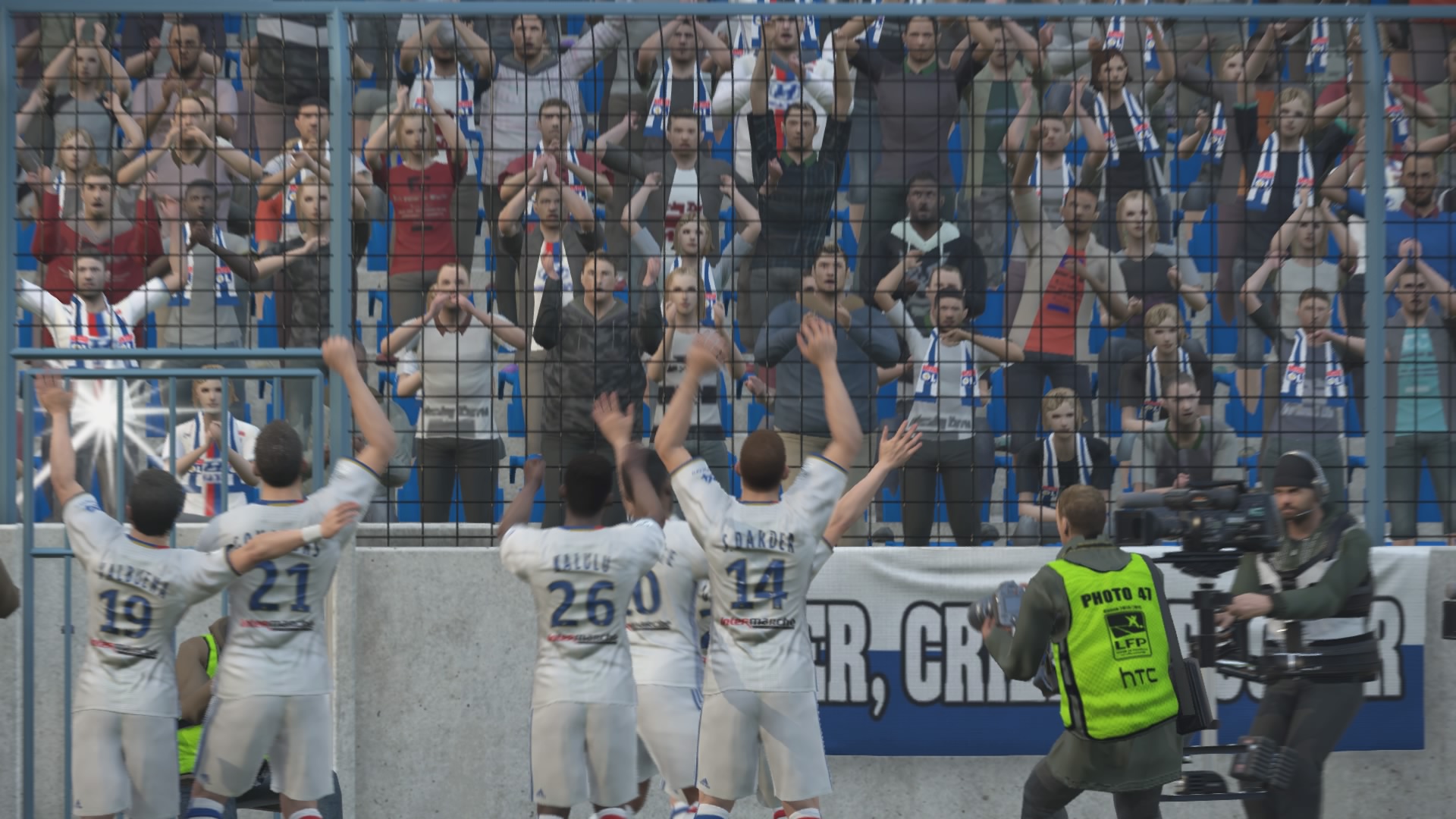 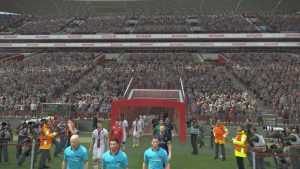 The big changes touted this season relate to the game’s adaptive AI. The theory is that the game learns from your traits and attempts to combat them. In practice, it’s working with the opposition doubling-up on threats and closing down quickly. It’s a dynamic system that mimics the reality of the sport whilst not quite leading to a rock, paper scissors scenario. Rest assured, stronger players can persevere against it, but it does allow for some varied tactics. Across the board, the AI’s been made tougher to deal with. They don’t give up space easily whilst they’ll try to thwart you with some smart defensive pressure. It’ll feel like a struggle to begin with but it ultimately makes success feel more rewarding. They’re not bulletproof and will give you opportunities. Its your prerogative to make them count. 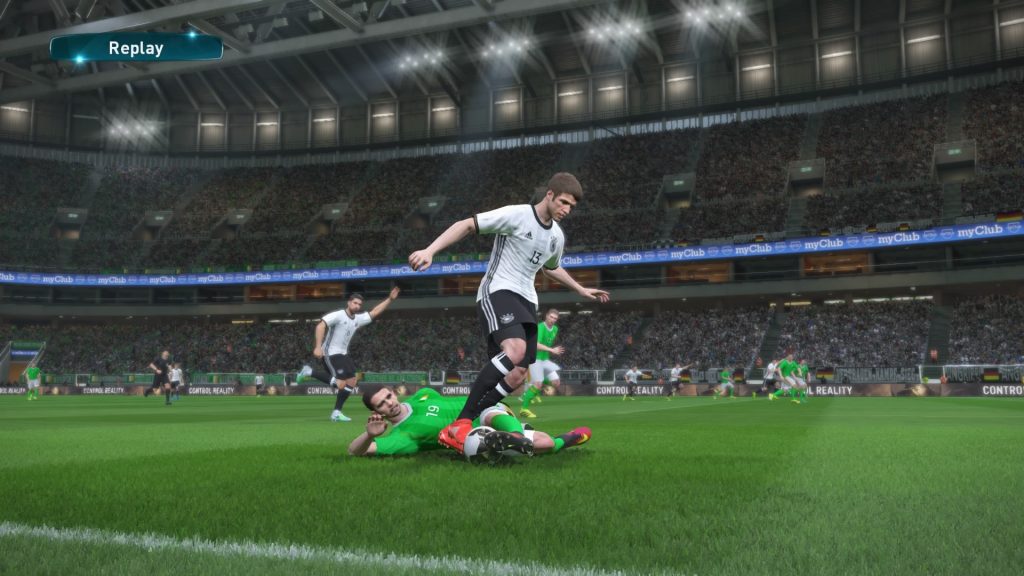 They’ve given the game a slicker feel. It extends to the passing which feels swift and intuitive. Shooting feels consistent and there’s a great sense of improvisation that permeates proceedings. Players look like they’ll gamble and compete for more, leading to some interesting assists, last-ditch tackles and finishes. It all feels more physical this time around, although it’s not overbearing.

Visually, the Fox Engine provides some good animations and weather effects whilst not straying too far from last year’s framework. Dynamic weather conditions remain something to consider during the course of a match. The vanishing spray marks a debut for the series which is a nice cosmetic touch for set pieces. Its an engine that does faces and detail fairly well and it runs at a smooth framerate, although there’s a curious obsession with motion blur which breaks the immersion a bit.

As far as the presentation goes, menus have been revamped a little. It’s still a tiled outlook but they’re easy enough to navigate and look cleaner than last year. Commentary is provided once more by Jim Beglin and Peter Drury. There’s a fair few reused lines but they do make some interesting points and Drury retains his shouty enthusiasm. The crowd noise remains a little sedate there’s some god awful licensed tunes but the usual Champions League and Copa Libertadores licenses return. La Liga fans will be miffed their license has fallen by the wayside in favour of the Chilean top flight but it does offer more teams to play with.

Konami have secured partnerships with the likes of Liverpool, Barcelona, Dortmund and others to secure their player likenesses, kits and stadiums, although the improved Anfield is forthcoming via a patch. Licensing has always been an issue for the series but, at long last, option files make a return. Last year’s image import was a decent, DIY response but now it’s a simpler, smoother process. Just find a file from online, find the right menu option and import the lot in bulk. Expect the community to put together some stellar patches in the coming days and weeks without devoting hours to it yourself. 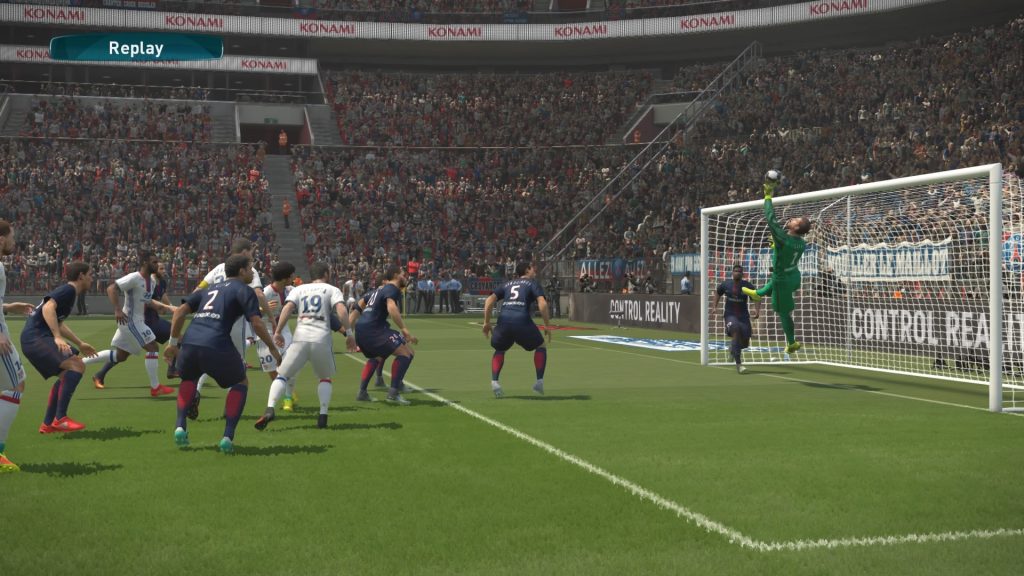 There’s no new modes to speak of but the Master League has been given a few more little tweaks. No team is off limits now and the stat-tracking from last year is presumably fed-back to help the adaptive AI trigger from match-to-match. The persistent run of games should do that system justice and keep a long-running campaign fresh. You can offer your players new contracts at any time, rather than waiting for the transfer window.

The online experience is somewhat mixed with matchmaking taking anywhere between 20 seconds and several minutes. At best, you get a respectable representation of the single-player serving and, at worst, you’re served a curious farce. Your mileage will vary but I’ve never honestly found Pro Evo online to be a wholly consistent time so, in that sense, the trend’s not been bucked. 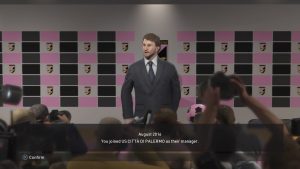 Konami’s managed to improve significantly over last year’s effort with some really clever additions to the AI. It ups the challenge whilst delivering a more intriguing on-pitch experience. There’s not huge upheaval elsewhere but the improvements in how the opposition plays works its way into so much of your time with Pro Evolution Soccer 2017. It feels genuinely great.

Pro Evolution Soccer 2017
9 Overall
Pros
+ Outstanding AI that's a real challenge to play against. + Fluid, satisfying gameplay. + More tactical options at your disposal. + Players retain that feeling of all offering different threats and talents.
Cons
- Online remains a spotty experience. - Obsessive use of motion blur. - Referees seem a little .... mental. - The licensed soundtrack is not for me, Clive.
Summary
What Pro Evolution Soccer 2017 manages to do is make last year’s excellent effort feel out of step. The improved AI gives the matches a more dynamic and tactical edge and offers you a real challenge. The presentation still feels like something stuck in the past and the motion blur feels like an odd aesthetic choice but the gameplay on display is second to none. It’s the best the series has ever been and that’s a seriously high bar to surpass.