Post War Dreams is a slightly strange name, one that makes you think this particular run and gunner will have some sort of emotional content to it and the game’s blurb does talk about it being a “story-rich” affair but this 2.5D shooter isn’t a game that is rich in plot beyond the fact that you’re a guy who is trying to survive in a war-torn USA and occasionally you begrudgingly help people while sounding like you’re putting on your best ‘I’m Batman’ voice.

The game comes from one man developer Pulsetime Games AKA Baris Tarimcioglu and while he might be fairly good at graphic design, it is apparent early on that he needs to hire better people in almost every area of the game.  It all starts from the main menu which is ugly and poorly designed.  The words you ‘highlight’ aren’t highlighted at all.  Instead the one that is selected will just have a splash of dark red on behind it.  Guess what colour the title screen behind it is.  Yep, red.  He even puts the words on the dark red side of the screen.  For some reason the game defaults to ‘New Game’ which is the option that will eradicate your save file if you’re not careful.  There’s a ‘continue’ option and an ‘options’ menu that lets you change the brightness, some audio settings and lets you see the control layout via one of the worst graphics I’ve ever seen in a game.  A squashed DualShock image with two many fonts and a ugly way of displaying the buttons. 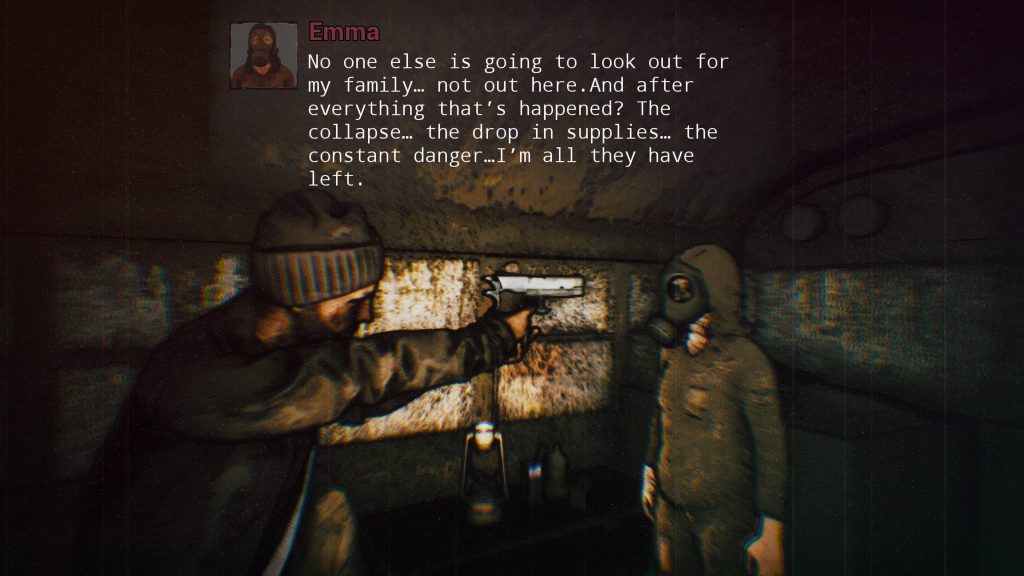 Once you get into the main game the problems continue.    Firstly, it takes a while to load up and then when you do you are pointing your gun directly upwards which looks entirely stupid, especially when you start running.  You aim using the right stick but unlike any twin-stick shooter ever, the rotation is controlled using up and down on the stick, rotating it will just confuse you, making aiming feel completely unintuitive.  It makes combat feel so stodgy and awful and it’s ridiculous because Contra got this shit right in the ’80s, Metal Slug refined it in the ’90s and Shadow Complex perfected in the ’00s.

It’s made worse by you having a tiny aiming aid and worse still by the fact that while the game plays out on a 2D plain, you can somehow shoot through people.  Trying to perfectly execute your targets is impossible thanks to either terrible collision detection or enemies being bullet sponges.  It might be the latter because you can take a lot of damage yourself.  So much so that I never seemed to die in combat unless I got really careless or tried to use a melee attack because the shooting is so risible. 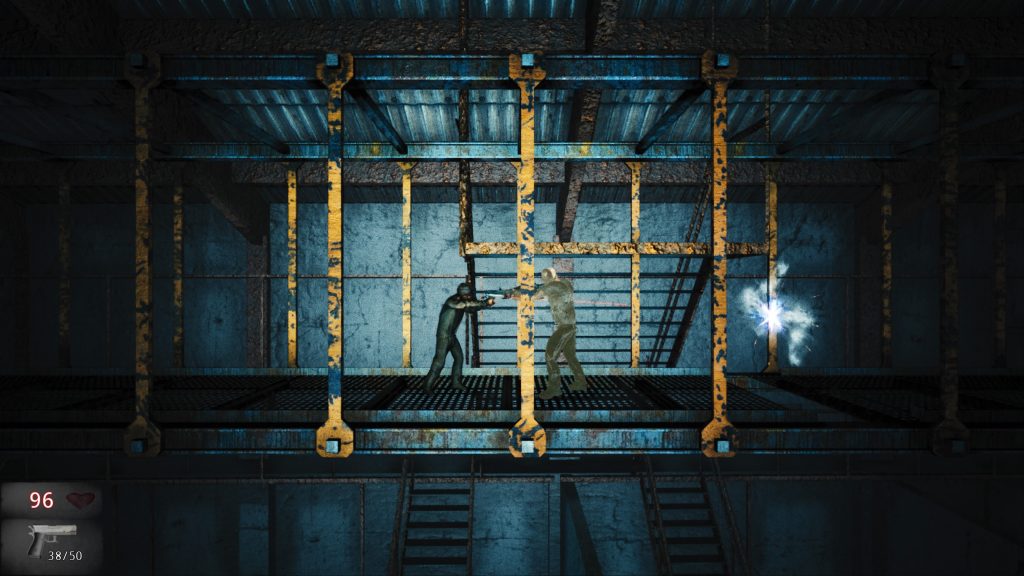 Aside from the combat which is oddly infrequent, there are obstacles to avoid.  This generally involves running and jumping over gaps to avoid electricity or spikes.  This is trickier than it should be thanks to the controls.  Sometimes you leap far, sometimes it’s like you have weights in your pockets.  You get stuck in, or float above, the environment or get trapped in a crouching animation.  It’s absolutely piss poor frankly.  And that’s when the camera behaves.  Sometimes it doesn’t and will either zoom in too near or out too far (so far that you can see the empty space under the floor – see image below), making the game unplayable either way.  Restarting the game fixes it but so would some game-testing and quality control.

The story isn’t up to much either as it just boils down to running up to people (with your gun out for some reason) and doing tasks for them.  The game is linear most of the time though so none of it matters.  Occasionally you’ll need to help someone in order to open a barrier and you’ll get the briefest bit of backtracking but there’s no real metroidvania exploration here and given that all the conversations are text-based, who cares?  There is some audio in the cutscenes but oddly these start out for a couple of seconds as full-screen comic-style panels before continuing by being projected onto a wall, which makes them seem a bit random and pointless. 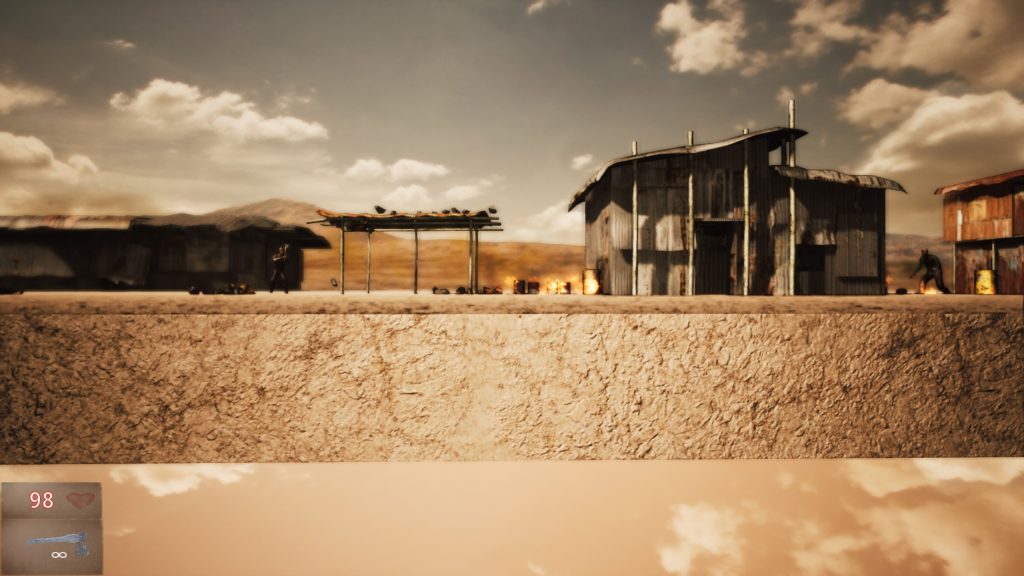 Then you’ve got the music which is entirely out of place with the sombre tone of the game and is just some generic rock music with Status Quo-esque hammond organ thrown in for no reason.  It’s entirely ridiculous until it stops at which point there’s no music for some reason (probably a bug).  The game sound effects are what you’d expect (basic gunfire sounds and some footsteps) but nothing special.

The graphics aren’t too bad, and occasionally you do get some really nice scenes, but they are often a little too brown and beige.  It is post-apocalyptic after all.  The animation is quite basic (and starting each level looking upwards never stops being ridiculous) but the parallax effect is very deep which means there are quite a lot of objects at different depths which makes the game feel like it is playing out in three dimensions as opposed to two.  The end of the game looks quite nice but by then it’s too little, too late after running through so many near-identical landscapes. 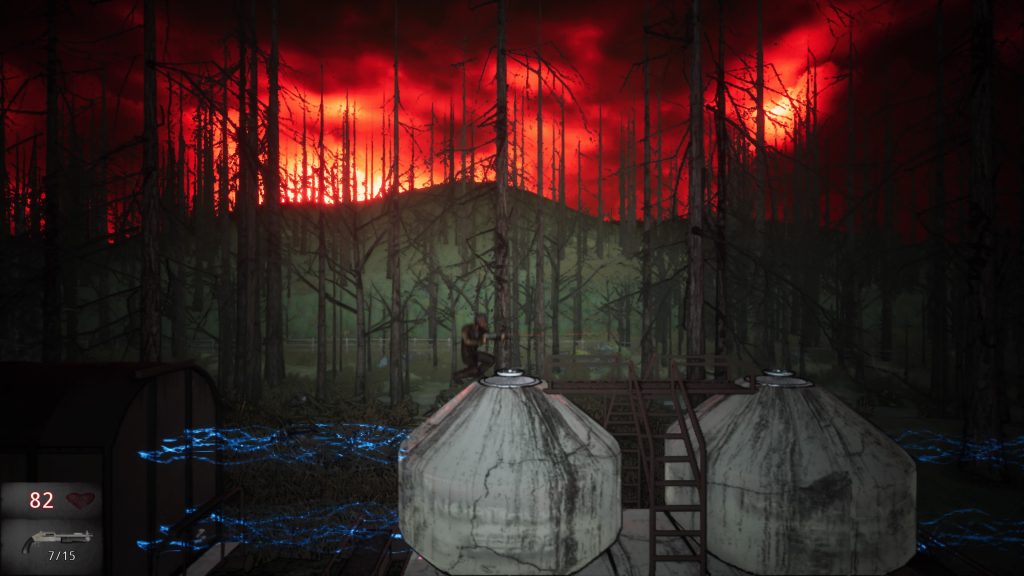 Despite nearly every technical aspect of the game being poor, I had moments of basic enjoyment which is why this game is getting any points but it tested my good will with all these issues (especially the camera problems and getting stuck in scenery).  I do like the genre and that has helped but this is one of the worst examples I’ve seen of a modern run and gun title.

Once you’ve started Post War Dreams, a couple of hours later you’ll have beaten the game with barely a struggle.  The very last part is pretty tricky when you face some stronger soldiers who are tricky to target.  I ended up abandoning my guns because they stopped working and instead used my axe and a bunch of checkpoint restarts to get through it only to be confused by the end of the level where it looks like a tricky platforming section but actually requires you to shoot a truck, something that isn’t indicated well.  Either way, during this sequence the camera went mental again which didn’t help.

And then it was over. For a while I thought Post War Dreams might be from the same devs as The Cruz Brothers, the worst beat ’em up on the system, because it shares a similar graphical style, a host of terrible design decisions and a lack of quality control but no, this is just another bad game.  It’s a shame because we’d have loved a post-apocalyptic take on Shadow Complex but instead we’ve got a game that doesn’t do anything well and offers very little value for money for its $12.99 price tag (it’s not on the EU store as of the time of writing).

If anyone else bothers to review this game we’ll be surprised but we do wonder if they’ll see it the same way as us.  Maybe we’re a bit jaded but we’re getting sick of reviewing games that hit the store in a hopelessly broken state and Post War Dreams has issues that even the most basic of playtesting would have picked up.  The Xbox One version has the same issues too so any credit the 2017 PC version of the game might deserve isn’t going to be reflected in reviews of these lazy, broken 2019 ports.

Post War Dreams
2 Overall
Pros
+ Occasionally the graphics are very nice
+ We didn't completely hate playing it
Cons
- Poorly considered controls
- Bad animation
- Repetitive gameplay
- Amateurish menu design
- The worst combat in a run and gun game that we've seen
- Basically unplaytested
- Incredibly short
Summary
Post War Dreams is a 2.5D run and gun shooter which doesn't do much but manages to do all of it badly. Aside from some okay graphics, there's nothing here for the developer to be proud of.