Henchman and Goon are a Norwegian developer whose first game, Pode found a home on the Nintendo Switch last year. Despite some technical issues, it was warmly received. Now on the Playstation 4, the technical issues appear to have been brushed aside and the game has managed to maintain a lot of it’s wonder. 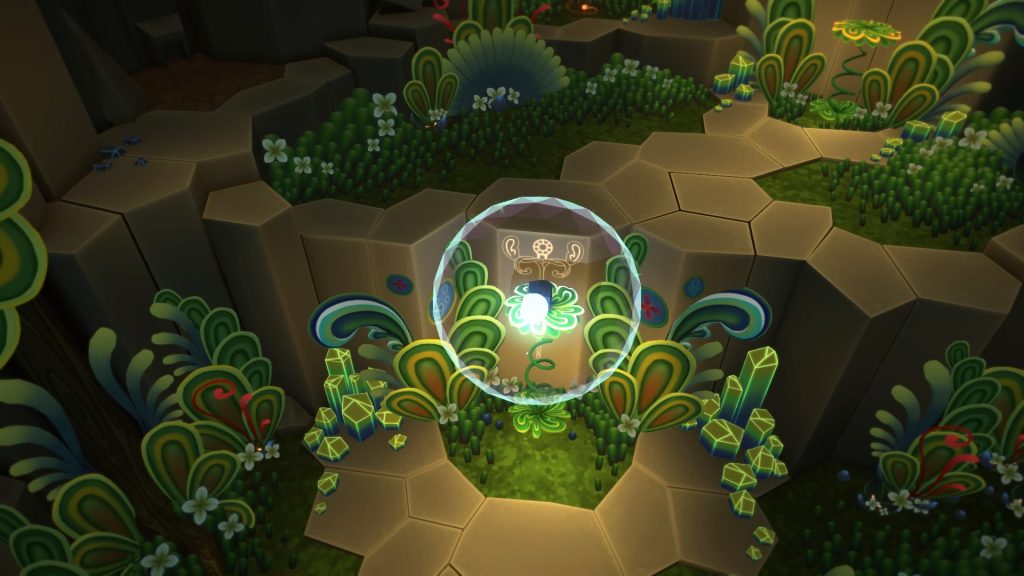 The story is simple with very few beats or twists to take into account. It begins with a rock crashing down to earth. He meets Glo, a sunny star that is always looking skywards. The two inhabit a barren, lifeless landscape and their overall goal is to grow the mother plant. Over the course of the game, you solve puzzles to add more to the mother plant and little snippets of the tale are handed over murals. There’s not a lot too it but it does lead to a heart-warming conclusion.

Pode is a cooperative platformer you can play solo or with a friend which gives you control over two characters with different abilities. Glo, gives off light which helps illuminate your surroundings and trigger plant life. You’ll find yourself wandering through every nook and cranny of the level to sprout more greenery. Bulder is a hefty lump who triggers rock formations with their aura and can transport blocks, trigger switches and even hurl Glo to new areas. 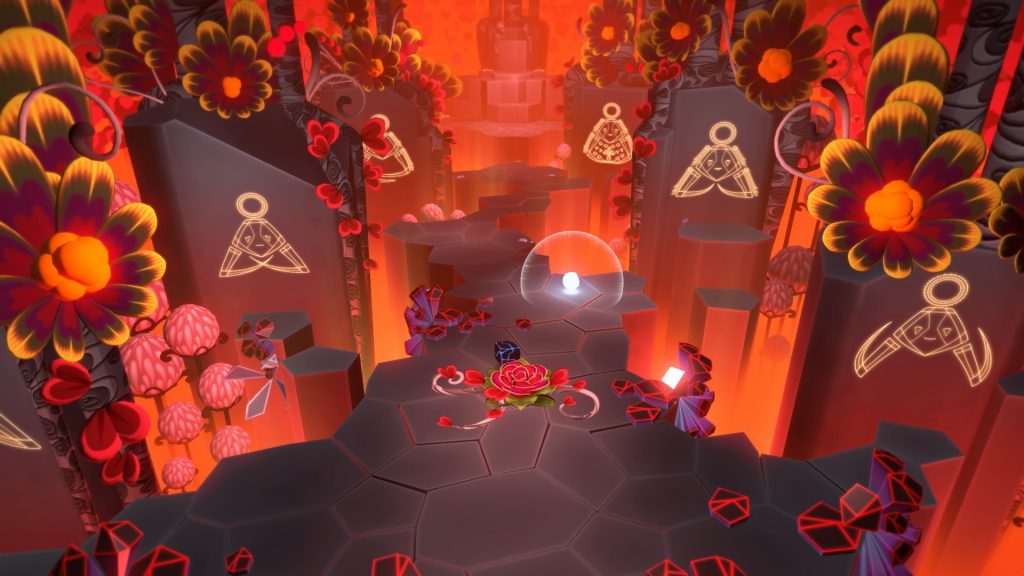 Abilities are handed to you slowly and, by the end, you have several you can utilise to get from one spot to another. Most of the basic traversal is handled by a standard jump but getting both characters to cooperate is the key to getting them both home. They can be combined in intriguing ways and, as a solo player, I never found micromanaging them to be too troubling. Puzzling things out can be quite fascinating as you figure out who needs to be where and when. With skills being given to you incrementally, the increase in challenge is gradual. To begin with, limiting what you can do does help you to find solutions quickly.

For the most part, you’re operating switches as either character and each zone culminates in puzzles which require considerably more thought. The game decides to favour a method of teaching that is more show than tell and these tests can provide some moments of confusion. There is logic to them but coming to the right conclusion can lead to some situations where you’re overthinking. At least that’s how I felt at times. Having a second player around to bounce around ideas definitely helps reduce this. 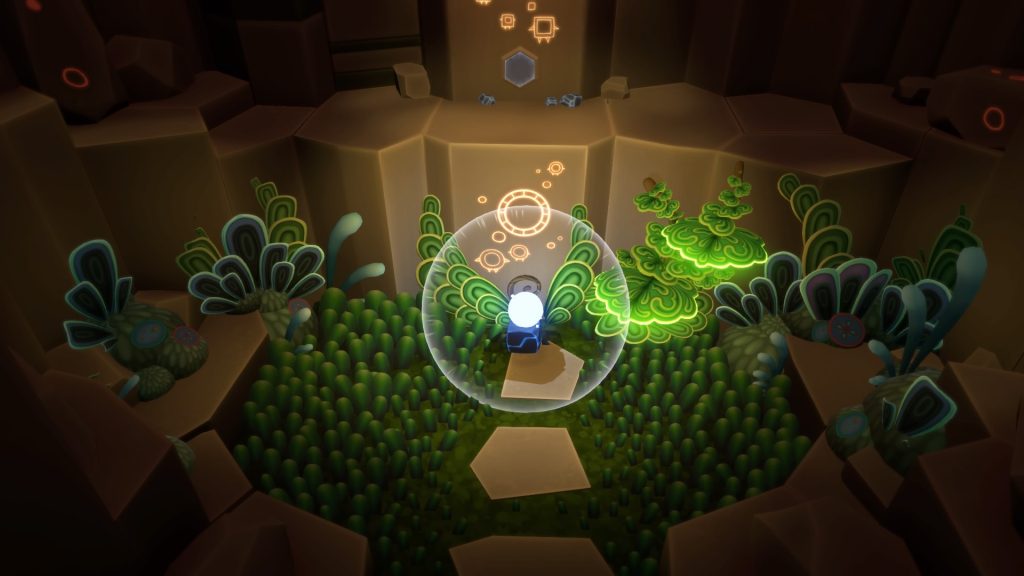 Pode is charming and disarming with a very mellow score and a colourful visual treatment. The way plants and rocks burst into being is very satisfying to see. It gives you some involvement in adding more to environments that begin in quite barren fashion. Paths are laid quite clearly with your destination usually easy to spot. Glo and Bulder animate well with adorable audible chirps and waves adding personalty to two protagonists that already carry a cheery appearance. Cutscenes really hammer this charm home.

Unfortunately, you don’t have full camera control. Rooms are usually small but there are moments where a change in perspective can make jumps a little tricky to judge. There’s no penalty for death with pits just leading to your character returning to ground level. You don’t require precision for Pode‘s platforming but I found minor frustration when I saw a character fall off the map only to see them reappear far from where they left off. Recovering lost ground after repeated drops can irritate. Thankfully, it’s not an often occurrence. 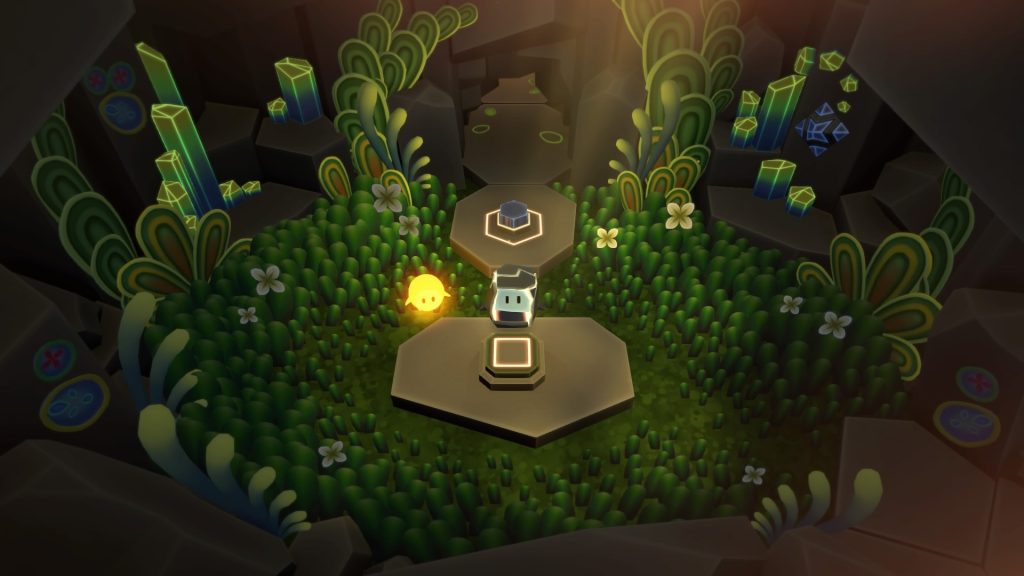 There’s a good tempo to Pode with each section taking maybe half an hour. It leads to an experience close to a handful of hours which offers more than I was anticipating. There’s collectibles to find and murals to ignite but, for those that just want to experience the story, the meat and potatoes of exploring and platforming is substantial enough.

After the curtains roll, there might not be much to return to but the tale is nicely told and presented. Henchman and Goon do a lot with the small levels and diminutive characters at their disposal. The controls work well although, as more options are given to you, the right solution can sometimes leave you in a muddle. Overall, though, it’s a relaxing experience with a very stress-free pace and tone with some clever ideas.

Pode
8 Overall
Pros
+ Vibrant, colourful environments.
+ Adorable characters.
+ A relaxed, complimentary soundtrack.
+ Smartly paced.
Cons
- A fixed camera can make some jumps hard to judge.
- Sometimes checkpoints can place your characters far apart.
- Some of the more involved puzzles might not nudge you enough in the right direction.
Summary
Pode's a fantastic effort. The colourful world that you spark into bloom is well presented with a wonderful soundtrack complimenting the visuals. The platforming works well as you utilise each character's abilities and the pace is nicely maintained from level to level. Sometimes the camera can conspire against you and some puzzles can initially appear obtuse, but there's so much charm to this.