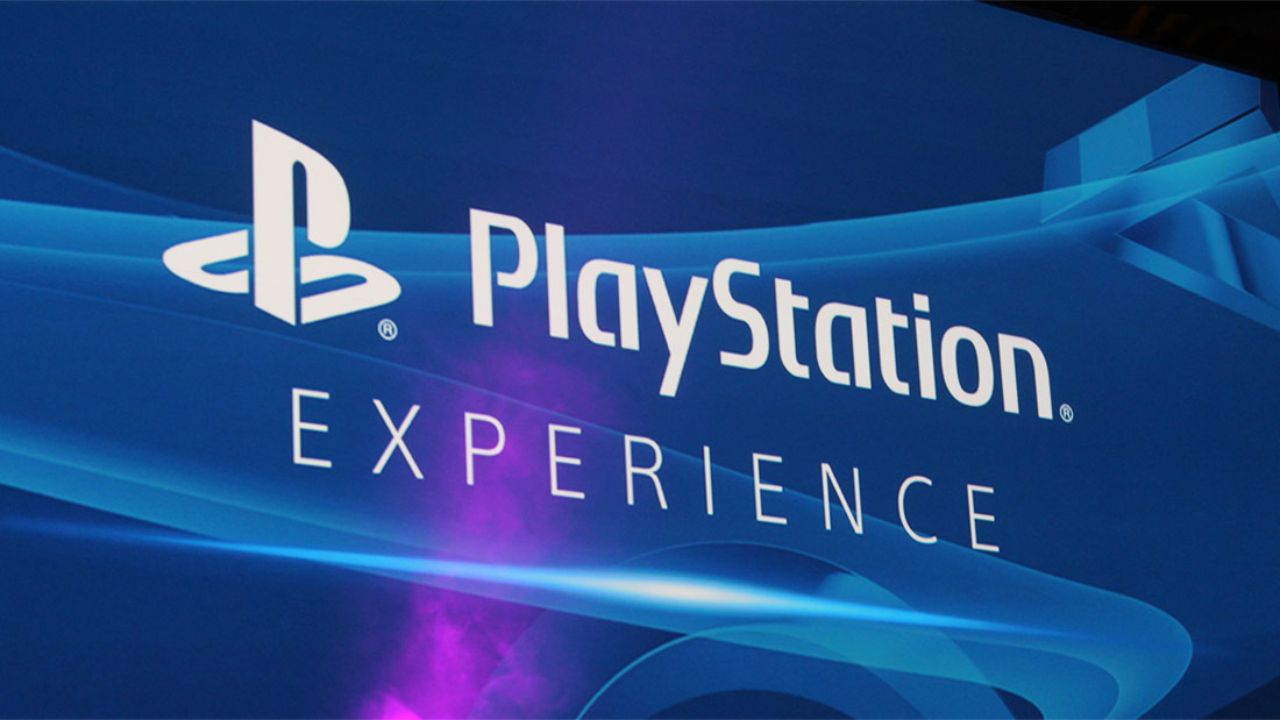 On December 3rd 2016, Sony held their PlayStation Experience Conference and this is how it went down in realtime. 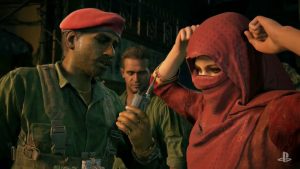 The live stream opens with footage of a lady walking around in some miserable looking decrepit country.  She’s fully covered in a not very stealthy red robe and is stopped immediately by some guards who are clearly pricks.  She then uses a hairpin to unlock a door.  As with anything full retail and story-led, minutes go past with no real gameplay at all.

Eventually after five minutes she Ronda Rouseys a bunch of guys with kicks and elbows.  It feels like a Assassin’s Creed game.  It turns out to be an Uncharted game which is basically Tomb Raider, so that’s a shame.  Should have known it was Uncharted really.  Nothing happened for ages.  That’s the whole series right there, right?

Shawn Layden takes the stage missing, as ever, his neck.  The crowd is whooping because of the Uncharted thing.  I feel entirely out of step with them.  Shawn mentions the PSVR (some cheers), PS Pro (some cheers) and the PS Slim (no cheers).  He seems nervous.  Probably because Microsoft have finally figured out how to sell an Xbox One these days.

It’s not just his neck, his confidence is gone as well.  The crowd give him some pity cheers.  Come on, kid.  You can do it. 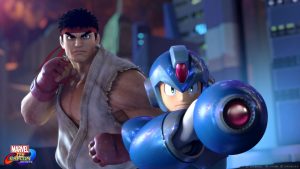 Capcom’s logo hits the screen.  Within seconds we see Megaman and Ryu face up against Iron Man.  That can only mean this is Marvel Vs. Capcom 4.   The crowd holler themselves to death.  Oh, it’s called Marvel Vs. Capcom Infinite.  There’s two problems with this.  One, Capcom can’t help but ruin it with a shit boss battle.  Two, fuck knows what the pricing model will be.  Surely they can’t do another Street Fighter 5.

Shawn’s choking to death.  He mentions that Ultimate Marvel Vs. Capcom 3 has just hit PSN.  A man in the crowd loses his fucking mind.  Sit down, you daft twat.

Oh shit!  A new Wipeout?!  Now you are talking.  As a PlayStation fan I can’t help but be excited by this even though I’ve always been unbelievably terrible at them.  Oh… wait, it’s a collection of Wipeout 2048, Fury and HD called Wipeout Omega Collection.  Hopefully this isn’t three ports but rather a new game that uses all the tracks.  We’ll see though.

Some sort of Destiny thing is happening now.  I’ve not played Destiny for about six months which means in game-terms I’m essentially disabled now.  It’s called The Dawning.  I don’t know what that means but Shelby Cox is here to explain something.  But she’s all intense like a young Hillary Clinton.

She introduces some sort of Crash Bandicoot thing.  It looks like the first three games remastered.  I should go and make a cup of tea while that news plays itself out.

The words ‘Call of Duty World League‘ hit the screen and literally skip forward.  Shelby is back.  She’s now talking about Resident Evil 7.  She announces yet another fucking demo for it.  The crowd go mad again.  She says it is “batshit scary” on PSVR.  Fuck that.  I’m too much of a puss. 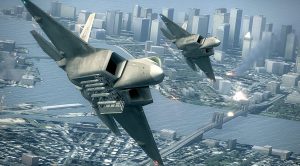 Next up is Ace Combat 7.  Now I loved Ace Combat 2 and 3.  After that the series went a bit wanky with stupid storylines that made everything dull.  The footage being shown has a bit of the good stuff (planes, dogfighting) and some of the shit stuff (talking, children).

She’s talking about the Capcom Cup Finals now.  It’s about pro-Street Fighter players or something.  I met one once, he was an absolute fucking dickhead who I ended up hitting in the throat at a kung fu class in South London (true story).  Anyway, I couldn’t be any more bored of Street Fighter.

Shueie Yoshida steps onto the stage.  He’s here to talk about the “sad owldog game” (thanks, Chris) The Last Guardian.  Now I never liked ICO but I did like Shadow of the Colossus.  I’ll probably give this one a miss though as I’m incapable of feeling emotion from Japanese games. 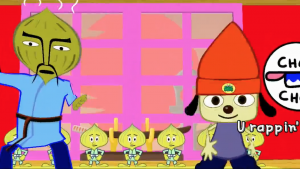 That is apart from the SHEER JOY that I feel when I play Parappa The Rapper which I still play fairly regularly.  It’s getting a PS4 remaster and the demo is on PSN down.  The much less good LocoRoco and Patapon are also getting the same treatment.  Fuck them though, I just want to play Parappa.  Where the fuck is Umjammer Lammy though?!

Yoshida now mentions a “super fun new game” which would appear to be Knack 2.  That’s a bold choice given that no-one in the whole world liked Knack.  Let’s see if the crowd cheer for this one.  If they do, then none of their cheers mean shit and they are all idiot shills.  They cheer!  Fuck off, this crowd.

Next thing is up.  A girl called Raven catched an apple.  This appears to be anime-related so I’m already out.  She shouts and an eagle appears or something.  The voice actress seems to have done nothing but scream.  Oh, it’s Gravity Rush 2.  I should really play the original which I’ve owned for years now.

Next up is Gran Turismo Sport.  Now, I don’t care about anything to do with cars but I played the arse off of the original Gran Turismo.  And by that I mean I bought a Skyline and used it as a battering ram in every race.  I haven’t cared about the series since but I’m vaguely aware this seems massively overdue.

Another anime thing… oh Ni No Kuni 2.  I didn’t have a PS3 when the original was briefly popular and I don’t do JRPGs (if that’s what this is – I assume it is, the girl in it has animal ears).  Yeah, yeah fast forwarding this.

A man called Gio Corsi comes to the stage.  He looks like that one twat they always have in things like Masterchef US who is a white guy who is far too old to dress in hockey shirts.  Especially a PlayStation hockey shirt.  Fuck this guy. 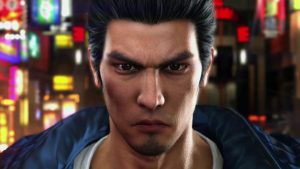 He announces two Western releases for Yakuza games:  Yakuza 6 and Yakuza Kiwami.  The fans go wild and I remind myself that I own a bunch of these on PS3.  A new Danganronpa is announced too.  I have no frame of reference within which to have a reaction to that.  It’s hitting the Vita though, which is something.

Square Enix and Platinum Games’ very Japanese looking fake Star Wars ’em up Nier: Automata gets announced but gives way to something else.  YS Origin is all anime silliness and is accompanied by that sort of hyperactive music that makes you ill.  Another Vita game though.  That’s something.

A space thing is up next.  It looks beautiful.  Not sure how much of this is gameplay but it’s all space battles and explosions which is all I really want.   It’s called Dreadnought.  I hope that isn’t too online-focused.

Supergiant Games’ latest, Pyre, is a party-based RPG.  Their previous games were good so hopes are reasonably high that this will be good but the footage looks kind of shit to be honest.  It gets the most pitiful cheers of the night.  Vane is next and absolutely reeks of ‘indie game about feelings’ to me.  There’s a bit where a kid is walking along a balance beam.  So you can already tell what that’s going to be about.

Next up is some sort of roaming beat ’em up.  You know, the sort of thing where you press X a lot and the character does a violent ballet of moves that you have very little to do with.   It’s called Absolver and has the tagline ‘online melee action’ which means it’ll be dead on PSN within a week of release.

The next trailer, What Remains of Edith Finch, gives away very little. 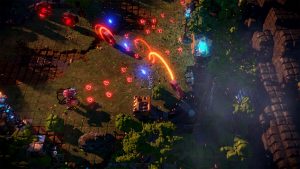 But then the most important word of the day hits the screen:  Housemarque.  Taking literally all its inspiration from The Animatrix, the animated cut scenes give way to some gameplay footage for Nex Machina which, unsuprisingly, is a twin-stick shooter.  I’m not as excited afterwards as I was at the start of this paragraph.

Stupid hockey jersey man keeps talking and a bunch of footage of indie games, including the stupidly awful looking Niddhog 2, hits the screen.  People don’t know whether or not to clap or cry.

A very Japanese trailer plays that has some sort of fourth-wall breaking thing going on.  It’s for Let it Die.  Oh and it is free on PSN apparently.  Okay then.  He then mentions that you can also buy Garou: Mark of the Wolves (the best Neo Geo fighting game) and Lara Croft Go (which I don’t care about at all).

Hockey twat leaves to the best footage of the night.  A port of Windjammers which has online play.  That’s going to be amazing. 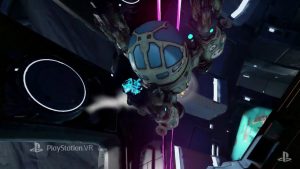 Asa Qizilbash comes on and gets ahead of me by joking about his own name.  He mentions PSVR which is all I care about right now so let’s see what you’ve got Asa.  He opens with Starblood Arena which looks like a Descent-ish arena shooter.  It’s certainly colourful and fun-looking.  I’m in.

They show more VR games but it is tricky to see what’s up given that it’s all in 2D here but the future for PSVR owners looks bright.  Even if the music behind it sounds like Coldplay.

Team Ninja are back with Nioh.  Unsuprisingly, this is a hack and slasher and I predict it’ll be absolutely bollocksly difficult.

At this point my stream goes to shit (and remember, I’m not even watching live!).  It returns with some sort of Baseball game.  Yeah, I’m not qualified to talk about that.  It’s called The Show 17 or something.  It has a ‘retro’ mode though which looks slightly more enjoyable.

Next up is Horizon: Zero Dawn.  It certainly looks beautiful.   The high-tech tribal thing is kind of interesting (unless it does the Borderlands thing of giving you lots of tech in the middle of hundreds of miles of nothingness).   We remain tentatively excited but the video doesn’t show anything. 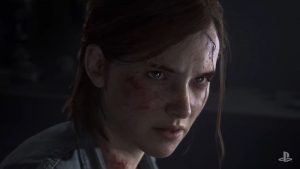 The conference goes out in a big way with an early look at The Last of Us 2.  It opens with some unnecessary footage of Ellie playing a guitar and singing.  The crowd is quite excited by that.

So there you go, 2017 and 2018 are looking pretty interesting for PS4 owners and even us Vita fans got a couple of mentions.