Pillars of Eternity II: Deadfire came out on PC a year and a half ago to great reviews. A sequel to the 2015 real-time-with-pause RPG, it continues the story of your created character, The Watcher. Now it’s arrived on the PS4 with all the DLC included in the package. That obviously means that you’ll get your money’s worth and the PC reviews point at a great game, but the transition to PS4 has not been kind. 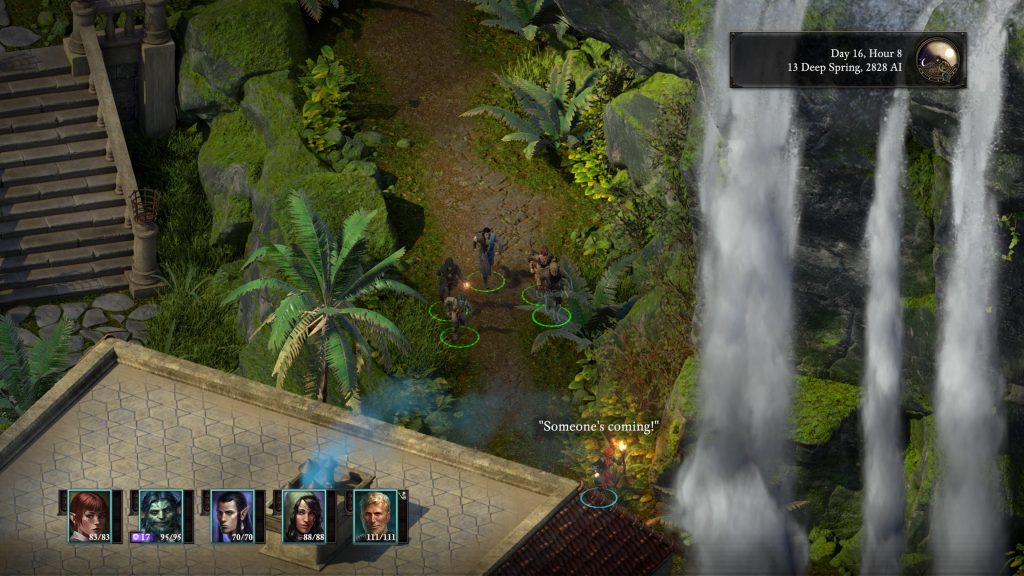 There’s no problem with the gameplay. Much like Baldur’s Gate back in the day (or the recent remaster) you control your party of characters, either directly or with a ‘mouse’ pointer, as they explore towns and dungeons. You can talk to NPCs, pickpocket them, steal their property, gain quests or attack them if you’re feeling super evil. In dungeons you can stealth around to catch enemies unawares and you have a bar of abilities to use to buff your party or directly attack enemies, in real-time-with-pause or turn based gameplay. Nothing too unusual for fans of the genre.

You also have access to a ship that allows you to explore the seas and battle other ships. The ship is upgradable and you can hire more crew as you come across them who will level up as you win battles which can be fought ship to ship, giving turn based instructions, or you can board and fight the opposing crew the same way you do everyone else.

The exploring and questing is very enjoyable, with new loot making you stronger and your stats (which are fully chosen by you, along with your class and abilities) giving you different ways to approach the environment, allowing you to climb if strong enough or analyse a situation if you’re particularly perceptive, and converse with people. Your party members can pick up some of the slack, providing strength or knowledge if you’re lacking. The gameplay is great and can happily stand alongside Divinity: Original Sin 2 but technically there are some major issues. 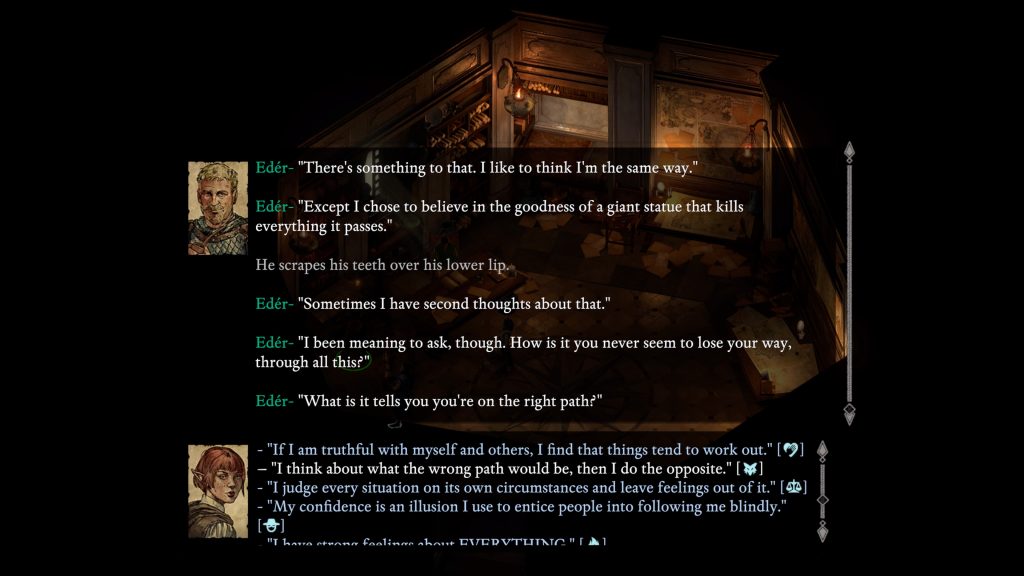 The obvious one is the load times. This isn’t an open world game, each area is broken up into zones. Dungeons will have multiple areas separated by loads, you load when you enter a town, each building you enter requires a load, if you go upstairs you’ll need to load. Now individual loads aren’t necessarily an issue in itself, it’s the length of them. Best case scenario is a twenty second load. Worst case (that I’ve timed)? Two and half minutes. That’s insane. Worse still that’s entering a town, so you then go into a building that requires a thirty second load, there’s only a chest for you to loot in there so you do that and leave. Two and half minute load as you re-enter the town. Obviously if there are multiple buildings in the zone then you’ll be jumping in and out of these loading screens constantly and it really, really adds up.

It’s definitely the worst issue and changes how you play the game. It does give you a chance to read plenty of emails or news sites if you’re so inclined though. It’s not the only issue however. The controls have transferred pretty well to the controller, but sometimes you simply can’t interact with things. Things automatically highlight if you’re controlling the character directly, or you can change to a mouse pointer with a press of

and highlight stuff directly. However sometimes you’ll click on something and your characters will just run off in the opposite direction. A few attempts usually fixes it but it’s a pain. As too is the wheel that you use to go into all your sub screens like your inventory or map, sometimes it just doesn’t respond and you have to pause and unpause to make it work. 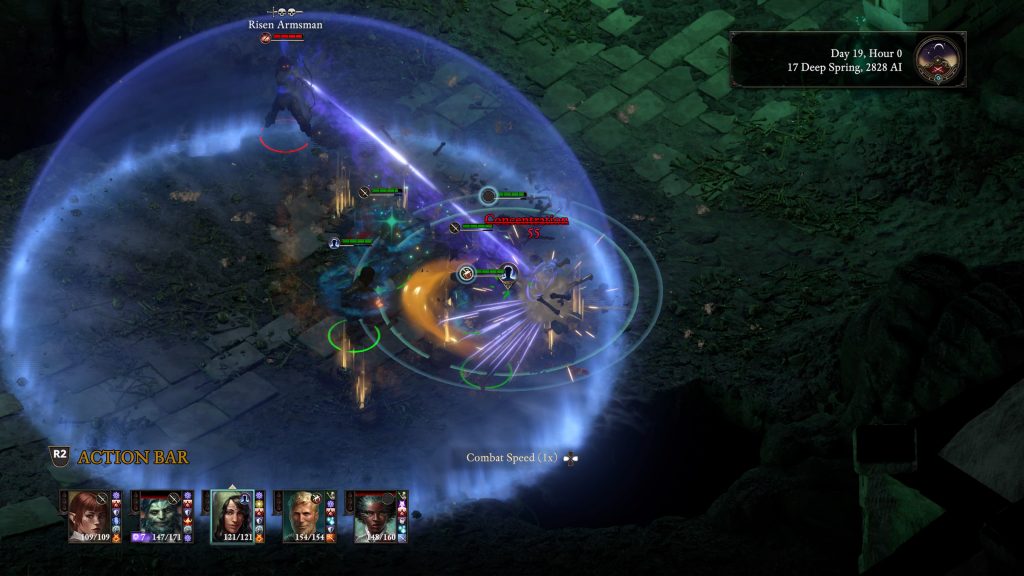 When casting certain spells the game can freeze for a couple of seconds which doesn’t feel great. I’ve had the game not allow me to manually save or load (the game autosaves every time you enter a zone though, luckily) but that was fixed by restarting the game. I’ve also had multiple crashes. If anything things got worse the more I continued to play. Individually these things weren’t too bad but combined altogether, sometimes in quick succession, it starts to grate.

Which makes this a tough game to score. It’s no doubt a fantastic RPG but the technical issues I’ve highlighted are a real problem. The game is still playable and if you want to play it and have no other way to do so and believe you can see past these issues then you’ll have a great time. I’m a pretty patient person however and there were times when it frustrated me for the wrong reasons, which is not what you need. 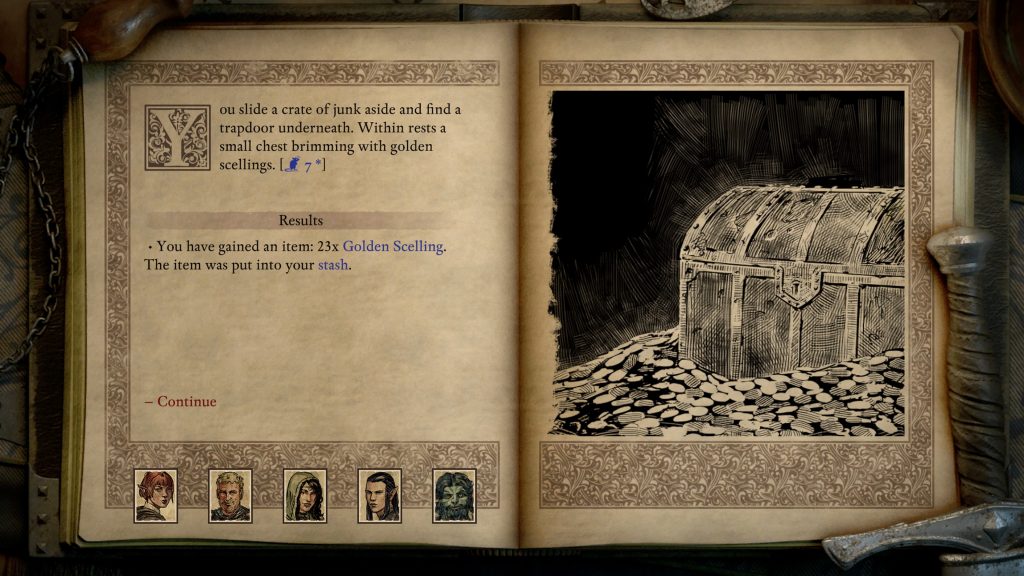 So with that I have to play it safe. It is a great game when it works as intended. It’s not broken, but it’s not had a smooth transition from PC either. A little more care and the grade would have been close to Divinity: Original Sin 2‘s fantastic score, but as it is I’ve got to penalise it. As I said, if you’ve got no other way to play this then I recommend Pillars of Eternity II: Deadfire for fans of the genre but, unless it gets patched, know that it may test your patience in ways you wouldn’t expect.

Pillars of Eternity II: Deadfire
7 Overall
Pros
+ Lots of control over your character's growth
+ Plenty of content including the DLCs
+ Stats play into conversations, exploration and battles
Cons
- Load times are painfully long
- Other technical issues
Summary
There is no doubt Pillars of Eternity II: Deadfire is a fantastic game, unfortunately the PS4 version is not the best way to play it. The load times along with other technical issues make it difficult to get into at times. It's not broken so you will get enjoyment out of the masses of content, but you'll have to have plenty of patience.