Mechs are awesome. Suiting up in a giant metal robot to stomp through the streets whilst battering monsters is an inherently fun idea. Modus Games and The Balance Inc. are combining to give their take on the mech brawler. Boasting a wide swath of characters, destructible environments and an interesting take on co-op, Override: Mech City Brawl is upon us. 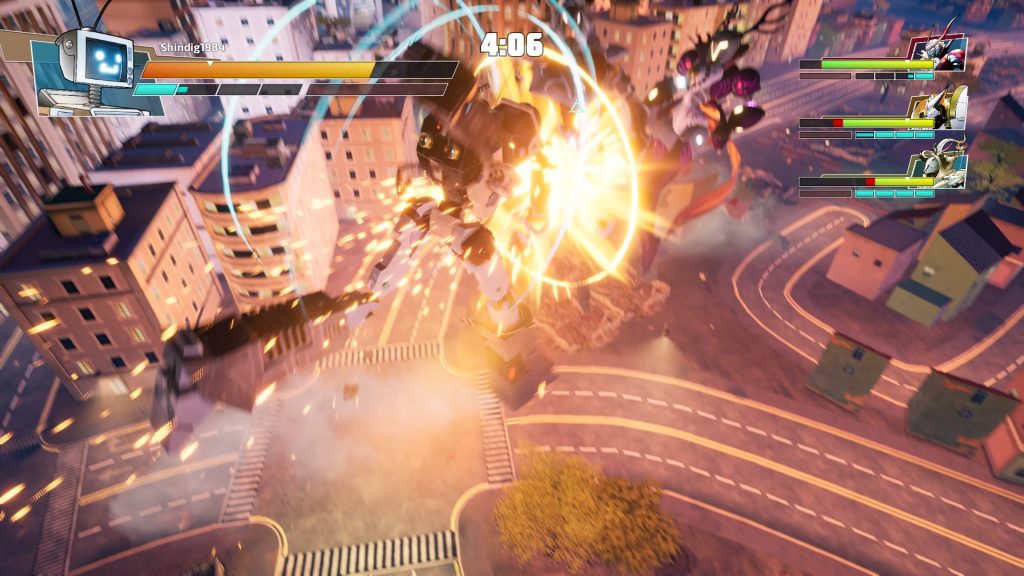 Combat is simple. On the face of it, Override: Mech City Brawl is an arena fighting game similar to something like Virtual-On. It doesn’t feel as fluid. Movement is relatively swift but attacking feels clumsy. Think of the shoulder buttons being associated with each of your four limbs. Attacks amount to basic kicks and punches but can be charged to create more damaging sliding kicks and roundhouse punches. Attacking from the air allows for dive kicks.

Special attacks are accessible by holding square down to modify charged strikes. This is where the different characters begin to diverge. Vidar Viking opts for archery to provide some range and can spawn traps to halt foes. Setesh has a monstrous ultimate attack which seems to spawn chaos for the whole arena. Other fighters favour projectile attacks whilst Mechageckon turns himself into a relentless buzzsaw. There’s a mechanical and cosmetic variation to the cast that does keep things fresh. They also have access to a desperation move that, once your health is low enough, can be triggered to turn the fight in your favour. 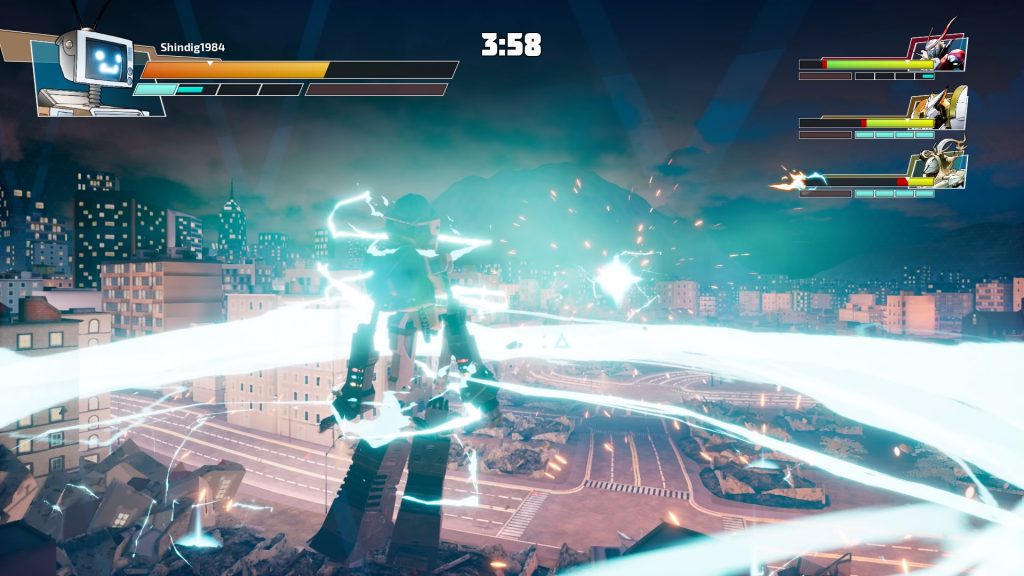 It’s all governed by energy with the intention to make you consider your attacks and movement. Committing to too much can see your robot overheat and does attempt to restrict the pace of competition. Coupled with the chunky but slow strikes, the fighting feels too slow for my liking. Maybe I’ve been spoiled by other games that give you a more fluid approach.

Enemy attacks seem to all have an element of stun about them so you can feel stifled when caught out by a group or combo. Being knocked down isn’t too problematic as you can activate a quick recovery with a little timing. Springing back to your feet feels great and you do have a shield as a defensive option. This can also open up the possibility of counters but I’ve struggled to get the timing down for that. It’s a damaging gambit, if you can manage it. 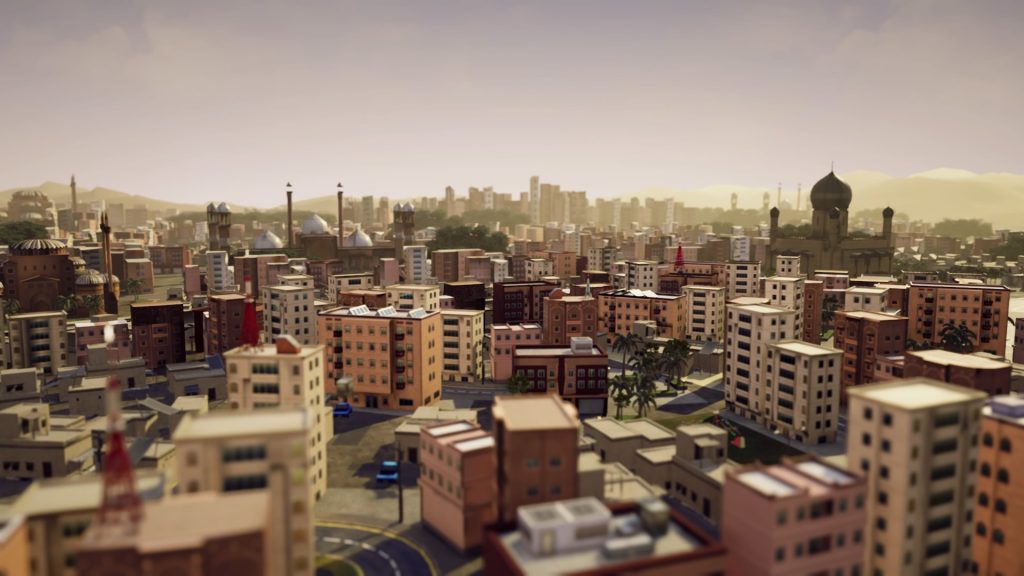 There’s a clean, bright, aesthetic that I do actually find pleasing to look at. The mechs feel intricately designed with plenty of unlockable cosmetics available. They manage add some charm to something that could’ve appeared quite bland. The arenas all take on a different motif with each looking to give you a sense of place. It’s a little stereotypical but the destructible nature of the environments make it feel like you’re stomping around a model village. The sense of scale helps and there’s some impact to strikes which do help make the fights feel epic.

Music adds to this with a typical bombastic score. It’s a decent presentation that’s let down by the occasional hitch. I can’t really consider it slowdown as it doesn’t seem to be triggered by chaotic action. I have other troubles too where attacks can whiff simply because I’m not locked on to an enemy, even if they’re right in front of me. I’m also experience inputs being dropped which is never a good sign.

Override: Mech City Brawl‘s campaign feels like a globe-trotting escapade with a nice sense of progression. You take on several missions whilst preparing for an impending threat. It reminds me of X-Com‘s time-constraints and, even narratively, there’s cues from that series. You have a commander barking orders at you before and after each mission and you have constant, familiar threats.

They’re randomised but a lot of them focus on eliminating various Xenotypes. These are alien creatures that tend to spawn in waves. They quickly begin to feel like fodder but they do offer some variation with some enemies focusing on airborne combat and big brutes offer more of a challenge. Missions are usually short and success brings ample reward. Research points allow you to strengthen your mech’s systems. You can opt for better armour, thrusters and damage. There’s a sense of progression here that you just don’t get from the other modes and it’s very welcome. 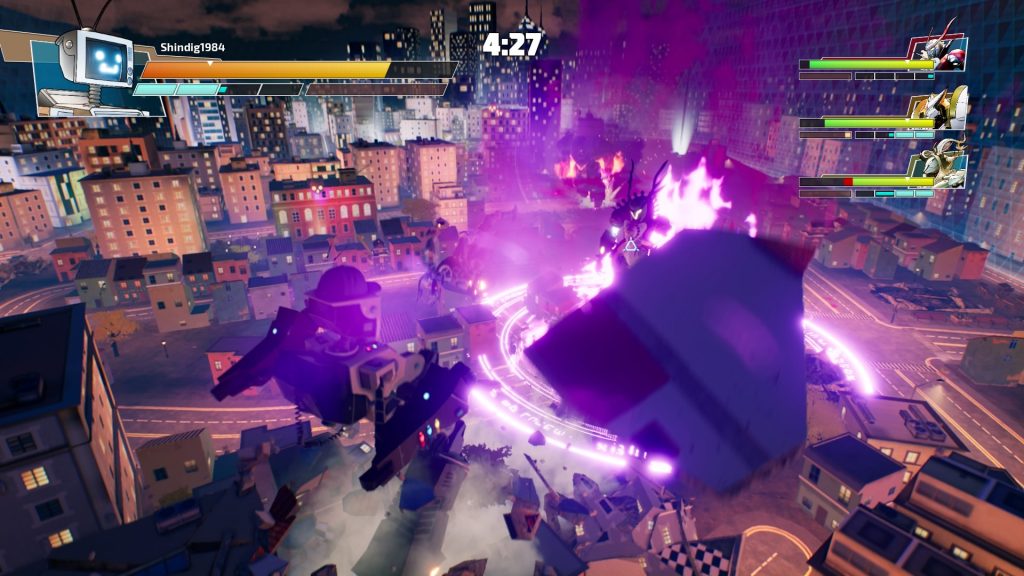 Defeat allows you to retry which undermines the doomsday clock. You do encounter bosses along the way and they do deliver the game’s most stern opposition. Whilst levels do tend to increase in difficulty, your mech is adequately equipped to deal with it. All told, it’s a mode that’ll take you a couple of hours to traverse and it does help you understand all aspects of combat. There’s some missed opportunities like the solitary mission where you’re assisted by a partner in battle.

Thankfully, co-op is available and it does offer a interesting twist. You can split piloting duties between you. It’s not even split as player one deals with movement and kicks. This leaves the other to deal with the remaining limbs and blocking. It makes an already clunky fighter more of a struggle. There might be some joy from trying to coordinate but, I just don’t feel the base combat is good enough. There’s a more conventional team battle which removes this. Online competitive play fares better with the varied cast offering plenty of options and the wide arenas allowing for strategic moments of attack and defence. It’s probably where the most fun lies outside the campaign.

Override: Mech City Brawl
6 Overall
Pros
+ Arenas have a nice 'model village' look to them.
+ Combat is simple to grasp.
+ There's a nice sense of progression to the campaign.
+ Plenty of unlockable cosmetics to add to the varied roster.
Cons
- Combat feels a little slow and clumsy.
- Splitting a mech between players can hand you an uneven experience.
- Some technical hitches and dropped inputs can really hamper the flow of battle.
- Online matches are tough to find.
Summary
Override: Mech City Brawl has a nice, clean aesthetic with arenas that are fun to stomp around. The campaign offers a nice sense of progression but, once you strip that away, you're left with a fighter that's a little too slow and clunky for my tastes. It's simple to grasp but I feel it lacks a fluidity and immediacy other mech games can offer.