As a man that plays a lot of racers, it’s nice to see something different. Whether it’s a novelty effort or a twist on something familiar, it’s great to see new interpretations of wheeled transport. Overpass comes from Swedish developer Zordix. Scandinavians seem to know off-roading so you hope this effort will find a good niche. 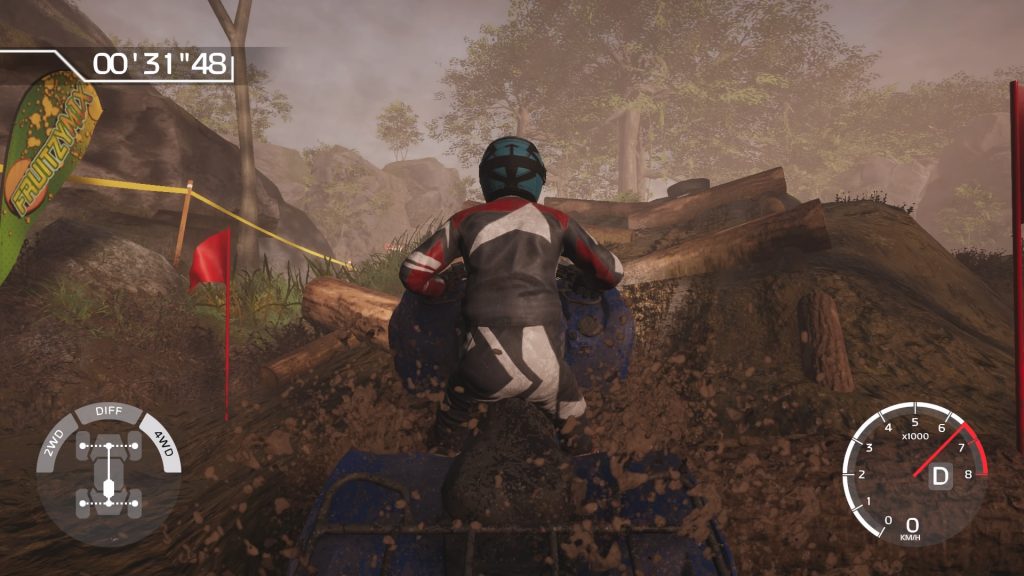 Overpass takes place against the clock rather than direct competition. If you’re familiar with the sport Trials, you’ll know the deal. Vehicles tackle a series of obstacles and the best time wins. Time is added for any missed or failed obstacles whilst being out of bounds also incurs a penalty. On paper, this should be right up my alley. I spent a fair amount of my teenage years watching Dougie Lampkin dominate the sport on two wheels. There’s a meticulous, patient appeal that, at times, Overpass replicates.

The driving is very much led by physics. Each obstacle impacts your vehicle and trying to keep track of where your four wheels are can be quite the challenge. Weight is a consideration on ATVs and their smaller frame can make even the simplest obstacles hard to pass. Overpass requires a lot of practice and, whilst there is a lengthy tutorial to introduce you to concepts, controls and obstacles, it doesn’t quite do enough. One of my biggest problems are a lack of feedback. 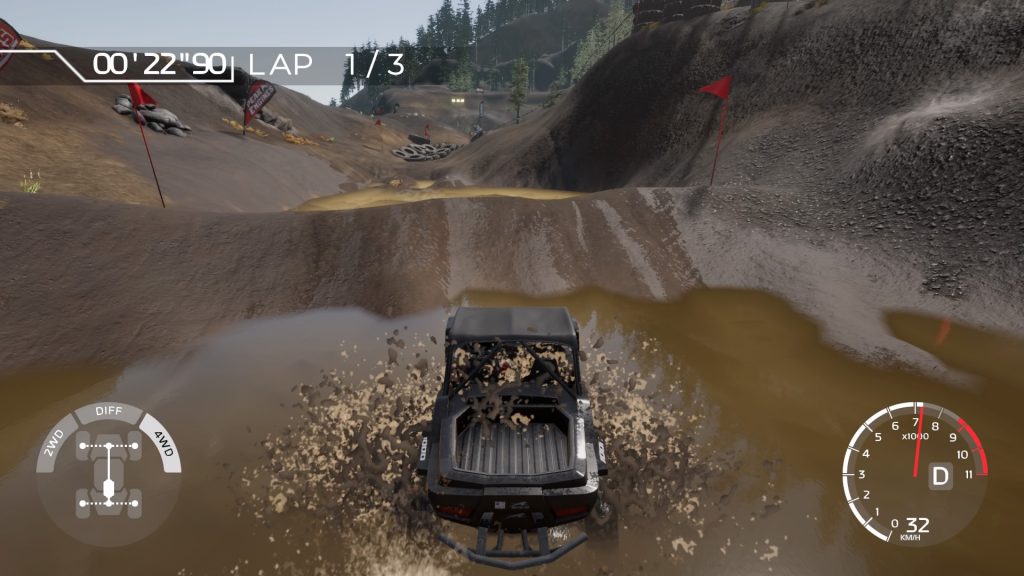 Your tyres will dig in, hills can become too much and sometimes it’s not clear just where the path of least resistance is. A lot of your efforts become visual, as you look to quickly decipher an upcoming obstacle. Some of them are simpler than others. See-saws present the most basic challenge but soon you’re given treacherous slopes, rocky terrain and alternating logs to traverse. There’s a lot to keep in mind and I find the camera does not do you any favours.

For the most part, it’s locked to your vehicle’s back bumper but a click of the right stick will temporarily unlock it. It can be a nightmare to swing the camera around whilst the stick is held in. This is a nasty compromise because the right stick’s movement is used to position your rider when on an ATV. Try doing that whilst the vehicle is moving to see where your front tyres are. It doesn’t feel great or intuitive. 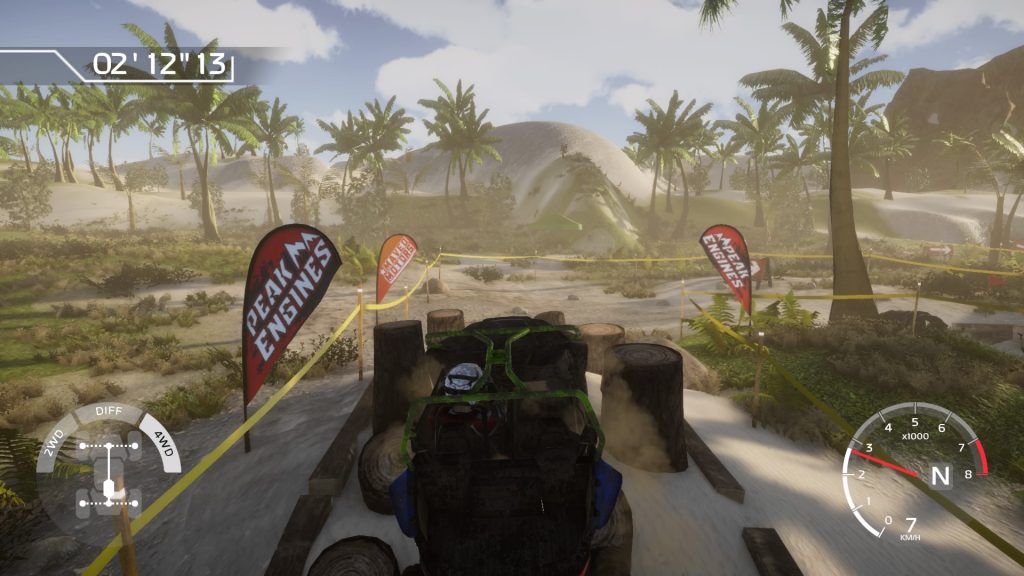 Career mode is where you’ll do most of your dirty work. It has a spiders web structure where doing well in events branch out into other options. You’ll open up more events, unlock parts for purchase and even gain more vehicles. You earn money for placing well and, for the most part, it’s plentiful. This allows you to buy upgrades, make necessary repairs and outfit your rider with some new gear. It’s a fairly standard, if paltry offering that gives you a sense of progression. Sponsors arrive with additional demands and it can be a quick way to bolster your bank balance.

In short, money isn’t a problem but the fragility of your vehicles can be. The tutorial places a big impetus on driving within your means and carefully navigating obstacles. Any hard bumps, landings or collisions are punishable and can ruin your suspension, puncture tyres and hinder your progression through the game’s twisty locales. It does give your runs some consequence but I found the damage model to be a little too severe. At times it can feel inconsistent as you snag something that really should be no problem.

Part of me wonders if I’m missing some knowledge that will tie it all together. Watching a vehicle tip over is devastating and watching your tyres beach or halt in the mud feels soul destroying. In career mode, the time limits are generous but, if you’re trying for gold medals, you need to attack obstacles and maintain momentum. Damage becomes a necessary evil. 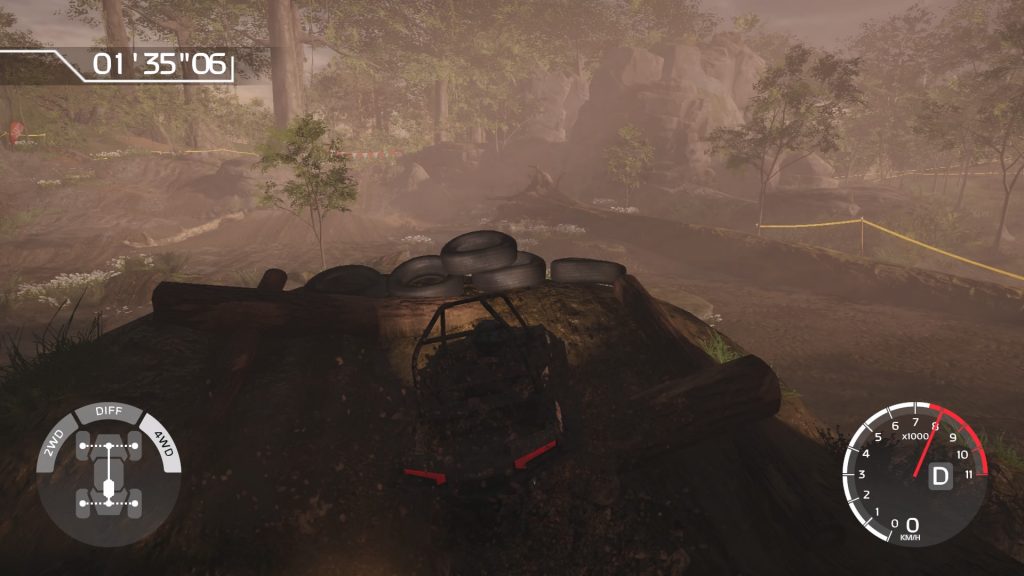 Visually, the game looks fine. The presentation feels fairly standard but the arenas look well built and varied. The tracks are easy to follow and there’s some nice touches with deforming mud and tyre marks. Obstacles are easy to spot due to the red flags pointing them out. Sound work is a little bland. There’s nothing remarkable about it. Engine noises across the machinery don’t tend to vary and the soundtrack is a fairly inoffensive guitar rock effort.

There’s not a flourish to it. Menus are functional rather than flashy. The mode selection is slim with quick races and multiplayer accompanying the career. Perhaps that’s expected for a game that is very much a first attempt. As a first impression, it doesn’t really work. Even when trying to more powerful trucks, there is a clumsy execution to Overpass. I’ve had my vehicle snag on obstacles, get jammed on rocks and generally, I’ve spent more time struggling against the physics than putting a good run together.

Overpass
5 Overall
Pros
+ Environments and tracks are nicely varied.
+ Tracks deform in a nice manner.
+ The game gives you plenty of opportunity to practice runs.
+ A lengthy tutorial to help newcomers
Cons
- Career mode feels a little barren.
- Bland presentation with few modes
- Traversing obstacles can feel clumsy, especially in an ATV.
- You get very little feedback when something's about to go wrong.
Summary
Overpass is a clumsy first effort that tries to explain the basics but leaves the player lacking feedback. The environments are well designed and varied but traversing them frustrates me. ATV's seem especially undercooked and tricky to balance. Career mode gives you something to work towards but it's a slim offering. The ideas are there but the execution leaves me unsatisfied.