From Mobius Digital by way of Annapurna Interactive comes Outer Wilds. Released on Xbox & PC as a timed exclusive back in May, Outer Wilds (as opposed to the very similarly named Outer Worlds also on current release) is set upon a wonderfully rustic alien planetoid named Timber Hearth. Said planetoid is inhabited by a low-tech yet still spacefaring race of multiple eyed bipedal aliens orbiting a sun in fairly close proximity.

You’ll be thankful that the proximity is quite near as if we were looking at real astronomical units, voyages in your spaceship would take considerably longer than the few minutes it takes to get from one side of the star system to another, never mind modelling it in the manner evident here. Distances here are measured in kilometres rather than larger orders of magnitude. 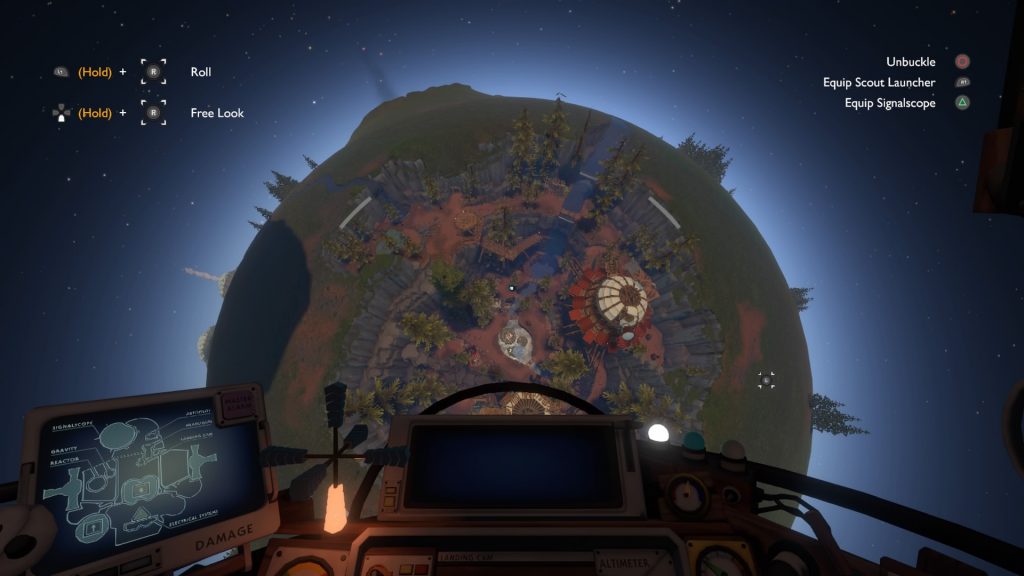 At any rate, it makes for a good game experience. What we have here is an excellent story based planetary exploration game with scope beyond the apparently small solar system. It’s very well done and a great example of less being more. Think of it as a less bloated more focussed No Man’s Sky and you’d be part of the way there.

You awaken besides a campfire with a planet in the distance and a flash in the upper hemisphere that looks a little like fireworks. From the off you can either crack on and get exploring or start toasting marshmallows on the campfire. You even have the option to doze off again if you wish. We’d recommend the former option, starting with the Hearthian sat beside the campfire near you. Your first task is to get the launch codes for your spacecraft from the observatory in the adjacent valley. 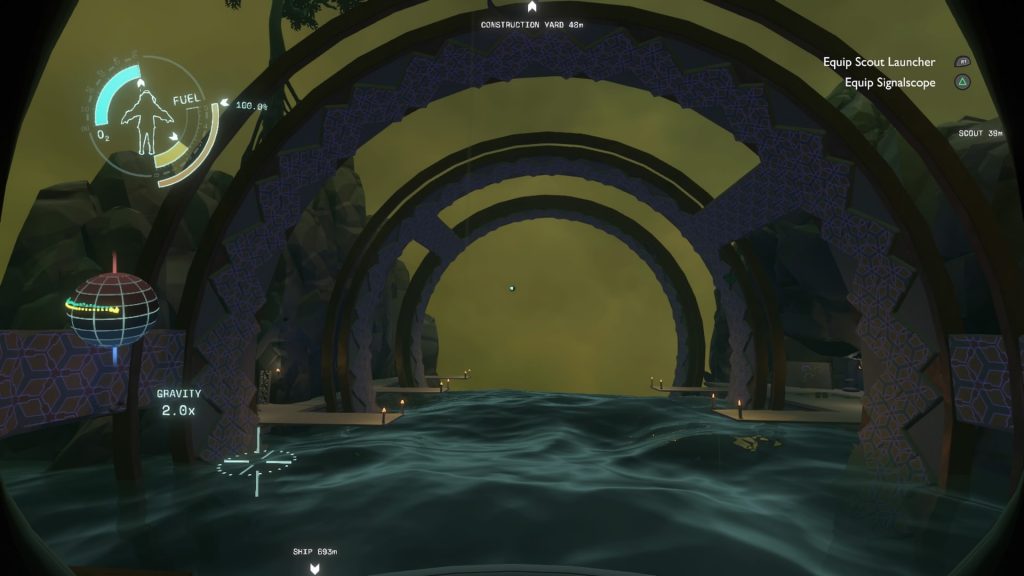 That’s easier said than done on the way there, especially with the sheer amount of distractions en-route. They range from kids playing hide and seek to gnarly old Hearthians regaling you with tales of explorers. These explorers of yore found artifacts in the planetary system that are in the museum attached to the observatory. One is a bust of the alien race that predated yours called the Nomians. It’s inert and nothing more than a pretty sculpture when you head inside, but as you exit things take a turn for the unusual.

This bust’s eyes will flash bright and an energy stream will flow towards you, it’s purpose not immediately clear. Then you’ll regain control and continue exploring, perhaps trying out the model spacecraft or making your way into the cave system to practice your zero-gravity manoeuvring. Then almost as soon as you get started, the sky will go dark and you’ll be consumed by a blue flash. 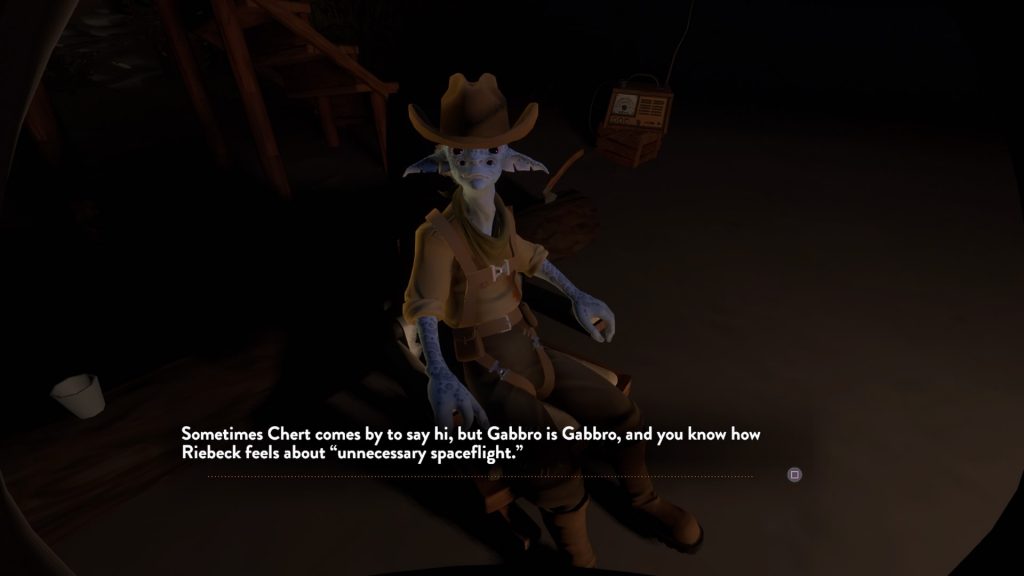 The events of the last twenty minutes or so will replay in reverse and you’ll reawaken next to the same campfire. Looking at the same flash in the sky again. Only this time your memories are intact, and you already have the launch codes for your spaceship. Once you realise events are unfolding in the same way you’ll be drawn straight to the launch pad now you don’t have to go fetch the code.

After a while you’ll encounter a fellow member of Outer Wilds Expeditions who it turns out, is also stuck in a time loop. In a nice mechanic, any significant events that advance the plot are automatically uploaded to your ship’s onboard computer log. It’s a nice breadcrumb trail for you to follow as once again you’re caught up in a twist in the fabric of space where time becomes a loop. Only without Worf or Geordi LaForge waxing lyrical as to what the cause is. 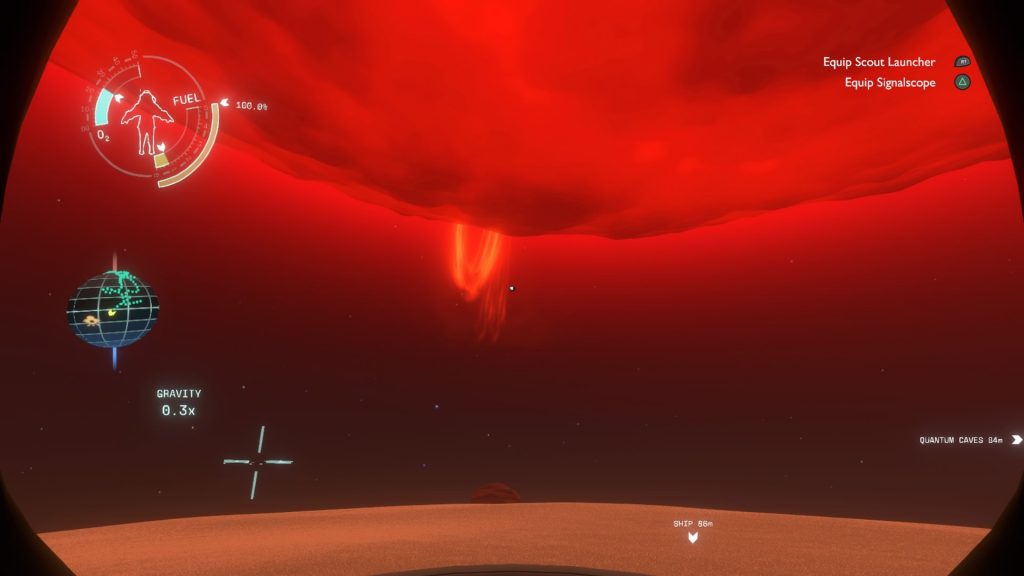 Each of the Outer Wilds expeditionary members you’ll encounter throughout the story has a unique musical instrument and together they make a lovely overarching musical theme that binds the story together. It’s a little Wild West themed, but fits the rustic thrown together feeling really well.

Sure enough, after about twenty minutes the sky will go dark as the time loop begins once again. We won’t spoil it for you by describing it in detail. The plot beats and twists contained in this story are best left for you to discover, that being part of the appeal. Ships log entries carry over from one loop to another thankfully, a convenient device even if your character appears to have no memory of what happened before. 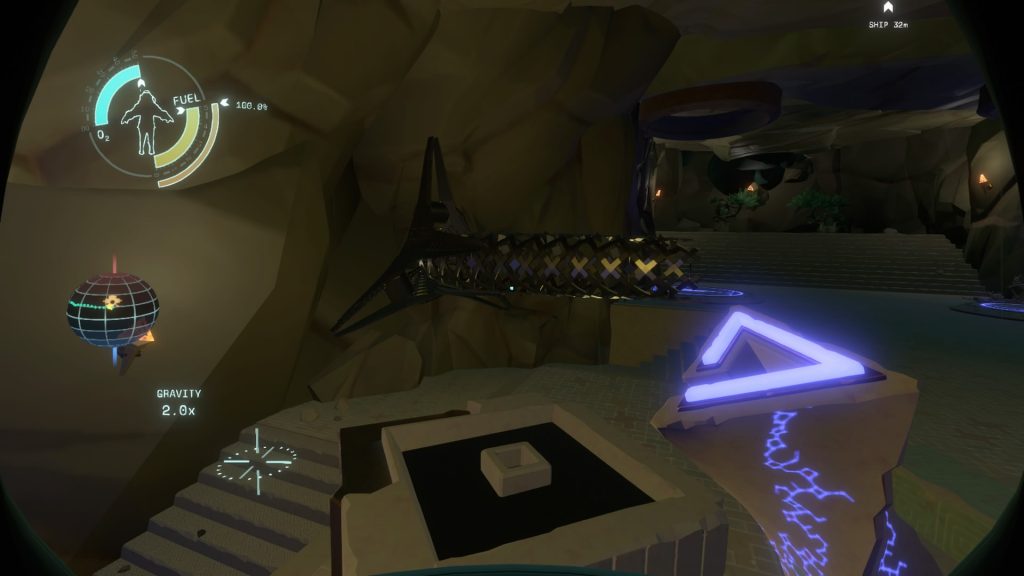 Breadcrumb trail or not, you’ll eventually get stuck unless you’re a wizard at sniffing out the next item to advance the plot here. Thankfully the ship’s log hints you’re not done in a particular area and might want to concentrate your efforts in that area. It’s not unlike a similar mechanic in Super Mario Odyssey where Cappy gives you hints in certain areas if there’s more to find.

Once you land on a planetoid, you’ll get into the habit of suiting up to avoid asphyxiation or freezing to death in the void. Even in places where there is an oxygen rich atmosphere the jetpack in your suit will come in handy to make jumps you’d otherwise not manage. In one early playthrough we exited our ship in a hurry only to immediately expire as we’d forgotten our suit. It was unintentionally amusing but we learned our lesson. 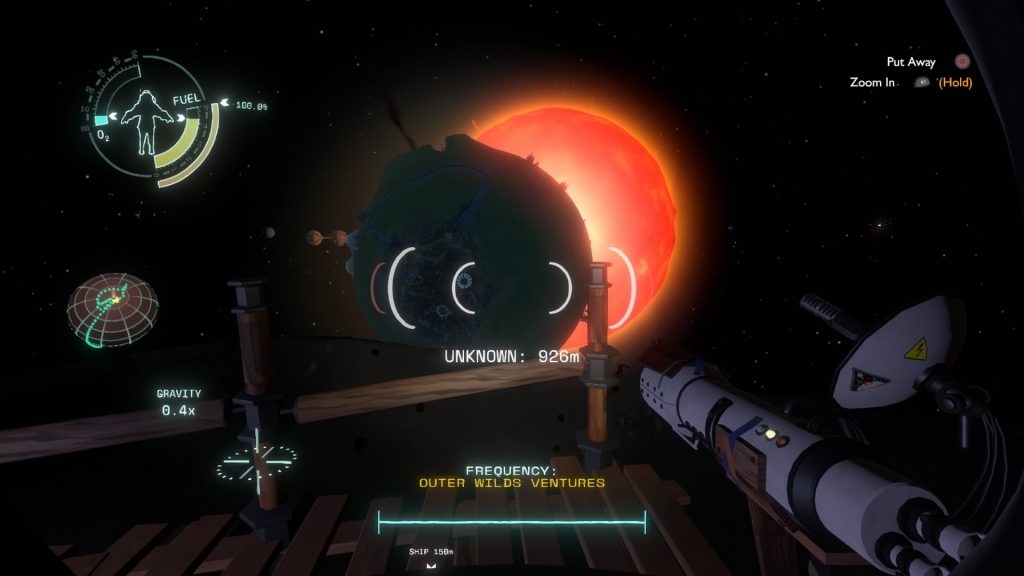 After a while you’ll start to realise a particular musical cue signifies the end of the loop and you’ll soon awaken once again next to that campfire. This doesn’t get old, you’ll be eager to continue exploring. In our case, despite our resolving we’d be heading up to bed another couple of loops ensued before we finally finished for the night.

You’ll control your ship by way of an initially disorientating rocket booster in combination with manoeuvring thrusters, but after a while this almost becomes second nature. Just don’t get too reliant on the autopilot as you might plot a course and it’ll plot a straight-line course. Never mind if the sun is in the way, you’ll find your loop ending prematurely. You’ll soon get used to navigating so as to make sure your path doesn’t include any solar incursions once you engage the autopilot. 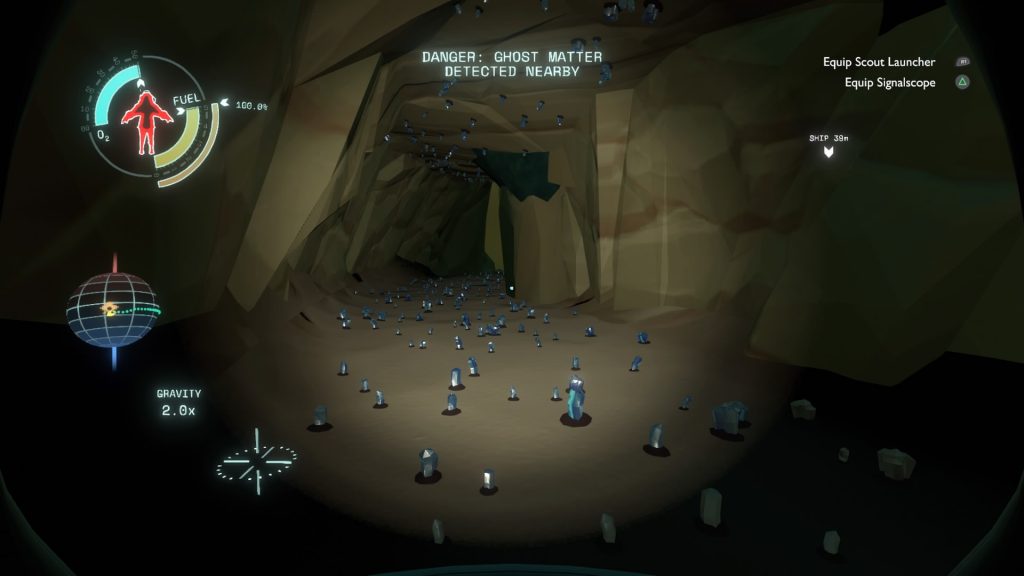 Outer Wilds is often beautiful, even on our pauper’s base PS4. You’ll realise you’re getting close to the end of a loop and sometimes just stand on whichever celestial body in the solar system you’ll find yourself on. This is a game of moments and it’s nice to sometimes take pause knowing that you don’t have long until the cycle begins anew.

We managed to land without incident most of the time, but once in a while a rough landing led to our ship being damaged. In one case we repaired all the modules but wondered why we couldn’t take off. It turned out our fuel tank had been venting since our wayward exit from Timber Hearth and no number of repairs would resolve the fact we had no fuel. 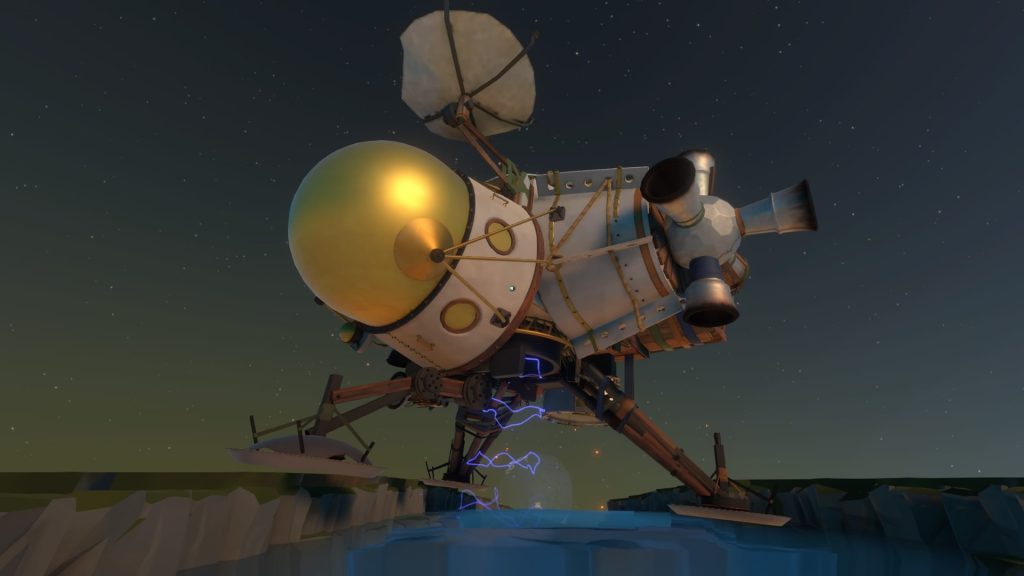 In conclusion then, Outer Wilds is an exquisitely crafted planet hopping mystery adventure you’ll delight in playing. The seemingly sparse solar system isn’t at all as your journey will take you from one end to another. Even if your current exploration comes to nothing, you can have another go once the loop begins anew. As we mentioned, it is possible to get a bit stuck, but the in-game hints are sufficient you’ll find yourself on track again soon enough.


Outer Wilds
8 Overall
Pros
+ Excellent plotline across multiple loops
+ Genuine sense of discovery
+ Often beautiful and music very evocative
+ Repairing your ship if you damage it reinforces ownership
+ Space vehicle travel is challenging enough but makes sense eventually
Cons
- Autopilot can be a bit wayward. What's that glow? Oh, it's the sun!
- You can end up hopelessly stuck sometimes
- Piloting your ship perhaps a little overwhelming to start with
- Sometimes a promising exploration can be cut short by a loop ending
- Aliens don’t necessarily need to be bipedal humanoids
Summary
Outer Wilds is a wonderful exploratory adventure across a solar system. A delightful excursion. We just hope it isn't lost in the mad number of releases at this time of year.