In hindsight we should have politely declined One Night Stand rather than what we actually did in saying we’d do it. When it showed up on the PlayStation blog we didn’t like the look of it then. Though being published by Ratalaika we figured it’d be a quick review. Sadly we were mistaken.

One Night Stand opens much like every morning at ours, in a blurry fug until we drag ourselves out of bed into the shower. In the case of this game you’re awoken by your phone vibrating as you fight off a hangover. The eponymous one night stand writ large with a young woman asleep next to you. 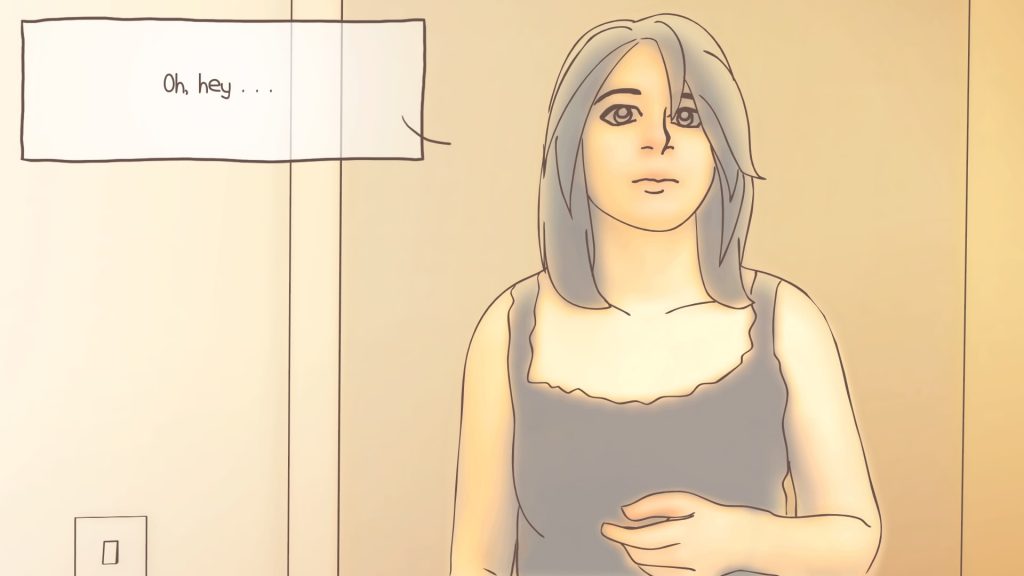 One Night Stand has the feel of a slightly more interactive visual novel with aspects of Groundhog Day as events unfold in much the same way each time. Depending on your dialogue choices and actions with incidental items you’ll reach one of a dozen or so endings in fairly short measure. ONS is very short unless you find one of the non-awkward endings at least.

In our first playthrough we were diplomatic in terms of our responses to the girl we never managed to figure out the name of, let alone which bar we’d met in. Her clipped responses when it came to the subject of our friend would seem to have indicated that he was the date that stood her up. Our character being the guy she ended up with. At any rate we found ourselves out on the pavement by way of our non-commital stance. One ending reached and a picture on the mobile phone in the menu was showing to denote our final outcome. 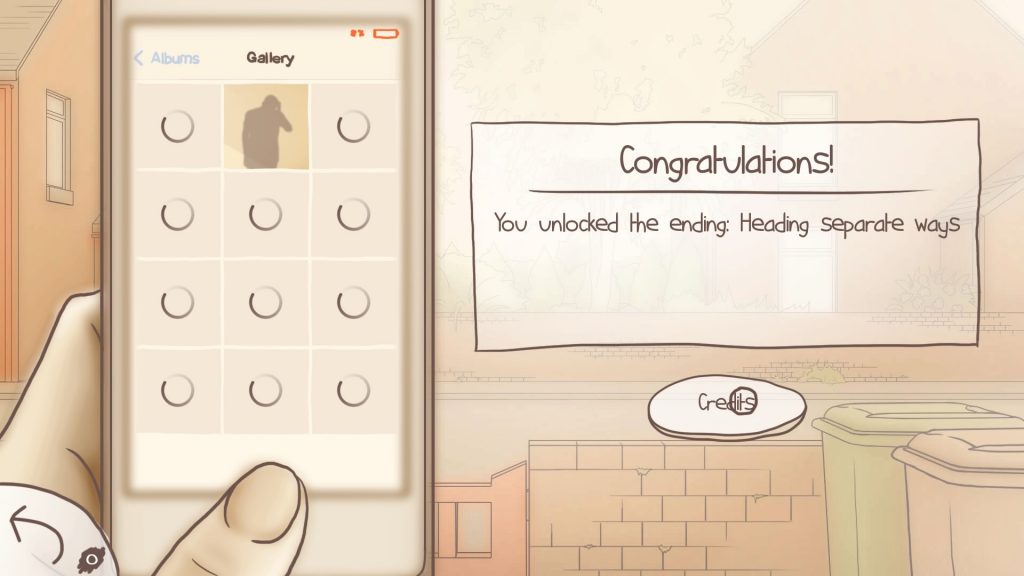 Moving swiftly on to our second playthrough we went with brevity in terms of our responses and made a swift escape. Another ending reached.

Here’s the thing though, we didn’t feel anything either way. Perhaps this reviewer is far too old for us to feel any particular empathy for the situation. We’re way past one night stands put it that way, our primary concern being getting the kid up for school as opposed to awkward small talk.

Our encounters with the young woman reminded us of the faintly voyeuristic tone we felt while playing the opening chapters of Life Is Strange. In this case the young lady being young enough to be our actual daughter. Her initial response in every playthrough is to flee in horror, no doubt the dynamic would be different still waking up next to a gnarly middle aged fella. 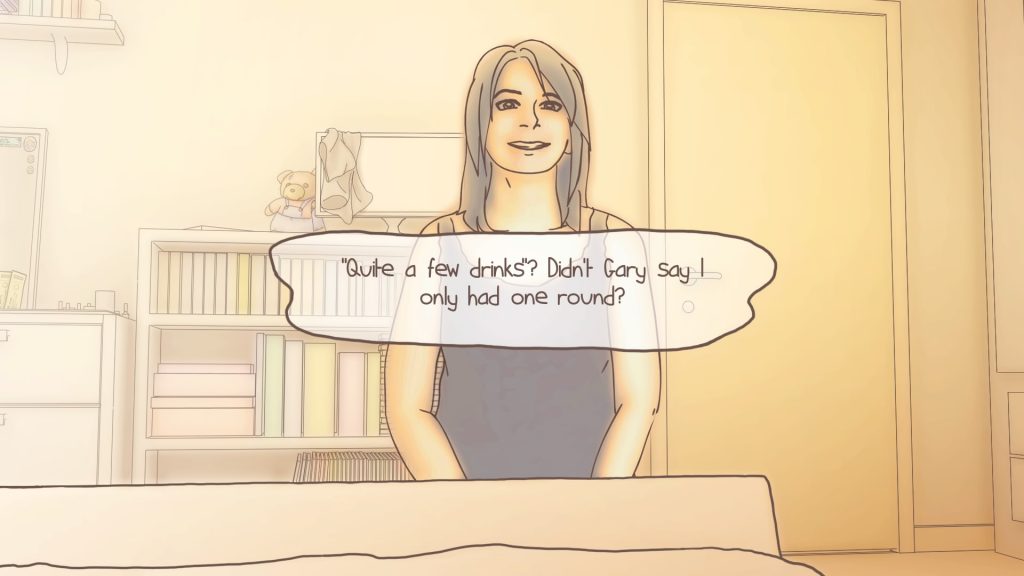 As it is, it’s hard to put ourselves into the shoes of a young man since our formative years were fairly uneventful on the drunken liaison front. We were the one that made sure a lady got home safely as opposed to the scenario that plays out here over and again. We won’t talk about the choice of film on one subsequent sober date, but she didn’t call us again.

Being Ratalaika the trophies are straightforward enough but we don’t feel any compulsion to see them out as there’s no real impetus to see the other endings. There’s not much game here and calling ONS that is a stretch. We’d take poring over a spreadsheet from another ONS instead, in this case the Office of National Statistics. 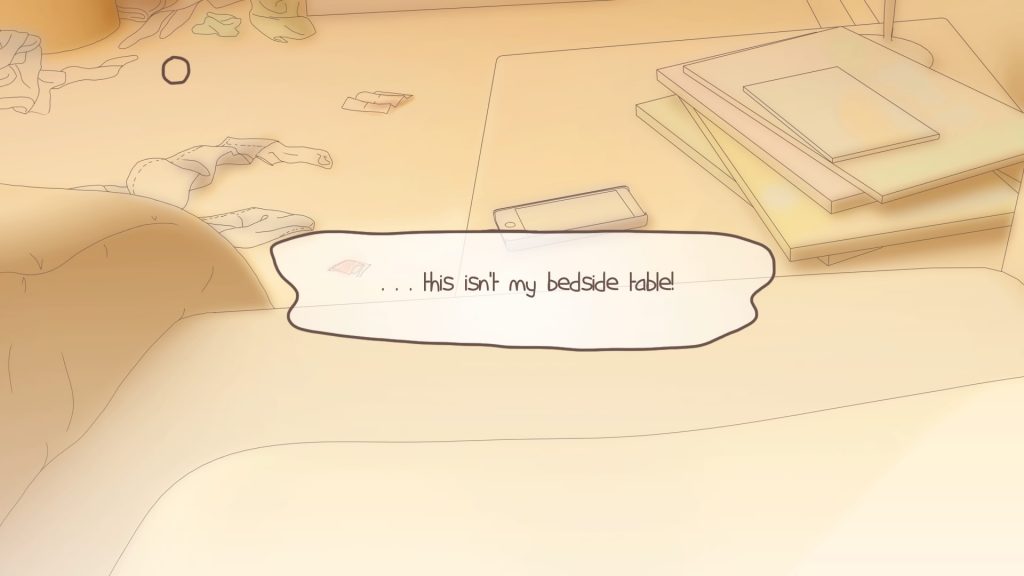 Graphically spartan with a hand-drawn aesthetic, ONS  is resolutely indie, having released on PC three years ago. PS4 is probably not the best fit for this. Nor is this reviewer unfortunately.

One Night Stand is an odd thing in terms of it being a depiction of a scenario we’ll likely  never find ourselves in. Yet at the same time the execution leaves us cold with no particular interest in seeing how our choices would pan out. It’s hard for us to recommend as a result. For anyone still intrigued, the bizarre scenario of stealing your conquest’s knickers and getting dressed hurriedly is a potential outcome.

Cons
- Barely a game
- Quite dull really
- Unrelateable for many
- Data from the actual ONS is probably more interesting
Summary
One Night Stand isn't a great showing, a Ratalaika game worth swerving, straightforward trophies or not.