We never have to wait long for a roguelike 16-bit action adventure game and One More Dungeon is the latest one to arrive on PSN after a couple years of floating around on Steam.  It was put together by Stately Snail, a two-man Russian studio, and is available now as a cross-buy title for PS4 and that Vita that you’ve been ignoring.

Marketed as a cross between an old-school FPS and an RPG, the game has a look that is half-Doom (the original, not the recent one) and Minecraft and it drops you into the first of eight levels, each of which is procedurally-generated and occupied by monsters.  Luckily, you’re armed with a melee weapon and a staff which shoots magical bolts.  With these weapons you’ll blast your way through each stage, looking for the boss which will drop a key that will allow to explore the next dungeon.  It’s all pretty simple stuff. 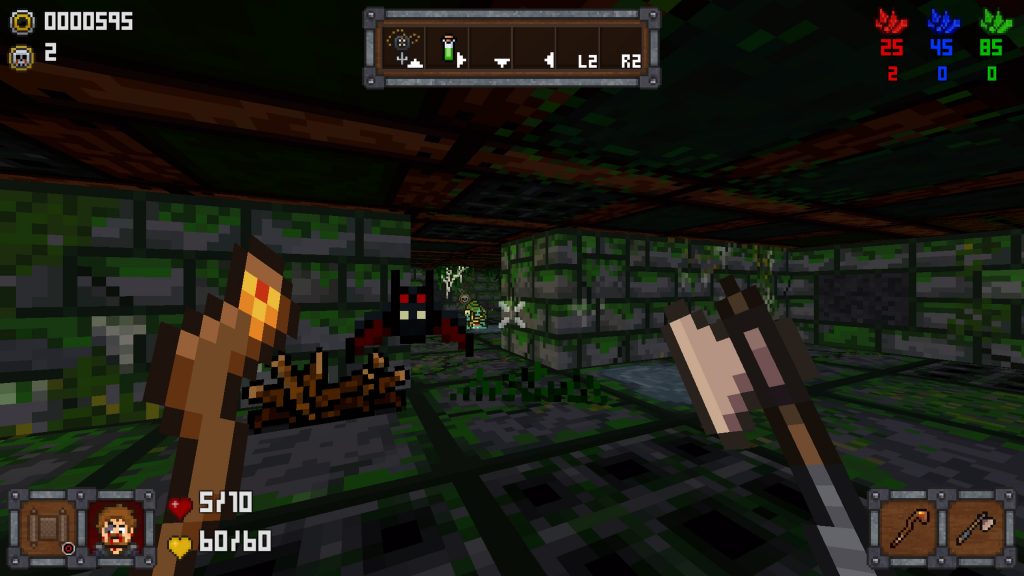 Along the way you’ll find new items, such as weapons or artifacts that offer you extra abilities.  Shrines offer you a permanent health increase, which is welcome, and you’ll also come across chests to unlock, crates to smash and shopkeepers to buy from, all in the hope of beefing up your guy.  Those shopkeepers will be asking for coins which are pretty rare but beyond that, there’s not too much else to worry about in terms of gameplay mechanics.

The game’s first impression might produce mixed reactions in people.  I’d be shocked if I’ve played less than 30 roguelike games on the PS4 and so it’s easy for me to be a bit jaded now.  Some have been great, some average and plenty of them have been poor but the key to making a good one is to make sure that, most importantly, your game is good and also that your roguelike mechanics are sound and promote a sense of progress.  One More Dungeon doesn’t quite make it on either count. 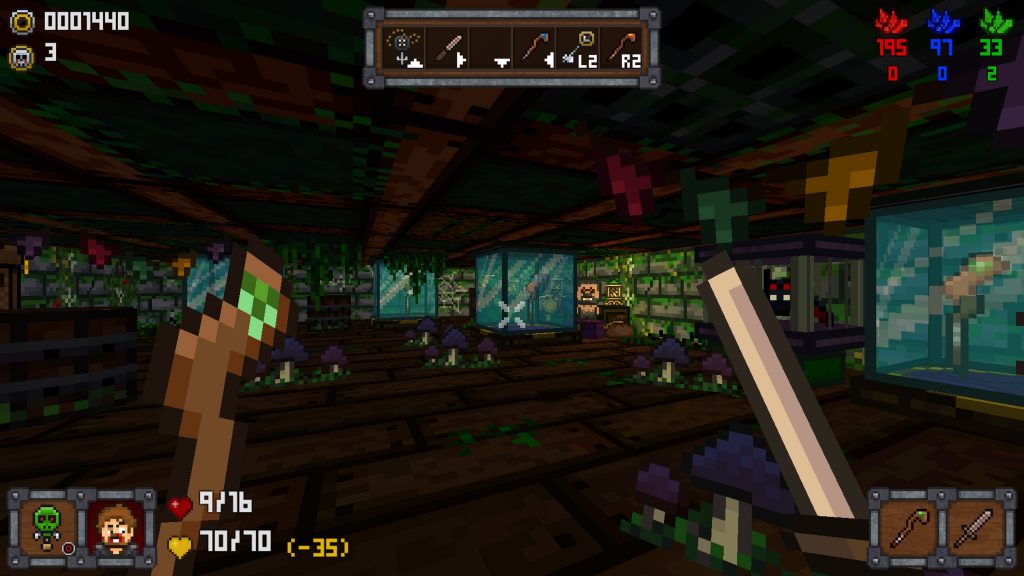 The game itself is let down by its old school gameplay mechanics.  The lack of any kind of auto-aiming means that lining up your shots is a massive chore and given that the sensitivity options for that jump in increments of twenty, it’s not easy to find a perfect level.  Enemies tend to be quite weak and slow which offsets it but that doesn’t make for a compelling FPS in an age where enemies are usually hiding behind cover and trying to outwit you.  The time for enemies that just move in a straight line towards you has probably gone.

On top of that, we’re also kind of over procedurally-generated levels.  Algorithms do not create compelling levels and struggling through four rooms full of hard to aim at enemies for literally no reward can get boring at times.  The game is essentially just a set of mazes and while there is a very handy map button to show you where you’ve been, it doesn’t stay toggled on in the Vita version which is a shame as it’s usually worth leaving on for quite a few seconds as you figure out where you need to go. 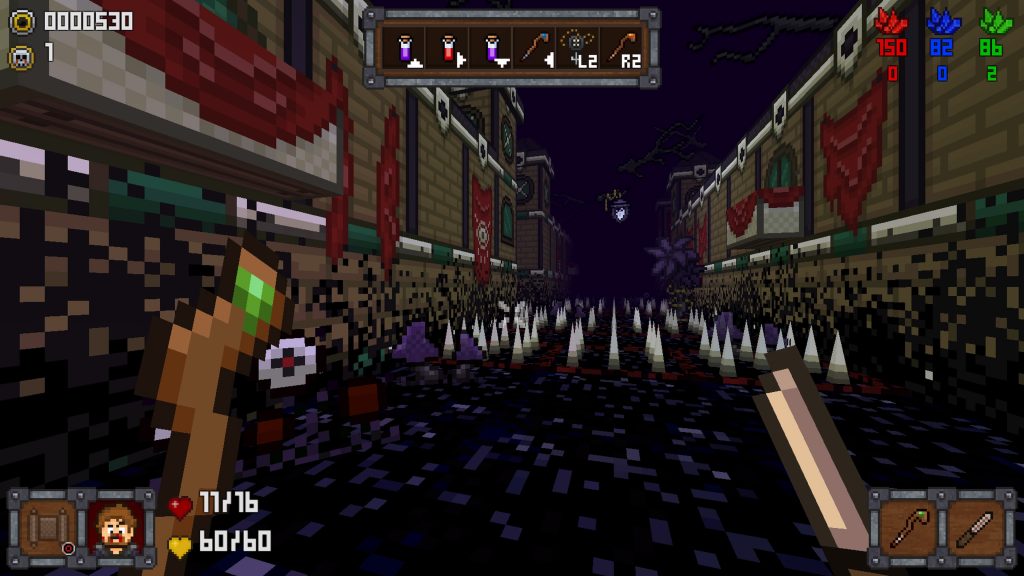 The creaky visual style also has its own disadvantages.  The lack of detail can make it hard to see threats right away and the game does that thing where objects are always facing towards you even when you rotate around them, which can make finding your way around a little disorienting.  It’s far from being a major issue but One More Dungeon just isn’t very pleasing to play.  This would be tolerable if the roguelike stuff was on point but it’s not really.  Outside of the game, the only progress that you keep comes from points that you spend on in-game modifiers.  You’ll unlock the most useful two very quickly though.  After that all the modifiers stop being as good.  Some even make the game much, much harder.  Which is a silly thing to do.

Progress within the game dies with you but even then, it was never much progress anyway.  New weapons usually offer no real advantage over others.  You might have a staff that uses one red crystal (crystals are ammo) to do one point of damage.  A new staff might do three points of damage but will probably use three lots of ammo.  Or swords that you pick up will have no real advantage over the weapon you might already have.  And on top of that, there are potions to pick up, including poison ones.  But all these do is poison you.  And given the game’s cumbersome inventory handling, this isn’t a good thing. 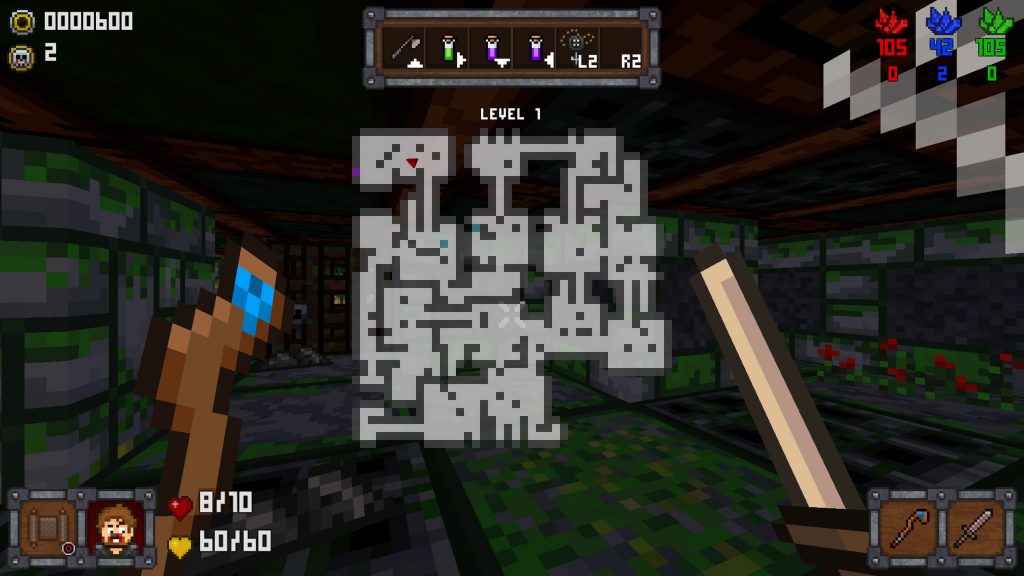 There is a simplicity to the game which initially gives it some promise though.  If you get the right pick ups at the right time, there is sometimes a sense of progress and that can be rewarding but most of the time I felt a bit let down by the level generation and found myself battling through far too many rooms and corridors without feeling like my character was improving in any way.  And then death would invariably come at level three.

One More Dungeon might have its fans but Vita and PS4 owners looking for some roguelike thrills have so many better options these days and unless your game has something really special going for it, throwback gameplay and graphic design like this just feels like a real lack of quality.

Cons
- Controls don't feel good
- Poor graphics
- Roguelike mechanics are under-developed
Summary
One More Dungeon doesn't do anything well enough to justify the tired graphical and gameplay style choices it has. The core gameplay isn't great and the roguelike elements don't give you much of a reason to keep playing.

One thought on “One More Dungeon – PS4/Vita Review”