If you told me a year ago I’d be finally getting into fighting games, I would’ve probably laughed. As a kid, I woefully played Street Fighter on the Amstrad CPC and could not wrap my head around the genre. I’ve seen it more as a spectator sport but now I’ve got some experience under my belt. AOne Games have been steadily working on Omen of Sorrow and, after a few reveals last year, it’s finally ready for consumption. 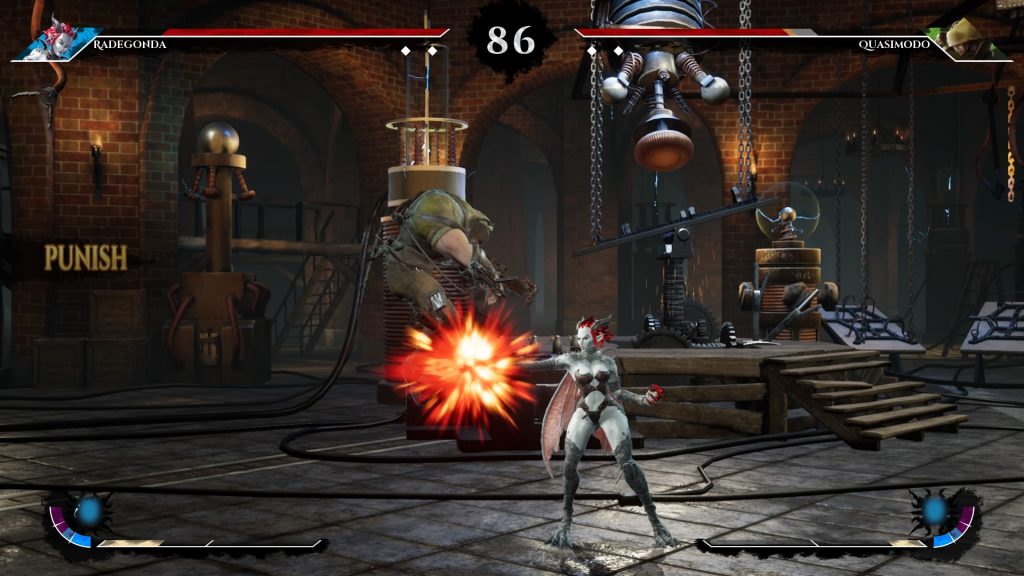 As fighting games go, Omen of Sorrow isn’t heavy on systems. You have an EX meter which you can spend on special moves and a health meter that does regenerate, encouraging you to keep the pressure on. The Fate and Fortune system effectively favours aggression. The more hits you take, the closer to a doomed state you become. This limits your ability to dish out punishment and keeps you on the defensive until you can recover. It’s simple to grasp and, as you can tell, the combination of these systems skew more towards all-out attack.

What you get with Omen of Sorrow is bouts that can end quickly. It reminds me of how Tekken fights can be swift and flashy, even if this fighting game isn’t big on juggles. It’s a four-button control scheme with heavy and light attacks covered for punches and kicks. There’s a dedicated throw and EX button and blocking, predictably is achieve by holding your character back. 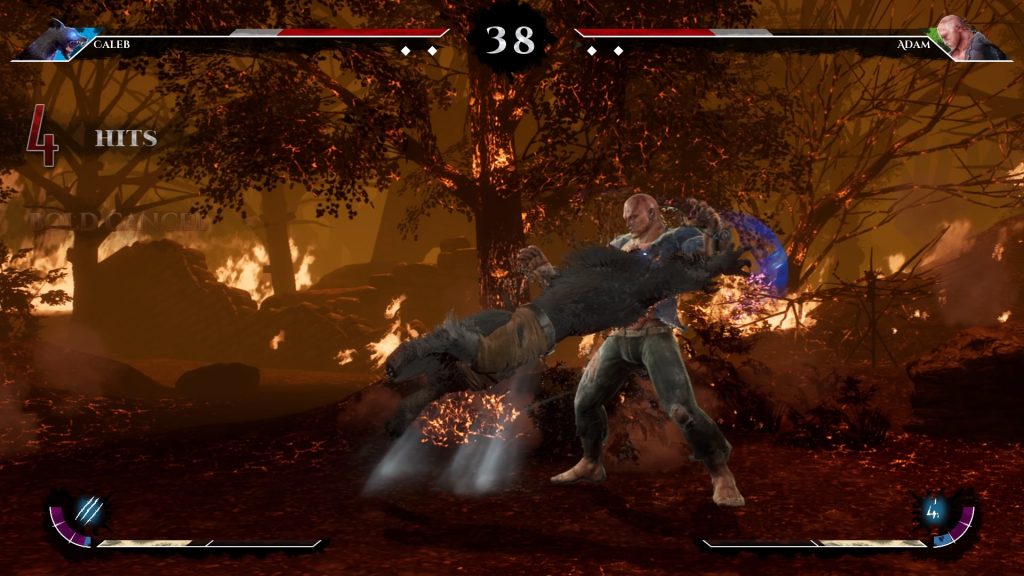 As a relative newcomer, Omen of Sorrow‘s controls are easy enough to handle. The little execution I have becomes useful but I find this game to be quite friendly to mashers. With the emphasis on pressure, forward momentum is achievable. Against the AI, I’d consider it a casual experience. The default medium setting is incredibly forgiving as I chew through rounds in a matter of seconds. The recharging health does allow you to take some whacks or find some space to hunker down. I found the AI rarely put me under the same pressure I could exert over it. Even bringing it up to Very Hard, I could saunter my way through the arcade mode without losing a round.

Whether you see this as a positive or negative is down to taste. I do enjoy fighting the AI and challenge does come in the lengthy Survival mode. There you can choose a gauntlet of 15, 60 or 120 grueling fights. It’s where the AI does provide an attritional prospect that will wear you down if you’re not careful. If nothing else, the offline content does provide a comprehensive chance to train and experiment with the game’s 11 characters. 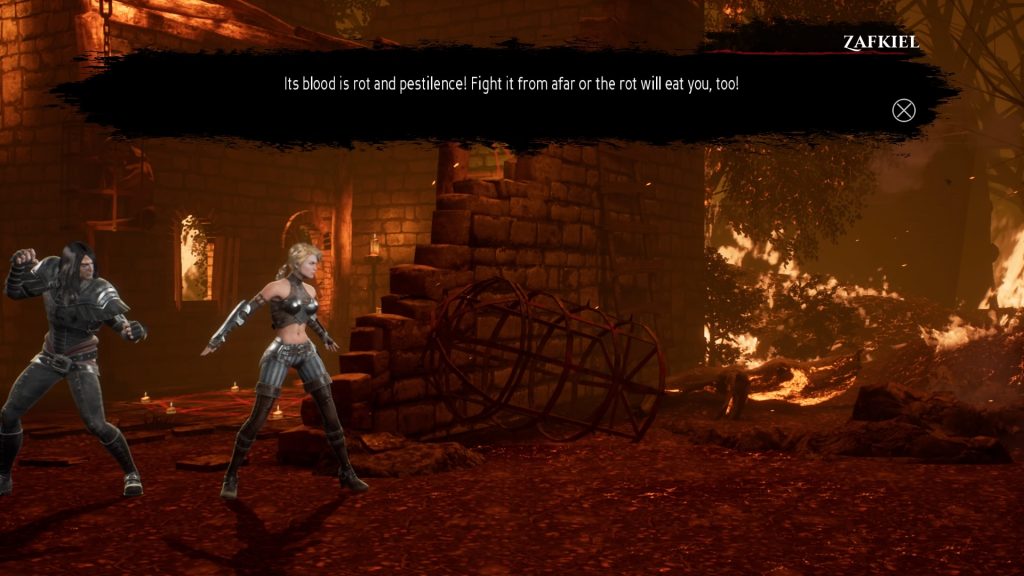 They’re given adequate screen time in a Story Mode which, unfortunately, suffers from a lack of presentation. All the cast are pulled from various tales of folklore. Vlad the Impaler and Erzsebet Bathory are portrayed more like the legend rather than the reality of historical record. Frankenstein’s Monster, Adam gets represented and his branch of the story centres around trying to find aid for his stricken father. All three branches of the story lead towards the same MacGuffin. Everyone is seeking to find or regain The Chronicle. It’s a magic book that holds some kind of untold power.

It’s not told very well. The narration on offer is vague and it’s delivered in a stilted manner She is accompanied by some rather lovely staging, mind. You get a good look at the game’s arenas whilst these segments play out. I much rather prefer that to the text-based waffle you’re given before each scrap. These fall very flat and take themselves very serious. It’s very hard for me to care about Omen of Sorrow’s story.

At least the cast are mechanically varied and interesting. Gabriel and Vlad seem to fit a similar vein. Gabriel has some damaging dashes and projectile attacks to attack from a distance. Things get more interesting the further you delve into the roster. Imhotep lacks agility but, his lack of jumping and dashing is substituted by his ability to stretch to gain range. He also can summon the elements and the undead to help him. Dr. Hyde can concoct potions to afflict his foes with poison. It takes time to trigger but can help turn the tide. 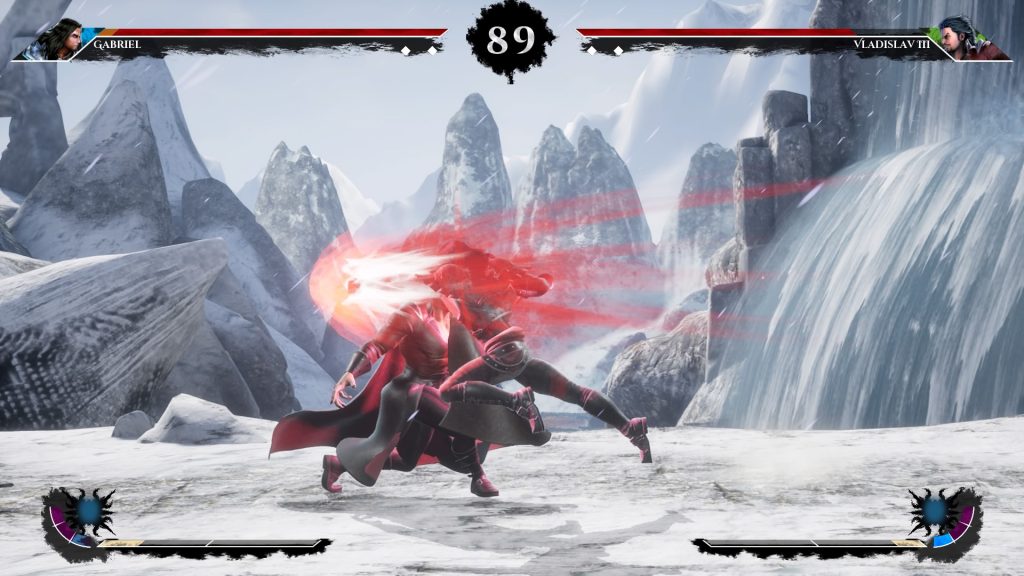 There’s more eccentricities from the rogue’s gallery. Quasimodo’s hunched stature limits his range but he’s tricky to hit. Radegonda is the most airbourne of the crew. A winged succubus, she can sustain flight and opt to dive in as you see fit. With a small roster, it’s impressive that they’ve managed to produce such depth. There’s not a lot of crossover with similar characters having differences to set them apart. It does encourage players to experiment and find a favourite. You’ll be seeing the full cast fairly frequently so you’ll have ample opportunities to develop counters. You can take this knowledge online in ranked or private matches which, at the time of writing, performs fine enough.

There’s an enjoyable core to Omen of Sorrow that manages to shine through a unique set of characters. Presentation is dull and the premise isn’t truly capitalised on but there’s enough here to keep me coming back.

Omen of Sorrow
7 Overall
Pros
+ A relatively small but interesting roster.
+ Fighting can be fast, frenetic and rewards aggression.
+ Plenty of offline content to devour.
+ Controls are responsive and simple to grasp.
Cons
- Story mode is presented flatly in a very self-serious tone.
- Some stages appear bland and muted.
- Fighting the AI brought little challenge and lacks aggression.
Summary
Omen of Sorrow is an intriguing fighter whose simplistic AI is surprisingly accommodating for newcomers. Fighting is easy enough to grasp but a healthy online community could help providing some impressive bouts. The story and presentation lacks some punch but the varied and nuanced characters help provide some fascinating match-ups. There are some rough edges but there's satisfying combat to pull you through.