From Woblyware comes a new Metroidvania style game in the form of Omega Strike. It’s got retro visuals, it’s got chiptune music, but it does bring some gameplay ideas to the table. 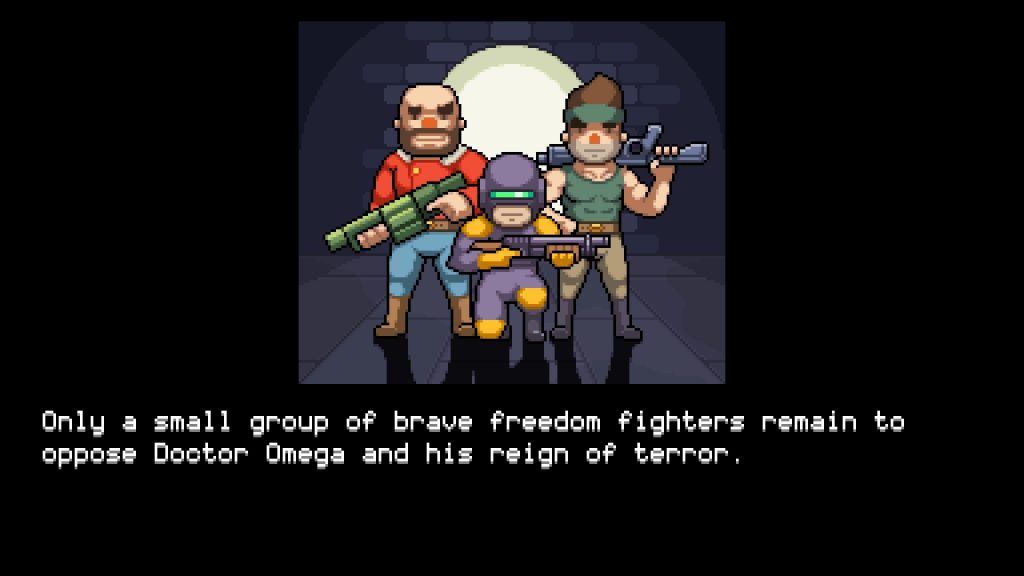 Dr Omega is attempting to take over the world with his army of mutants. It’s up to three brave freedom fighters to stop him. You play as all three characters and you can switch between them at the touch of a button. Each has their own special abilities and weapon, making them vital for progression.

Sarge has a machine gun which is rapid fire and has decent range. He doesn’t start with any abilities but quickly learns to roll under obstacles. Bear has a grenade launcher which has an arc to it as it bounces along the ground. He can also push large blocks out of the way. Dex has a shotgun which has a shorter range but packs a punch. He can double jump making him great for getting around the levels.

After your first boss fight you actually lose Bear and Dex and have to play as Sarge alone for a bit. It’s an odd choice since you start the game with more options but you will progress and see areas where your friend’s abilities will help you, once you get them back. Each character also learns another ability later on, opening the world out even more. There are only four or so areas in the game which you travel between by helicopter so it’s not the largest Metroidvania world you’ll see but there is some backtracking to use your new abilities, either to simply progress or to collect hidden items or chests. 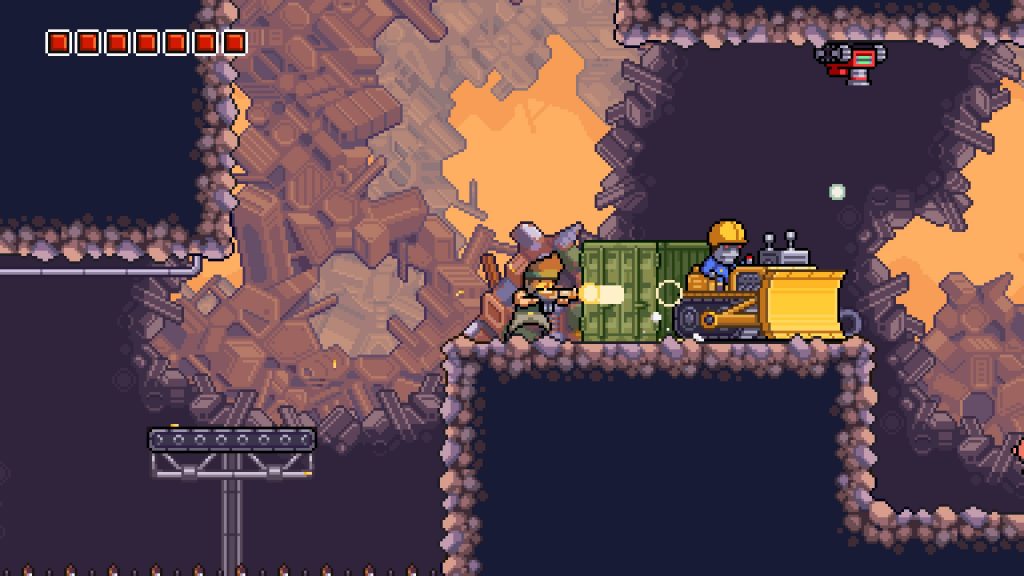 Chests contain a large amount of gold, which also drops from enemies or destructible items. Otherwise you’ll find life cubes which you can trade four of in town to extend your life meter. It’s here in town where you’ll also be able to spend your gold on weapon upgrades (power and range) and health items. There are only a couple of upgrades for each character in each category so, although they leap up in price for the second upgrade, you’ll be maxing out each character pretty quickly.

Each area is made up of rooms and you have a Metroid style map to help you navigate. In each room will be enemies roaming around and platforms to manoeuvre. It never gets too complicated with most enemies patrolling a set pattern, the more threatening ones stopping to take a shot or two at you and the platforms being pretty straight forward with some dropping from beneath you or lasers to time your jumps between being as tough as it gets. 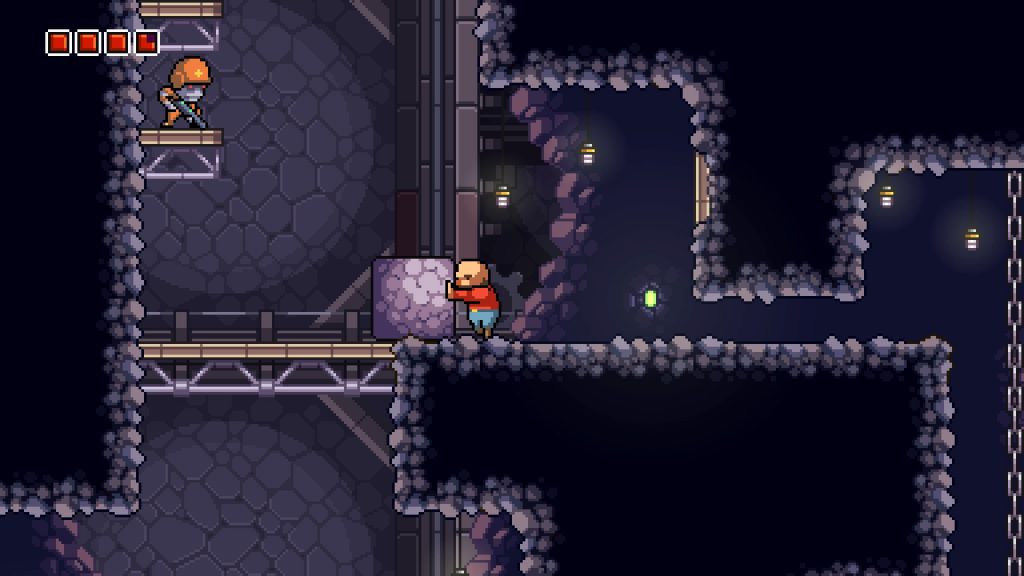 In fact I played through the game on Normal and found the whole thing to be pretty easy. That’s not to say I didn’t die, but worrying for my life was a rare occurrence. There are manual save areas which you can utilise and if you die then that is where you’ll respawn, there are no checkpoints. The one exception is if you die to instant death (such as one of the aforementioned lasers) in which case you’ll return to the beginning of the screen, taking a little damage. There is a Hard difficulty but every time I selected it it would start me on Normal so I’m not sure what is going on there. I assume you just take more damage.

Boss fights are also pretty straightforward. There are quite a few but each only has about three attacks to learn and avoid but I think I died on two throughout the whole game, possibly. The majority, including the final boss, were killed on my first attempt, with most not even running me close. When I did die replaying the screens I’d already beaten wasn’t incredibly fun but at the same time I would have welcomed more of a challenge.

I finished the game, 100% with all the hidden items, in just over six hours which for the price isn’t too bad. I enjoyed my time with Omega Strike but it doesn’t do enough to stand out. The character swapping should be the selling point but I found myself sticking to one character (Dex) more often than not, only switching when I needed an ability or a specific character’s weapon was ideal for a situation. I would have preferred one character with a selection of guns I think, rather than swapping because I needed to push this block or roll under this gap. 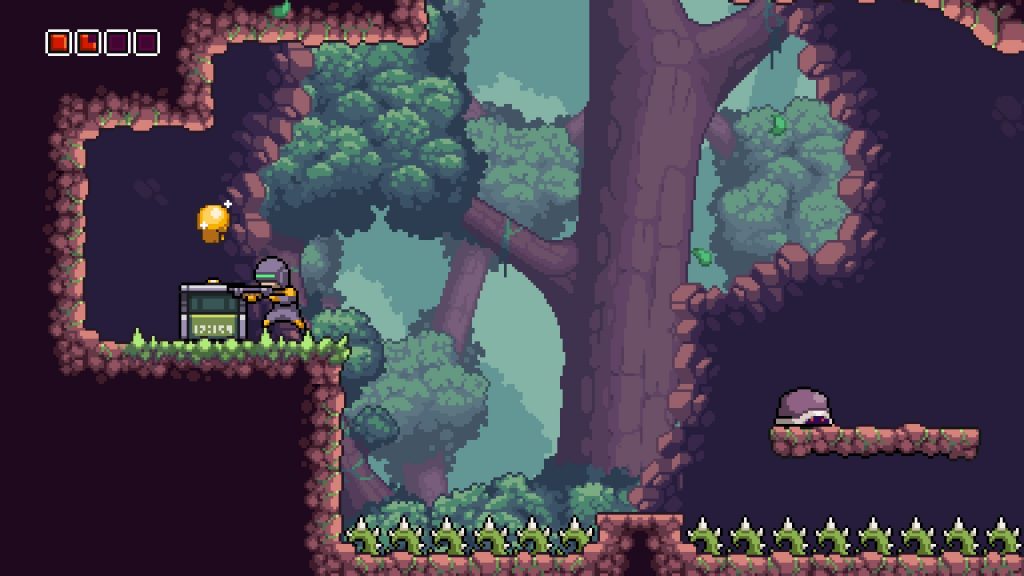 The presentation is decent but nothing we haven’t seen before many times in the indie scene. Music is catchy without burrowing into your brain which kind of speaks to the whole game itself. You’ve seen it all before and it’s not going to leave a lasting impression but that doesn’t necessarily make it bad. For the price you can get about six hours of fun out it and if it lands on PS+ then you should definitely give it a try, but Omega Strike doesn’t quite do enough to make it a must play.

Omega Strike
6 Overall
Pros
+ Character swapping is somewhat unique
+ Hidden areas aren't too obscure
+ Some good, if unoriginal, presentation
Cons
- Too easy in general
- Character swapping is underused
- Doesn't do enough to stand out
Summary
Omega Strike is an enjoyable, if straightforward, Metroidvania. The character swapping mechanic is a good idea but is underutilised by the level design and it's a tad too easy. You'll enjoy the time you have with it but it won't leave a lasting impression.