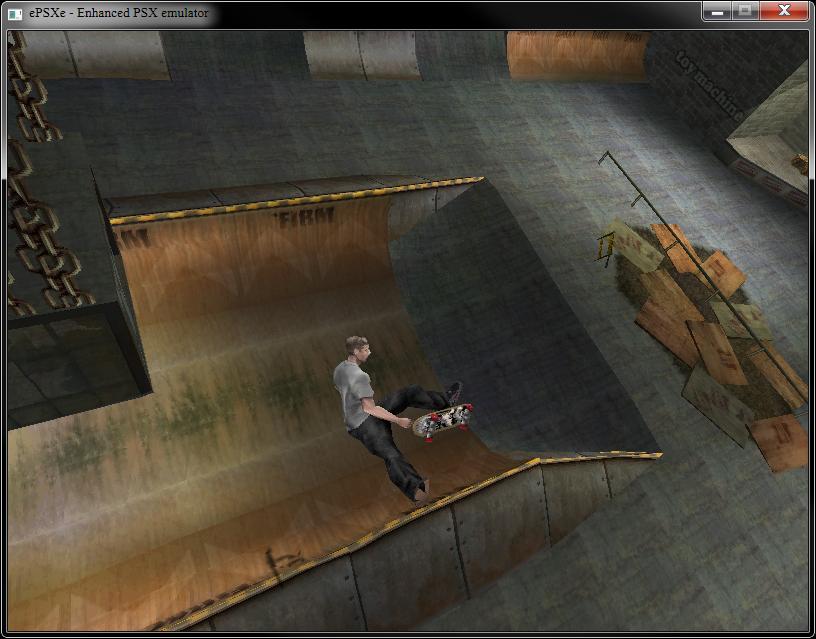 For me, that will always be the demo of Tony Hawk Skateboarding (the European renaming of Tony Hawk Pro Skater).  It came free on the front of some PlayStation rag and I fired it up with as much anticipation as I’d fire up ITV on any given night.  None at all.  A few plays later and I’m awaiting the full game more than anything ever.  I played that demo over and over until I’d mastered the game mechanics as much as possible.  I knew that level like Rihanna knows the back of Chris Brown’s hand.

Elissa Steamer in the warehouse with the skateboard. Probably not the Cluedo solution you were looking for.

The full game didn’t disappoint and I played it to death, beating it with every character and setting all the best scores on the game’s high score table.  Every level, every trick, every hidden tape… I knew everything about the game.  Well, almost everything.  One thing I could never have guessed was that Activision, lords of all that is unholy, would ruin the franchise so badly that a new Tony Hawk release would be as welcome as Tony Hawk releasing fluids into your face and so these days in, a mere decade and a bit after Neversoft’s extreme sports masterpiece I honestly couldn’t give two fucks about what the Birdman does next (either in real life or in virtual form).

The thing is, I just picked up a replacement PSP and, with a little bit of coercion it plays this old favourite from a PS1 disc image.  I have the disc, the means to convert it and thumbs with which to play it.  So how does the game that introduced gamers to such things as the kickflip (because admit it, we would never have known if it wasn’t for this game) hold up twelve years after its release?  I’ve been painstakingly researching it and the short version is ‘really well actually!’

‘you are still pulling off’

Firing up THPS for the first time is much like firing up any modern game.  You get the PlayStation logo, the Activision logo, the Neversoft logo, an intro movie (featuring videos of the various skaters represented in the game), a memory card check, a ‘press start’ screen and eventually your main menu.  Phew.

I jump right into Career Mode and pick Bob Burnquist.  He’s got great stats – not as good as Tony Hawk but not as smug either – and I seem to remember him being my first choice back in 2000.  Rodney Mullen hadn’t been introduced to the series yet.  After sticking with the default board, trucks and wheels I button-press my way into the first level.  Warehouse: Woodland Hills.  What strikes you as the level loads up is the list of goals.  There are just five.  Get some points, smash some boxes, get SKATE, find the hidden tape and get even more points.  None of this combo shit and wacky stunt bollocks that the later games became obsessed with.

‘much shorter but also it means that you concentrate’

After my thumbs struggled to get used to using a d-pad again (seriously, has the 360 killed that little skill or what?) I get reacquainted with the warehouse.  It’s as I remember it, with a big ramp leading to a half-pipe and a few other ramps that I always stayed away from because of their limited scoring potential.  I take down the goals fairly quickly.  This still plays well and feels comfortable even if it is missing the manuals and reverts of the first game.  That means the combos are much shorter but also it means that you concentrate on the actual tricks and not how to link them.  It feels a lot more realistic, even if you are still pulling off moves that would make most skaters weep in their pants.

I hope that rucksack contains a lot of bandages.

Graphically, it’s a little rough.  The PS1 was a complete paradigm shift for console gaming, giving you proper polygonal 3D and more or less signalling the end of the 2D visuals of the 16-bit era.  At the time it was mind-blowing.  Now it’s probably the most dated looking console since the NES because 2D is timeless.  Jagged 3D, less so.  That said, viewed on the tiny phosphorous-bright PSP screen, THPS looks better than it would on a proper telly and the character of the game still shines through.  In 2000, this game looked great and was something of a marvel with its free-roaming stages and interactive scenery.  Well, a tram running you over is as interactive as it gets I guess.

One thing that THPS had was a really iconic soundtrack.  This was the age of the proper soundtrack with games like Wipeout licensing actual musicians.  THPS went with a punk soundtrack (something it’d regrettably move away from when it began whoring itself to various hip-hop and nu-metal artistes) and it was quite something to load up a game and hear Dead Kennedys and Suicidal Tendencies blaring out at you.  Indeed, the soundtrack is something of a time capsule – if anything hearing Goldfinger after all these years reminds me that you couldn’t fucking move for poppy ska bands with chirpy wind sections – and even if it did usher in a horrible trend that reached its nadir with the Burnout games, hearing some of these tunes after all these years makes me smile.

‘you get to the bottom’

After nabbing the goals on the Warehouse level, the game sends you to school.  The school level is oddly featureless but is one of the largest stages in the whole game.  Ramps, tables and bridges punctuate the landscape but it’s not until you skate away from the start that you find one of the gaming wonders of 2000.  A small area with two pools to skate in and a giant video screen showing some skating action and clips from music videos.  It’s a little primitive but at the time this was as next gen as gaming got.

Next up is the mall.  A great level that highlights something that was lost to the series (until it came back in one of the later games), the downhill level.  You start at the top of a mall which is basically a huge ramp.  You’ve still got SKATE letters to find, things to smash, points to get and a hidden tape but once you get to the bottom of the level, that’s it.  End of run.  The increase in speed means that it’s harder to line up your jumps but the increased challenge is welcome.  It’s a great level even now, with loads of detail including water features, giant staircases and an outdoor area.  The score goals are tougher here as there aren’t too many opportunities for big points, at least not until you train your eye to spot them.

I can see my impending death from here!

Beating these first three levels obviously helps your skater cred as next up is a competition in a Chicago skate park.  There’s no collecting to do here.  You just lay down three runs and the best two are entered into the competition scoreboard against the AI skaters.  This is the area that so wowed us in the demo.  Pro tip:  go to the half-pipe at the back, to the left (back and to the left…. back and to the left) and stay there for big points.  Without the distractions of the other levels, these skate competitions represent the purest gaming in THPS and are a good place to express your inner skater dude (without the risk of crippling injury/pretentiousness).

After sufficient time on that hype, it’s time for the *woosh* crackpipe.  That is to say, hello Downtown, Minneapolis.  This is an outdoors level where you aim to attain the usual goals while getting run over by bastard motorists.  It’s probably the first area where you’ll need to go searching for your goals and nabbing those pro scores is tough also but it’s also got some nice touches to it.  The hidden tunnel leading up to the rooftop pool is one of them.

Next up is the bitch of the bunch.  Downhill Jam, Phoenix.  This level is much like the earlier mall run but faster, harder and tougher.  Getting the collectables takes a bit of discipline – the hidden tape is a complete bastard even now – and the score goals take a lot of work also.  It’s a great level though, one of my favourites from the whole series.  Although I’ve got horrible memories of them bringing it back for a later game and adding more collectables.  I might be imagining that though.

‘reverting to type and giving you shit’

After another skate competition, this time a tricky affair in a limited arena in Burnside, Portland, it’s over to the streets of San Francisco complete with trams, cops and skateable landmarks.  I have to admit, the hidden tape had me stumped here and I had to look it up onYouTube.  Never would have found it without that bit of assistance.  Fuck knows how I managed it back in the day.  We were made of sterner stuff back then, clearly.

The final level is another skate competition, this time in Rosswell, New Mexico.  An early example of the humour that would grace the series, this level is set in a mysterious environment, all green and techy, that is both spooky and very skateable.  Big ramps and quarter pipes make it easy to score big here and winning this competition unlocks your chosen skater’s skate reel video.  In my case, I get to see Bob Burnquist doing his thing.  Beating all the goals in the game also unlocks a video of horrible bails and the hidden playable character, Officer Bob.

I don’t know if I’ll go back and complete the game with all the other characters – the only reward for doing so is to unlock Private Carrera.  I remember going to the trouble the first time around but the character (a woman if I remember correctly) wasn’t really worth the effort.  Later games in the series would introduce much better unlockable players such as Spider-Man and some weird devil woman, before oddly reverting to type and giving you shit unlockable characters again but the decline of the series is another article, for another time.

For now, let us remember a great and trailblazing game.  It literally defined a genre and wasn’t bested until it went too far downhill and crashed into a metaphorical bus, opening the way for EA’s brilliant SKATE and it’s less-brilliant sequels.  With ten skaters, nine levels and a dozen or so songs, the thing that strikes any veteran of the series is how efficient this game is, elegant even. The gameplay is centred on skating rather than hunting down too many collectables and is refreshingly free of gimmicks whilst still having a few surprises up its sleeve.  The levels themselves are particularly great with a good mix of open areas, downhill courses (why did they get rid of these, they are brilliant) and competition arenas.  Aside from the Downhill Jam level, I blazed through the game quite quickly and whilst it’s a hell of a lot easier than what would follow (Project 8 was coded in hell by cunts), it’s fair to say that THPS is, surprisingly, as much fun to play today as it was all those years ago.

Revisiting it has been a blast.