From developer No Code comes Observation, a science fiction thriller. It has an interesting concept in that you play as an AI watching the plot unfold through cameras rather than being the focus yourself.

The artificial intelligence you embody is called Sam, short for SAMOS. You are the AI on the space station Observation and you’ve just been rebooted. Dr Emma Fisher is there to greet you but due to the reboot you have to re-establish your link to the station again. Something has obviously gone wrong and other than Emma the crew is missing. You’ll work together to figure out what is happening, why it’s happening and where everyone else is. 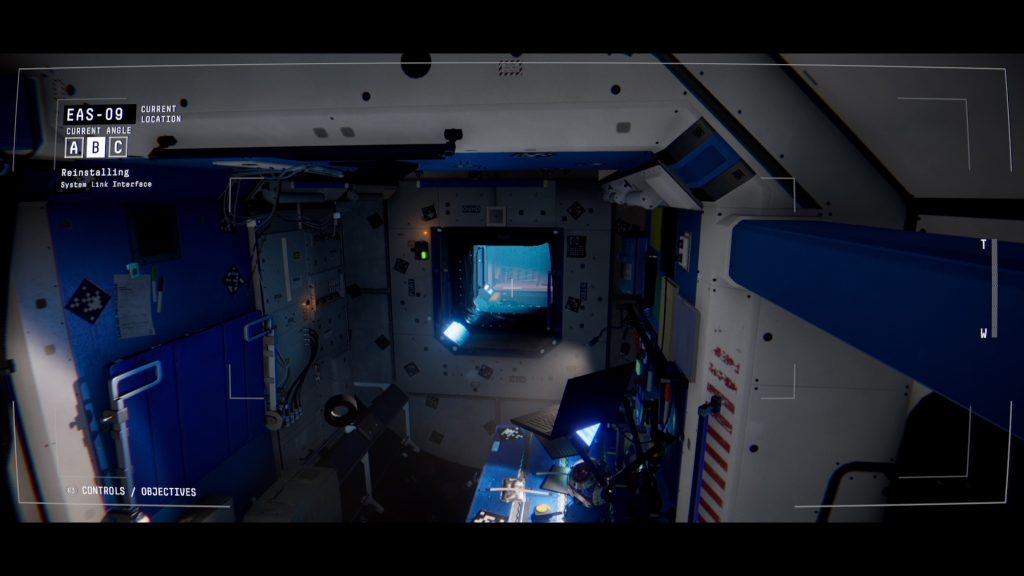 Being an AI you have a limited impact on the world. You can see the environment through the multiple cameras in each section of the station and as you move the camera view over items you can interact with they will highlight. This will generally be electrical devices which Sam can form a link to such as hatches, airlocks and scanning equipment. You can also view documents through the camera and access laptops to get information and backstory on the crew.

The gameplay boils down to Emma giving you an objective and you then going to the correct room’s cameras and finding what you need to interact with. Sometimes it’ll be as simple as clicking around the screen on highlighted buttons to get the information you need, sometimes you’ll need to work a little harder. Laptops may be locked behind a passcode or on the odd occasion you’ll have to get the coordinates from one machine to use on another. Generally though things are pretty straight forward, to the point where I’d hesitate to call them puzzles. 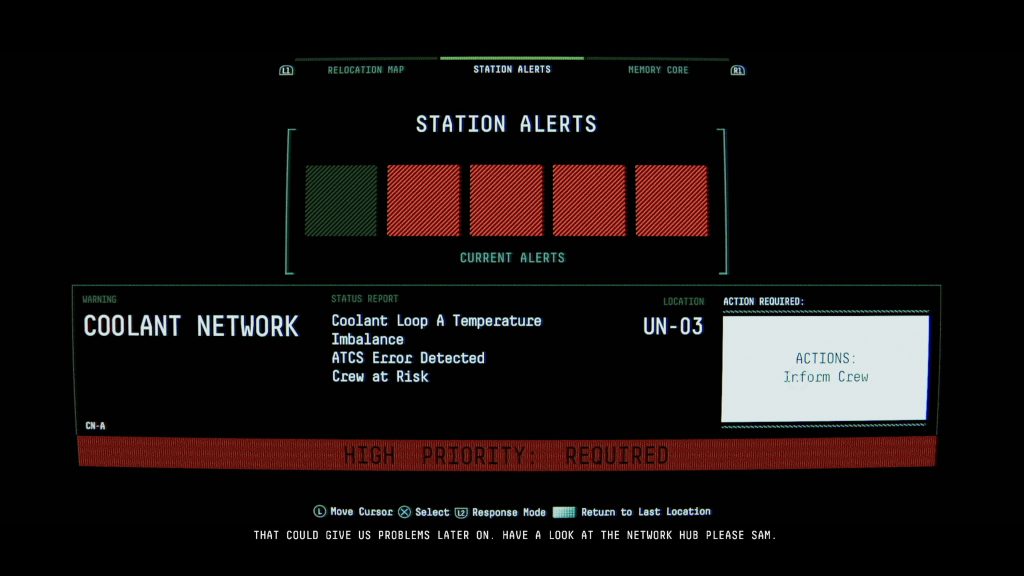 That’s not to say I never got stuck, I did, but that was due to poor instruction or UI rather than a fiendish puzzle. I can think of three separate occasions where I was stumped as to what I was supposed to be doing or where I was supposed to be going or how to get there. There was a point where I needed to get some coordinates to send a message out and the game told me what machine I needed to use and where it was (which is more than it does a lot of the time) but once I got there I had no clue how to operate it or what I was looking to achieve. Similarly there are times when you can take control of a drone and float freely through the station and even space walk and I got lost multiple times due to the restricted field of view and samey environments. The first time I space walked I had to check out some external damage on a specific part of the ship and it took me far too long to find it as the game had disabled my map whereas knowing the layout of the station, as the AI would, would have allowed me to find it pretty quickly.

Things taking a long time is a constant problem actually. If you’re looking around for documents and fully exploring the area then things can slow to a crawl as the camera pans are incredibly slow and the drone moves slowly and rather clumsily too. I get that you’re in zero gravity so that’s how things would be or that cameras can’t pan that fast but it just slows everything down to a snails pace, if not slower. If you ignore the exploration, know exactly where to go and how to execute your objective then I expect things would move at a more reasonable speed but if you want to fully explore each space then you’ll be panning two or three cameras fully left, right, up and down hoping to find something to interact with. 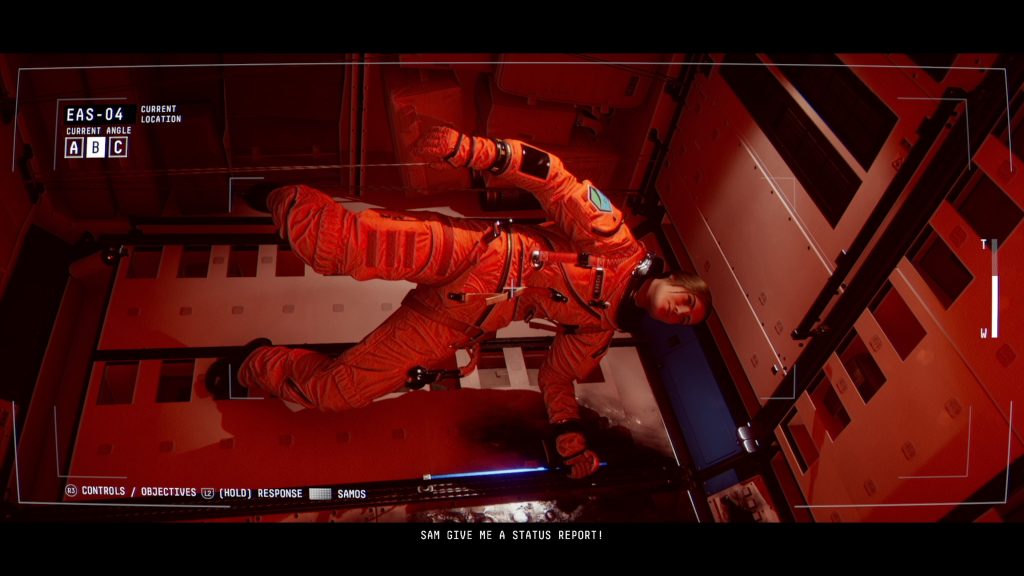 Complete an objective and the story will continue. Emma will move things along and give you a new objective and the process will repeat. If you’ve not made the connection yet then this is basically a walking simulator, but with less walking and more cameras. Despite the promise of being able to control a space station’s AI you are just finding the right object to click on to continue the story with no choices to make.

I also had multiple UI problems with elements remaining on screen when they should have vanished. This took the form of small text prompts that were just annoying and screen filling layouts that blocked story sequences. A quit and restart sorted things out but the autosave was infrequent a lot of the time and I was never quite sure when it had last saved forcing me to sit through story sequences and dialogue to get back to where I was. A lack of chapter select will be a bummer for those that have missed some of the documents or missable trophies (like me). 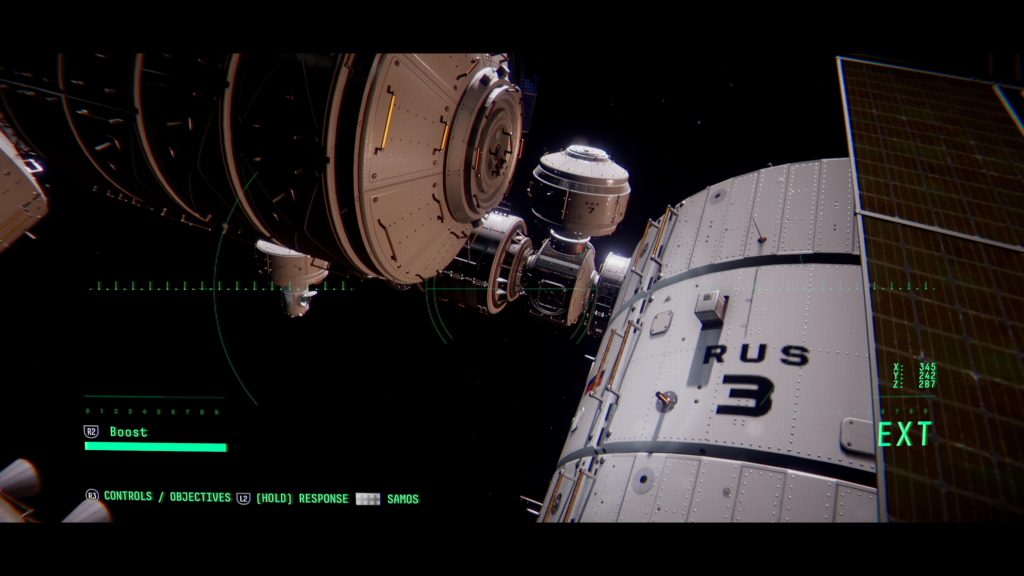 The game does do a good job of hinting at what might have happened with a good use of sound and music and the visuals are very nice with both the station and character models looking suitably detailed. Some of the tension is wasted as you slowly move around or get lost for an unnecessary amount of time but I figured it all out in the end and if you’re into your science fiction stories which go places then you may get some joy out of Observation. I was more frustrated by the experience in the end than drawn in by the story but your mileage may vary.

Observation
6 Overall
Pros
+ A great atmosphere thanks to visuals and audio
+ The story takes some turns
+ Good acting
Cons
- Things move so slowly
- A lack of information can stump the player
- Some UI bugs
Summary
Observation is a science fiction thriller with a solid concept that puts you in control of an AI on a space station. The presentation is top notch and the story goes places but I found the pacing and lack of true interaction to be frustrating.