From developer Playful via publisher PQube (in Europe at least) comes New Super Lucky’s Tale. Originally released as an Xbox One X launch title in November 2017 without the ‘New’ part, NSLT is an expanded version of the Xbox game that came out on Switch in November 2019. We’ve finally got it on PS4 and wonder was it worth the wait?

We’re happy to report, yes, it was for the large part. NSLT has an enhanced graphical layer of polish compared to the original Xbox version and remixed levels. Though not having played it before it came to PS4, we can’t tell you if there have been any significant changes otherwise. 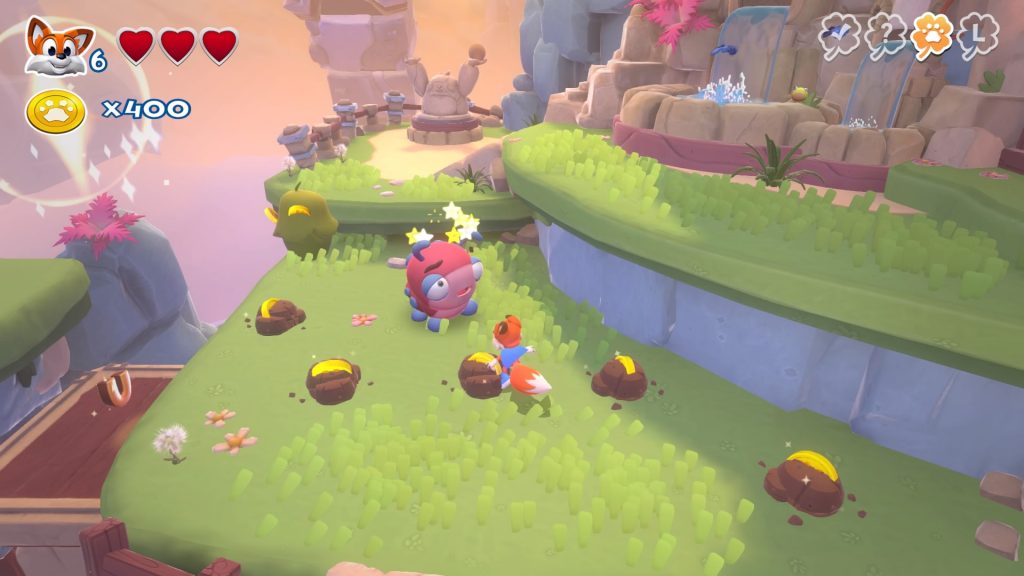 For anyone that played Donkey Kong 64 or either of the Banjo Kazooie games on N64 (or latterly on 360), the structure will be largely familiar to you. A hub area with levels accessible within it. In addition, NSLT throws in extra puzzle levels, all of which add up to your unlocking the portal to the next area upon beating a boss.

The main villain of the piece is Jinx, a cat that’s a bit of a twat, just like cats are in reality. It’s down to you to defeat his lieutenants in turn, the first of which, Mittens is a pest to the denizens of Sky Castle. There soon follows a bunch of levels in that hub, most of which are 3D platform stages. As you progress you’ll encounter forced perspective pseudo-2D levels. More often than not you can play them at your own pace, but occasionally they’re autorunners penned ‘dungeon runs’. 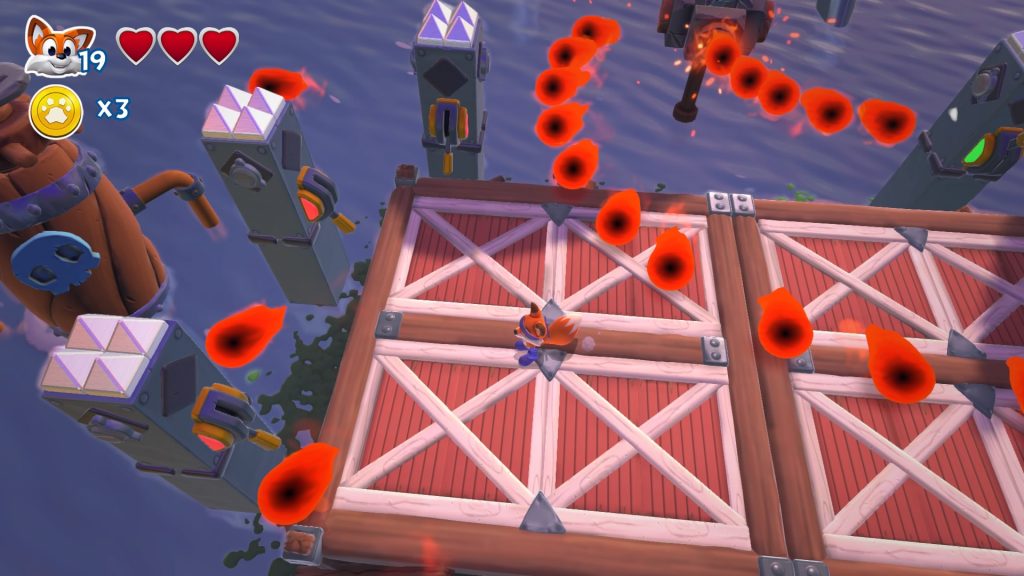 All the levels, barring the one-shot puzzles in ‘foxholes’, have four Tale pages to unlock. One for beating the level, another for reaching 300 coins, a third for spelling out LUCKY by collecting individual letters and finally, a secret extra page usually unlocked by completing a puzzle inside the level. Generally you won’t have a great deal of trouble unlocking most of these on the first pass, though the Lucky letters might evade you.

It’s here that a bugbear of ours comes to the fore. If you go back to a level and fulfil the criteria for a page, say the L of Lucky, you won’t be able to save and quit. Nor will you be able to go to the next checkpoint and quit after it’s saved your progress. This isn’t so bad early on when you’re collecting the extra currency to unlock new costumes in the shop within each hub. But when the levels get ever more complicated and multi-staged, it becomes something of a chore. 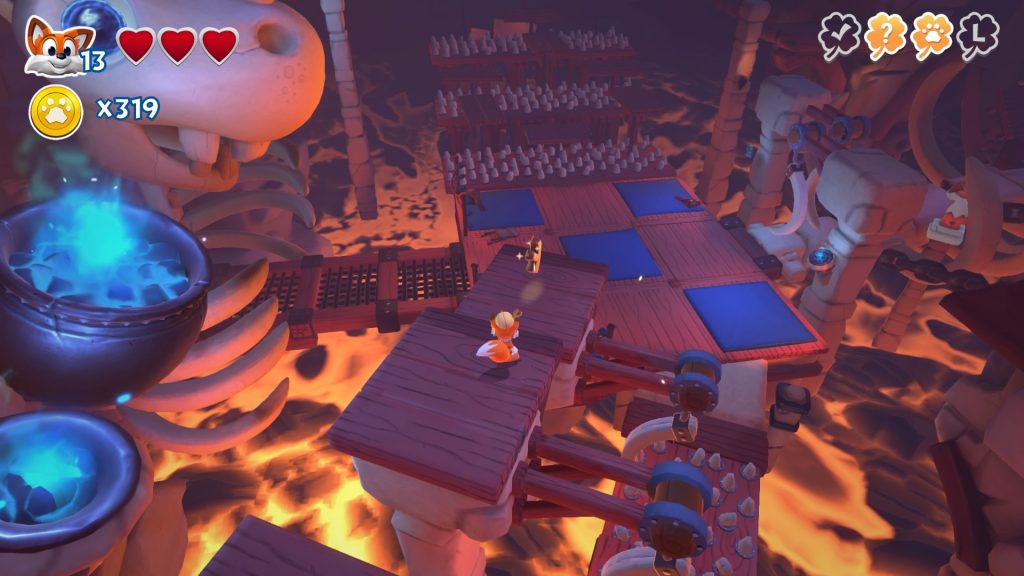 The puzzles we mentioned earlier are either pushing block or tilt puzzles. The former are fairly straightforward for the most part, only really becoming mildly challenging once you get to the fourth hub anyway. To be honest, only those out for a platinum trophy are likely to go for them all anyway.

The six-year-old in residence liked what he played but found some of the collectibles a little beyond his comprehension. No bad thing as it allows for parents (aka us) to help out if their kid is vexed. But for the most part, all but the very youngest kids will be fine with this due to the fairly relaxed page limits to unlock the next hub.

As we alluded to with the foxholes, there’s fox themed puns a plenty. Our kid thought Super Lucky’s Tale was the absolute height of sophisticated comedy what with the double phonetic meaning. We just groaned for the most part. 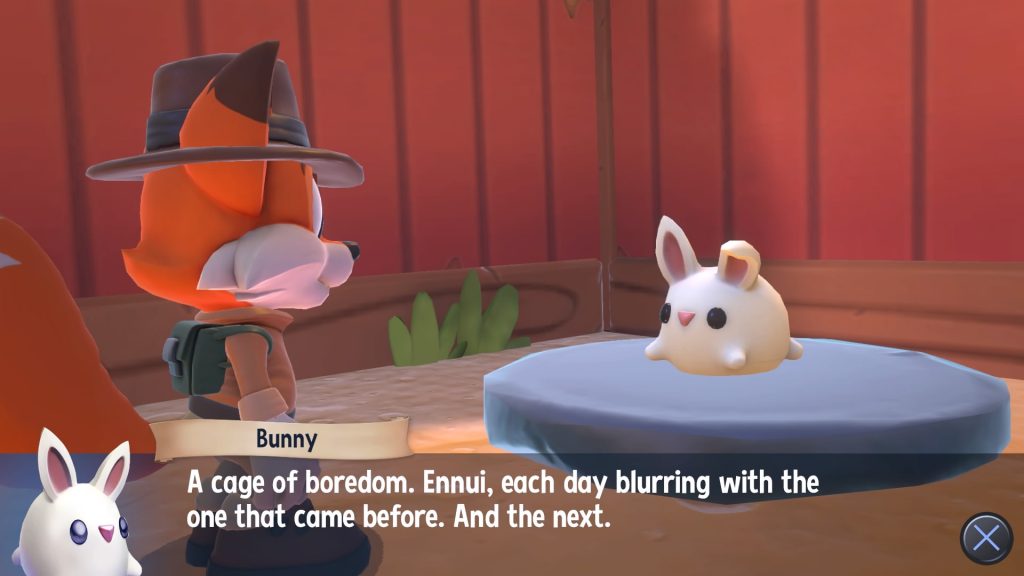 At the very outset you get a trophy from watching the introductory cutscene.  It’s the first of many trophies that you’ll be showered with at the outset before they slow to a relative trickle. Each hub has an associated trophy for getting all the pages within, they’re a fair challenge especially with the Lucky letters within each stage.

The plot is a fairly well worn template, but it’s fun enough, especially for younger players. More foxy puns at least. Notably all the cutscenes are done in-engine, with subtitled text from the Simlish-sounding speech, such as it is.

Any shortcomings are overcome by the fact that this is a very polished experience and that Playful have clearly refined New Super Lucky’s Tale to be a great example of the 3D platformer that harks back to the genre’s heyday.

New Super Lucky's Tale
8 Overall
Pros
+ Very polished presentation and fun gameplay
+ Suitable for both kids and seasoned players
+ A nice hot mug of tea of a game. You know what you're getting and that's comforting
+ Existential angst bunny

Cons
- Plot is secondary to the the platforming
- Fox puns. Oh my god the fox puns
- Collectibles can be a chore due to not being able to save and quit
- That intro trophy is a cheap way to get trophy addicts locked in
Summary
New Super Lucky's Tale is a great 3D platformer suitable for both young and old alike. The plot is daft but you're here for the gameplay. Don't kid yourself otherwise. Collectibles are a mild chore sometimes, but not disastrously so.