I’ve grown to like the NASCAR Heat series. Whilst I tend to spend most of my gaming around circuits, the ovals of North America provide something different and the racing has a compact competitiveness I just don’t tend to find much outside of Touring Cars. 704 Games are back with NASCAR Heat 5, the 2020 edition of the long-running franchise. Whilst it still feels compelling to drive, the sense of progress has slowed. 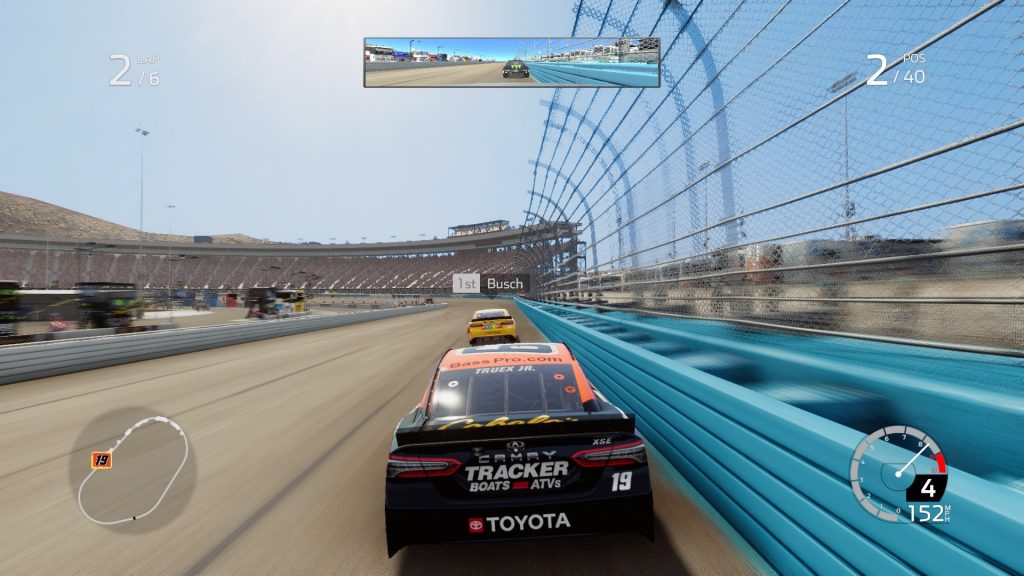 There’s not much new to NASCAR Heat 5. Test Sessions arrive as a way to shakedown new setups or just get some consequence free practice times on the board. It’s a welcome addition with practices being available across the other modes. Having it as a standalone option gives players a chance to adapt to assists, figure out lines and learn the game’s dozens of tracks.

As a driving experience, it remains fairly accessible. There’s plenty to tinker with and customise. AI behaviour can be fiddled with, as well as overall difficulty. By default, it tries to adapt to your ability via the Speed rating that you’re given after every race. Getting the races under your belt for the system to find your level can take a while. Alternatively, you can pick a set difficulty for a more immediate challenge.

By default, the racing has a simple feel. A fair few assists are on by default which do allow for you to focus on battling the pack. Drafting feels good and the force feedback lets you know when you’re right in the tow. You can get nice side drafts and draft partners can form up to bring you closer to the action. It hasn’t changed much since last year but it still feels good. 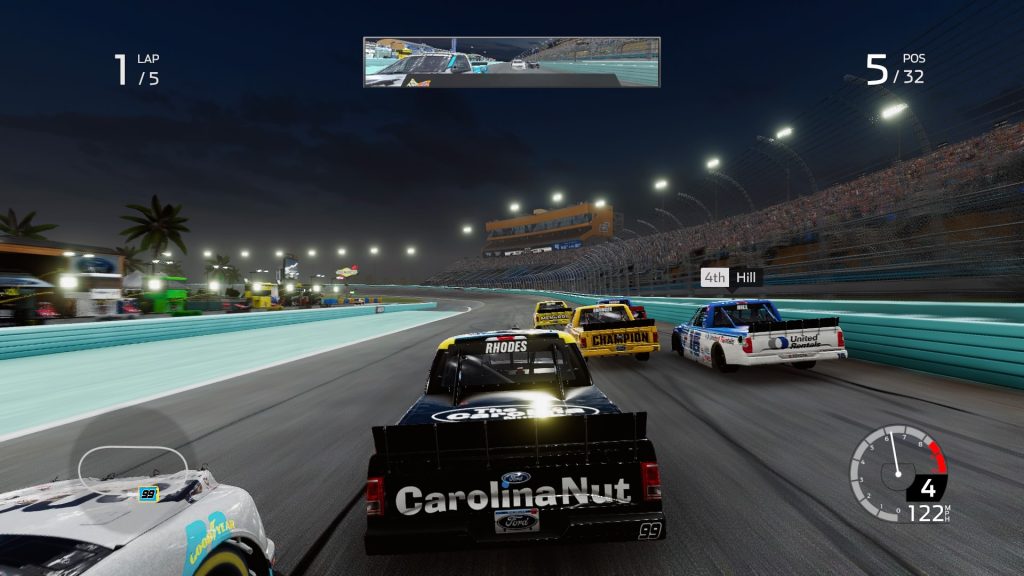 The other modes seem largely untouched. The challenges return from the previous game to place into specific scenarios. They give you more of a focused event to chase but the presentation remains bare and the rewards lead to other scenarios and little else. If I’m sounding a little down on this it’s because this feels like a series holding station. The career mode is where I spend most of my time and that hasn’t seen much beyond a cosmetic change. You still try to gain favour with teams from hotseat drives and try to win friends and influence people on the grid. It’s still compelling but I wish there was more progress made.

Complementing and criticising drivers remains a fun diversion between races and, for the most part, you’re quickly thrown from race to race. There’s a swiftness to these games I’ve always liked. It’s a shame there appears to be less video of drivers but I suspect the current climate might have had a hand in that. NASCAR briefly got underway in March before having to postpone for two months. It would’ve certainly limited access to drivers for those daft video interludes. Still, the career mode remains enjoyable. Hotseats now require you to call for any available seat rather than it being handed to you. It’s a minor change that at least makes you feel more involved in the process. Climbing the ranks and meeting objectives is fun. As is watching your reputation increase as you gain new fans. 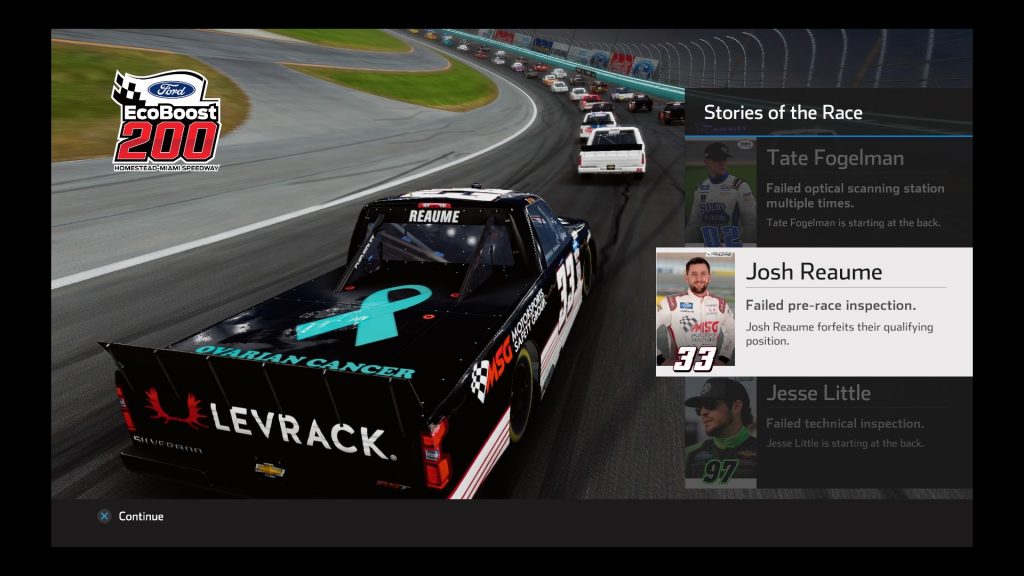 Starting out in the dirt tracks is great and provides a much different driving style to the stuff you do on the paved tracks. Digging into the mud and sliding into a corner has a solid, tactile feel. It’s a shame it gives way to that stuff so quickly but there’s three officially sanctioned NASCAR series’ to get into. They differ in speed and handling but it’s not a drastic change. You can start wherever so, if you want to jump straight to Cup Series, you can.

All the other modes return as they were. There’s splitscreen and online multiplayer which performs well. The lobbies seem decently packed at launch. Championships return so if you don’t want to commit to a long career, you can pick a driver and go after a fully-fledged or curtailed season. You can even customise the calendar further. The full compliment of tracks taken from 2020’s provisional schedule are here. The cars are all brilliantly modelled and the drivers have an individuality to them. It’s exacerbated in career mode by the friend or foe system that means the former will protect and draft for you whilst the latter will look for contact. It gives racing in this game a dynamic that doesn’t explicitly get touched upon in other racers.

I’ve always liked how varied the NASCAR circus looks. No two ovals feel the same with speedways giving way to short tracks, circuits and super speedways. There’s a character to each track and I’ve always admired how NASCAR Heat renders their venues. There’s a vibrant colour to them that makes a change from the dour circuits I tend to see in Europe. There’s a camp ground feel to most of them and the change from day to night allows for some lovely skies. 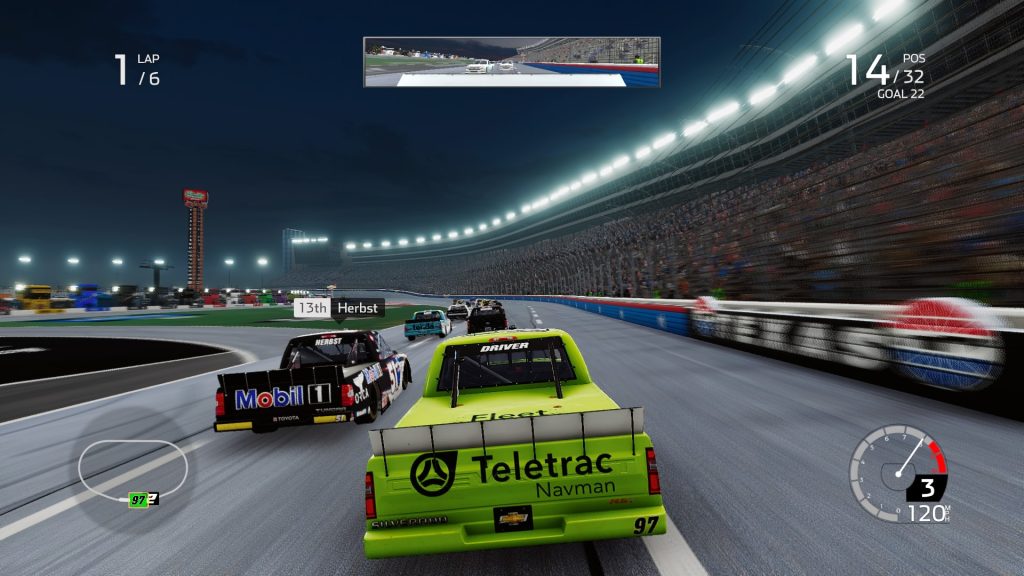 Technically, the same problems with the engine persist. The framerate is fine but it’s not consistent. You still see the occasional hitches and there’s almost always a pause at the finish. It’s not going to cost you but it’s noticeable and it has been present for years. For the most part, it looks relatively polished but you wouldn’t be able to separate it from last year’s game. Same could be said for sound which retains the usual booming sound of the engines and the reassuring chatter of your spotter. The soundtrack is settled firmly into country and some southern flavoured Americana.

It’s always a worry with annualised franchises that progress can slow to a crawl. The new testing sessions are necessary but so much of this is lifted directly from the previous game. It’s starting to stagnate but that could be down to the consoles being at the end of their lifespan or current events. It still remains a playable, customisable package that should keep you entertained for hours. I just wish there was more to shout about.

NASCAR Heat 5
7 Overall
Pros
+ Aggressive, compelling racing.
+ Plenty of options to customise the experience.
+ Test sessions give you a standalone option for practising.
+ Career mode remains compelling.
Cons
- The framerate remains inconsistent at times.
- There appears to be very little new to get into.
- The adaptive difficulty can take a while to find a comfortable level.
Summary
NASCAR Heat 5's racing remains compelling and customisable. The visuals aren't perfect but they've retained a wonderful style and character. It's a shame the new additions like testing sessions feel so slight and career mode has stayed largely the same. Some of the technical hitches become more noticeable as time goes on but, if you're after some new NASCAR, this will suffice.