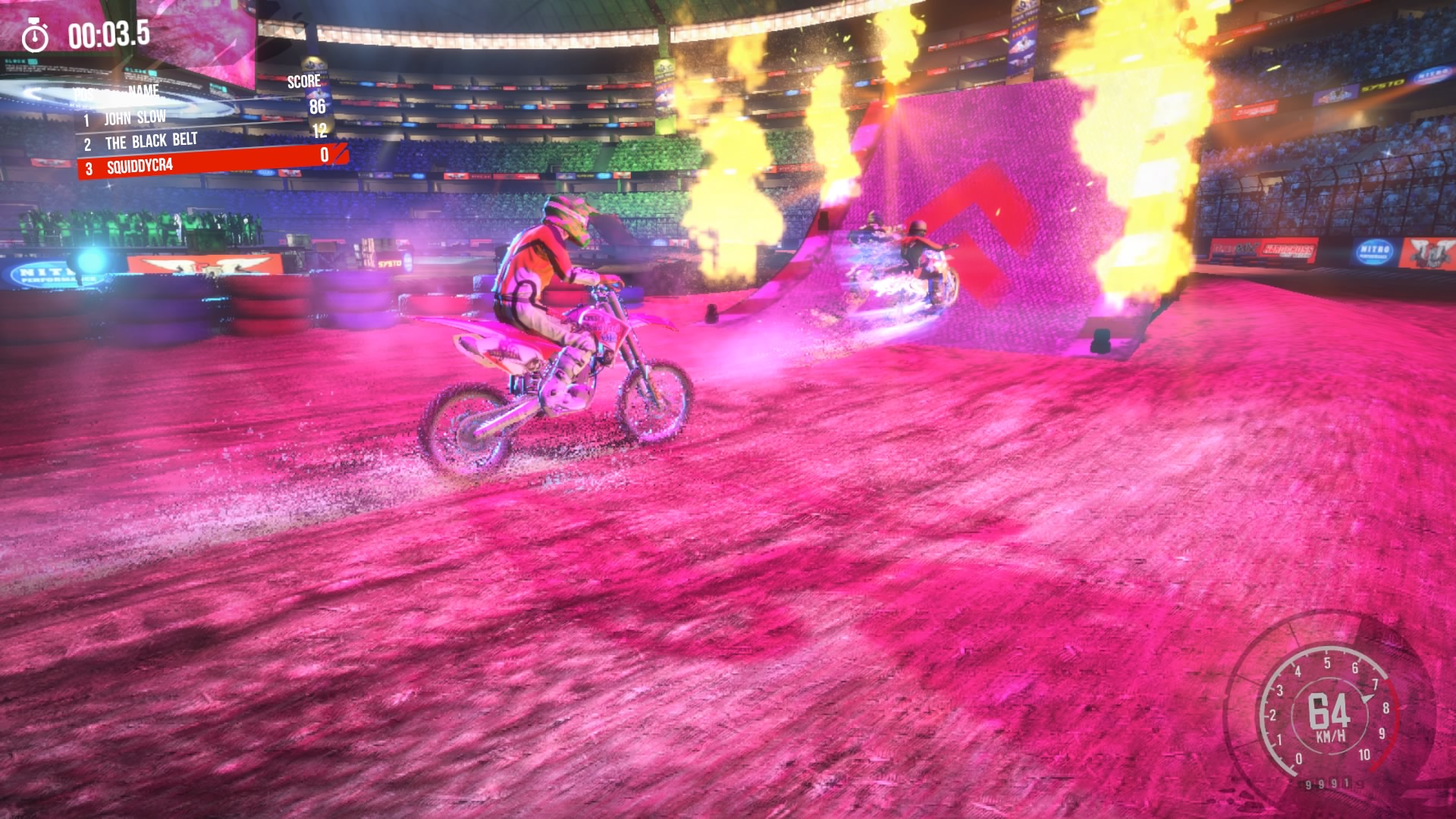 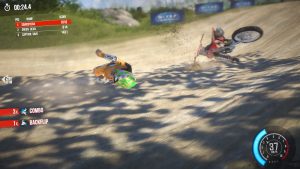 I loved Trials… to a point.  Everything was great, I love the look, the controls and the levels.  And then the game outgrew my set of skills.  I know people who obsessed over every bounce, every landing and got close to mastering it but I play far too many games to devote that much skill and patience to mastering too many of them and somewhere just after the ‘medium’ levels, my attention wandered (taking my bruised ego with it).  I guess what I wanted was that core gameplay but with more fun and a bit less of the pixel-perfect physics stuff.

Luckily the gods I worship (Jimi Hendrix and Clive Sinclair) must have been listening because MX Nitro is exactly what I want from this game.  What you get is the Trials viewpoint and rotational controls married to a tricking system.  The levels aren’t about figuring out how to make a bike climb up a mountain but more about hitting big-assed ramps and pulling freestyle tricks in order to boost your nitro tank and help you win races.  It’s Trials but fun.  And not in the ‘oh look, we’ve added unicorns’ gimmicky kind of way.

For a digital only indie title, I was struck by the visuals immediately.  It has that same Trials perspective but it is also nicely presented without ever obscuring the gameplay.  The game’s main mode (career) offers a whole heap of locations, each one hosting four or five individual events.  As explained before, tricks fill your nitro boost and success is usually about figuring out the right time to boost.  You may want to save it for the flat sections whereas other people choose to use it to get as much distance off of jumps as possible (which in turn gives you more time for a few extra flips or tricks). 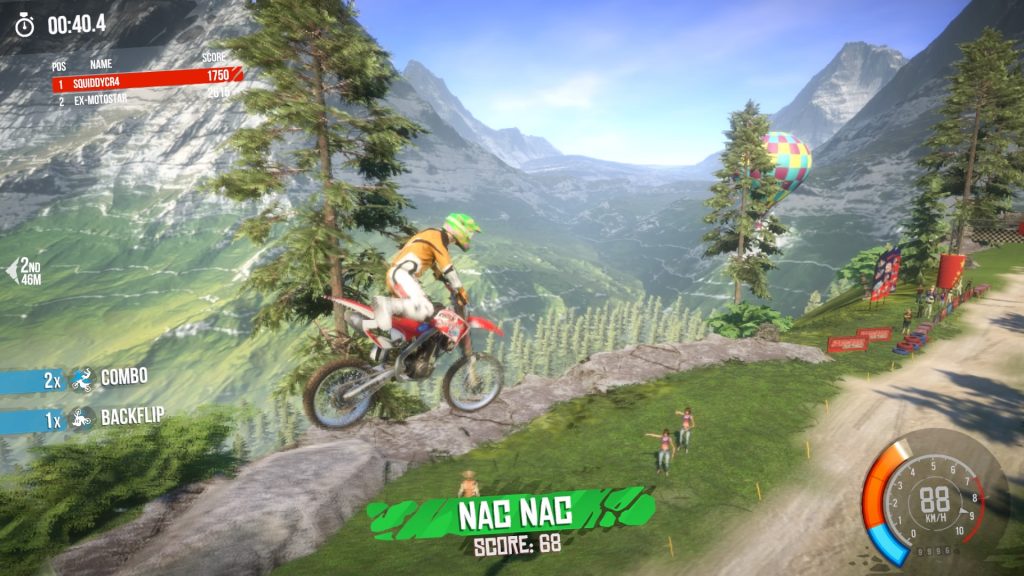 Most levels are races although there are score based levels too where only tricking counts.  Either way, the key to success is keeping those tricks coming and then employing that boost.   Oh, and sticking those landings too.  MX Nitro is pretty fair about that, but you’ll still find yourself landing on your face if you aren’t careful.

The tracks are short but well designed.  Races are usually over in less than a minute which is fine as that’s how you want it.  You don’t want long sequences of areas where you’ll keep crashing.  Luckily, this is far-removed from Trials in that respect. 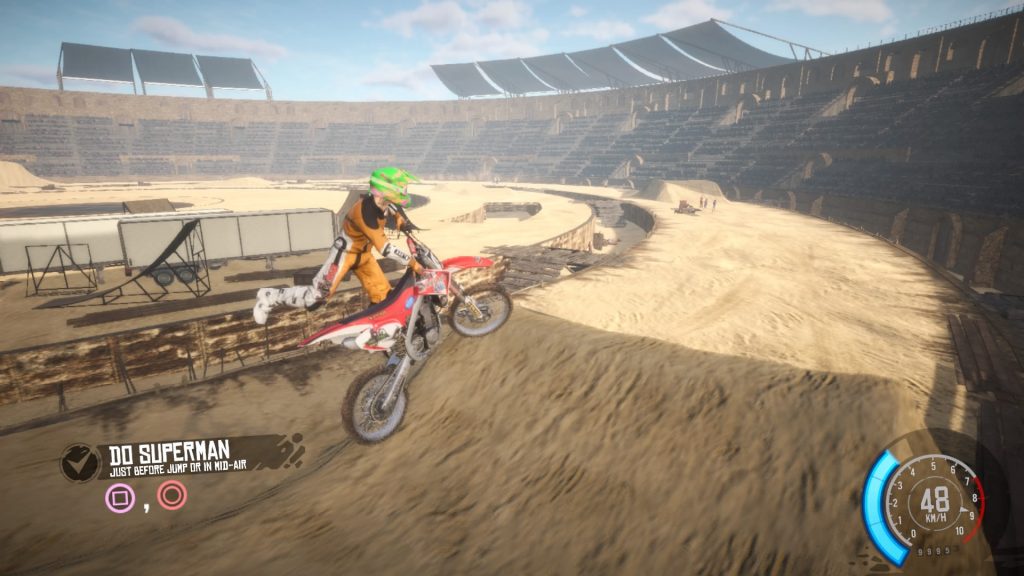 Of course, the hardcore Trials fans out there will no doubt criticise this for being a cheap, dumbed-down clone but MX Nitro has enough gameplay and polish to stand on its on two… er… wheels.  It’s still addictive and fiendishly tricky but it is also satisfying and arcadey without ever going too hardcore or nerdy about it.

There is also an upgrading mechanic to the game where bike upgrades are unlocked as you go along (you also have to buy them but the in-game currency is earned pretty generously) and you can also unlock new bikes that are designed for one particular aspect of the game (such as tricking, racing or earning nitro boosts).  It is a little tacked-on but it adds something and you can also spend your earnings on customisation items that you’ll never notice on your rider. 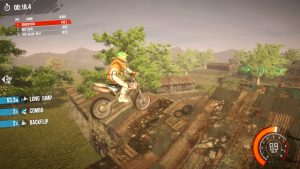 While I’ve really enjoyed the game, it’s a shame that each stage blocks off the rest of the game.  You’ll often find yourself stuck on a particularly tough level or boss wishing it’d just fuck off a bit so that you can get on with the rest of the game and the game was so easy to manage at the start that by the end you might wonder why it got so taxing but it is never dull and with online modes available too, there’s quite a lot of fun to be had from MX Nitro.

But then I’m an absolute mark for extreme sports type games and anything that lets me pull a Superman seat grab while backflipping will always appear to the recessive redneck gene that my parents have left me with.  That’ll explain the whole PlayStation Country thing actually.  Either way MX Nitro is good.

MX Nitro
8 Overall
Pros
+ Very easy to pick up + Great controls + Nice arcadey levels + Good visuals
Cons
- Some stages are quite difficult and stop you advancing until they are beaten - Trials fans won't get what they are looking for from this
Summary
Trials style gameplay but with the hardcore aspects taken out and replaced with fun stunt-based gameplay. MX Nitro is polished and fun and offers great arcade thrills for those of us who like our motorbike action dumbed down a little.