Before EA turned into franchising behemoths, they released a fondly remembered Megadrive game, Mutant League Football.  Mutant Football League is a clear homage to that game from days of yore, updated this year with the Dynasty Edition suffix and is nothing to do with EA, we might add.

At the outset, Mutant Football League makes it clear they don’t have an NFL licence. But when teams are named like the Blitzburgh Steelheads or the Grim Bay Attackers, it’s not hard to see they’re analogous to the Pittsburgh Steelers and the Green Bay Packers. That along with the in-game logos being for the MFL and television coverage by EvilSN add to the knowing winks. 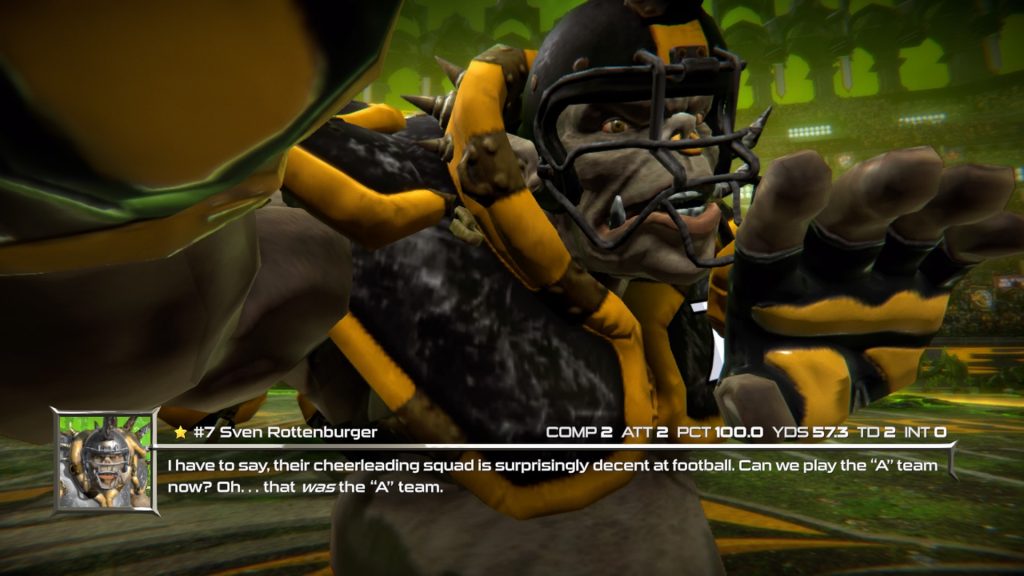 The similarities don’t end there. The respective rosters of each team mirror their real life counterparts down to jokey horror themed adaptations of player names,  numbers, respective positions and real-world traits. This slavish adherence to bad punnery adds to the feeling you’re playing a reskinned Madden game at times.

MFL originally came out last year, continuing the trend of new DLC content being bundled in with a game re-release for what is penned Mutant Football League: Dynasty Edition. More on the titular dynasty later. 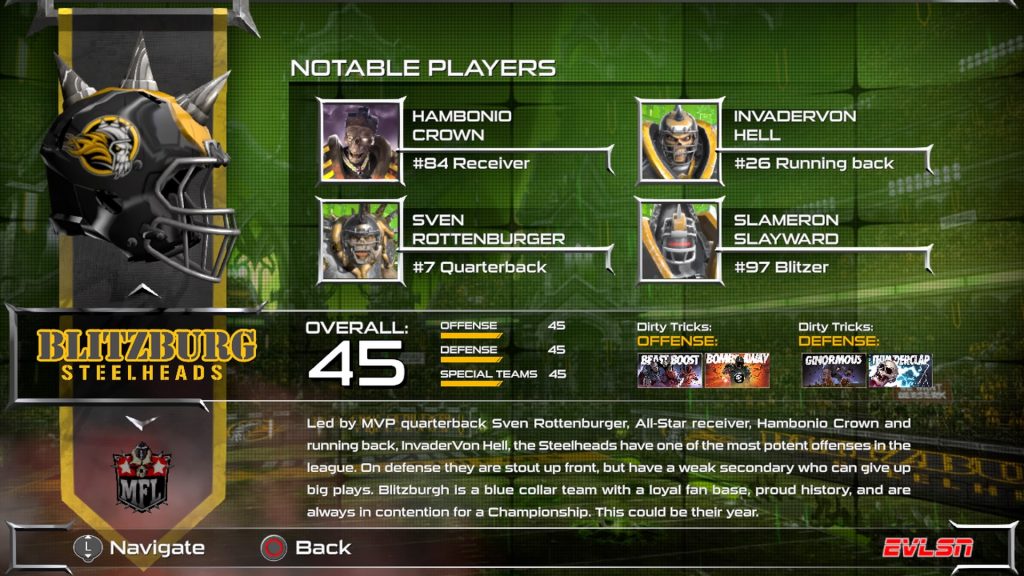 If you’ve ever played a Madden game, you’ll be immediately familiar with the gameplay as the controls and play selection are effectively the same as recent entries in EA’s long running annual series. This lacks the Ultimate Team mode you’ll probably have played, but game modes reflect those you’d expect to see. They being season play, single match, online play & practice mode plus dynasty mode.

There is a tutorial available at the outset, though it’s best avoided unless you’ve never played an NFL game in your life. It introduces a couple of mechanics unique to MFL but to be honest you’ll be fine to carry on and get stuck in to season play. 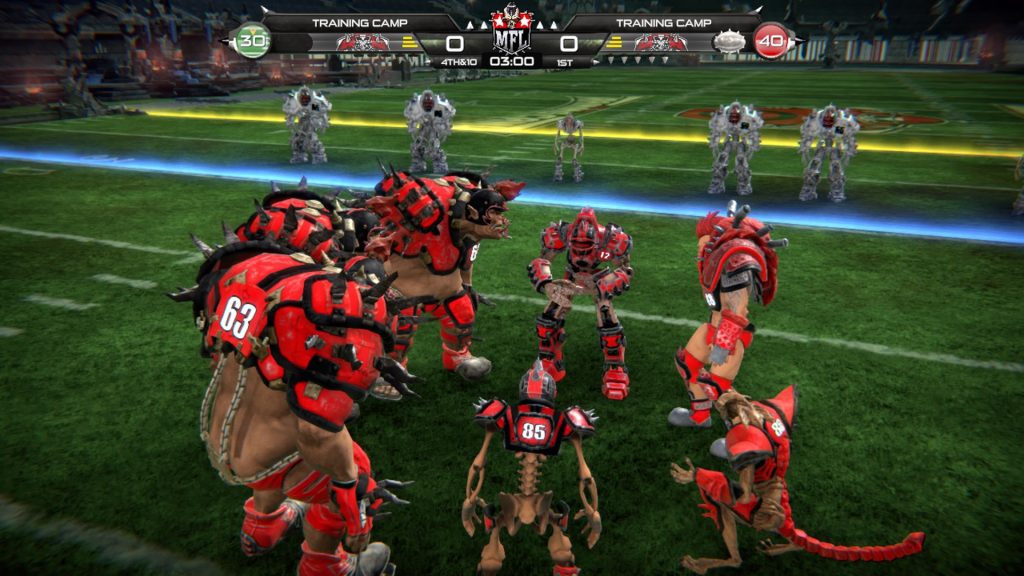 Each team has its own unique set of dirty tricks available. ‘Bribe Ref’ or ‘Giant Player mode’ being two examples. One particularly egregious example you’ll face is ‘Rewind’ that totally erases the previous play, giving your opponent a do-over. When you find yourself on the ropes in a game, having a critical stop wiped out by a dirty trick erodes what little goodwill you may have accumulated.

In addition, each field you’ll  play on has its own unique set of obstacles. Be they chasms at the side that result in instant death if you stray out of bounds or landmines, but you’ll  generally manage to avoid them unless you’re knocked into them.

You can also kill or be killed on the field of play, it’s all very silly but befits the mood of the game. 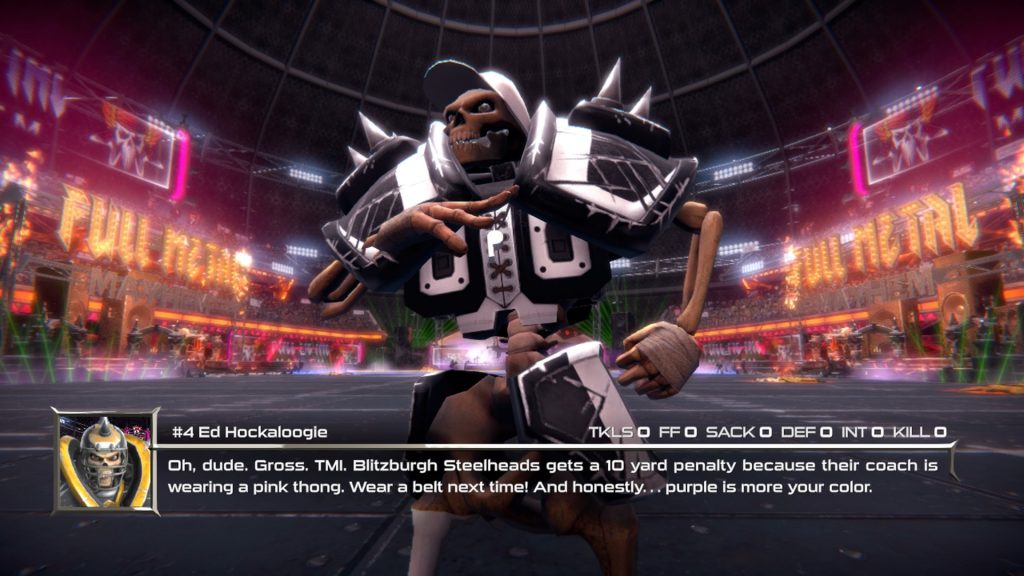 Season play is the meat on the bones here. You’ll play a regular season schedule followed up by playoffs, assuming you qualify. You’ll find games go one of two ways, a low scoring defensive slugfest where one score will typically decide matters. Or you’ll score and score with no answer from your opponent due to a massive mismatch. One game we won 49-0 due to scoring on every possession as well as the opposing quarterback throwing seven interceptions.

These interceptions are a bit of a problem too. Another match we came up against an average team with a superstar cornerback. These guys operate downfield and deflect passes, or in the case of this player have hands like superglue and an uncanny ability to be exactly wherever we decided to throw the ball. It made our air game irrelevant to the extent that when we threw the ball any distance downfield he caught it for an interception. 5 times in one match in fact. 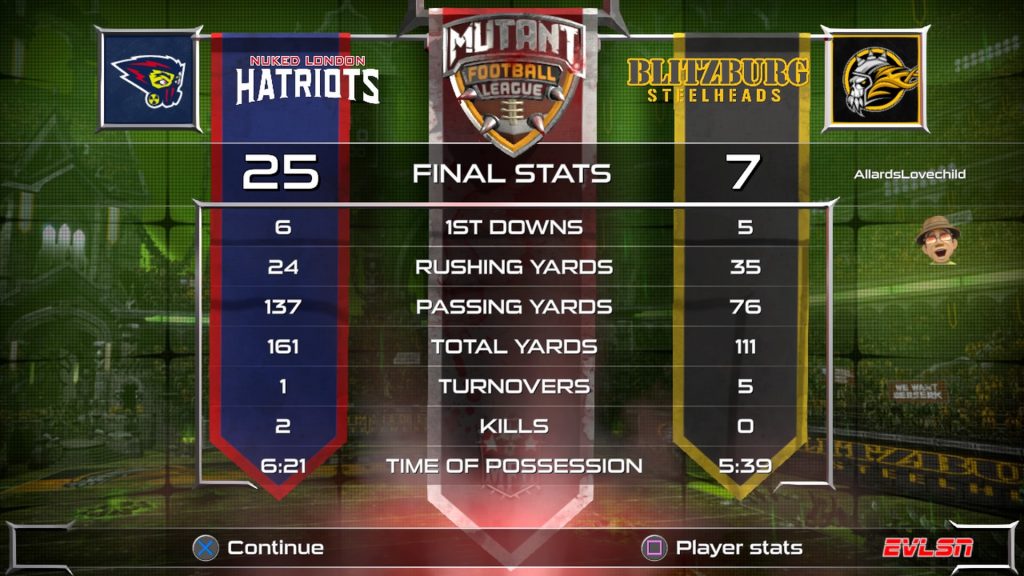 It made for a very frustrating gameplay experience with not much fun to be had. We’re not proud but our controller almost flew through the air, the only thing stopping us being the fact that we didn’t have a spare.  Despite these balance issues, we’ll get back to season play soon as we’ve given Madden a miss this year.

Dynasty Mode then. Oh dear. Talk about a missed opportunity. Rather than let you draft a team with an average rating, the team you pick will have its stats rounded down to a scrub rating of 45 across the board. You can immediately upgrade your players to become a little bit more competitive, but the game limiting you to a finite amount of upgrades per game week makes for horribly slow progress. The only way to proceed quickly is to drop players for expensive free agents which kinda defeats the object of having the ability to upgrade your players. You’ll struggle to be competitive from the get-go, getting shellacked week in, week out in the early stages. There’s no fun to be had in being beaten repeatedly here, often without getting on the scoreboard. It’s the game equivalent of bringing a knife to a machine gun fight. Being hopelessly outmatched isn’t normally fatal, but in this case, it is. Your players will have low ratings and get killed and injured stupidly easily, leaving your base players effectively useless until they get upgraded. 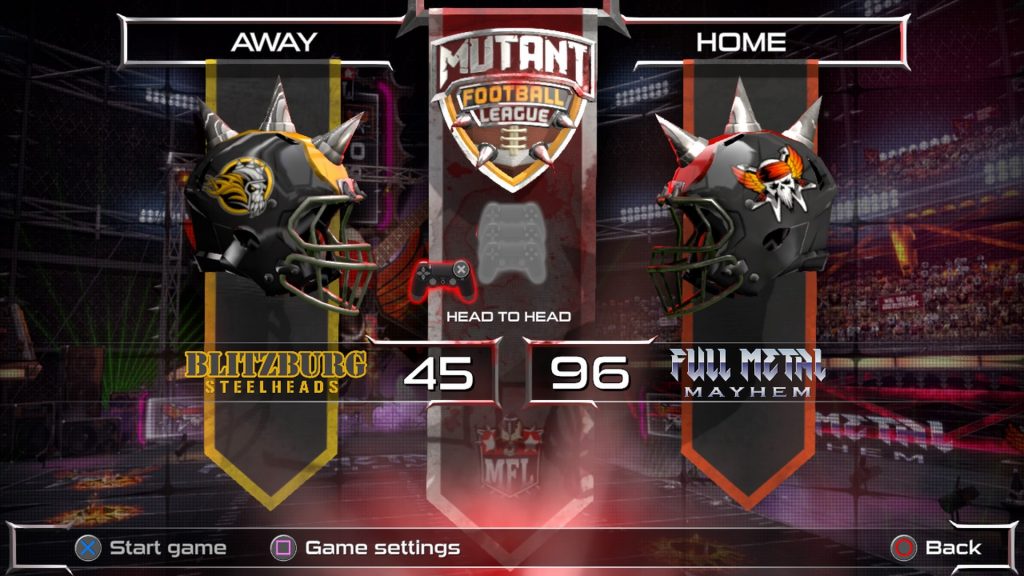 We get the idea is supposed to be your balancing free agents alongside your long term prospects, but when it’s this much hard work and ballache, where’s the fun? Games are supposed to be escapist. If we really wanted to grind ourselves into the ground, we’d take up marathon running or try out for a real American football team.

A better approach would be to randomise your team in the same manner as the base team you get at the outset on Madden/FIFA Ultimate Team. Mostly scrubs but with a few players that help you through. The drop down to 45 and over-reliance on free agency plus the limit on upgrades make this harder than it really should be.  The base game is just fine. Unfortunately  Mutant Football League: Dynasty Edition falls down where it matters most, in the titular Dynasty Mode. As it is, we find it hard to recommend on that feature alone.

Cons
- Games are often onesided in the extreme
- Dynasty mode is badly implemented from the outset
- Some dirty tricks are just too cheap, game breaking in fact
- Superhuman opponents ruin game balance
- Feels a bit too much like a reskinned Madden at times

Summary
The main game Mutant Football League: Dynasty Edition is just fine, but Dynasty mode is a fumbled snap returned for a touchdown.