For a PS+ freebie, 2015’s Tower of Guns was a reasonably good game.  It was a rogue-like FPS that had you playing as a lone soldier who had to make his way up the titular tower while facing off against mechanised gun turrets looking to blast you into smithereens.  It was fun and I was happy to complete it on PS4 and PS3 but it was let down by feeling dated with its average graphics and floaty physics.  I do tend to remember it kindly though.

Mothergunship is Terrible Posture Games’ spiritual follow up and it once again pits you against room after room of guns and robotic security measures and sticks to the FPS/rogue-like mechanics.  However, this time you can tell that the devs have a bit more confidence and are having a lot more fun.  This is evident from the tutorials where you are given instructions from The Colonel, a hilariously mad character who brings a fair amount of comedy to the game, and Chief Gungineer Wilkinson who is a tad calmer but still adds a little character to the game, which is something that most rogue-likes tend to miss out on due to their randomly-generated natures. 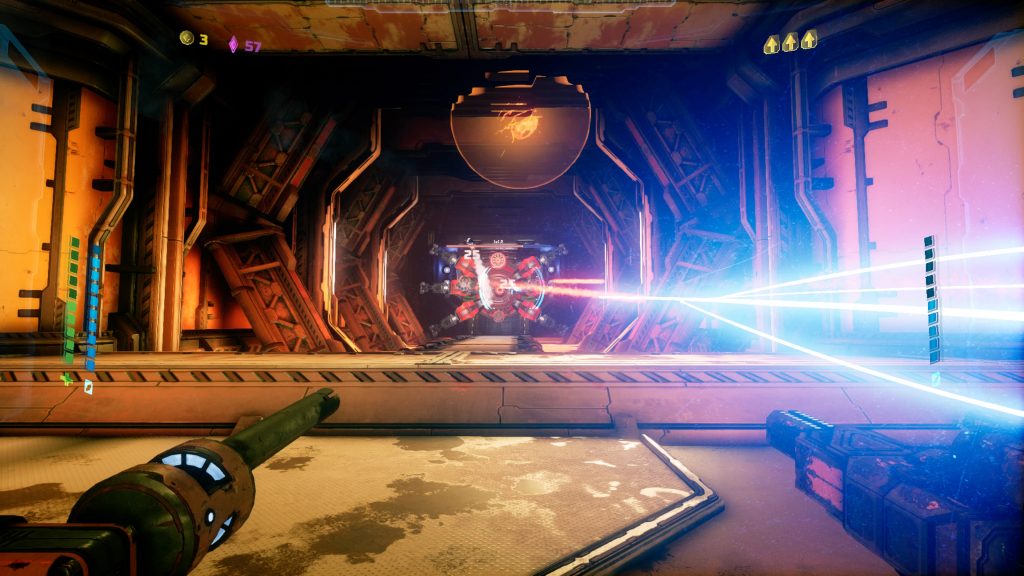 That said, Mothergunship continues in the same vein as Tower of Guns by feeding you rooms in a random order.  It’ll take a while before you start seeing the same rooms again and you are encouraged to look for secrets in them which was very much the case in the previous game.  Despite the randomness of it all, the game feels pretty coherent as you blast your way through room after room trying to find the core of the ship that you are currently in so that you can press the self-destruct button in its core.

What makes the game really stand out is the weapon customisation.  As you destroy enemies, you’ll collect money and this is used to purchase weapon parts that come in three types.  Barrels are your basic weapon types and these cover everything from shotguns, rifles, lasers, buzzsaws and a whole lot more.  Caps are your modifiers and these affect damage, fire-rates and so on.  All these parts are held together by the third type of part:  connectors.  These connectors add sockets where the barrels and caps  go and you can use these to put together some truly monstrous guns.  Before long you can have upwards of ten barrels on some sort of weaponised monstrosity.  The main concern is that a gun with too many barrels will run out of energy almost immediately, meaning you’ll be reloading more than you’ll be firing. 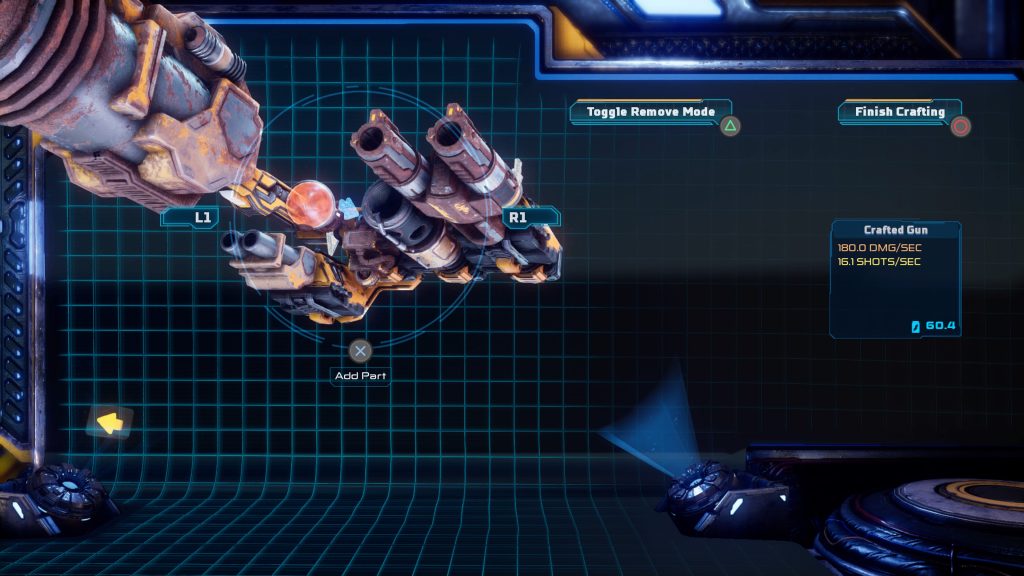 The whole weapon crafting system is excellent.  It’s initially a tad confusing but once you get you used to it, it all makes sense.  What’s great is that many of the rooms you’ll go in will have shops attached and this is where you buy new parts and construct your guns so while it does limit the flow of things a tad, it’s really enjoyable to customise your gun.  Well, guns.  You have one in each hand.  The combinations you can create are fantastic and there’s something kind of ridiculous about blasting away with a shotgun with bouncing bullets that also has a rocket launcher sticking out of the top and a laser coming out of the side.

You’ll need these guns because the game does offer a stiff challenge.  You’ll often run into rooms full of guns, robotic enemies and environmental traps all giving you fits when you’re still trying to figure out which corner you need to get to to stop you being shot for five seconds.  However, when you get into the flow of the game, and you have the guns to put the odds of survival in your favour, it all starts to feel pretty damn good. 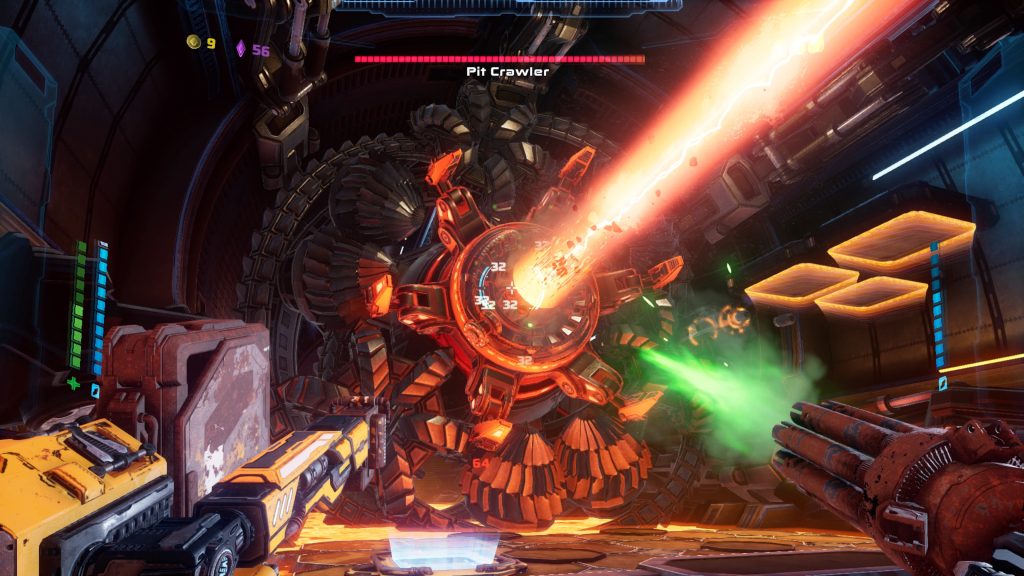 Thankfully, as you complete missions you’ll level up permanently.  This allows you to put points into your armour, letting you pick stats to increase such as health, weapon energy, secret detection and a fair few more options.  You can also reassign these as you feel is appropriate.  We love a bit of permanent upgrading in our rogue-ish games so we were particularly happy with this.  You also get to keep any weapon parts that you collect along the way which means you can start missions with your choice of loadout.

The game also benefits from a much slicker look than Tower of Guns.  Where that game had an overtly brown look to it, this game is all neon-blues and laser reds.  It looks nice and sharp and moves around at a fair old pace too.  The enemy design is a little lacking though with fairly standard attack drones and more of those turrets and the whole mechanised security thing has been done to death but the overall look is pretty attractive.  The game also has fairly bombastic sound that keeps things exciting and the voice acting of the supporting characters keeps things fun too (although you’ll be glad of the skip option after a while).

So overall this is a good improvement over the previous game and one that improves on every aspect of it.  A game where you feel both vulnerable and empowered at the same time and one where the action keeps coming.  If you had humanoid enemies with actual AI, this would really improve the game.  Instead, this feels a little dated in that respect with the enemies feeling all a bit Serious Sam.  But we’re not complaining too hard because we get to run around with really stupid guns.

Mothergunship
8 Overall
Pros
+ Gun customisation is excellent
+ Lots of action
+ Fun dialogue
+ Good rogue-lite mechanics
Cons
- Enemy design is a bit generic
- Randomly generated levels can lack character
- Uninteresting AI
Summary
Mothergunship has lots of action, a good sense of humour and the best gun customisation we've ever seen. The uninspired enemy design lets it down a tad but there's still a lot of fun to be had from this roguish FPS.