I’ve played quite a few Souls clones in the past few years and I generally enjoy them. I played through Code Vein relatively recently and ended up not liking it very much, whilst The Surge 2 I find to be fantastic. Mortal Shell is an indie take on the formula. From the pictures you might think it sticks to that formula very closely but it does bring quite a few ideas of its own to the table. 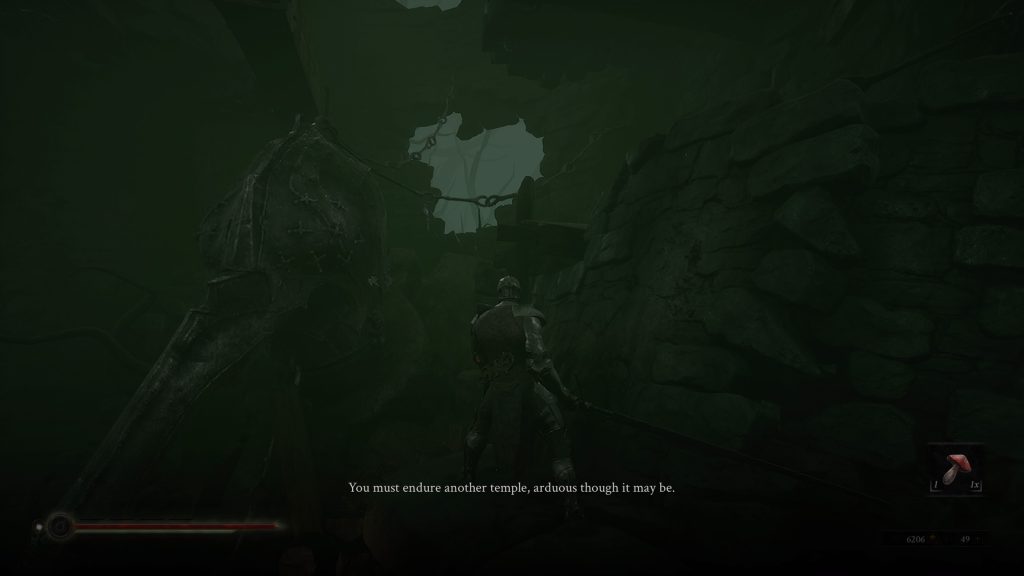 You start the game as a naked, pale skinned creature called the Foundling. You are very weak but have a unique ability to inhabit the corpses of fallen warriors. These Mortal Shells (wink) are your classes but you have to find them first. Shortly into your journey you find a shackled giant who tasks you with collecting three sacred glands. Obviously those three glands are behind three dungeons with three bosses at the end. Much like its inspiration you’ll get pieces of story littered around in item descriptions and from vague lore to flesh out the world a little.

It’s the gameplay and exploration that is the meat of the game however. You start off in a hub world of sorts, a large area filled with enemies and things to find. The entrances to the three dungeons are located at opposite ends of this area but you’ll have to feel your way through as there is no map and this opening area is very intertwined, samey and confusing. The dungeons themselves are generally a little better as although they have windy paths that loop back and so on there is a beginning and an end as opposed to the hub’s more open nature.

You’ll find the odd item as you explore but generally the majority of your time will be spent fighting enemies. There is a decent variety to them with each area having their own unique sets and Souls fans will be in familiar territory here. You have a light and strong attack on

and you have a dodge on

which turns into a roll if you double tap. Being patient, evading enemy attacks and striking when safe is the key but Mortal Shell does have one trick up its sleeve. 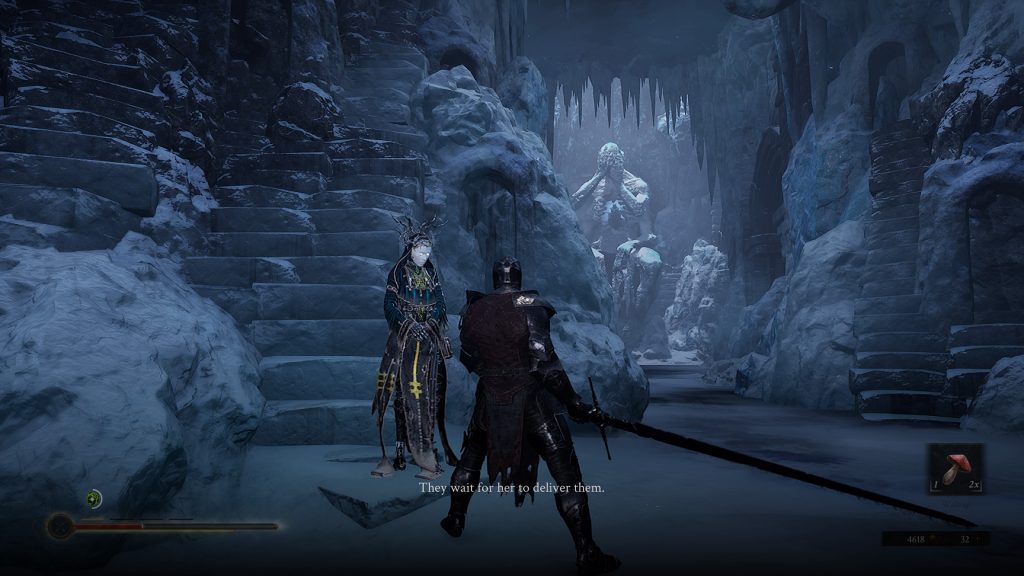 The Foundling has the ability to Harden. This basically replaces your block in other games as it allows you to take a hit without damage and, generally, staggering your opponent. It’s on a cooldown so you can’t spam it but you can use it whenever, even mid attack. This lets you preload an attack, defend against an enemy strike and counter with an attack instantly. It’s a very adaptable ability. You also gain the ability to parry if that’s how you play these games, with upgrades giving you different benefits for doing so but the window is tight as you’d expect.

There are four different weapons to unlock which all have different move sets and attack speeds and each can be upgraded to be more powerful and have two unique supers which use up Resolve which you gain through battles. These weapons and upgrades need to be found but once you discover a favourite the combat can be very satisfying and the boss battles are my favourite part of the game.

Mortal Shell is difficult, not the most difficult game of its type but difficult all the same and taking on the bosses and figuring out their patterns and how to defeat them is very enjoyable. Similarly when you encounter the same enemies over and over again you begin to get a feel for them and those that once caused you trouble will start to fall with ease. As such Mortal Shell does what many games have done before it and simply adds more enemies to turn up the difficulty. I can be taking out enemies with little problem and suddenly there will be a big group and things will go poorly. It also likes to spawn surprise enemies on you when you pick something up. 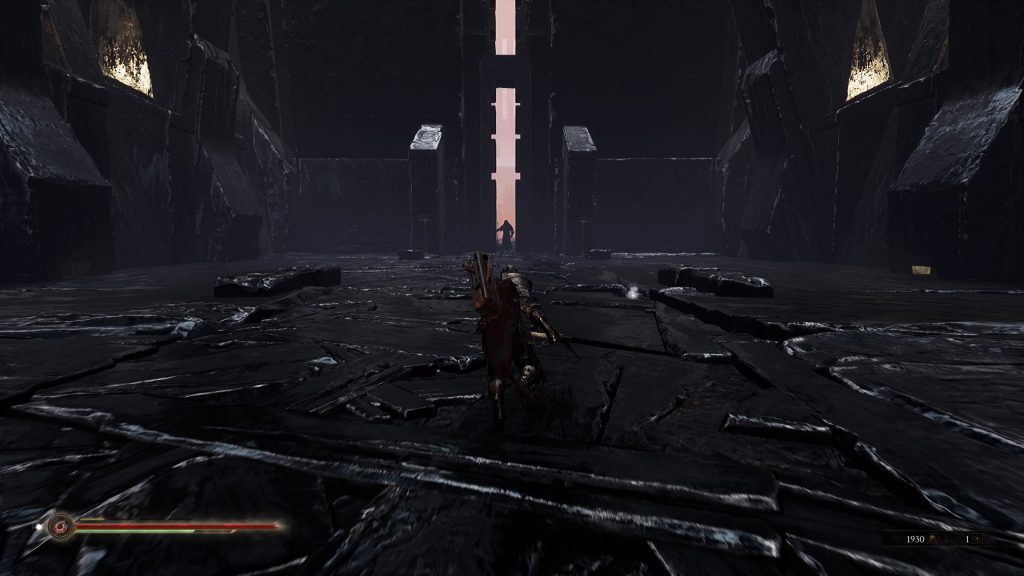 The thing is that the more enemies you have to fight as you explore the more that you have to fight again when you die, so I ended up running past a lot of stuff because I couldn’t be bothered doing it again. This isn’t the first time a game of this type has made me do this, but the problem is Mortal Shell is so short that it’s not like this was an uncommon occurrence, it happened in every area I think and it’s made worse by the long load times on death. I tried exploring as much as I could but I know I missed stuff which breaks my heart.

As per usual if you die you go back to the last checkpoint, with all switches still flipped and everything you picked up still in your possession but the enemies respawn and you drop your Tar (the main currency) and have to go back and retrieve it or die again and lose it forever. It sounds harsh but Souls fans will be used to it and the fact that you keep progress and only, possibly, lose the currency which there’s always more of then it’s not as bad as it initially sounds.

Each of the four Shells you can inhabit has different stats, from higher health to more stamina but you can’t upgrade these. Upgrades come in the form of unique perks which will have Glimpses (a currency) randomly drop or make sprinting cost zero stamina, that kind of thing. Enemies hit hard throughout so having a set amount of health/armour means you can’t improve the situation either. Each area is unique but within the dungeons things can be very samey and as such I did not enjoy the exploration element of Mortal Shell as much as I would have liked. 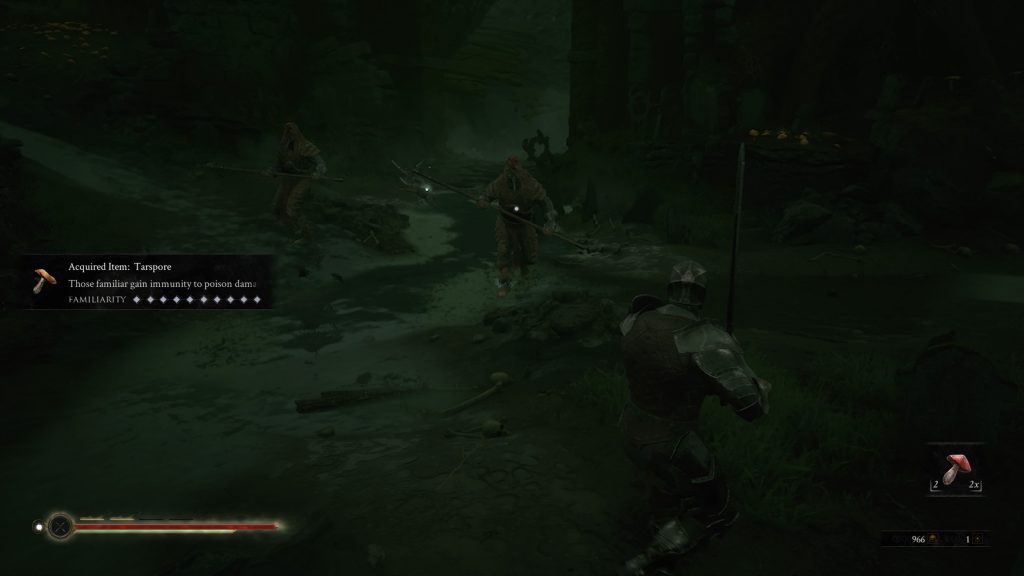 Items are limited, including heals, but there is a Familiarity system where the more you use an item the more effective it becomes. So a healing item which heals over time will heal you up quicker or an item that poisons you initially will actually cure poison. It’s a cool system but heals are quite limited for some time, an Estus Flask equivalent which would mean you always had some sort of heal on hand would have been welcome in the early going.

Speaking of, my start to the game was not the best. I entered the hub area and shortly into it the game gives you your first Shell. Great. Then it shows you a clue on where to go next. As I’ve played games before I ignored this thinking it was the critical path and went another way. Before I knew it I was in a dungeon and had progressed far enough that I couldn’t get out until I’d finished it. I did (no thanks to the boss bugging out and basically becoming immortal) but it meant I had to do it with only a slightly upgraded weapon and I had yet to discover how to level up my Shell (turns out you have to hold the button, not simply press it, which wasn’t clear). I also didn’t have the parry move as you get that from talking to the prisoner.

You can tackle the dungeons in any order, which is cool but the fact that I could get that far, having characters talk to me like they’d met me before, and missing key elements to the gameplay was confusing and off-putting. As I only had the basics defeating the boss was actually quite enjoyable, apart from that time it broke, and it set me up well for the rest of the game but a more linear start would probably help new players get to terms with the systems. 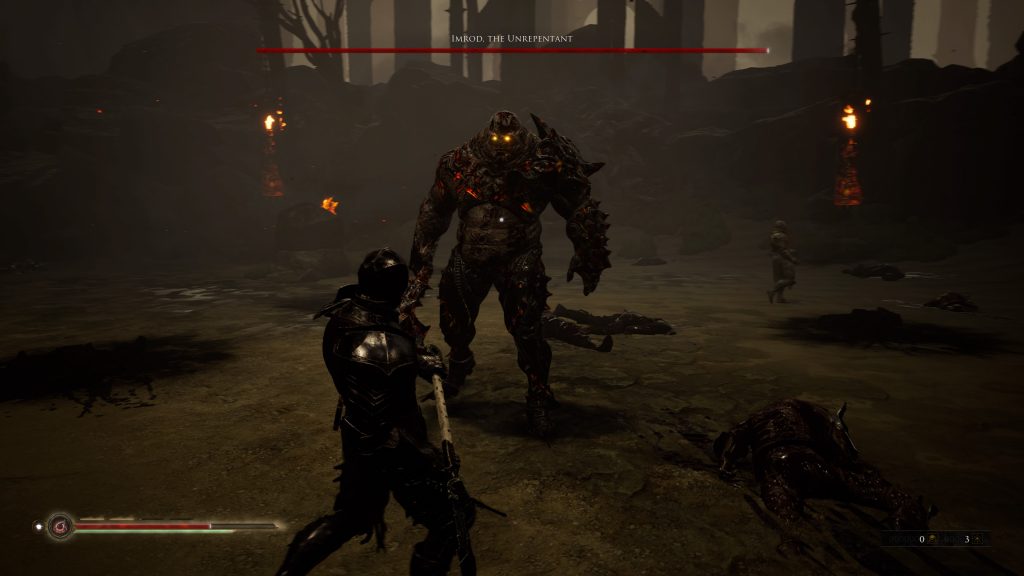 Still, for an indie game that isn’t full price and is trying to take on one of the most influential games of our time Mortal Shell does well. The combat itself is enjoyable which is epitomised by the four main boss encounters (there are a few smaller bosses as well). The Harden mechanic is both simple to use and has some depth to it and the parry mechanic is the risk vs reward that some will thrive on. It’s also obviously a lot shorter which will please some but may disappoint others. For the variety on show the length felt about right for me.

Mortal Shell has some unique ideas which makes the lower than average asking price very appealing. Obviously it’s made by a smaller studio so everything is scaled back a bit but it hits a lot of the right marks. The exploration is a let down for me, with a lack of variety and a reliance on piling up enemies but the bosses are great and what few characters there are are interesting. If the developers so choose there is a solid foundation to build upon here and if there is a Mortal Shell 2 I’ll be eager to see what other twists they can think of.

Mortal Shell
7 Overall
Pros
+ Harden is a versatile ability
+ Bosses are enjoyable to fight
+ Item familiarity adds another layer
Cons
- Exploration can be a chore
- Enemy gauntlets
- Long load times
Summary
Mortal Shell brings some new ideas to the Souls' formula. The Harden mechanic is excellent in its versatility and item familiarity gives you a reason to use your items. The exploration can be a struggle thanks to the convoluted layouts and reliance on stacking enemies but the boss encounters, where it's just you and the combat mechanics, are the highlight.