We took a look at the PS4 version of Monster Truck Championship back in October 2020 and Mike gave the game a solid 7 out of 10, praising its handling and variation while raising questions about how much actual content it delivered.  Well, now there’s a PS5 update from Polish coders Teyon and Mike’s still not sourced a PS5, so it’s down to me to give the game a run out.

As the no-frills title suggests, this is a game where you race monster trucks (a sport that is non-existent here in the UK but seemingly pretty popular in the States) but that’s only part of what it offers.  The game’s career mode starts you off in the amateur league with a series of events ahead of you.  Get through those and you’ll move up to the professional leagues, of which there are two to work through.  Each event is comprised of two or more stages which will either be races, drag races, freestyle or destruction events.

The races are arguably the most tricky, especially early on when you’re less used to the handling of your truck and the bouncy physics that affect it.  Here you’ll race seven AI opponents on sandy and muddy tracks.  Going full throttle here would be a mistake as it is very easy to spin out or hit obstacles.  If you clip the side of a ramp you’ll likely end up rolling onto your roof and even the feintest contact with an opponent is enough to set you back a few places.  More so than any other racing game, you need to be judicious with your use of acceleration.  This can make these races fairly nerve wracking affairs but we did find that it was a lot easier to maintain a lead than it was to get in front.

You start every race in last position and the big, clumsy trucks and often narrow tracks can make early progression quick tricky but the handling of the trucks is very nuanced and so we actually felt that technique and finesse were very important here which made the races ultimately very satisfying.  We didn’t see any evidence of rubber banding and we did like the quick restarts (as well as the fact that you can restart any stage without ruining your event progression). 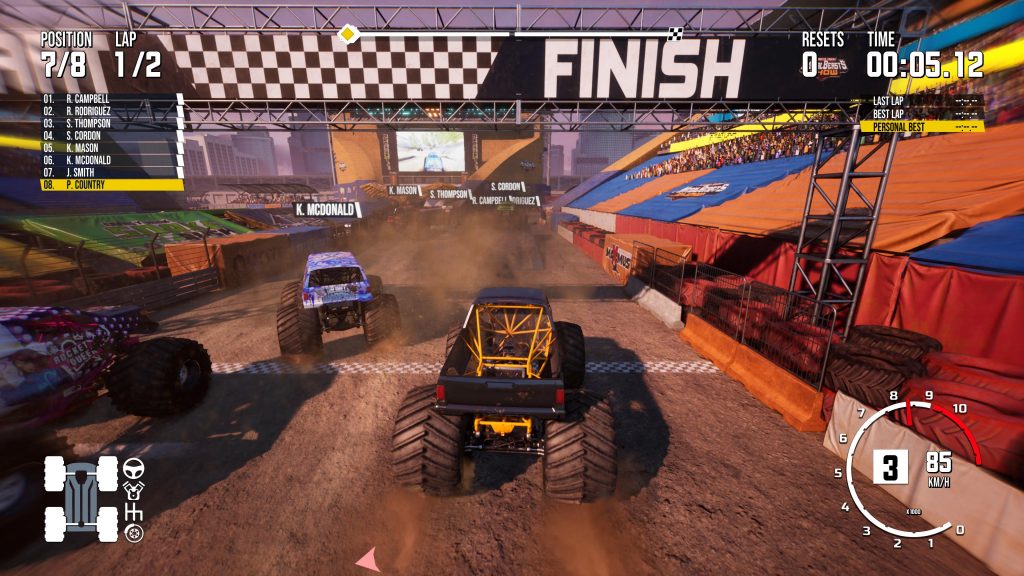 Also fun are the drag races.  These see two trucks going head to head on mirrored tracks.  Getting a good start using your handbrake and accelerator are key and then you just need to get through these short races without messing up.  We loved the fact that these races are always short affairs (around twenty seconds or so) and again the quick restarts make them quite enjoyable to play through.

Then you get into your arena stages which comprise of either freestyle or destruction rounds.  Both of these are very similar in that you are hitting ramps to do tricks and you can build a combo with either stunts or destruction (there are usually cars, caravans and other things to run over for extra points).  These stages play out the same and use the same scoring system so the same techniques generally work.  They are fun but we did find that it was difficult to make specific things happen, like getting into wheelies or pulling somersaults for example.  This isn’t a skateboarding game where you can lean into things to get rotation, once you hit a ramp, there’s no way to modify or affect the trick that happens next.  Which is absolutely fine, these are trucks after all, but it does mean that the tricking isn’t particularly sophisticated.  If you hit some jumps and crash into some stuff, you’ll likely hit the number one spot pretty easily. 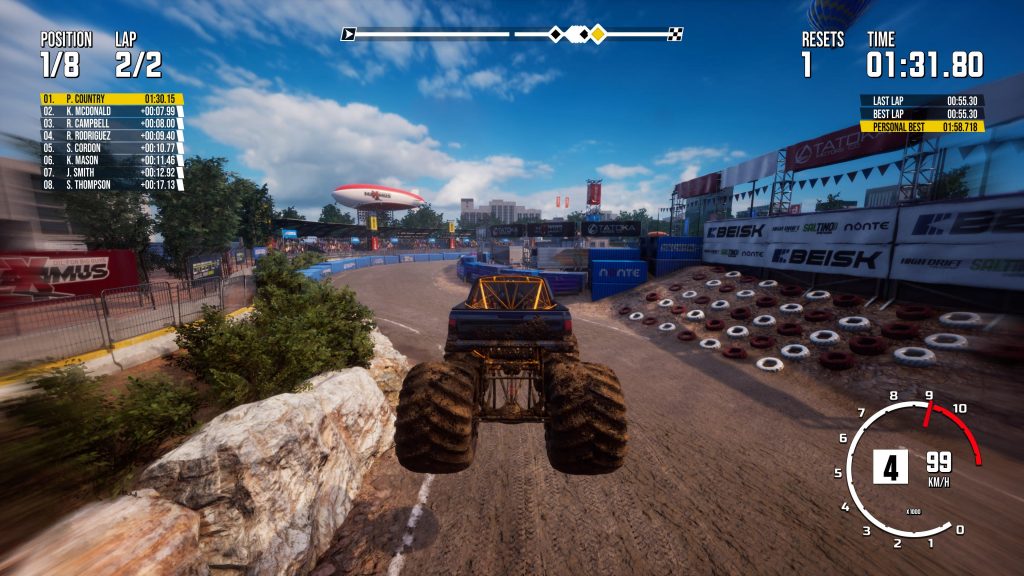 That’s pretty much it for the events themselves but the game does also offer some upgrades and customisation too.  Winning events does pay out and you’ll want to spend that cash.  Unfortunately, all the upgrades are gated behind progression so even if there’s a $40,000 acceleration upgrade and you’ve got two hundred grand in the bank, you can’t buy it until the game says you can.  But we did like the upgrades, the extra speed and (especially) traction do help and before long you’ll be racing more confidently and a bit less like Bambi on ice.

The customisations allow you to get new truck shapes, paint jobs, stickers and accessories which is okay although your viewpoint means you’ll rarely get to enjoy them.  Also, you are just limited to their choice of decals rather than the game letting you design your own and truly customise your ride. 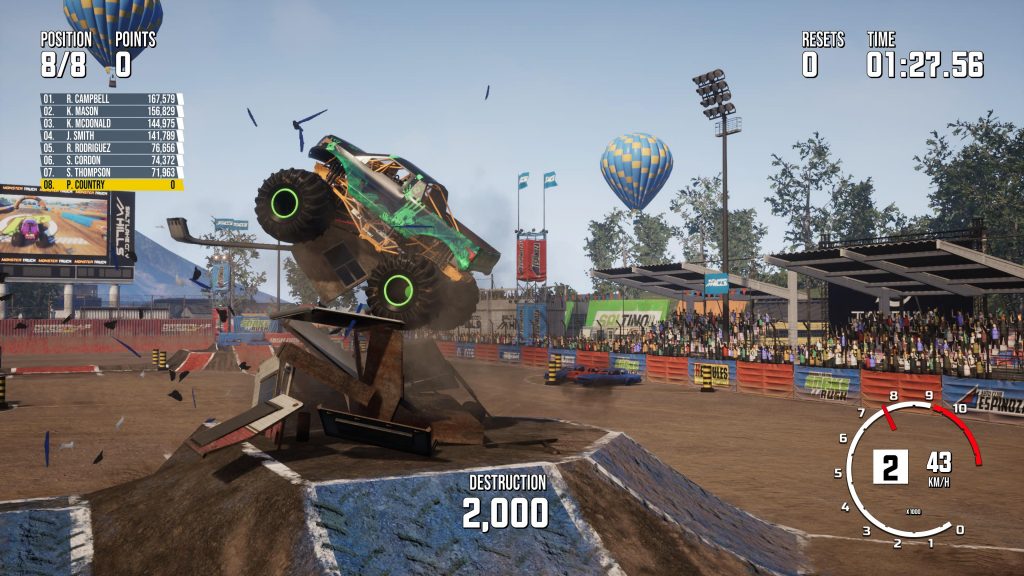 Monster Truck Championship also gates some items behind sponsors.  You get to choose your sponsor for the next event and they’ll pay out in items and cash if you can win events and complete various challenges with them.  This works well but it can be annoying when your sponsor wants you to beat two races in your next event but then you don’t have enough races in it to actually complete the task.  That happens quite often or they’ll ask you to complete a wheelie or something with no reliable way to make those happen.

You also unlock staff that you can use to balance income against truck improvements.  Some add torque, better handling and other technical upgrades while others will earn you more cash.  You can hire up to five of these but those slots are unlocked slowly over time too.

Now, that’s pretty much the same stuff we said during the PS4 review of this title so what does the PS5 upgrade actually give you?  Well, not all that much unfortunately.  The headline is that the game plays out in 4K at a buttery smooth 60FPS.  We don’t normally care about such things but you could really feel the smoothness here.  The game generally looks nice anyway with some good lighting and vivid colours, but the improved frame rate definitely raises the visuals to a new level.  We were a little disappointed to spot some minor texture pop in but this is hard to spot during gameplay. 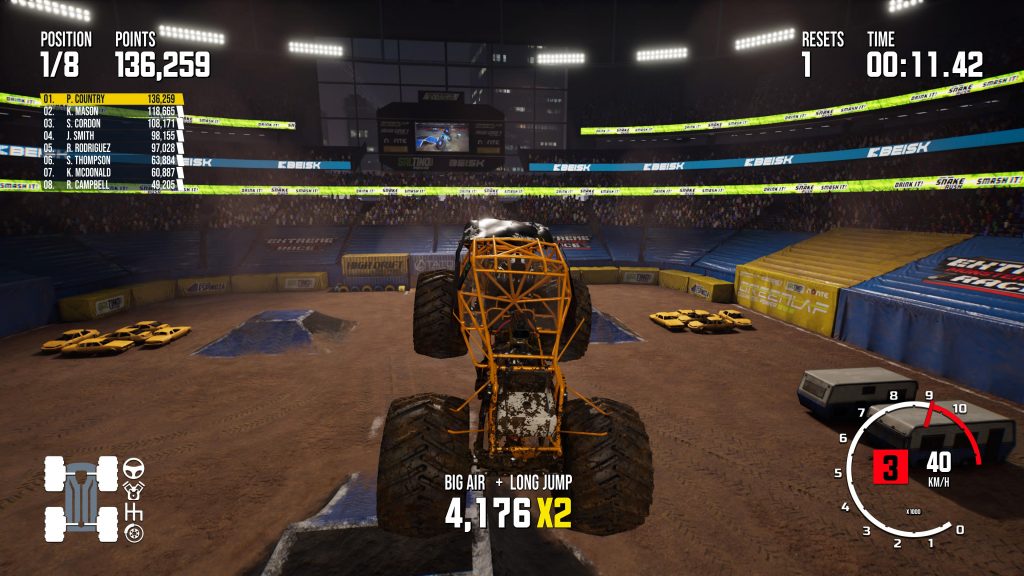 The game’s sound is actually pretty good too.  Thankfully the game doesn’t drown us out with some sort of rock soundtrack during gameplay so it’s all just the roar of engines and thud of collisions.  Played through a decent sound bar the collisions sound amazing, really deep and boomy.  We liked that a lot.  The game maybe could have used some commentary (we’ve just beaten Rock n’ Roll Racing again and so a lack of voice work was noticeable) to ramp up the action and add some personality to the game.

If anything, that’s what the game lacks.  For all the madness that the sport brings, there’s not much excitement in the presentation.  The game instead feels more like a sim than an arcade title and that’s absolutely fine but a mixed approach could have worked but that’s just use being reviewers.  While playing, we have a lot of fun with Monster Truck Championship.  The only other niggle is that we have seen this all before in the Monster Jam series (albeit without those games’ more open world sections).

In terms of the upgrade itself, we were disappointed to not get improved haptics.  All you get here is standard rumble which is a shame as driving games really lend themselves to haptic feedback.  Our biggest complaint about this generation so far is how under-utilised the DualSense is and Monster Truck Championship does nothing to improve that.  But again, these are niggles and if you want some fun, varied, technical racing then this game really delivers but it is all too easy to spot where it under-delivers too.

Monster Truck Championship
7 Overall
Pros
+ Very good handling
+ Genuinely enjoyable, tense and satisfying racing
+ Some good variation
+ Smooth frame rate
Cons
- Is quite short
- PS5 upgrades are underwhelming
- Presentation could be more exciting
Summary
Even for a sport like monster truck racing, Monster Truck Championship feels like the sensible older brother to the Monster Jam series but it delivers some enjoyable racing action mixed in with some fun freestyle stuff. The PS5 upgrade really only comes down to a frame rate boost which is a shame because we'd love to see the developers really push the system further and add some haptics, some more modes and a bit more craziness to what is actually a solid but staid title.