Whilst I do take my motorsport very seriously, I can’t help but admire the spectacle of monster trucks. These behemoths live for big jumps and destruction and Rainbow Studios have arrived to bring for a new edition of the Monster Jam series. Monster Jam Steel Titans 2 looks to build on a steady foundation but doesn’t really add anything spectacular to the table. 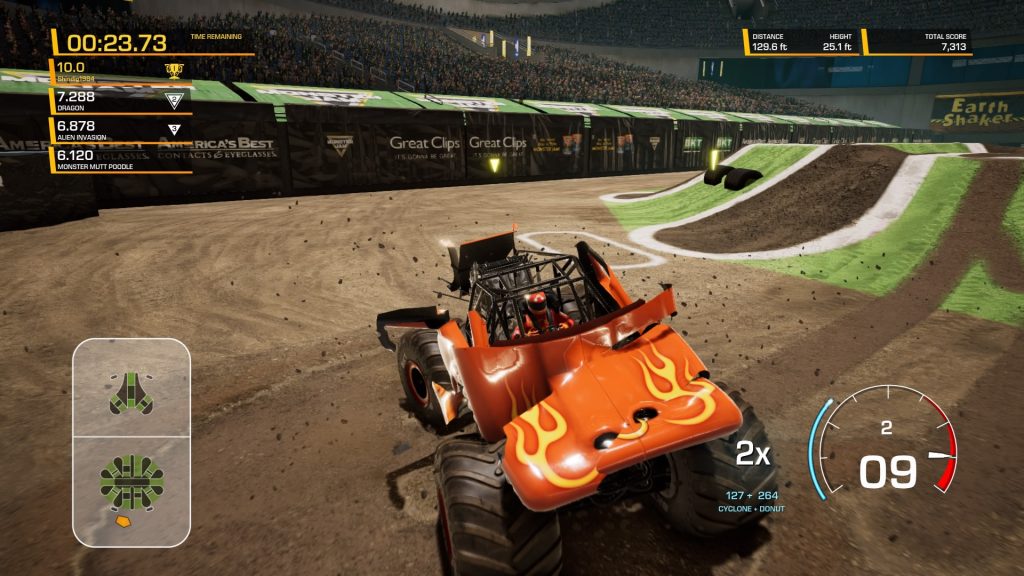 On the surface, not a lot has changed. Handling these trucks remains surprisingly nuanced with speed not always being the key to success. They have sensitive suspension which the uneven territory of the outdoor locales can really upset. It takes some getting used to and I still don’t feel I have the hang of it. Having control of your rear axle does allow you to turn quickly and can be used to help right your truck. You can spend plenty of time freely driving about and each area does allow for some variation. I find the driving much more forgiving once inside an arena where flat terrain tends to dominate. Overall, I enjoy how it handles and the AI provide a stern challenge.

The majority of my time was spent charging through the career mode. This journey features plenty of challenges but races and events all last just a few minutes. Each chapter usually holds four events with the majority of them set inside arena venues. It’s where the trucks feel mostly at home and, whilst there isn’t a huge variety of event types, I still found them enjoyable. Tricks and destruction are typically the order of the day with events usually tasking you with styling out a combo or crushing whatever is in your path. 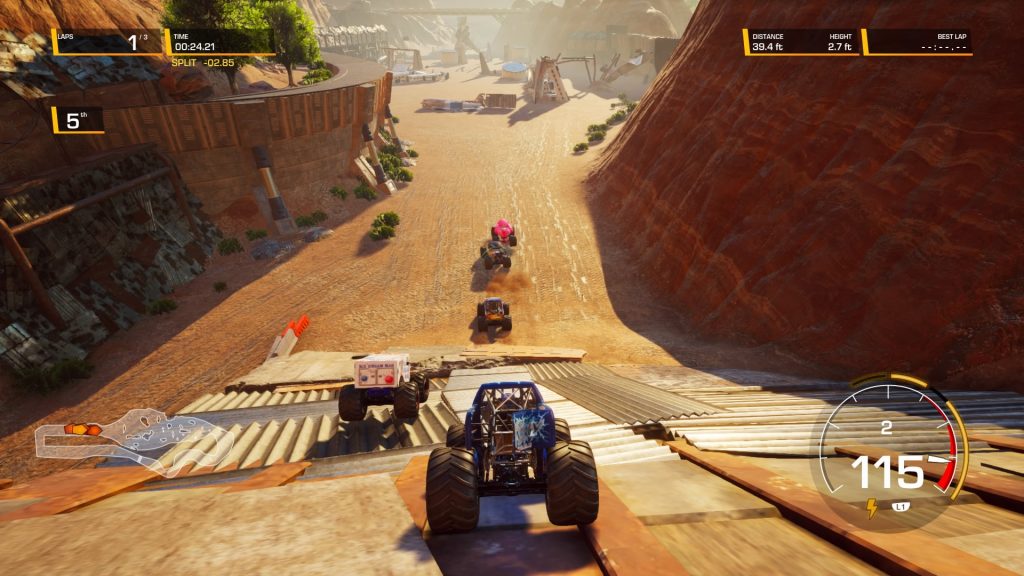 Destruction events can feel quite cathartic whilst the two-wheeled trick events can keep you honest as you try to make the most of your combo meter. The vehicles seem relatively easy to correct I found myself regularly powering out to bring a truck back upright. With the copious amounts of jumps on offer, you can gladly take to the air and keep a good thing going.

Races tell a different story. You have standard one-on-one arena contests that are fairly simplistic. You have one timing-based challenge at the start line but, as the lighting sequence never changes, I could reliably jet off the line into an early lead. The outdoor events deliver something trickier. Waypoint races offer you the change to go completely off-road and find your own way home. This really tests your ability to read the terrain and manage the truck’s telltale bounce. It’s not something I truly got to grips with but the challenge remained interesting. 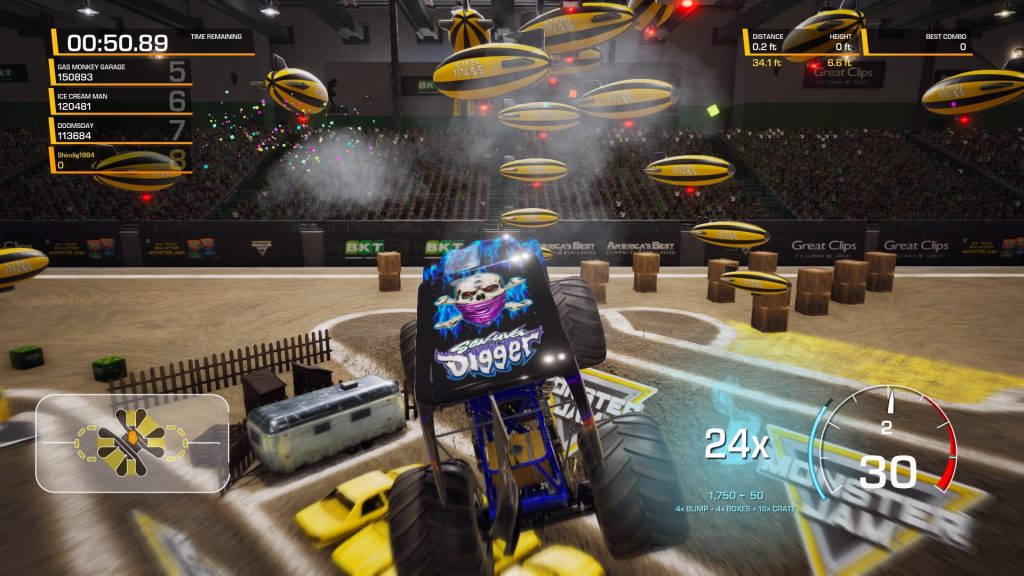 I found the AI to be fairly competitive here and I would sometimes struggle to gain ground on them. Despite the potential openness of these areas, the opposition seemed to always have a set path in mind. There’s other problems with the more conventional races. These will take on a circuit within the larger map and I did often find myself getting lost. Arrows indicate turns and the boundaries of the track but I did need to glance at the mini-map to ensure I was heading in the right direction. Going out of bounds gives you very little time to return to the track and I found being reset was further punishment.

In contrast to the arena battles, I couldn’t really get on with the outdoor races. One of these events tasks half of the competitors to go in the opposite direction and, whilst that is a neat idea, it just added to my frustration. Thankfully, they make up a small section of the career mode and I can see it being great fun against other human players.

These new expanses have a great look to them. They all carry a different motif and add plenty of colour to an already vibrant presentation. Progressing through the career mode unlocks more areas and, whilst they do feel sparse, they have collectables and secrets to uncover. If nothing else, it allows you to get some practice in. 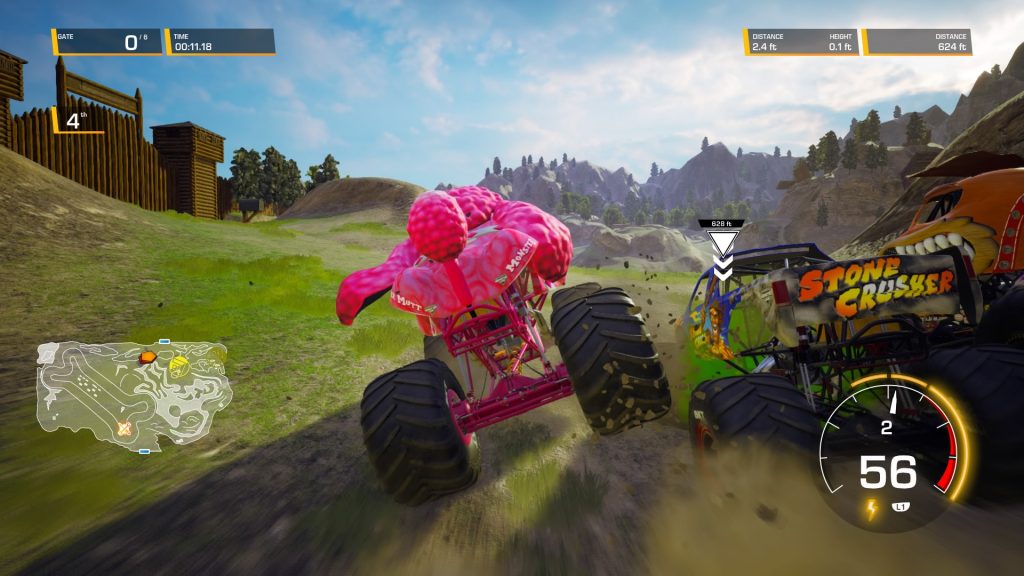 The trucks have had the most care poured upon them. Being licensed Monster Jam trucks, they are expertly detailed and you can really see them fall apart in battle. It’s oddly satisfying to see panels dent and break off during events, leaving nothing but a rollcage. They all look varied and carry a great sense of character and charm. It’s a pity that individuality is diminished by how they level up. Time spent with a vehicle will improve their stats gradually. They’re also part of a team so this experience can spread out towards other vehicles within that stable. What I found was there was no reason to change vehicles for the sake of performance. I continued with career mode mostly with the same truck. It’s a shame there’s not much incentive to switch beyond truck-specific challenges.

Monster Jam Steel Titans 2 feels like a repeat, rather than a sequel. The career mode is brisk but the lack of any new event types can make it feel old very quickly. The waypoint races give you something more expansive to tackle but it’s clear, even in those areas, there’s a path of least resistance. The handling remains solid and nuanced but I’d struggle to recommend something that feels so familiar to last year’s effort.

Review 0
6 Overall
Pros
+ Colourful presentation.
+ Nuanced handling that's satisfying to master.
+ A real variety to the locales and vehicles.
+ Great damage model.
Cons
- A lack of event types lead to repetition.
- The more open areas can be tricky to navigate.
- Inconsistent AI.
- It doesn't feel all that new.
Summary
Monster Jam Steel Titans 2 does provide a decent adventure but it's let down by a real lack of new events. The career mode is very quick-fire but it does highlight how little has changed since the first game. The handling feels sound and refined but I couldn't get to grips with the great outdoors and I found the AI to be hit and miss. The trucks are well presented and the arenas feel varied but, those wanting something new, might feel underwhelmed.