It’s been over eight years since the last Mega Man game. The Blue Bomber saw a slight resurgence during the PS3/360 era and the NES styled Mega Man 9 and Mega Man 10 launched under three years apart. I loved Mega Man 9 but 10 came a bit too soon for me and felt overly familiar, so the long wait for Mega Man 11 should ensure that’s not the case again. It’s also been modernised in many ways. 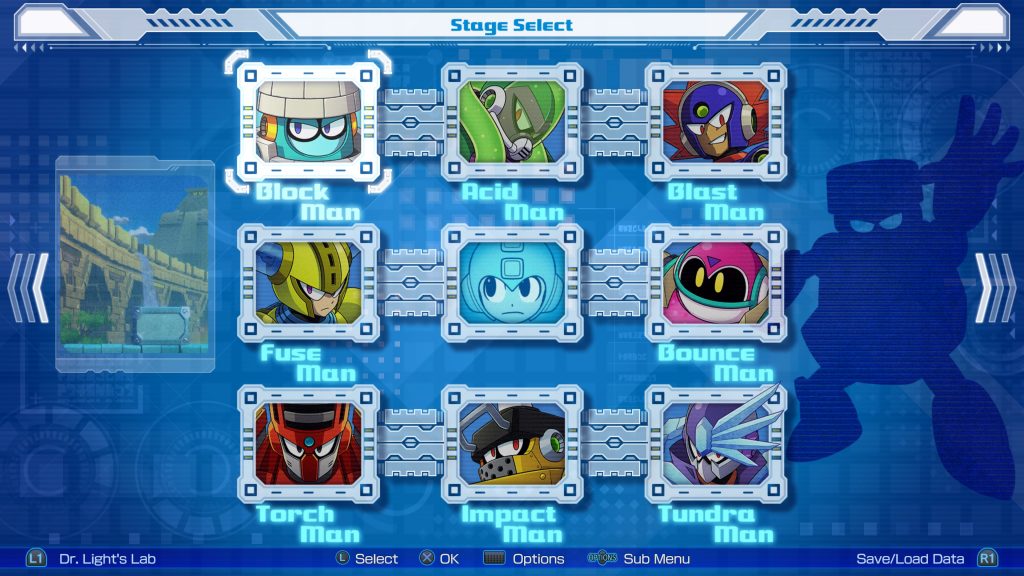 As per usual you play as Mega Man and as per usual Dr. Wily is up to no good again, corrupting Dr. Light’s normally friendly and helpful robots. There is a lengthy cutscene at the beginning of the game with a couple of shorter ones in the middle and an ending, but there’s not that much more story than is the norm for one of these games. In their youth Dr. Wily and Dr. Light fell out over Wily’s Double Gear System, which Dr. Wily has now perfected and put into the eight Robot Masters. Despite disagreeing with its use Dr. Light gives Mega Man the Double Gear System which is a major addition to the gameplay.

Before I get into that though Mega Man 11 plays mostly as you may remember. A 2D side scrolling, action, platformer and tough to boot. Mega Man makes his way through the eight stages, fighting robots, jumping over insta-death pits or insta-death spikes before battling the boss of the stage. Bosses require pattern recognition to defeat effectively and once victorious Mega Man earns that boss’ weapon which he can use to aid his adventure and, more importantly, will help make short work of another Robot Master who is weak to that specific weapon.

Once you’ve made your way through the eight stages you enter Wily’s castle, complete a few more stages, re-fight all the previous bosses and then Wily himself. It’s always been this way, the level design is what differentiates each game and decides where they lie on the scale of good Mega Man games. 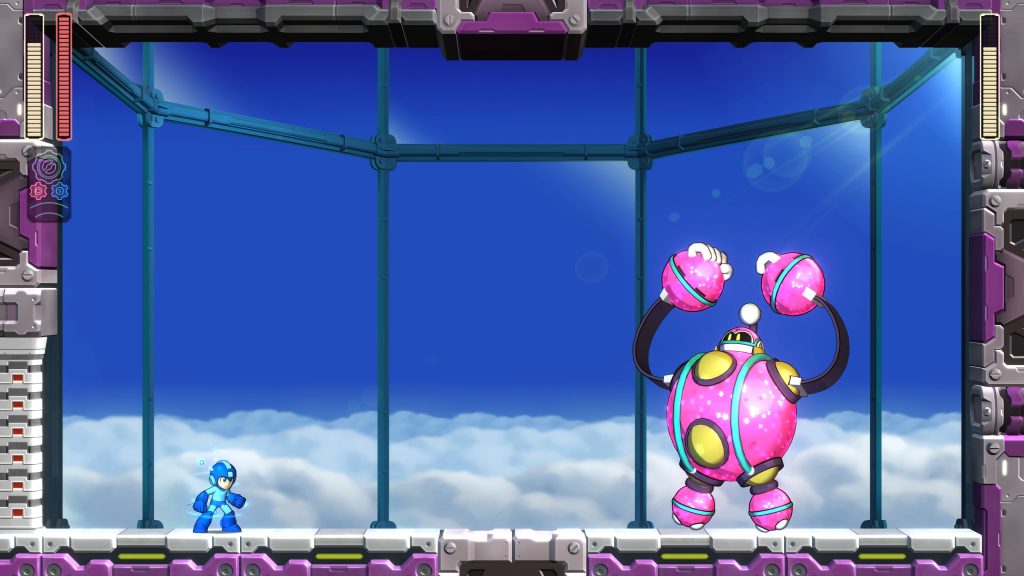 A few of Mega Man 11‘s stages have some excellent gimmicks that really make them stand out. Blast Man has you setting off chains of explosives to either let you progress or try to stay ahead of, Acid Man contains perfectly safe pools of liquid that a certain enemy will try to acidify if you’re not quick enough and Bounce Man’s stage will infuriate and delight in equal measure with very little solid ground. You also get more common gimmicks like Block Man’s conveyor belts or Tundra Man’s slippery platforms and windy platforming conditions, but each level feels different from the last.

Capcom are struggling to come up with original boss ideas however, with Torch Man being another fire user, Fuse Man being electricity and the aforementioned Tundra Man being ice. That doesn’t make the battles unoriginal however, with each boss having a default set of moves and, thanks to the Double Gear System, a second set of attacks that they break out once you’ve damaged them enough.

For Mega Man the Double Gear System grants him speed or power for a brief time, governed by a meter that will overheat if you overuse it. Speed will slow everything around Mega Man making platforming sections easier or making enemies easier to read, whilst power makes your shots stronger and can change the properties of the boss weapons. It takes some getting used to due to the familiarity of all of Mega Man’s other moves making you approach each level normally, but it feels like the levels have been designed with the Double Gear System in mind. 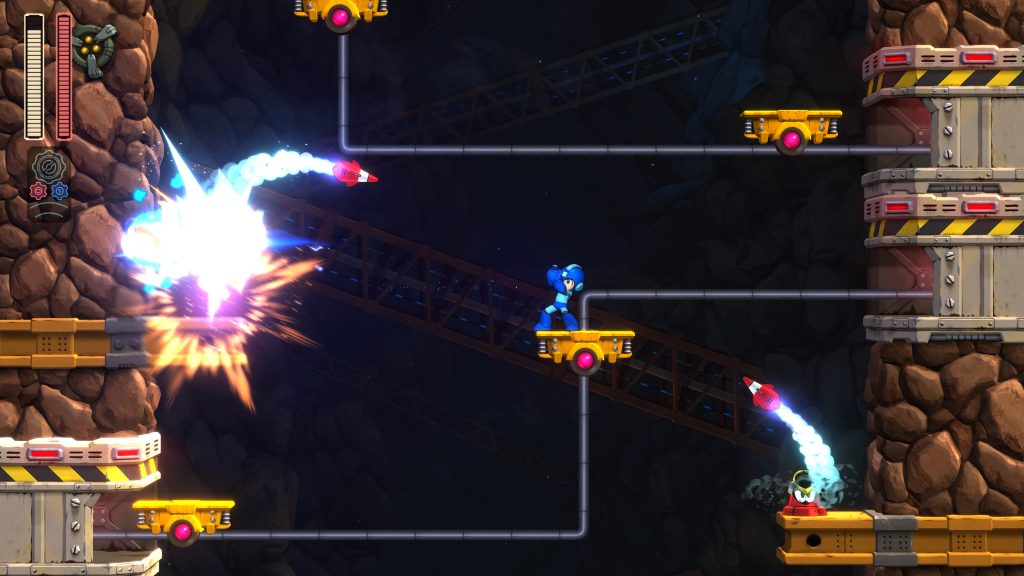 Mega Man games have always been tough, with enemy placement designed to hinder the player and instant deaths from one mistake being common. Mega Man 11 has these too, but once I remembered that I could slow time a lot of these sections became a little less tough. I’m sure they’re possible without its use as well, but when falling into a pit sends you back multiple screens these deaths feel a little more punishing than in previous titles. There aren’t more of these deaths but each level is longer than normal with a similar amount of checkpoints making the trek back to a particularly difficult section more disheartening.

There are four difficulty options so you can cater the difficulty to your own tastes, somewhat. I played through on Normal which is tough, offering a couple of lives (but infinite continues) and enemies dishing out a decent amount of damage. Above that is Superhero difficulty that removes all items from the levels, power ups don’t drop from enemies and everything does more damage. You have two options if Normal is too tough for you. Casual gives you more health and lives, whilst Newcomer gives you more health, infinite lives, spikes no longer instantly kill you and if you fall down a hole then Beat, Mega Man’s robot bird friend, will swoop down and save you making it impossible to die from falling. There are still opportunities for instant death and those unfamiliar with Mega Man‘s gameplay will still struggle at points but for those learning the ropes or the levels for the first time Newcomer is a great option as you’ll always be able to start from a checkpoint rather than having to start the level over if you run out of lives.

I should briefly touch on the graphics which, rather than go for the NES aesthetic of the last two titles, have had a modern day makeover. By that I mean they’re polygonal but still keep the charm of the earlier titles. Everything is very cartoony but with some neat special effects used throughout for explosions and the like. It’s not going to win any awards but they’ve done a good job of adapting the old 2D sprites into 3D. The music, whilst not bad by any means, is instantly forgettable which for a Mega Man title is a big no no. Earlier titles were elevated thanks to their soundtracks but I couldn’t hum you a single one right now and I was stuck in some of those levels for a long time. 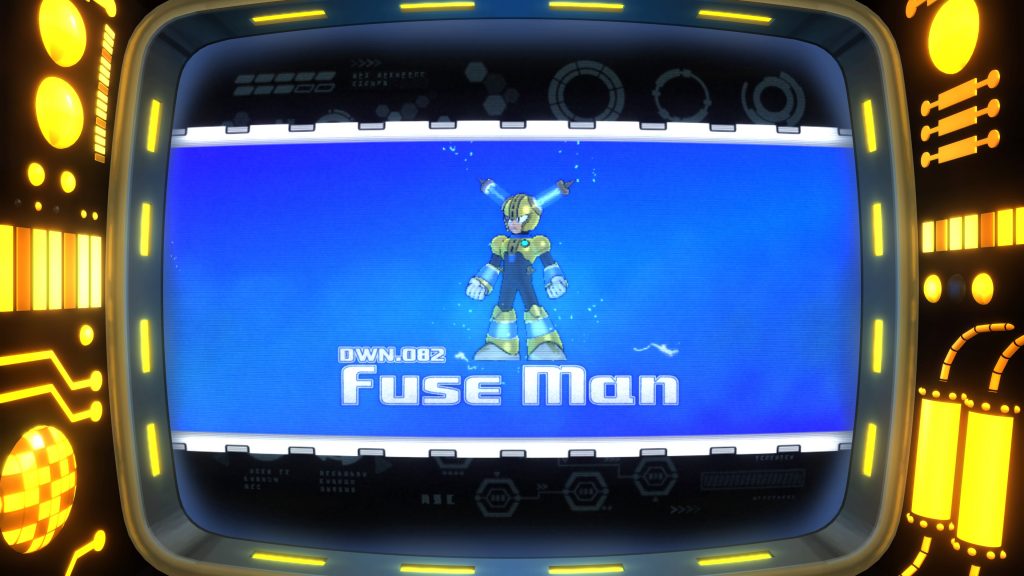 Mega Man 11 is an okay Mega Man game. The new visual style works and the Double Gear System is incredibly useful and can be used in inventive ways, but I’m not sure it could carry another game. The levels feel overly long and the music disappoints. The instant deaths will turn off some but they’ve always been there and Newcomer mode is there for those who still want to experience it but don’t have to patience to struggle through. A decent foundation for Capcom to build on if they choose to do so, which based on Mega Man‘s past is not a given.

Mega Man 11
7 Overall
Pros
+ Double Gear System opens up lots of options
+ Some great level gimmicks
+ New visual style works
Cons
- Music disappoints
- Levels feel a little too long
Summary
Mega Man 11 updates the old formula ever so slightly and is a decent addition to the series. The Double Gear System is incredibly useful and the more modern graphics look great but the levels feel overly long. The music merely being okay is the biggest sin however.