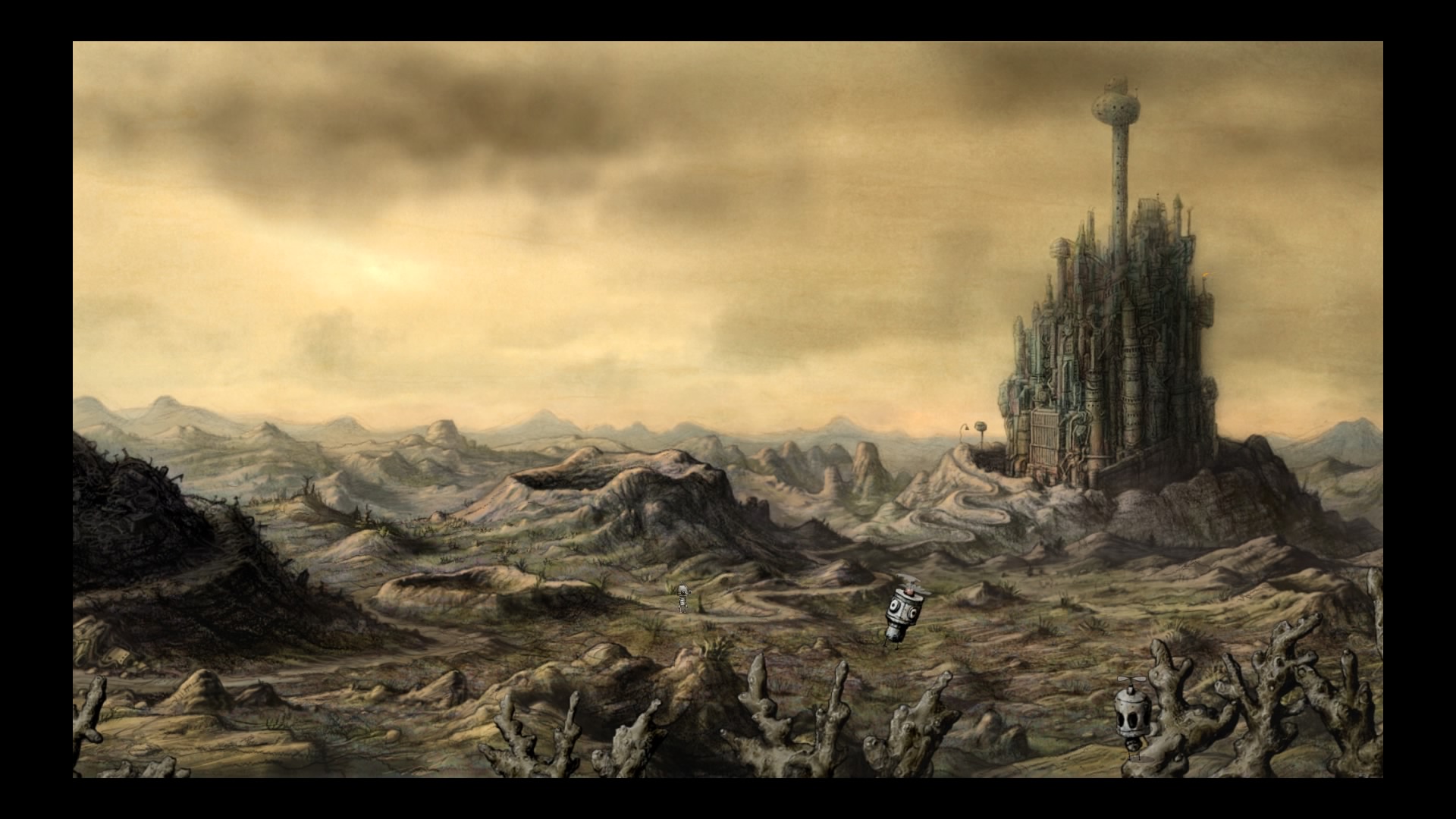 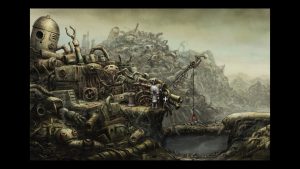 Old school adventure games provide me with one of my big black holes in my own personal gaming knowledge. Machinarium originally arrived in 2009 from Amanita Design who clearly intended to preserve an often revered and maligned point in history. Seven years later the critically acclaimed game is dispatched to fend for itself on current consoles. Whilst there’s nothing new to the package, can the game maintain its charm after such a long period of time?

You begin as Josef, a diminutive robot who crash lands after being ejected from a tower in the titular Machinarium. You’re tasked with getting back there by any means necessary which, as is usually the case, involves a lot of improvisation and puzzle solving. As you progress, story is delivered using storyboards and cartoon speech bubbles which, whilst lacking any genuine speech, do their best to convey the plot. As you delve deeper, you discover new characters to help and new problems to solve. The story’s not laid on thick with it mostly opting to keep things simple.

The presentation on offer really shines. There’s a delicious charm to the visuals which is complimented by a very laid back and fun soundtrack. Each character and environment carries plenty of detail whilst the lack of any speech allows for more focus on well-considered animations. It combines to provide something endearing and the tone offers you a really relaxed encounter. There’s rarely any sense of pressure, even when the plot does decide it’s required. 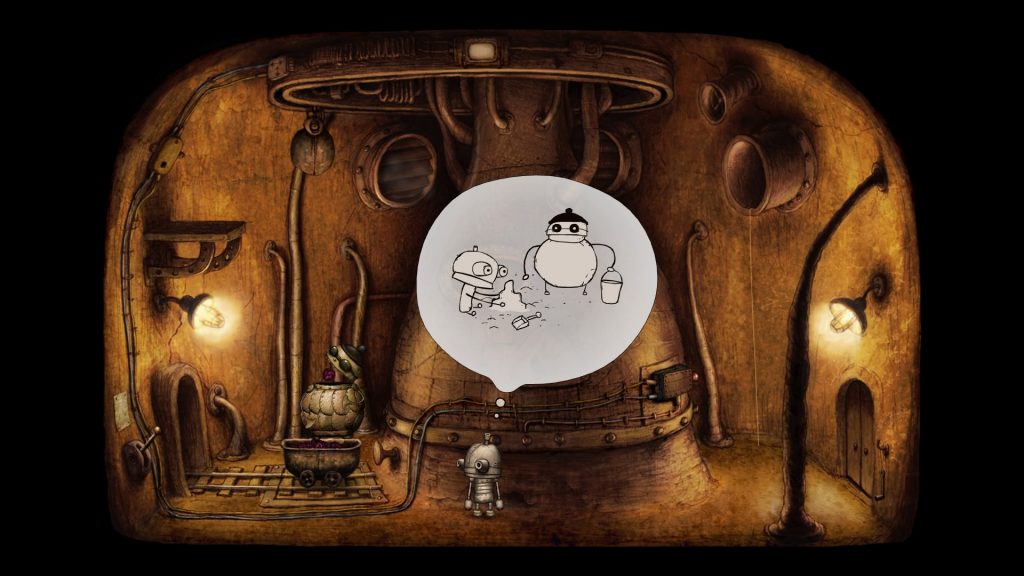 Your controls are simple. Your left analogue stick acts as a surrogate mouse which, for the most part, performs well. There’s a couple of moments where you’re required to think fast which is where the stick’s speed falls a little short. It requires a little bit of foresight but it can lead to some early frustration. Josef can also operate at three separate heights to help him reach for objects normally out of reach. It never becomes a crutch to lean on but there’s certainly moments when you’ll be trying to extend or compress yourself to see if it impacts anything or leads to a breakthrough.  Your inventory rarely gets crowded and nothing is useless.

Machinarium is an adventure game cut from vintage cloth. You’ll scour environments talking to characters whilst trying to find solutions to their problems. With no voice-acting on show, the characters express their desires in nicely presented speech bubbles and storyboards which get the point across effectively. Within smaller areas, finding what you need doesn’t pose any issues and the cursor is usually good at letting you know where a point of interest is. Larger levels provide ample opportunity to loop back on themselves at a later point to provide some of the game’s finer eureka moments. 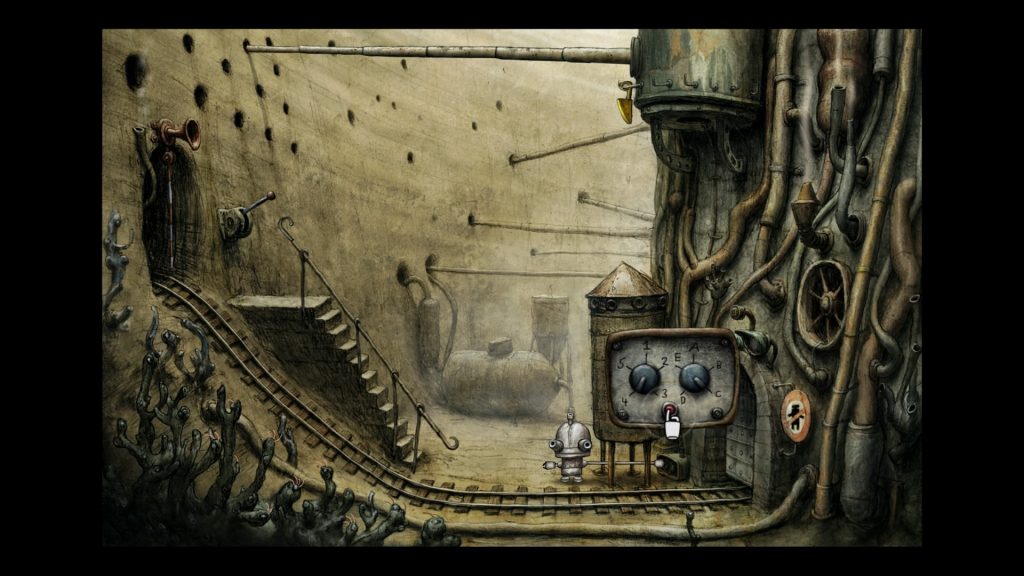 Sadly these areas can also provide a loss of direction. Its a pitfall of the genre but on the rare occasions this game’s solutions do get peculiar, you’ll be wondering how you were supposed to figure something out. A couple of them definitely bewildered me and, in the latter stages you’re leaving problems unsolved not knowing when you’ll return. The game does have a hint system on hand which can largely assist you but there will be times where you just hit roadblocks.

The puzzles provide plenty of variety. You have the usual fetch-quests, environmental conundrums and a sprinkling of logic puzzles which arrive near the climax. None are optional so sussing them out is required to progress. It ensures success is rewarded although it does cut out any real incentive to uncover secrets and explore. That said, your first time through will take you a few hours. The levels you traverse have a nice cohesion to them and the puzzles should keep you busy. 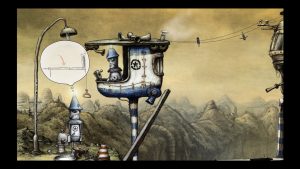 The more I played with Machinarium, the more I could forgive some of its faults. It’s still a game very much of its genre and the artwork does its best to maintain the game’s great look and tone. The hint system is well-designed with your objectives being clearly laid out in enjoyable cutscenes. I can’t quite bring myself to stay mad at it, even when I embark down the wrong track with puzzles or are bewildered by some solutions. If it’s something that’s always bothered you in the past about adventure games, maybe view it with caution. It doesn’t carry a lot of filler but certainly carries some genre baggage.

Machinarium
7 Overall
Pros
+ Excellent art style. + Relaxing soundtrack. + Varied puzzles. + A very useful hint system.
Cons
- The left analogue stick is no replacement for a mouse. - Some puzzles can feel a little obtuse. - Larger areas can become a little daunting.
Summary
In spite of its occasionally obtuse moments, Machinarium has enough charm in its presentation to win me over. There are some clever puzzles in this package with plenty of assistance on offer to provide enough direction. Sometimes the execution is a bit off and having a controller as a substitute for a mouse can lead to awkward moments, but it's a strong effort that's worth a look.