Loot Hero DX is the latest Ratalaika offering and a game that comes by way of Swedish indie casual gaming specialists Varagtp.  Now with Ratalaika you generally know what to expect – easy trophies, casual gameplay, retro presentation – but this game is somewhat unlike anything we’ve ever seen before.  Sure, it’s easy, casual and retro-styled but the main gameplay mechanic… well, that’s something else altogether.

You play as a knight who is tasked with taking out a dragon.  Between you and the winged beast are nine levels and eight bosses.  The game is set on a 2D plane and you’ve got to kill everyone.  Pretty straightforward.  But on firing up the game, our first instinct was to press the face buttons looking for an attack button and maybe one for jumping.  But nope, those buttons aren’t used in gameplay.  Neither are the shoulders and triggers.  Instead, if you want to attack anyone you just run at them with left stick.

So, you run through the army ahead of you by holding right on the stick.  Do that for a few seconds and you’ll face the boss who is also dispatched the same way.  That’s right.  You can actually beat a level by running in one direction.  Really. 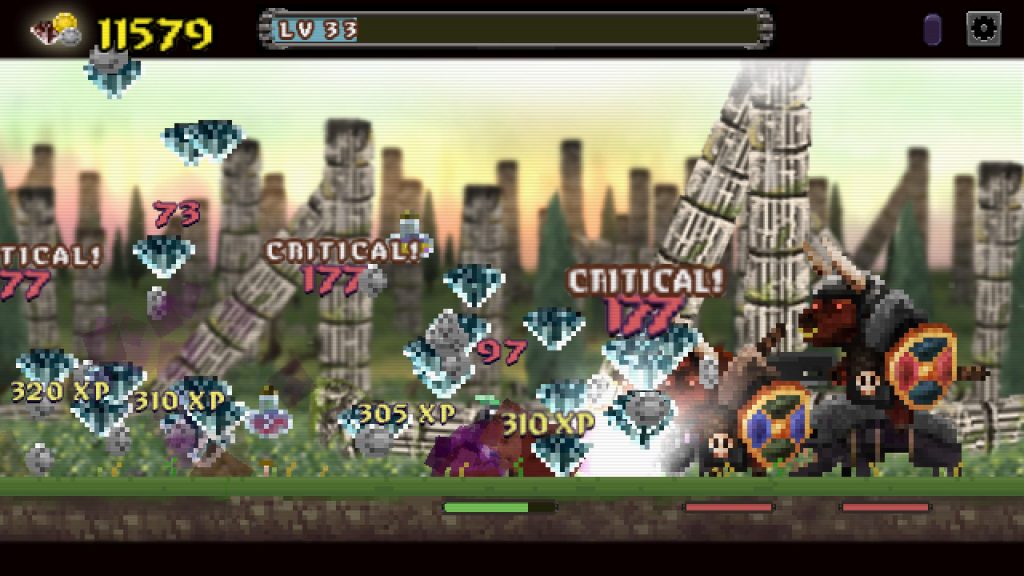 Eventually the enemies you encounter will be too much for you though but luckily you can spend the gold that they drop.  Each level has six shops that you can stop at and these all sell the same four upgrades – Attack, Criticals, Shield and Speed – and so you just throw a bit of your money at those stats (particularly Attack and Shield).  Do that and you’ll easily be able to progress through the next few levels until either the armies or the boss become too much.  Spend everything you’ve earned up until that point and continue.

The only real point of resistance is usually the dragon on the ninth level.  To beat him you might need to grind for a few extra seconds.  Enemies respawn though so if you get to the dragon and die, just press X to revive and then run left and right through the level until you can afford a couple of upgrades (twenty seconds should do it).  Upgrade.  Win.  Go again. 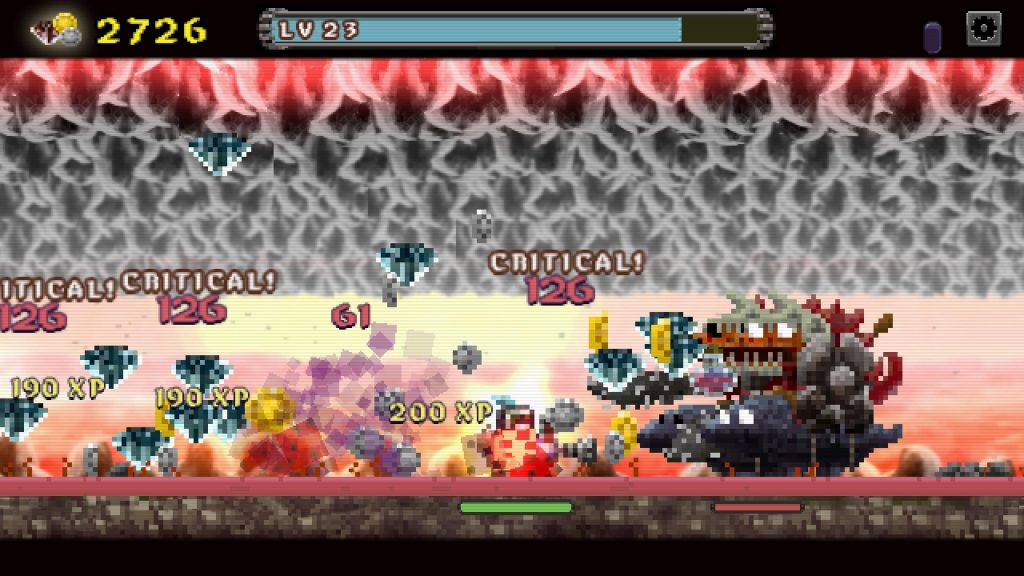 Actually, at that point you’ll have the Platinum trophy and will have seen everything the game has to offer.  That will have taken you ten minutes.  This sort of thing got games like Rise of the Robots absolutely panned back in the ’90s and for good reason, so it’s not really what we want to see in 2021.  Especially on our PS5s.

If you want to get a little bit more value out of your £3.99/$4.99, then you can just keep going.  Beating the dragon will then unlock the next nine levels (up to the next dragon).  All you need to do then is keep running right until you get overmatched.  Upgrade.  Continue.  That’s really there is all to it.  There’s a limit of 99999 gold but upgrades price cap at 9999 and buying ten upgrades will keep you in business for at least the next four or five levels.  But by this time you’ll have upgraded your speed and will be able to beat a level in around five seconds.  It’s ridiculous really but that’s how Loot Hero DX rolls.

We played up to stage 102 (it took about an hour) just to get some later level screenshots and see if anything of note happens but it doesn’t.  This is a ten minute game that gives you no reason to keep playing.  Oddly, if you beat the dragon you’ll rescue a miner and they will dig for you when you’re offline, earning money for you to spend next time you are on.  But by the later levels a minute or two of running left and right in a level will see you max out your funds.  So that’s a pointless mechanic really. 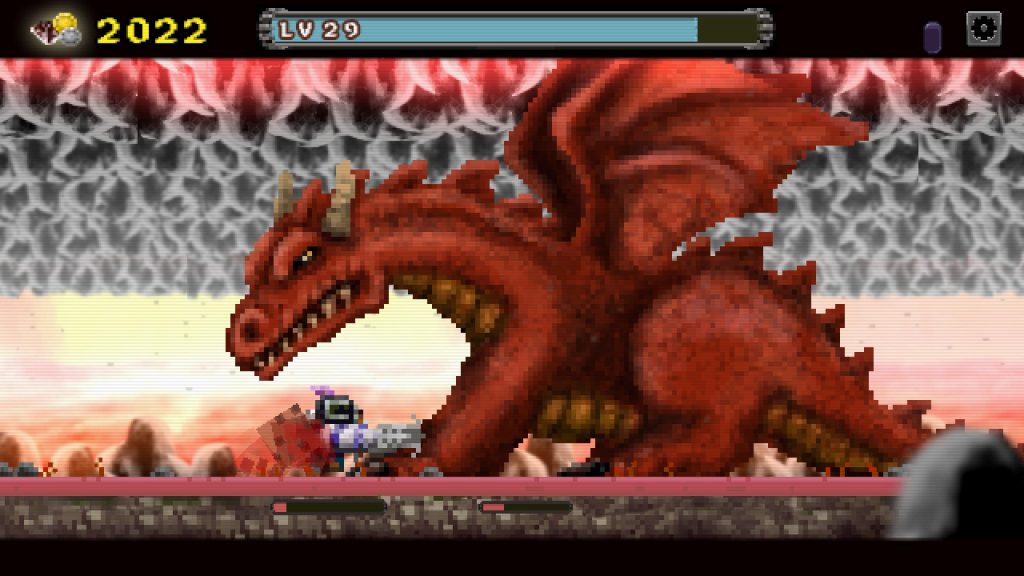 The best thing they could have done for any longevity is make you play until stage 500 maybe.  That’d be a day’s worth of grinding, a word which features heavily in the game’s store information and help screens.  But no, ten minutes is all you need to get everything out of the game.

It’s a real shame because while the gameplay is almost non-existent, the presentation is great.  Admittedly, the menus are quite clumsy but the in-game graphics are lovely.  The game has a zoomed in arcade look with nice pixel graphics but elevated with some nice use of parallax and a filter that looks like a CRT monitor but nice.  It also moves at a frankly ridiculous speed, which is quite impressive.   You need to see it in motion because the screenshots don’t really do it justice.  But these visuals married to a good game, well that’d be quite something.  The music and sound effects are good too.

Alas, the gameplay lets the side down.  I mean, it is ‘playable’ but there’s just nothing to it.  No challenge, no strategy, no skill.  We absolutely murdered My Name is Mayo for the same thing but we’re a little fonder of Loot Hero DX because of its presentation and maybe the fact that the upgrading at least has some bearing on progression but really this isn’t good enough at all.

Loot Hero DX
3 Overall
Pros
+ Lovely visuals
+ Tremendous sense of speed
+ Upgrading stuff is alright
Cons
- There's barely any gameplay here
- Ten minute platinum
- Way too easy
Summary
Loot Hero DX has some lovely visuals but has next to no gameplay. Trophy chasers will lap this up but, even at the cheap asking price, there's no substance here at all. You're buying a pretty Platinum and nothing else. But if they use this engine for a real game, we'll be well up for trying it.