Will O’Neill’s uncompromising tale of depression, Actual Sunlight found critical success with a narrative that did not waver over some of the darkest of subject matter. Now he returns with a rather introspective and, dare I say, grim tale of the squeezed middle class. Originally released on Steam in July, it’s now available for the Playstation 4 and Playstation Vita. Sit down, pour yourself a drink and brace yourself. 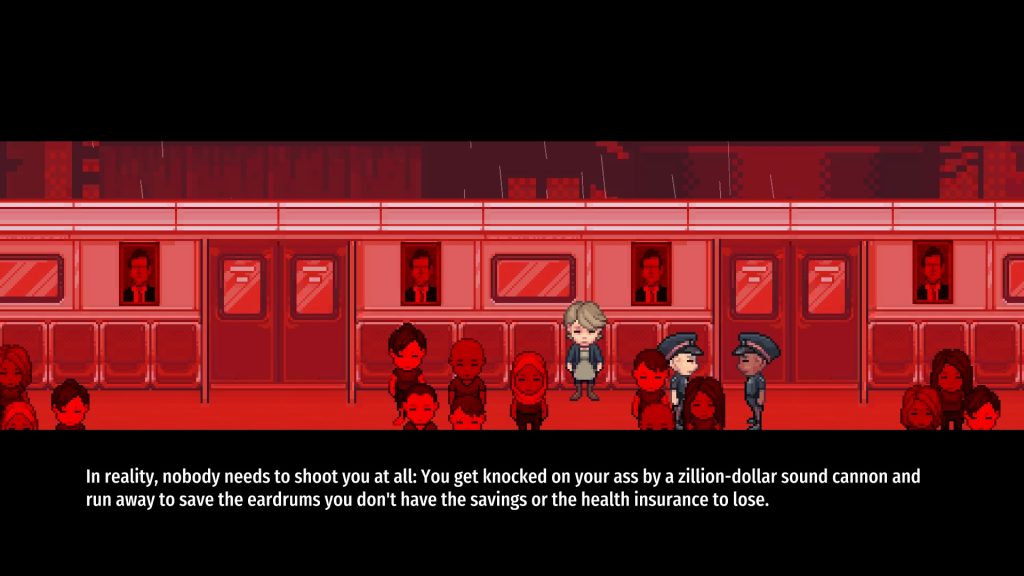 Little Red Lie sets itself in Scarborough and Toronto with two main characters dreading the thought of losing what they have. Sarah is a middle class, single woman struggling to care for ageing parents and a suicidal sister. She’s unemployed and the money is running thin. In the midst of all of this, she lies. She lies to protect other people’s feelings, including her own. She sees it for the best but seems generally stagnant. Those that stand still only seem to go one way.

Our other protagonist is Arthur Fox, a motivational speaker and author who primarily has made a career out of lying. He spends most of his days telling people what they want to hear and likes to appear as a textbook capitalist as he spends big on trophies and status symbols. He has the wife, children, car and business that scream modern success but it’s saddled with a number of crippling vices. 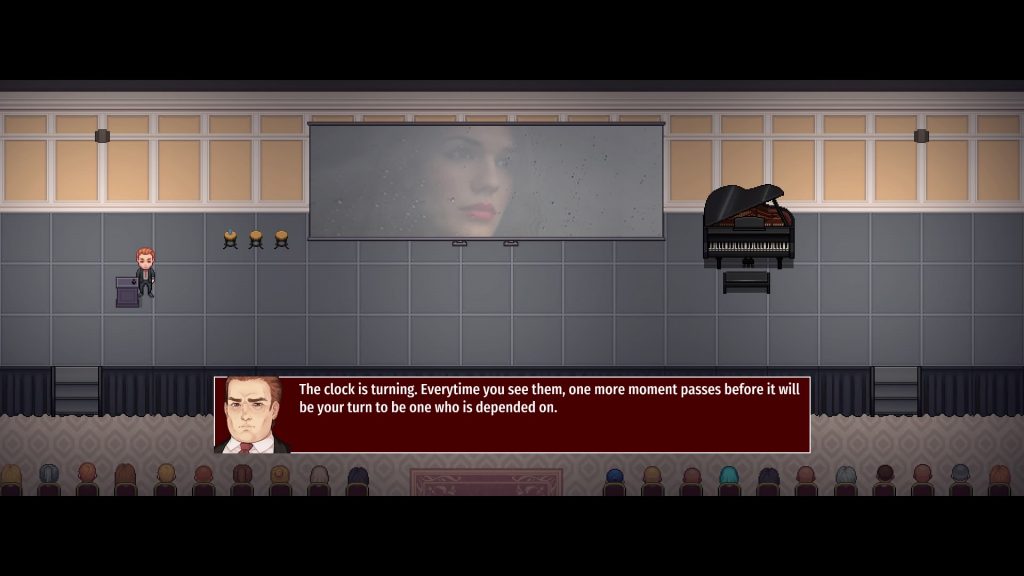 Both characters are established well. Sarah’s introduction especially managed to resonate with me. At times, I agree with Fox’s rhetoric as he bombastically proclaims it on stage. As the story rolls on, we start to see a downward spiral for both.

It’s presented very well. Much like Actual Sunlight, it inhabits a 2D sprite-based appearance. Geometry and locales are reminiscent of a 16-bit era RPG but the contemporary setting and adult themes don’t allow the aesthetic to take the edge off. The game plays out in scenes with each new one opening with a stylish, stark title card which gives the package an episodic feel. It’s paced very well with the 7 hour journey taking time to flesh out the cast before building to a crescendo. Scenes become shorter and more frantic towards a conclusion that, for the most part, feels earned. 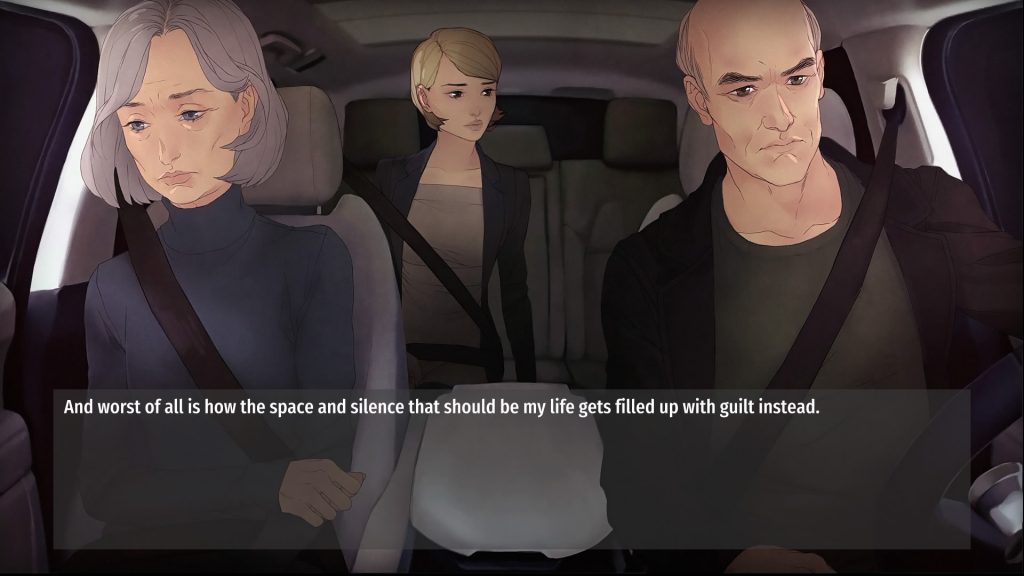 As with most games that are narratively driven, interactivity is somewhat fleeting. You are offered dialogue options but they always lead to the same outcome. You cannot stop or deviate from the path these characters have chosen but some of the options do lead to brief moments of humour. There are also opportunities to directly control Sarah and Arthur. Times like these provide some environmental storytelling and some introspective inner-monologuing.

It’s within the lying mechanic that these white-on-black text interludes become most interesting. You realise that both these characters are not reliable narrators and, at best, some of the lies strip away as you progress. It leads to moments of doubt in these two that make you wonder just how genuine these people are. In many ways, their actions tell you more than their words ever could.

The melancholic tone of Little Red Lie is propelled by a downplayed soundtrack that really does its best not to lift you out of the doldrums. The audio cue and objective text when you are given direct control strikes dread into the situation even further. It really helps enforce Sarah’s stagnation and dread whilst Arthur’s panicked fear also comes ferociously to the fore. It’s nihilistic and bleak with no reverse gear. 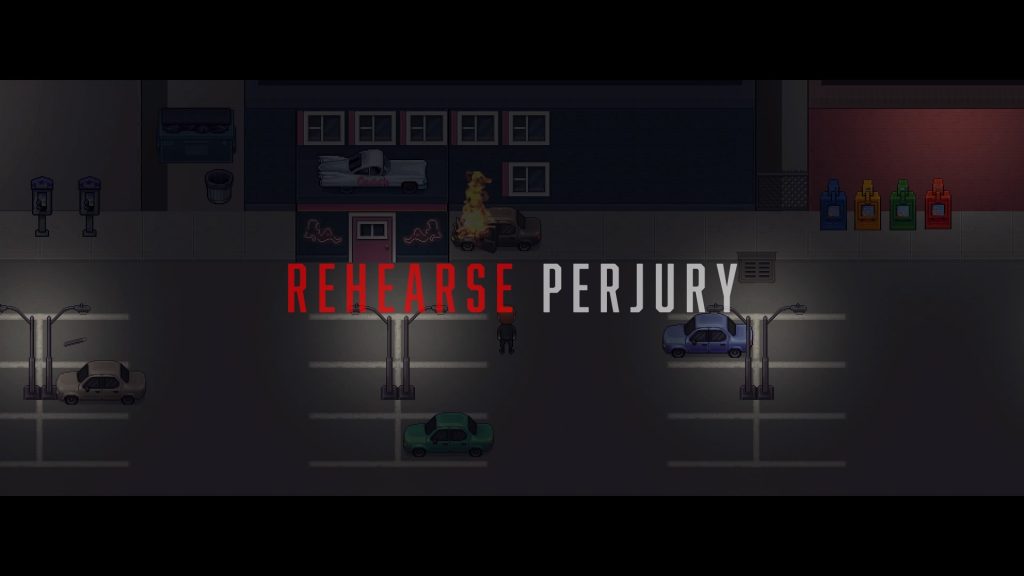 On the plus side, this game provoked much thought in me. Sarah’s introduction particularly irked me as some parts hit closer to home. Her lies are justifiable to her but can wind up damaging those around her. I find Arthur an irredeemable scumbag but one whose lies hold a modicum of truth. This duo is pressured by employment, income and family in a believable way.

It’s a personal game that warrants a personal response from the player. Little Red Lie grew on me after a rather gut-wrenching opening. The interactive elements might feel a little short and sparing, it does help bring focus to a story which is deserving of attention. There is an existential dread you need to be ready for but this game engrossed me to see spiral conclude.

Little Red Lie
8 Overall
Pros
+ Engrossing but bleak narrative.
+ Well presented with some real stylish touches.
+ Characters are fleshed out and believable.
+ Expertly paced.
Cons
- Interactivity is sparse with not a lot of consequence.
- The overbearing tone might be off-putting.
Summary
Little Red Lie is a well-written think-piece that takes the economic strife of the middle class and lays it bare. There is an unrepentant nihilism to it that makes some parts hard to stomach. Persistence is key and, whilst this game doesn't use the medium's interactive nature to its fullest, it does provide a story that will linger and gnaw at you.