Indie games can often have a single strong idea to carry through the gameplay and that’s just what  Let Them Come does.  Armed with a sentry gun, a boombox and loads of bullets your task is to destroy a near endless wave of hostile aliens.  Riffing on the sentry gun scene in Aliens, Let Them Come is a thrilling arcade game for the PlayStation 4. 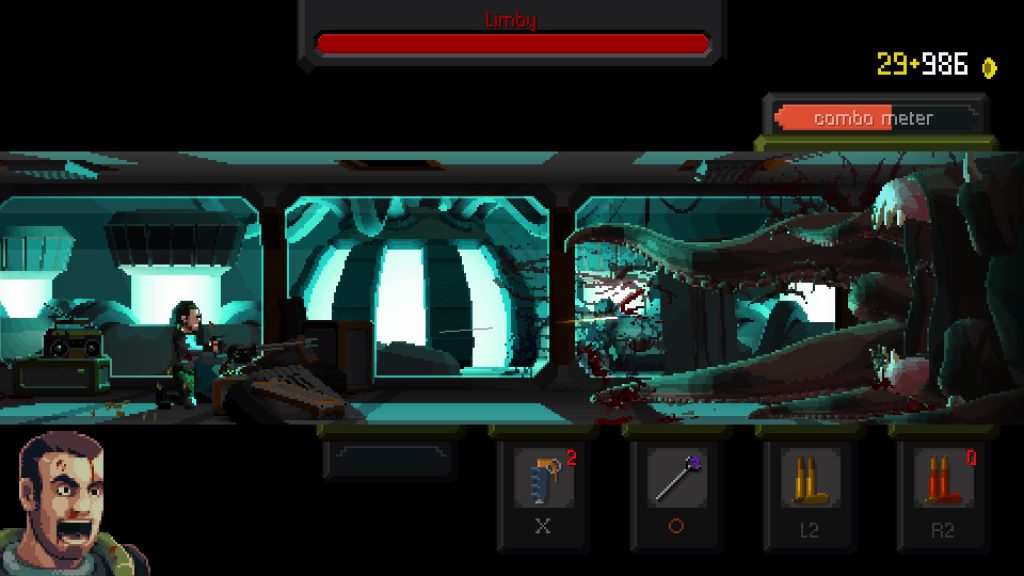 Let Them Come is a very immediate game and forgoes any kind of detailed story. Everything you need to know about the game is readily visible in any screenshot, you play a man with a large mounted gun and have to clear corridors by obliterating anything that moves. Death will come quick, as will restarts, but this makes sure you’ll never be out of the action for too long.

Playing the game you control the angle of your shots as you are firmly rooted to the spot behind the gun.  Enemies always come from the same direction, but can climb on the roof, scamper on the floor or anywhere else in-between.  Therefore the need for precision in aiming is paramount as every wasted shot means the aliens get closer. If the aliens do reach you, and they will, you can chop them back with a melee attack but this is only ever a last resort and if things have got to this stage you’ll likely be dead in short while. 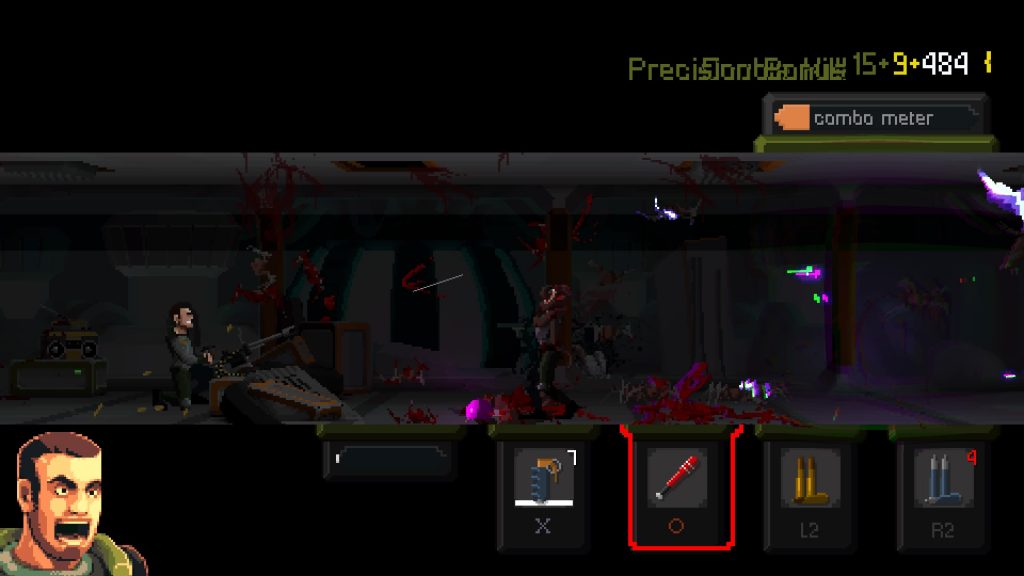 Combat feels good with decent feedback and sound effects at all times.  Aliens will explode in splashes of gore and the screen will be illuminated with neon explosions of viscera.  To aid in the destruction you can lob grenades into the mix which just adds to the carnage in a really satisfying way.  For a game with one key gimmick Let Them Come provides some really satisfying gunplay.

On top of the standard gun there are a raft of upgrade options available through the currency earned with each kill.  These upgrades are persistent and after each death you’ll have more coins to spend on new ammo type upgrades.  These upgrades offer a variety of different kinds of ammo or grenades or melee weapons. These new ammo types need to be refilled after each death making each coin you earn count, with only the standard ammo being unlimited. One of the game’s greatest strengths is the variety on offer here and the way you can switch out loadouts to really give you the edge in certain situations. 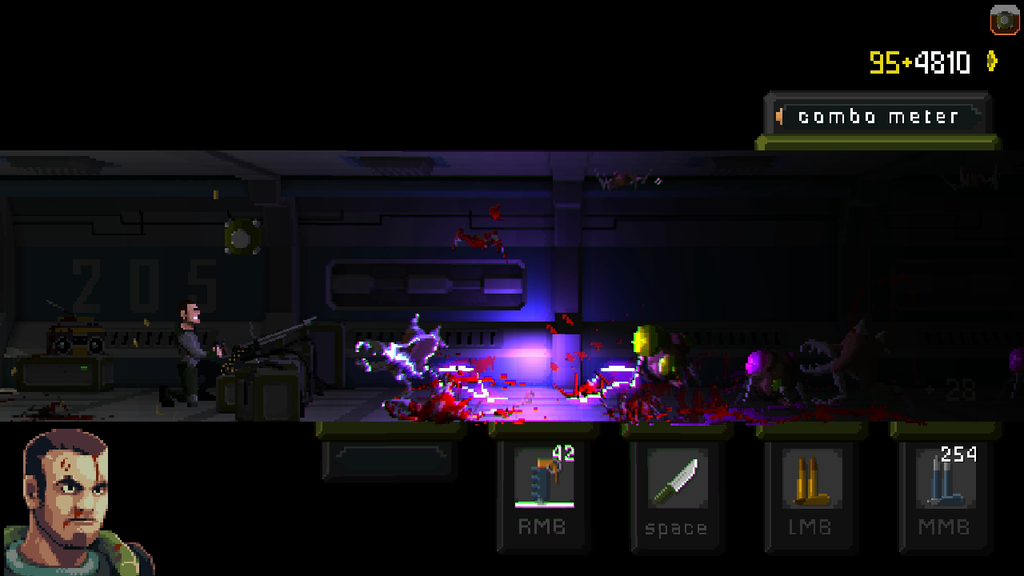 Let Them Come might be a simple game but it certainly isn’t easy. On the default setting the waves of enemies are tricky, but manageable, and you’ll need to rely on the upgraded ammos.  The real difficulty wall comes in the form of the bosses who need pixel perfect and expertly timed shots to defeat.  These difficulty walls form the major gripe I have with the game as they really do stop the flow of play. Part of the problem may be the PC origins of the game and the fact mouse aiming is used on the PC.  On the PlayStation 4 version there is no aiming reticule and shots have to be lined up through sighting the tracer lines and impact marks. In a game where every shot counts this is a real issue as it can take just a second to line your shots up through feedback, by which time you’ve already been hit.

Graphically things look decent with a great art style and overall sense of humour to it. Your health is represented as a picture of your head which grimaces when you shoot your gun and gets gradually more bloody the more damage you take.  The enemy design is also vivid and varied and the graphical effect of the different damage types is great to look at. Things get pretty hectic and the game never slows down either. The humour comes from the way you can choose your background music from your boombox and the animation of how the protagonist moves.  It is all these little details which really make the game look excellent in motion. 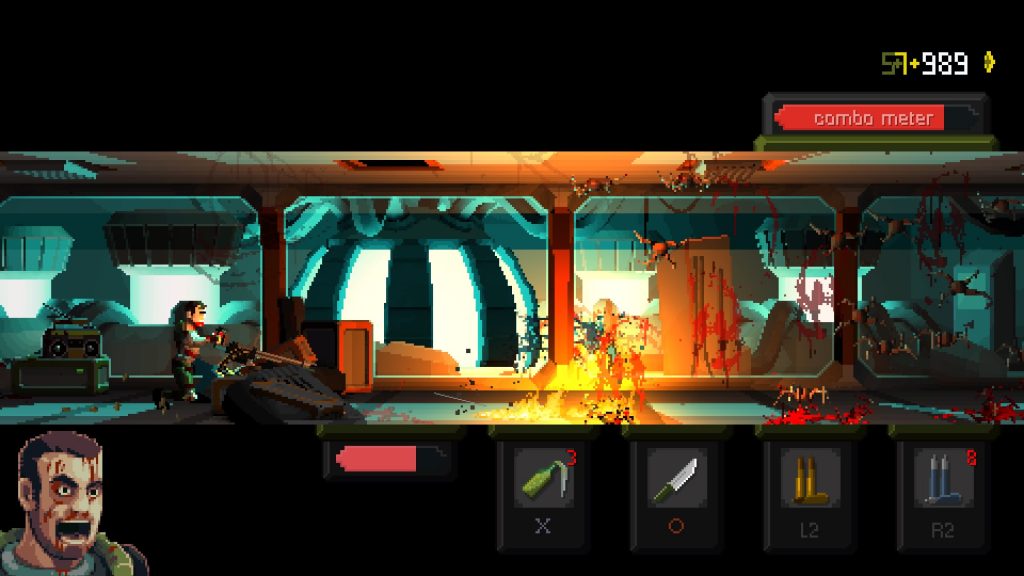 Aside from the campaign levels there are some specific boss challenge levels, which up the difficulty from that found in the main game. As I personally found it a bit too difficult for my liking, my time with these challenge modes wasn’t that enjoyable.  These are the only other bit of content for the game as well so this isn’t necessarily going to be something you’ll be coming back to in weeks to come.

Let Them Come is an easy game to like with a simple, but strong, idea of blasting aliens out of a corridor.  The visual flair and humour really make this an enjoyable game to play.  Unfortunately the punishing bosses make for a harsh difficulty curve which will bring many up short. Whilst it may not be the longest of games, what is here is bags of fun.

Let Them Come
7 Overall
Pros
+ Great simple idea executed well.
+ Good graphical style with lots of character.
+ Nice sense of humour.
Cons
- Uneven difficulty with the bosses in particular being really difficult.
- The lack of an aiming reticule makes the game harder than it needs to be.
- No much here other than the core campaign more.
Summary
Let Them Come is an easy game to like with a simple, but strong, idea of blasting aliens out of a corridor. The visual flair and humour really make this an enjoyable game to play. Unfortunately the punishing bosses make for a harsh difficulty curve which will bring many up short. Whilst it may not be the longest of games, what is here is bags of fun.