Knightin’+ is another retro-themed indie effort from the ever-prolific peeps over at Ratalaika Games, the publisher best known for singlehandedly keeping the Vita alive while also throwing around cheap platinum trophies like confetti.  They’ve explored so many genres (mainly because their MO seems to be to publish pretty much anything that has done okay on iOS regardless of genre) but we’re on very tradition ground here with a top-down dungeon crawler in the style of the original Zelda or Atic Atac (if you’re really old).

You play as Sir Lootalot as he makes his way through four dungeons.  Each one is a multi-floored affair with each floor being twelve rooms.  In these rooms are, as you’d expect, an assortment of creatures and obstacles.  Enemies will either crawl towards you, fly in pre-set paths or shoot things at you, while the obstacles are usually easy to avoid traps or, more annoyingly, towers that shoot at you. 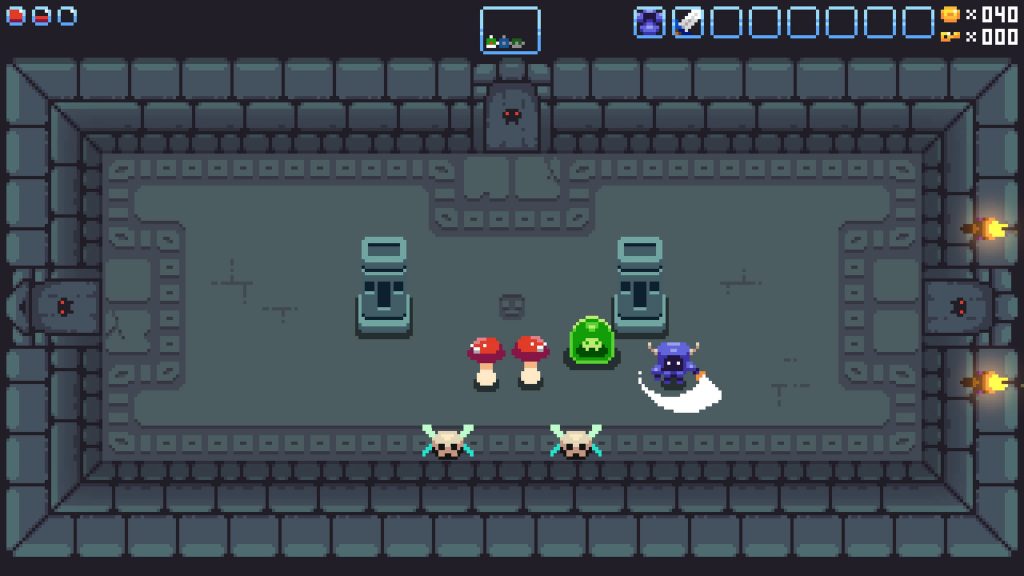 At first you only start off being able to walk and slash away with your sword but before long you’ll get new abilities such a shield, a handy dash move and so on.  For the most part though, you won’t really need them.  The basic combat is pretty easy thanks to the enemies you face being pretty slow, at least until the third and fourth dungeons, and the checkpointing is very generous as there are quicksave points dotted around each map.

The difficulty does tend to spike a bit with the bosses and while these are quite beatable, the challenge tends to come from figuring out how to actually damage them.  Aside from that though, combat in the game is very straight forward.  That said, the bosses might be a barrier for kids who are trying to play the game and they might otherwise have been the most likely audience given how simple the normal combat is. 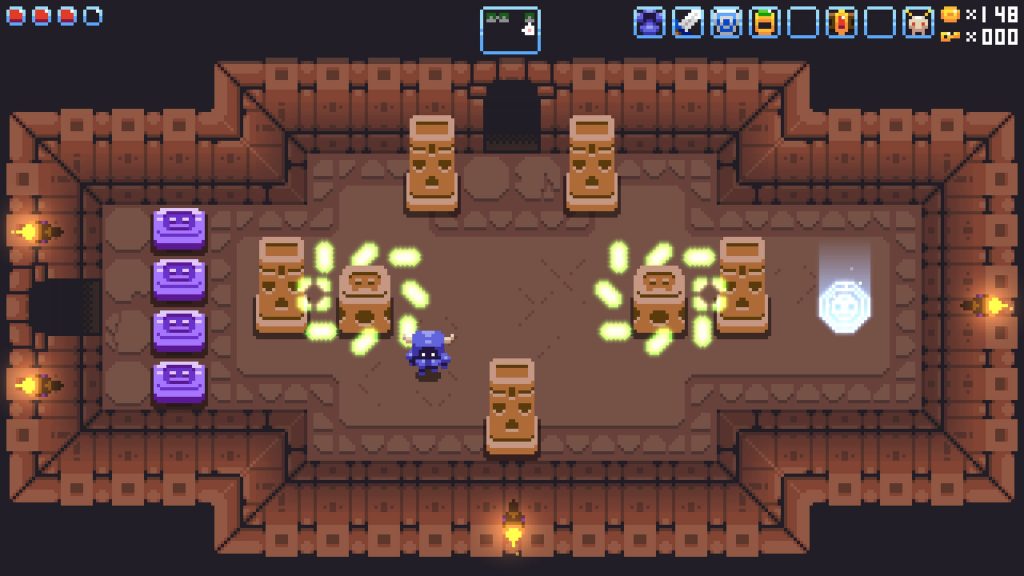 What is less straightforward are the navigation and puzzle aspects to the game.  In terms of puzzles, the game likes to drop in little Sokoban style puzzles where you push blocks onto sensors.  These can definitely slow you down but are doable with a bit of extra brainpower.  The navigation stuff can be a bit of a chore though as often you are trying to figure out where the next key is and there will be multiple exits up and down from each floor, as well as teleports.

This isn’t too bad at the start but by the end it can feel like you’re dealing with some sort of 3D maze.  Especially as the game is happy to let you progress quite far before you realise that you still need a key and that’s hidden behind a puzzle somewhere a few floors back.  It can be a bit of a faff, but it’s all doable in the end.  That’s always been my issue with the Zelda games to be fair. 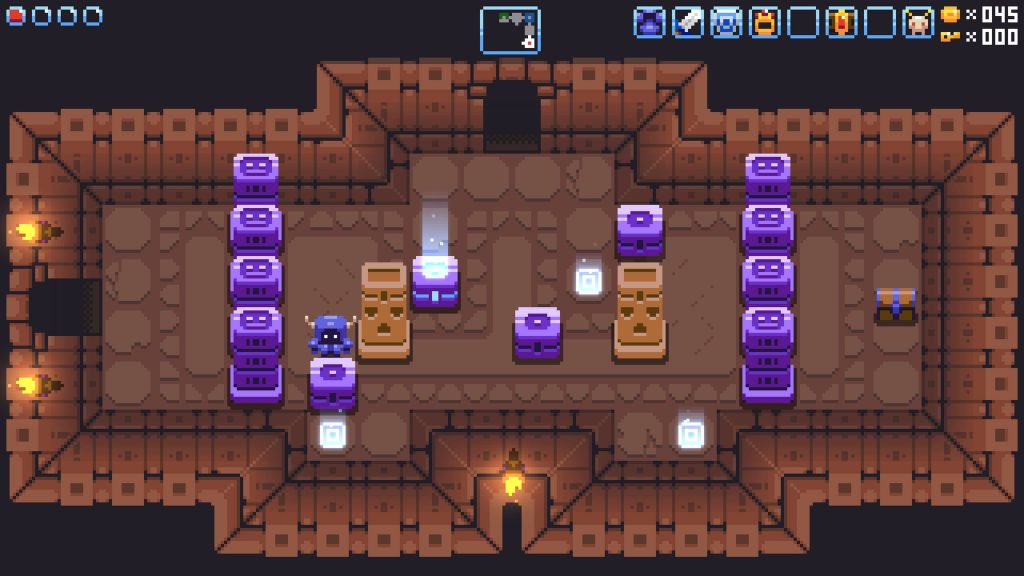 So it’s all fairly straightforward indie fare really.  The visuals are in that ‘better than NES, worse than SNES’ middle ground and there are chirpy chiptunes and some spot effects along the way.  The plot is all explained in text and very skippable, so really this is very much a typical mobile game port.

One knock against the game is that despite you playing as Sir Lootalot, there’s very little loot in the game.  You do get a ring and an amulet along the way but these aren’t random drops at all, it’s all part of the game’s lineal progression.  A little bit of actual looting and maybe some rogue-lite mechanics might have made things a bit more interesting but instead what you get is just a very simple hack and slasher with a few puzzles. 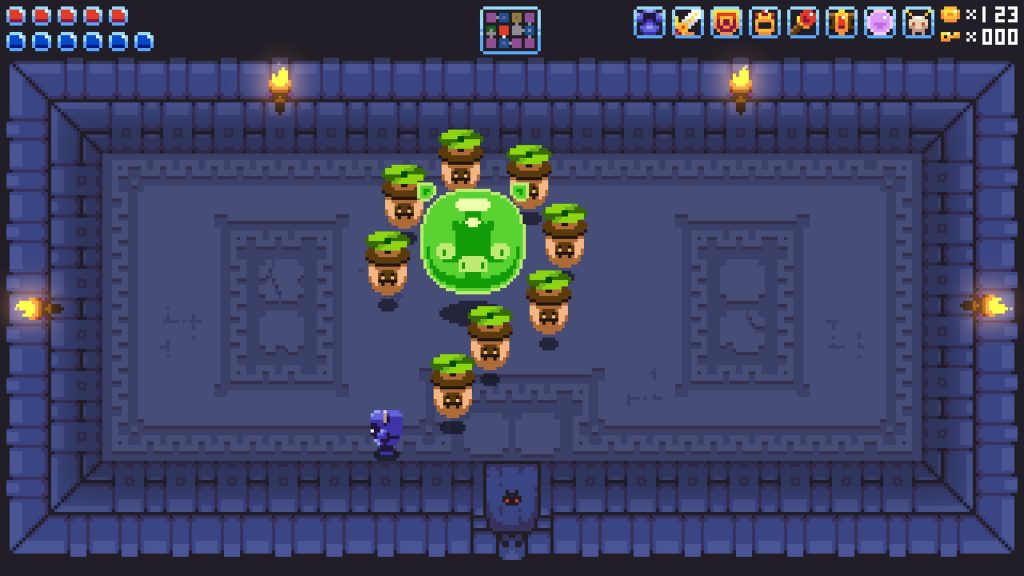 The other knock on the game are the pressure plate puzzles.  There are rooms where you need to stand on blue octagons which light up.  Get the right ones lit and you unlock something.  That’s fine but when there are eight of them and you don’t know the combination, it absolutely sucks.  This is a big problem in level four.

There is Vita support, of course, and thankfully Ratalaika have at least gated the platinum trophy behind three quarters of the game instead of just flinging all the trophies at you in the first twenty minutes.  Overall there are maybe four or five hours worth of gameplay here but not much in the way of variation.  Knightin’+ does at least have a bit of retro charm though and is cheap enough to justify a purchase but, as is often the case with these retro-inspired indie efforts, it doesn’t do anything wrong but doesn’t make much of an effort to do anything interesting either.

Knightin'+
4 Overall
Pros
+ Instantly playable
+ Cross-buy
+ Challenge gets better as the game progresses
+ Sokoban elements are well-designed
Cons
- Yet another pixel art retro effort
- Weak looting elements
- Inconsistent difficulty
- Navigating and backtracking gets less enjoyable as you progress
- Pressure plate puzzles are pure guesswork
Summary
Knightin'+ is a simple hack and slasher that takes no chances with the genre whatsoever but may appeal to adventurers looking for a simple to understand retro-themed challenge.