As the clumsily structured name might tell you, Kingdoms of Amalur: Re-Reckoning is a remaster of the original Kingdoms of Amalur, an open-world RPG that came out for last gen consoles back in 2012.  However, despite sporting a real pedigree in terms of the people behind it, the game underperformed commercially and ultimately led to 38 Studios getting canned by EA (that’s their name, not a number).

Here’s the thing though.  Kingdoms of Amalur was fantastic and easily our favourite RPG on the Xbox 360.  RPG purists tend to fawn all over Skyrim, much to the detriment of any other RPG and that was the case here maybe but Amalur was certainly no slouch.  Designed by Ken Rolston, the Lead Designer of Oblivion (the best Elder Scrolls game) and with a rich lore created by R. A. Salvatore, the game promised to be an epic adventure. 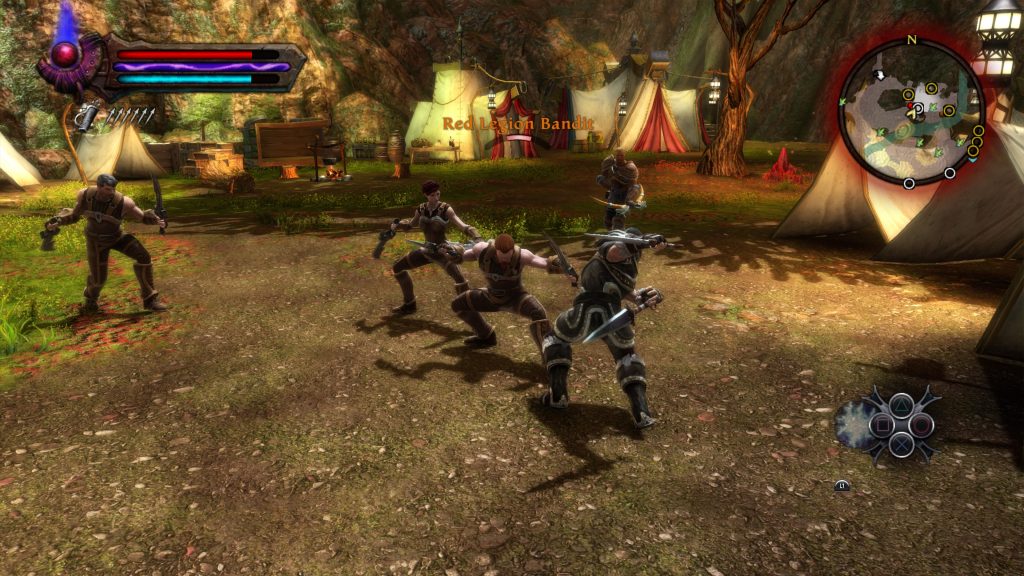 It tells the story of a world suffering from a war led by the Winter Fae, a race of immortal faery folk intent on waging destruction on the mortal races of the land and you’ve found yourself caught up in the middle of the conflict.  You start off dead but are brought back to life by a gnome scientist and here you get to pick what type of character you’ll be.

In that respect this is exactly what you’d expect from an RPG.  You get to pick your race, gender and overall look of course but you also start working on what type of skillset you have too.  As with the likes of Oblivion, you’ll be deciding if magic, melee or ranged combat is your expertise or you can attempt to focus on stealth, although that is weakest of the archetypes on offer here.  As ever, we went with the goateed everyman who keeps folks at range. 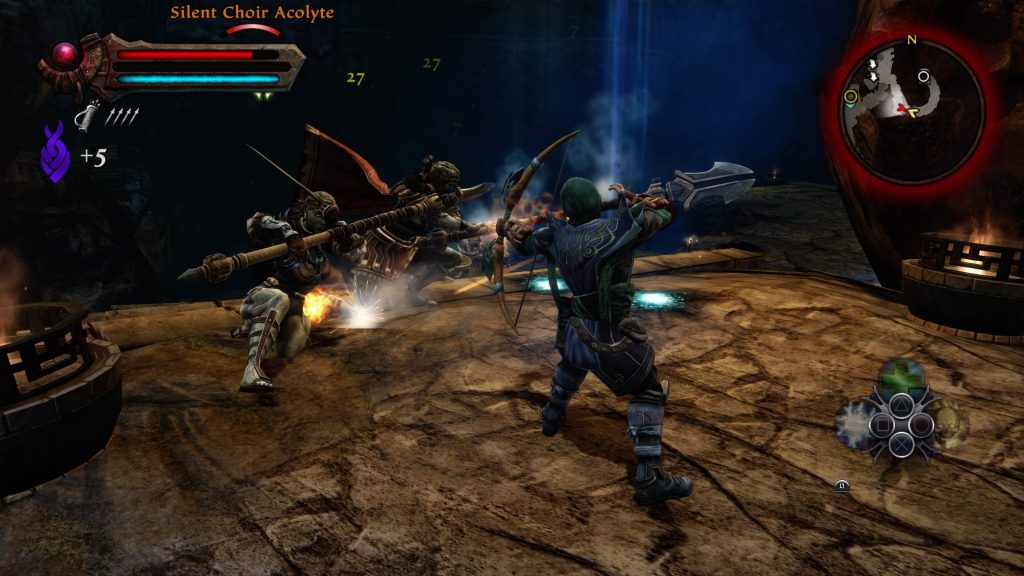 The tutorial teaches you the basics of movement and combat before spitting you out into the world and leaving you to explore your options.  The most apparent thing is that the combat is just fantastic.  You equip two weapons and have a basic magic attack right out of the gate and these are all mapped to separate face buttons on the controller.  This allows you to mix and match your attacks on the fly for excellent results.

So, for example, you might be facing a gang of trolls of which one is bigger and stronger than the rest.  Typically, we’d use a long bow to start putting burning damage on one of them, which will kite the group towards us.  Then we’d hit them with a blast of electric magic at mid-range, stunning at least one of them hopefully and we’d then finish up by going in with our close range attacks before using the handy dodge roll to then get back to range when our magic attack recharges.  Add to that the variety of weapon types from close up weapons like swords to slightly longer range ones like chakrams and you’ve got a really fluid, versatile control system.  It’s also a system that gets better as the game gets harder.  Surviving some encounters requires every trick you’ve got as opposed to other RPGs where after mid-way through you’re basically an unkillable millionaire. 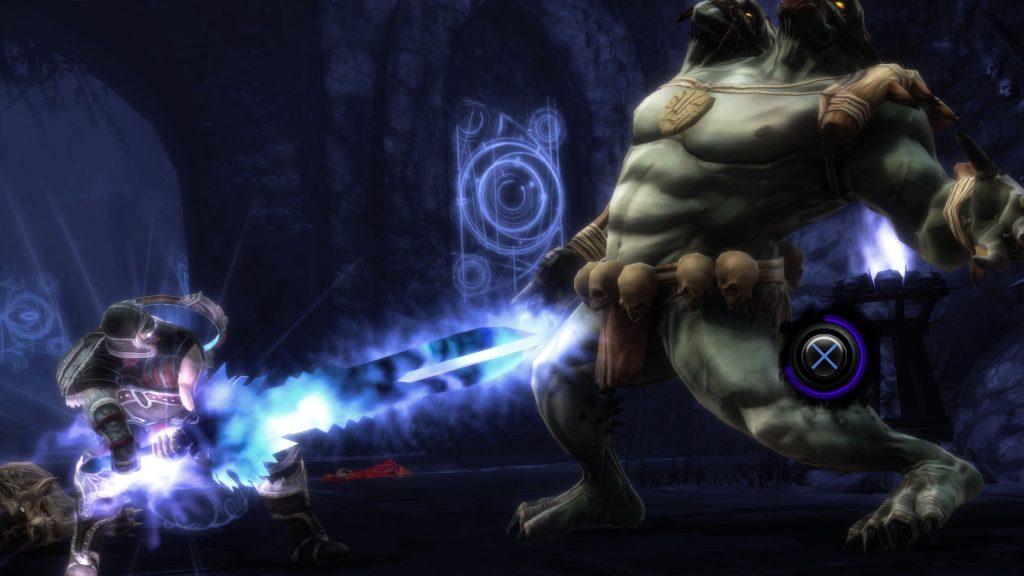 For us at least, the heart of this game is the combat.  Taken as a brilliant, fun hack and slasher, Amalur isalready an excellent game.  However, when you add in the RPG elements, the game is elevated to another level.  It’s not even fair to say ‘elements’ as this is a solid, comprehensive RPG in every way.  You’ve got your massive main quest, a huge number of side quests to undertake, an enormous and varied open world to explore and all the other RPG trappings such as blacksmithing, creating gems to socket into gear, making potions from all the flora in the world and everything else you’d expect.  Compared to Oblivion and Skyrim, there’s nothing missing here at all.

It is your choice when it comes to how much you engage with all those elements.  It’s there if you want to deep dive into the RPG side of the game, which you will need to a bit in order to stay competitive as the enemies get more difficult to beat.  This applies to all the side quests too of which there are many.  Arguably there are too many.  Every new location leads to a handful of new quests and those quests can lead to more.  If you’re someone who likes to clear out the map as you go along, you can find yourself bogged down by them.  Especially as the side quests tend to fall into the usual pattern of finding out what happened to a patrol/spouse/family member for someone or the usual fetch and return tasks that we’re so used to in this genre. 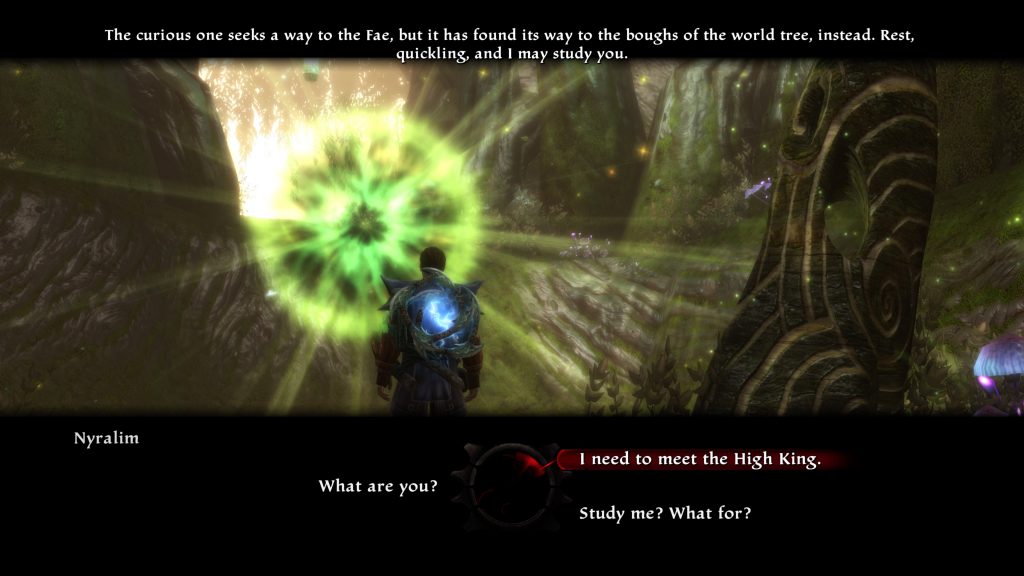 However, it is also a distraction that you can easily end up sinking hours into because the next thing you have to is just there.  Eventually, just for the sake of this review, we had to press ahead with the main quest but kept finding ourselves doing side quests along the way anyway.  Of course, this is a problem for every large RPG.  You may have been the Dragonborn in Skyrim but didn’t mean you were too good to retrieve a vase for an old lady now and again.

To be honest, for the sake of keeping this review at a digestible length, we’re skimming over the RPG stuff here a bit.  There’s a lot to it that encompasses other elements that affect your build, such as fates and destinies that give you bonuses based on where you sink your skillpoints across the three areas of Might, Finesse and Sorcery but you get the idea.  Amalur doesn’t skimp on the RPG aspects of the game at all. 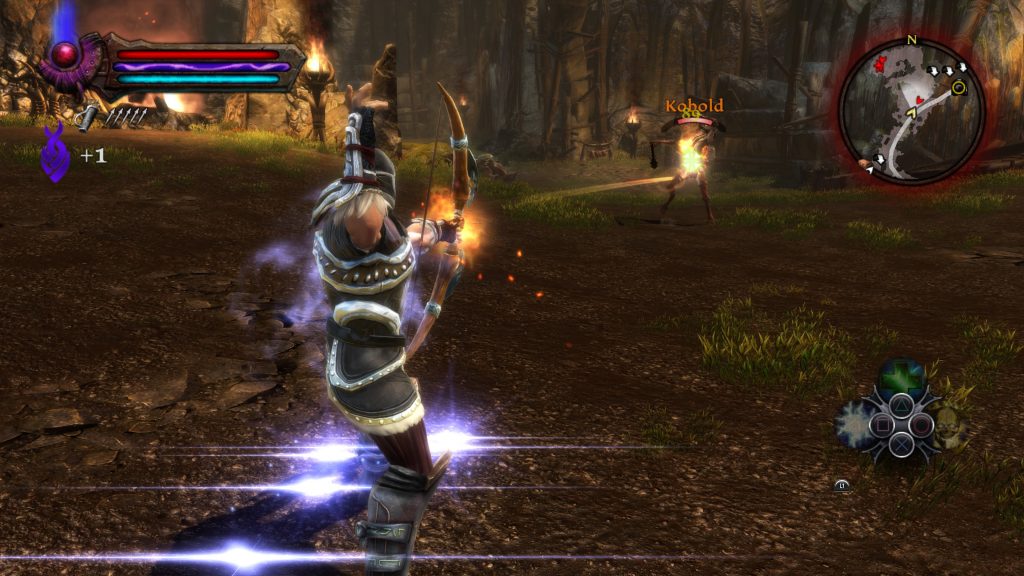 Perhaps the best bit is how accessible it all is.  For all of the choices the game gives you in terms of leveling up your character, the story is big on the idea that you have no fate, that this world is yours to shape as you go along and that means that you can easily re-spec yourself if needed too.  So if a tanky melee-focused build isn’t working out for you, you can ditch all of that and focus on something else.  We played the original Amalur after getting ourselves painted into a corner with Sacred 2: Fallen Angel where we found that we’d basically leveled up wrong and were unable to progress in the game as a certain boss was unkillable under our skillset.  No such worries here.  Amalur doesn’t punish you for making bad decisions.

When we say that Amalur was our favourite RPG of the previous generation that might suggest that Skyrim wasn’t as big a deal to us (although I personally played through Oblivion twice back to back because it was so good).  The reason for that was partly the setting.  That North Tamriel frozen wasteland got pretty dreary and repetitive for us but Amalur‘s world is bright, colourful and varied.  It was designed by Todd McFarlane and while it won’t win too many points for originality, this is an RPG after all, it is a nice world to spend all of these hours in. 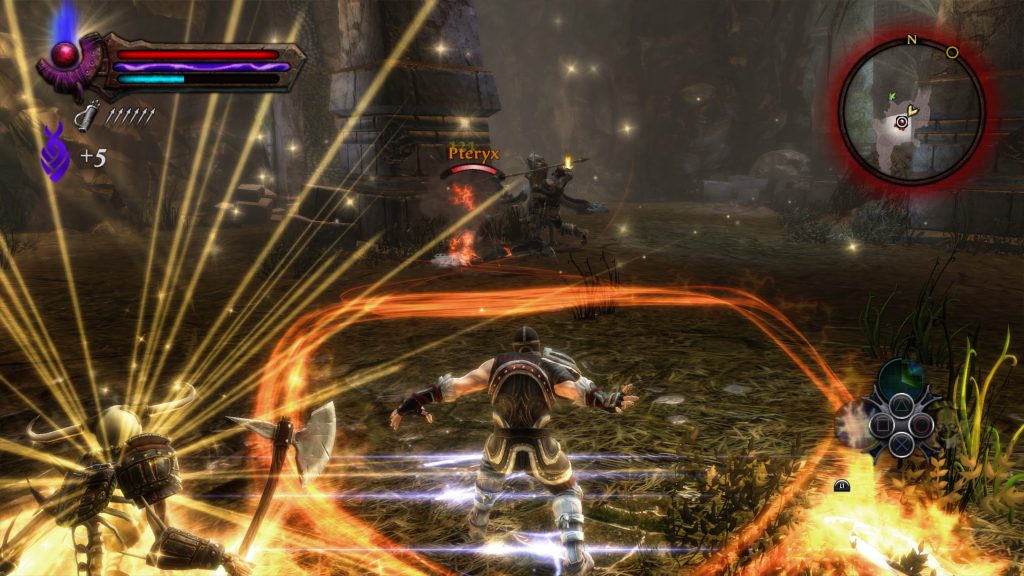 That said, even back when it was originally released, Amalur wasn’t a technical marvel when it came to the visuals.  The character models had that clunkiness to them that the Saints Row games have where hairstyles seem to be plastic moulds stuck onto faces that look like they’ve been punched a lot and it’s not a super hi-res, million frames per second visual feast.  But it does all look good enough for sure and some of the areas you visit are beautifully designed, even if they aren’t as sharp as you might hope.

The game’s soundtrack, as produced by Rare veteran Grant Kirkhope, is epic and ambitious but it does clearly draw maybe a bit too much inspiration from John Williams’ work on the Star Wars films.  We did appreciate that every bit of dialogue in the game is recorded with voice actors and while the acting quality is pretty variable, it does help add a sense of importance to all of those side quests. 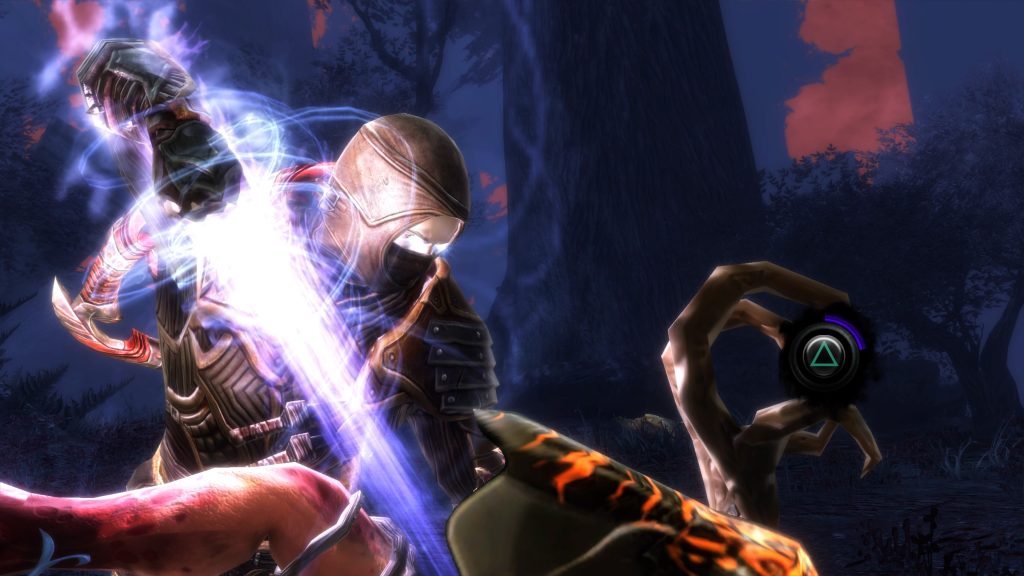 Disappointingly, the game is prone to some technical problems.  This is par for the course when it comes to large RPGs, especially the Elder Scrolls games, but we did suffer from a handful of crashes along our journey and we did have one quest bug out completely, meaning we had to reload a previous save, losing about an hour of progress.  Annoyingly, this bug was present in the previous version of the game, something that is a major pet peeve for us here.

These minor niggles don’t take away too much from what is otherwise still a remarkably fun, playable and deep game.  Even if you suffer from a bit of RPG fatigue, Amalur‘s excellent combat and flexible approach make it a joy to play and it’s sure to satisfy people who do want a long, fully-featured RPG to sink a few days and weeks into.  It may be heresy to even dare suggest it, but eight years later Kingdoms of Amalur is still the best.

Kingdoms of Amalur: Re-Reckoning
9 Overall
Pros
+ Excellent combat
+ Fully-featured RPG aspects
+ Flexible, accessible gameplay
+ A nicely designed and varied open world
Cons
- Not completely solid technically
- The sheer number of side quests is jarring
- Visuals are okay but not stunning
Summary
One of the best RPGs of the previous console generation, Kingdoms of Amalur, is back and as good as ever. Don't let its previous commercial failure fool you, this is a very solid RPG with a ton of story and it has the best combat system in the genre.