We’re not one for end of year lists at PSC. They smack a bit too much of self-indulgence and struggling for copy in print media. In this case though, a long established multi-format UK print magazine tipped us off with a review of this. No doubt we’d likely have missed Kine otherwise. Kine released amid countless other games during the peak of silly season, amid Ultimate Team and Call of Doody. At any rate we, along with everyone else it seems, missed it first time.

At first glance Kine is a fairly unremarkable puzzle platformer. There’s a song on Less Than Jake’s superb album Anthem called “The Science of Selling Yourself Short.” By appearance alone, Kine has that nailed. Along with the by now typical $19.99 PSN indie price tag, the market has all but ignored Kine. Metacritic hasn’t even had enough reviews to give it a score. We understand the dynamics of the market fairly well, heck we’re often the ones contributing a single review, but for the life of us we can’t understand this game being almost entirely overlooked. You see, it’s absolutely lovely. Developer Gwen Frey and her team have done an absolutely stellar job. 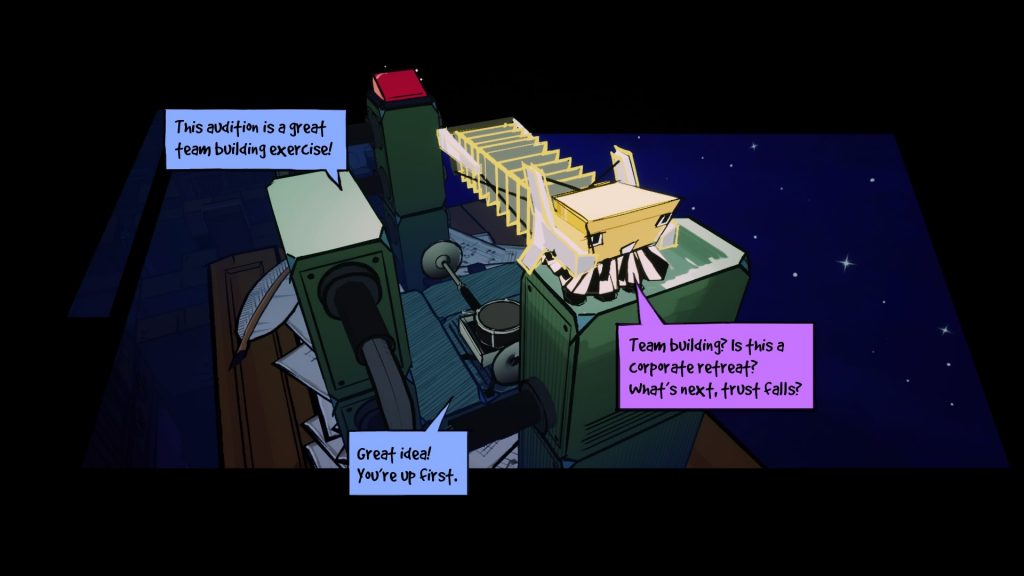 You play as three anthropomorphic instruments Roo the piano, Quat the drummer and Euler the trombone. They’re just trying to get through life like the rest of us are day to day. But the manner in which this story unfolds across some beautifully designed puzzles is sublime. The level furniture is made up of the ephemera of gigging and orchestras. It’s all flight cases, amps and music stands, but laid out in such an intricate fashion that you’ll not initially realise, so fixated are you on traversal.

On their own, the awkward shape of each individual instrument can make traversal of one of the thirteen distinct levels awkward. But combined they make beautiful music both literally and figuratively. To begin with you’ll find yourself struggling on occasional levels, but eventually you’ll twig. Not so much a eureka moment as “god I was making hard work of that”. It helps when you’re helpfully prompted if you’ve worked yourself into a corner to the point of no return. 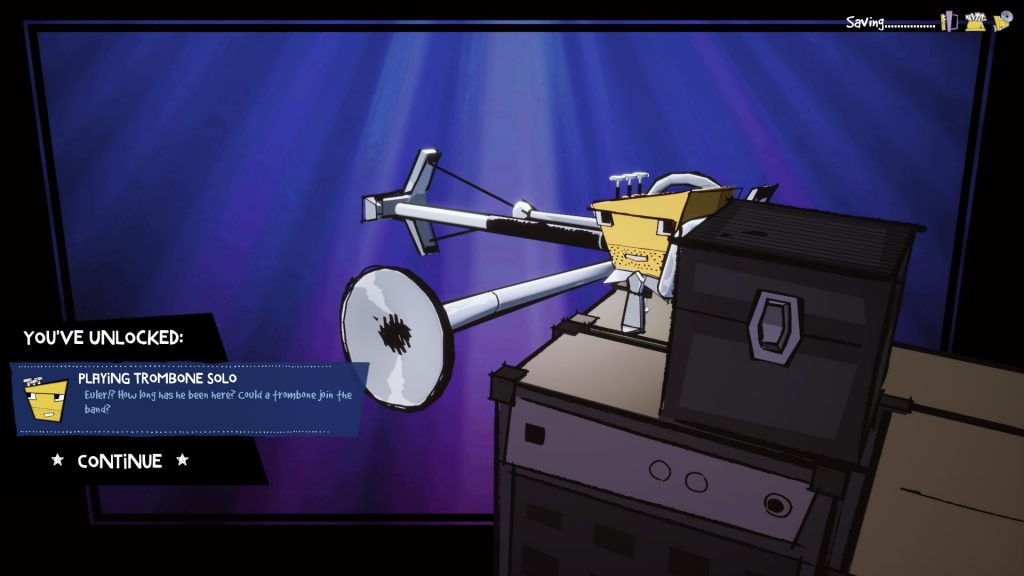 Each of the three instruments has the ability to alter its shape. This allows you to get through gaps you’d otherwise struggle through or in some cases bridge chasms you’d otherwise not get over. In subsequent levels the only way to progress is in conjunction with one of the other instruments. As you alter the shape of each, you’ll hear the respective instrument play a chord. If you rapidly tap  It all adds to the whole feeling of being steeped in a musical world. The final instrument you’ll unlock will be Euler. His method of traversal differs slightly to the others, being a trombone he can alter his shape further by using his trombone slide. This gives him a few extra variables in his arsenal in terms of making his way through the twenty one levels.

All combined with some very clever level design your initial goal is to find your way to the main stage. In addition, the three instruments have their own side quests where they are subject to the same problems that affect the likes of you or I. Like getting a job in fact. It might seem a bit surreal getting a job as an instrument but it all makes sense in context. You can proceed further despite not having completely cleared a level, but you’d be missing out if you bypassed them altogether. Not to mention there being a trophy for 100% completion of all the levels. 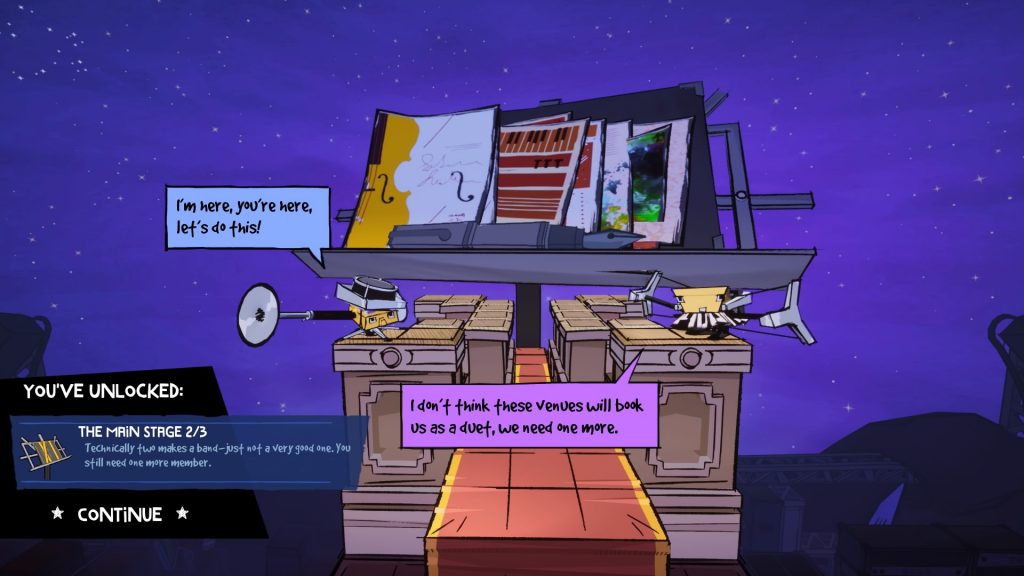 This is all carried out to a delightful jazz backbeat that grows to a crescendo the further into the story you  progress. It very much feels like you’re embarking on a musical journey, however schmaltzy and sentimental that might sound. The interplay between each of the instruments is conveyed by a pithily written script that you’ll often find yourself laughing at as you progress. Once you’ve got to the main stage for all three instruments you’ll have opened up a variety of side quests as well as big gigs in three distinct venues. By completing the three gigs you’ll get the chance of a big break and all being well, a recording contract at the climax of the story. 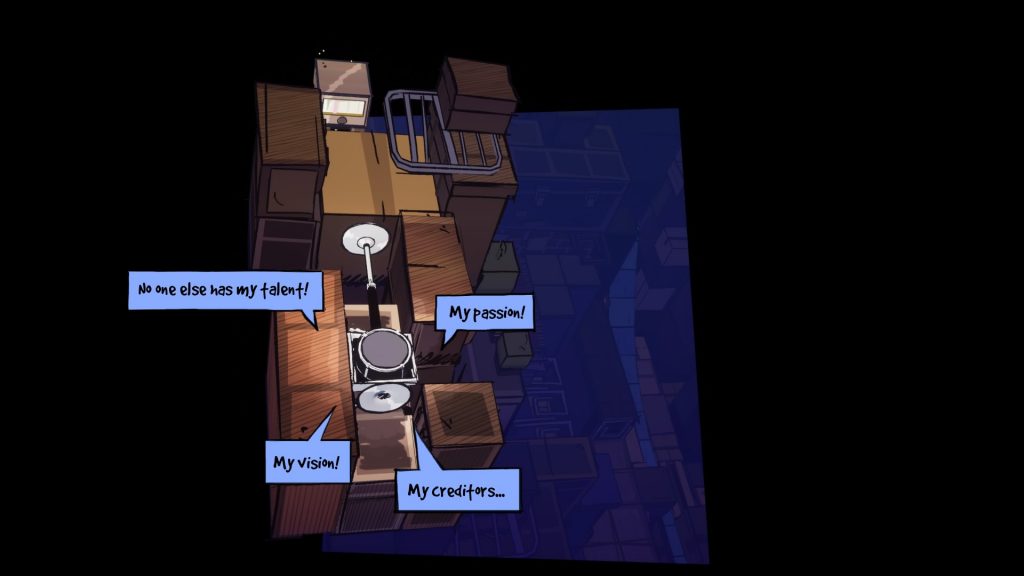 The design of the levels carefully eases you in to stages that grow in complexity, Kine being very much a game you need to play with a clear head, despite the general mood being that of a hazy smoke filled speak-easy where you sip on a whisky on the rocks. If anything, the game is best played in snippets rather than mainlining it.

To continue with the alcohol theme, perhaps treat Kine as a nightcap of sorts once you’re done for the day. The relaxed feeling pervades throughout to give a wonderfully chilled feeling. If we have any criticism, it is that some levels just seem too hard at the outset. But come back later and you’ll be rewarded for your restraint in holding back a little. You don’t need to hurry through; a considered approach is what’s needed.

In conclusion, Kine is the best game of 2019 you’ll probably never play. Do yourself a favour and pick it up pronto. If we did annual top ten lists, this would be up there without a doubt.

Kine
9 Overall
Pros
+ Great story
+ Well thought out levels using the shapes of instruments
+ Fantastic audio design. If you dig jazz
Cons
- The very definition of a slow burner
- Maybe a little on the expensive side for the casual purchaser
- Some levels can be very hard to begin with
Summary
Kine is a fantastic musically themed narrative based puzzler. Very good indeed. You need to play this.