In a rare departure from their main publishing focus, doyennes of the hidden object game Artifex Mundi, bring us an inhouse production in Irony Curtain: From Matryoshka With Love. That being a point and click adventure in the grand tradition of classic genre staples such as Monkey Island, Grim Fandango and countless other LucasArts and Sierra titles.

In a self proclaimed satire of early fifties McCarthy-era US paranoia, you play as Evan Kovolsky. Seemingly the only person oblivious to the fact his parents are in fact Matryoshkan deep sleeper agents, he thinks his obsession with the Matryoshkan regime and all its workings is entirely normal as it’s all he’s ever known. 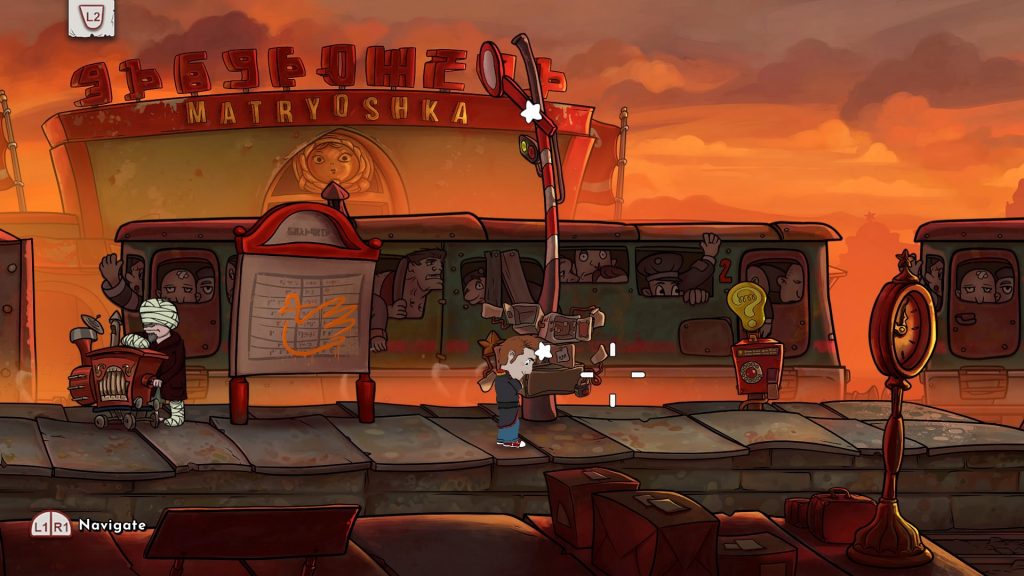 An initial 8.2 Gb download highlights the fact that Irony Curtain is fully voiced throughout. It’s clear this is where the bulk of the assets lay as the animation in cutscenes is fair at best, bringing to mind Archer et al. Only without the lead protagonist being entirely inept and a sex pest with it. He’s just daft.

Irony Curtain frames the events of the game as a flashback, beginning as it does with a prologue of sorts on a Matryoshkan railway platform. After an introduction to the game’s mechanics, including a primer on the in-game hint system you’re thrown back into the main timeline with a “24 hours later” segue where you find yourself back in America.

In his capacity as an academic Evan appears on a TV show to espouse the virtues of Communist society, but merely becomes the target for an audience well prepared with rotten tomatoes to throw his way. Upon completing his not entirely well received missive, he’s contacted by the object of his desire, a Matryoshkan secret agent named Anna. 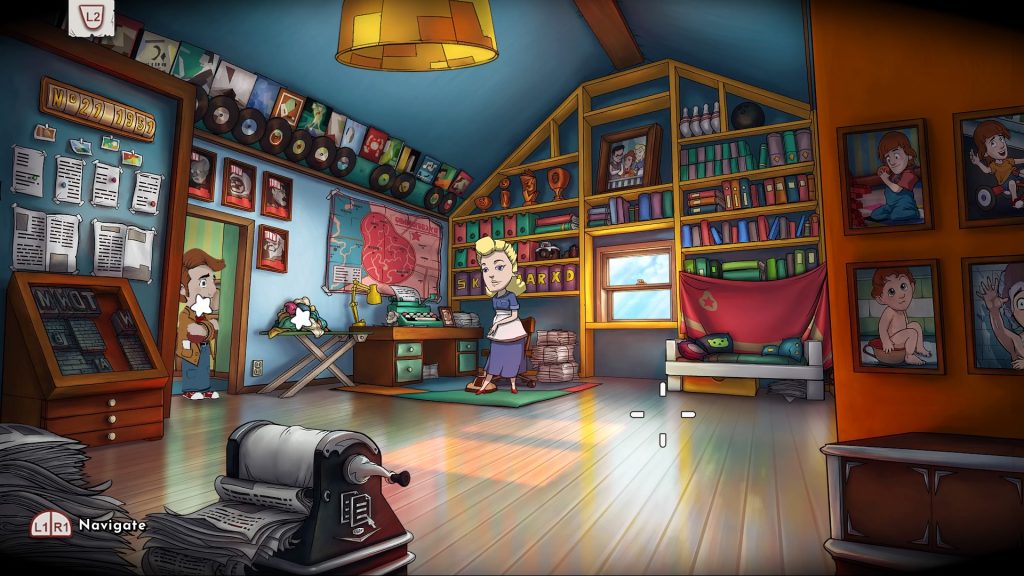 So begins a chain of events where you end up escaping the clutches of the spooks that descend upon your family home and end up on a plane to Matryoshka itself. We really struggled with the pacing of this section, reminiscent of Batman Returns in that we actually fell asleep playing it just as we nodded off watching Michael Keaton’s second excursion as the caped crusader.

The solution to one particular conundrum that led to a conclusion of the first act was there in plain sight all along, so sometimes the most obvious answer is just that.

Thankfully things soon pick up once you arrive at the palatial hotel you spend the second act in, in terms of pacing, puzzles and general interaction with the denizens that inhabit it. 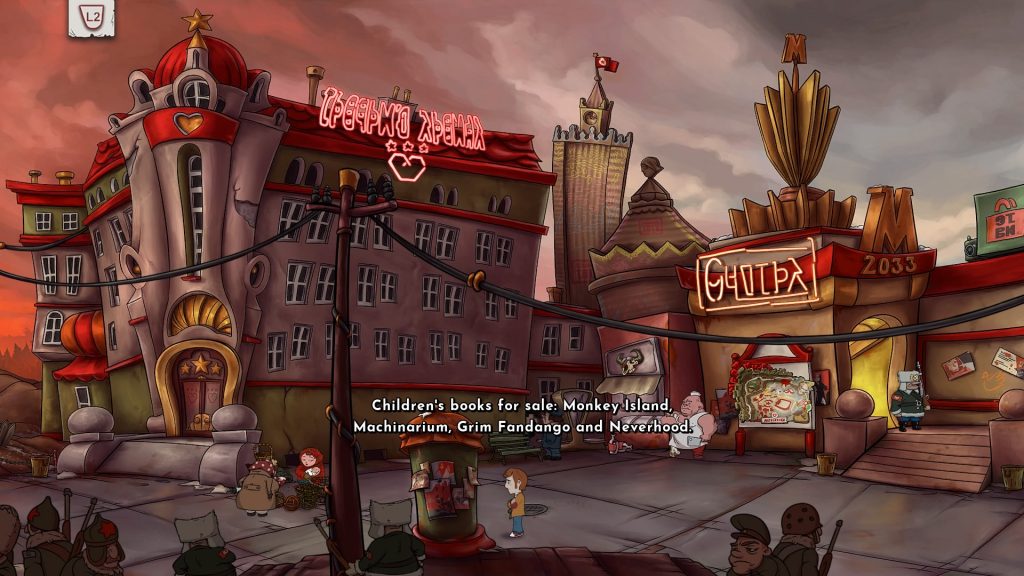 Shout-outs to other games are many and varied, from the obvious LucasArts influences to the likes of the Fallout series and the open goal of the Metro games. After a while though, it starts to get a bit much. One reference to bottle caps as a currency being a prime example. Along with your protagonist Evan’s lame attempts at gags Irony Curtain often falls into the comedy equivalent of zany faceplants and wacky glasses in the Lego games from Traveller’s Tales. 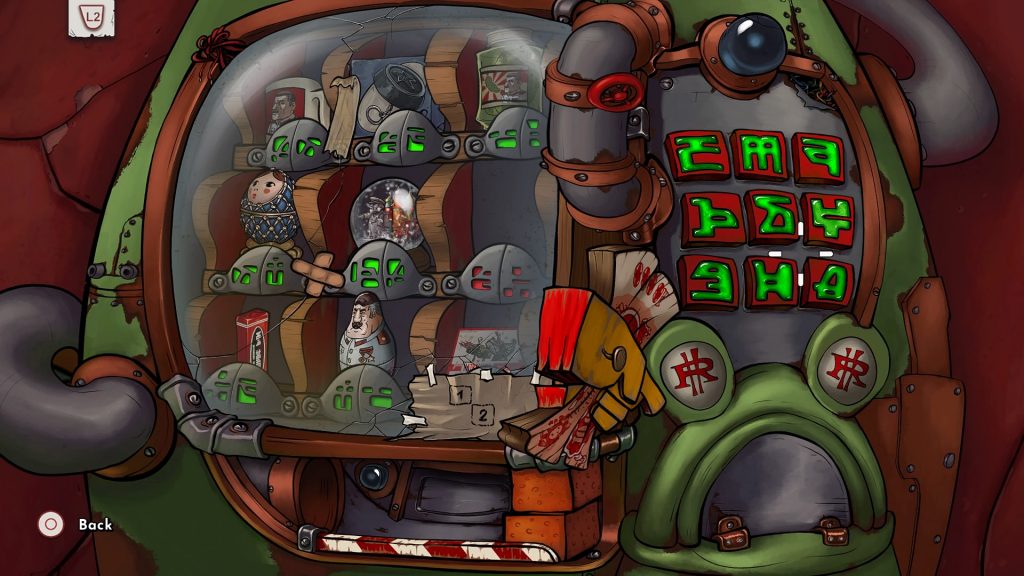 One particular quest chain had us boggling at the sheer length of it. Let us just say that to get a crate of vodka for a character to help us we had to get half a dozen other objects in order by fulfilling quite particular quest states, all the while trying to do so under the close attention of our government minder. The first item we needed to get was a hoofprint, or so we thought.

This particular quest was a little maddening. Getting the prerequisites done and mixing up cement to get an impression was just a trigger for another event as we ended up getting the hoofprint by alternative means. 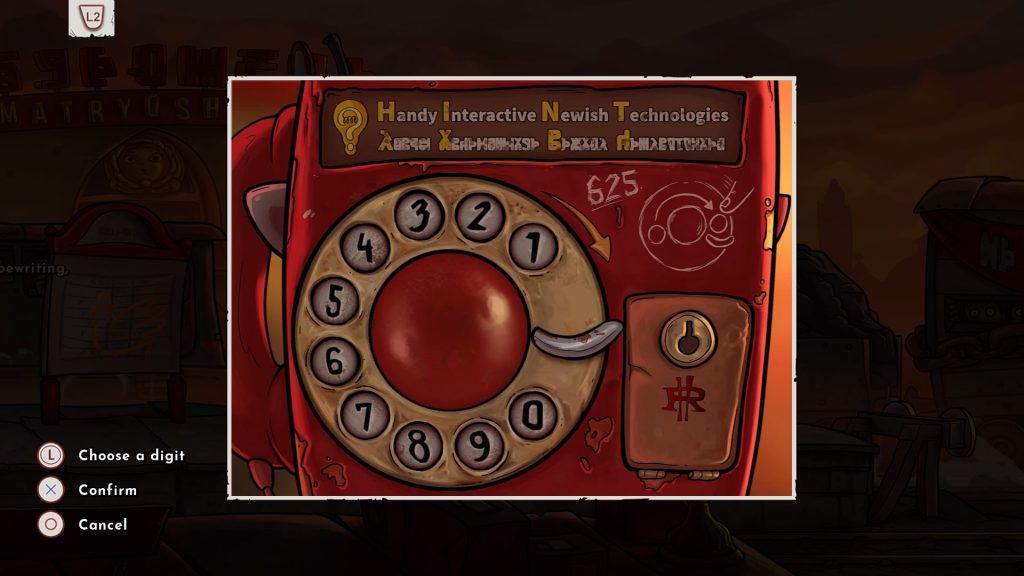 We mentioned the ingame hint system earlier. The devs obviously realise some of the puzzles require something of a leap of logic to come up with a solution, so they included a hint system you can use without penalty. You won’t have to use it too often, but occasionally it comes in very handy. It gives you broad hints in a general direction rather than an outright solution though.

We really struggled with several puzzles despite already having figured out what we needed to do. This happens more frequently than we’d like, to the point that we didn’t find ourselves enjoying ourselves all that much. 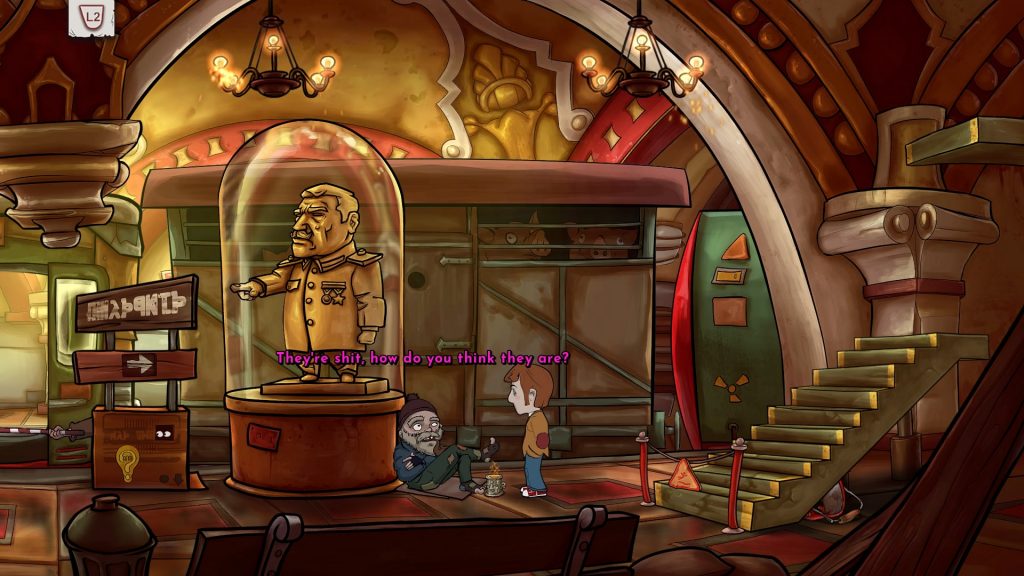 Ultimately Irony Curtain: From Matryoshka with Love means well, but falls down a little in execution. It’s the bloke at the office that trys too hard to drop a gag into a conversation, it’s the risque secret Santa present that gets a wry smile at best. The voice acting is well done, just as the sense of place is good. But otherwise we came away feeling a little unfulfilled and empty.

Irony Curtain: From Matryoshka with Love
6 Overall
Pros
+ Voice acting is consisently high quality
+ Self aware that puzzles can be a bit obscure, there's an in-game hint system
+ None of the gadgets feel anachronistic
Cons
- Tries a bit too hard to be funny. Don't be that zany guy
- Can be incredibly slow paced at times
- Some puzzles are so drawn out as to be absurd
- True to its influences, some puzzle solutions are plain daft

Summary
Irony Curtain: From Matryoshka with Love is a well produced point and click adventure that wears its influences in plain sight, but somehow comes up short of its lofty predecessors. Perhaps nostalgia simply aint what it used to be.