Not that you need to care about it but I’ve said before that Space Invaders is a game that I never liked but have liked many games inspired by it and that trend is continuing with Horizon Shift ’81, a clever take on the original that brings in elements of games such as Galaga, Moon Cresta and Galaxian.  The game is the creation of UK devs, Flump Studios, or rather the one man behind that name, Paul Marrable.

Like Space Invaders, this is a game where you shoot vertically at waves of aliens on a single screen.  The aliens have the mobility of the foes you’d get in the other games I mentioned above too and so you’ll need to move left and right in order to avoid them and the firepower they spit at you.  So far, so normal.  The twist is in the title.  Most levels have a horizontal line in the middle of the play area and enemies will approach from above and below.  Your basic movement is left and right, yes, but you can also press up and down to face in those directions.  Essentially you are defending two fronts. 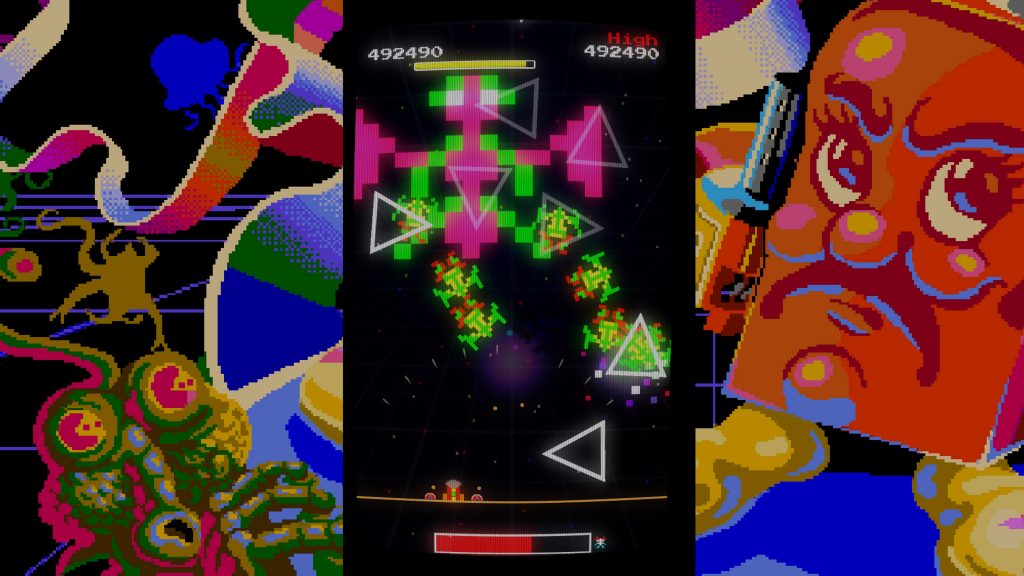 It’s an idea that sounds kind of faffy on paper but it works well here and adds a sense of chaos to the proceedings and demands a little bit of extra skill and awareness from you if you want to survive the swoops and shots from the alien bastards that you’re trying to hold off.

A tutorial explains the basics including the fact that you’ve got a jump which is initially very easy to forget about until a pair of enemies start showing up regularly who fire spikes at you from the side.  This is when the true chaos of Horizon Shift ’81 is really revealed as you avoid threats from up, down, left and right while trying to clear the play area of enemies.  Even on ‘Easy’ the game still presents a substantial challenge. 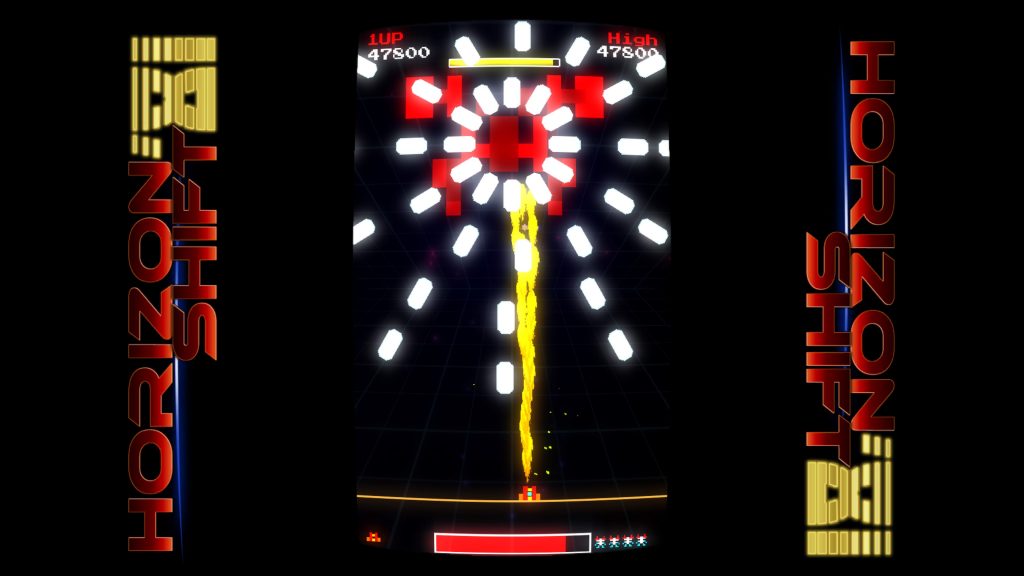 Thankfully you get a checkpoint after every fifth stage and after each boss battle.  You have three lives only which means by the time you get close to the next checkpoint you are usually hanging on for dear life and we had some of our best ‘in the zone’ moments in years as we navigated our way to the next one.  After each checkpoint you then get a boss battle (which also has a checkpoint after it).  These generally involve a larger enemy firing out bullet patterns at you and while they look pretty fearsome, they are actually surprisingly easy.  So much so that we nailed the game’s boss rush mode on our first go.

In our barely qualified opinion, shoot ’em ups are only as good as the firepower they give you which is why games like Gradius, R-Type and all those lovely Cave shooters are so popular and thankfully Horizon Shift ’81 has a very good power up game.  As you blast through the game, icons drop down that bestow new weapons on the player.  Most of these good such as the powerful Flamethrower, the slow-but-homing Rocket Launcher and the screen filling Blaster but even the weaker weapons won’t leave you feeling like you accidentally picked up a pea-shooter.  You can also pick up turrets, a satellite drone and a shield but these are lost if you lose a life and so you’ll need to be careful if you want to go into the next level with your best possible arsenal at hand. 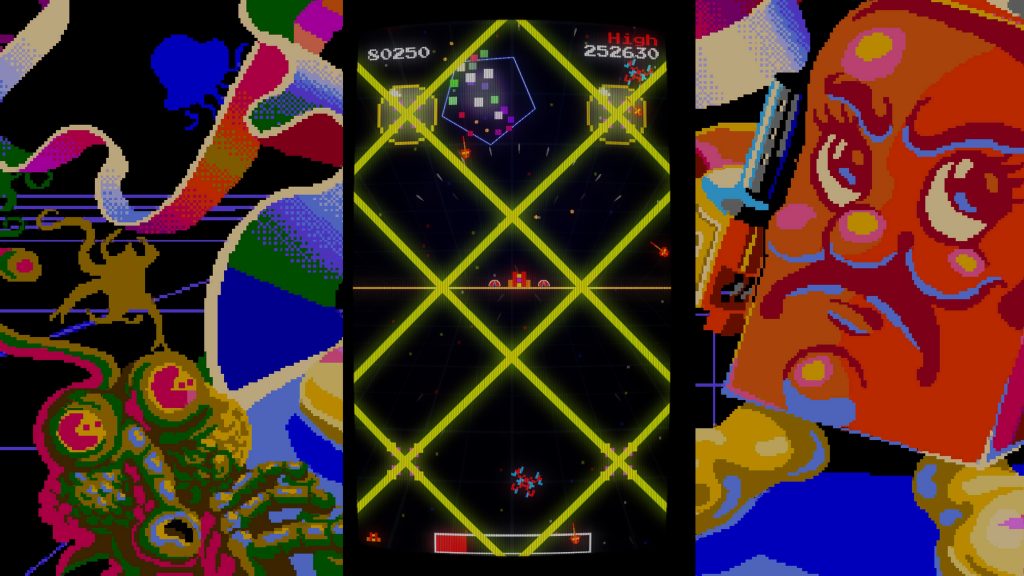 To round off your offensive abilities, you also have a dash move which is mapped to the triggers/shoulder buttons.  This move lets you dodge quickly but will also take out any enemies that are in your way.  It gives you a few frames of invincibility but it does take a second to cool down so you can’t just chain your way through the game.  As with any good shooter, there is a risk vs. reward scoring system and here the big points come from combo-ing enemies with your dash.  While reviewing the game we were more interested in survival and progression but it is good to have that additional depth for when it is time to start boosting our score a bit.

Horizon Shift ’81 is one of those clever games where it feels like it has come right out of the classic coin-op era but is a version of that type of game that they probably couldn’t have managed back then.  It’s authentic but better (for want of a better word) and that’s all you can really ask from an old school game. 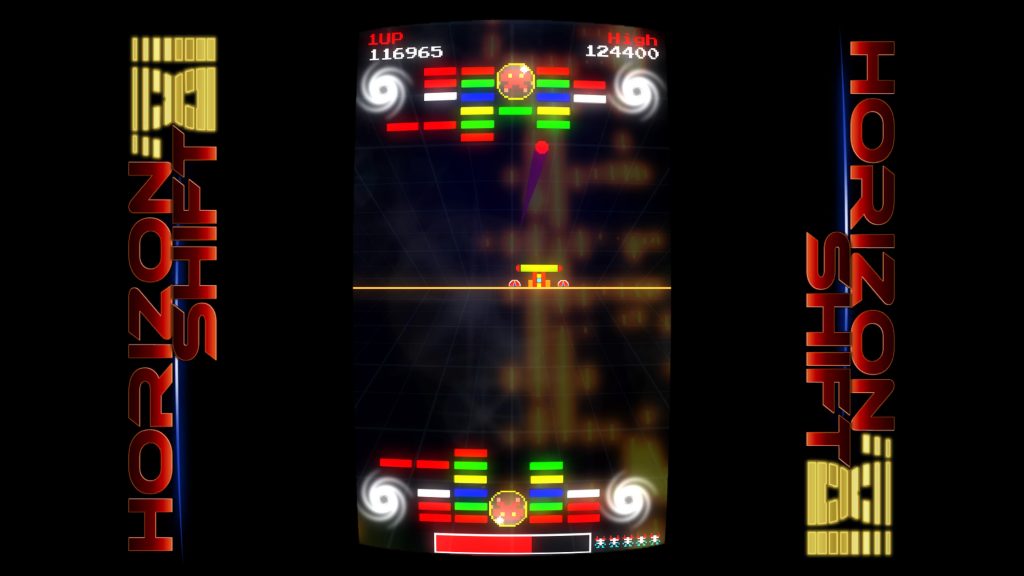 In keeping with that, the aesthetics of the game are what you’d expect but well handled all the same.  The game sports those typical early ’80s pixel sprite graphics but completes the effect by adding arcade style scanlines, some fake monitor glow and even curves the action slightly to mimic a CRT monitor.  There are even bezels on the side to give you that arcade emulation feel too.

The sound is much more modern though.  Well, not the sound effects which are the the sort of arcade blips, blops and crunches that you’d expect from a game like this but it does also have a banging synthwave soundtrack from Flump Studios collaborator Jason Heine.  This combines nicely with the retro aesthetic to almost give you that feeling of being in an ’80s arcade hearing the music pumping over the speakers to drown out the cacophony of arcade sound effects.  We like it.

While we are definitely a little tired of the whole retro indie thing, our love of good shoot ’em ups means that we’ve got a lot of time for Horizon Shift ’81 and can see it being a game that we’ll return to for a quick blast time and time again.  It will have a very specific audience but if you like old arcade games and shoot ’em ups in general, this is well worth your time.

Horizon Shift '81
8 Overall
Pros
+ Challenging but not overly so
+ Authentic aesthetics
+ Good power ups
+ Addictive
+ Has a unique spin on the genre
Cons
- Boss battles are a bit easy
- If you're done with the whole retro thing, this isn't for you
Summary
It might be hard to sell the idea of a two-way Space Invaders clone in 2019 but Horizon Shift '81 offers some great shoot 'em up action and is easy to recommend.