I Hate Running Backwards is an endless runner/shoot ’em up from Croatian coders Binx Interactive and was formed around an idea or rather just a quote.  “I hate running backwards” was uttered by Serious Sam in the game of the same name.  Now I played Serious Sam back on the PC when it first came out (long before the console ports last generation) and it was a truly splendid thing.  Each level was insane craziness with each boss eventually becoming a run of the mill enemy before eventually you faced off against gigantic titans that seemed impossible to generate on my run of the mill gaming PC back then.

The key to that game was indeed running backwards to give yourself more time to take out the rapidly advancing enemies and I Hate Running Backwards takes that strategy and runs, endlessly, with it.  Essentially a vertically-scrolling shooter, this game is unusual in that you are at the top of the screen running away while enemies attack from the bottom of the screen.  It is unusual but it works well enough. 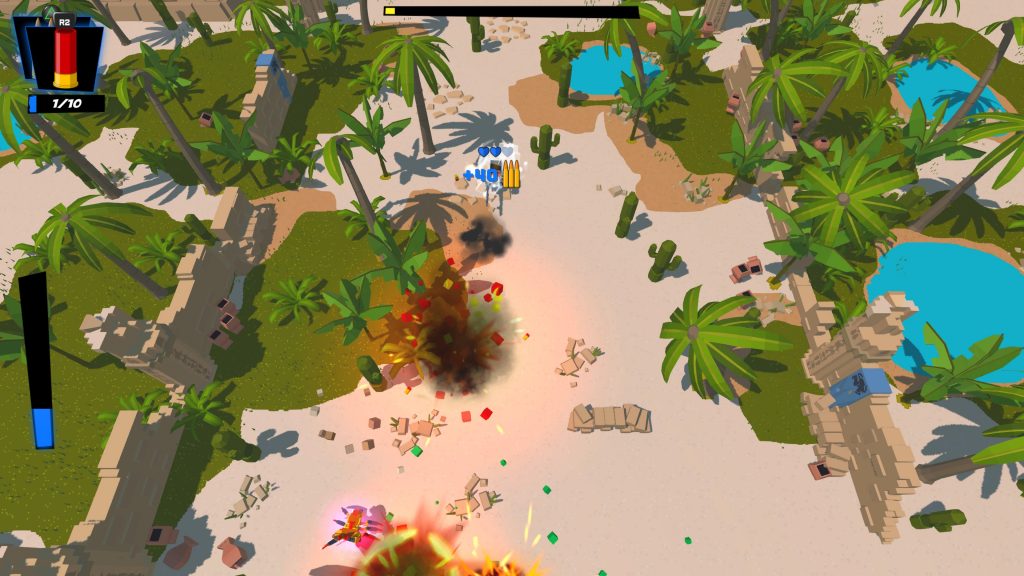 You start with a basic weapon but can pick up ammo boxes to fill your rifle or shotgun both of which you can switch between.  You fire with

and you only fire directly downwards, no aiming with the right stick.  You can also pick up special weapons (fired with

) such as rockets, lasers, flamethrowers and mines and these have limited ammo and should be used sparingly.  A handy spinning melee attack is available when enemies get too close but this has a short cooldown to consider.

What makes the game really stand out is the fact that the levels are all built out of destructible voxels.  It gives the game a blocky Crossy Road look but that’s fine if it allows this sort of destruction.  Destroying scenery also has the benefit of earning gold for you.  If you max your gold meter out you’ll earn a choice from three perks giving you more health, better firepower or some other buff.  A screen clearing special attack also charges up as you play. 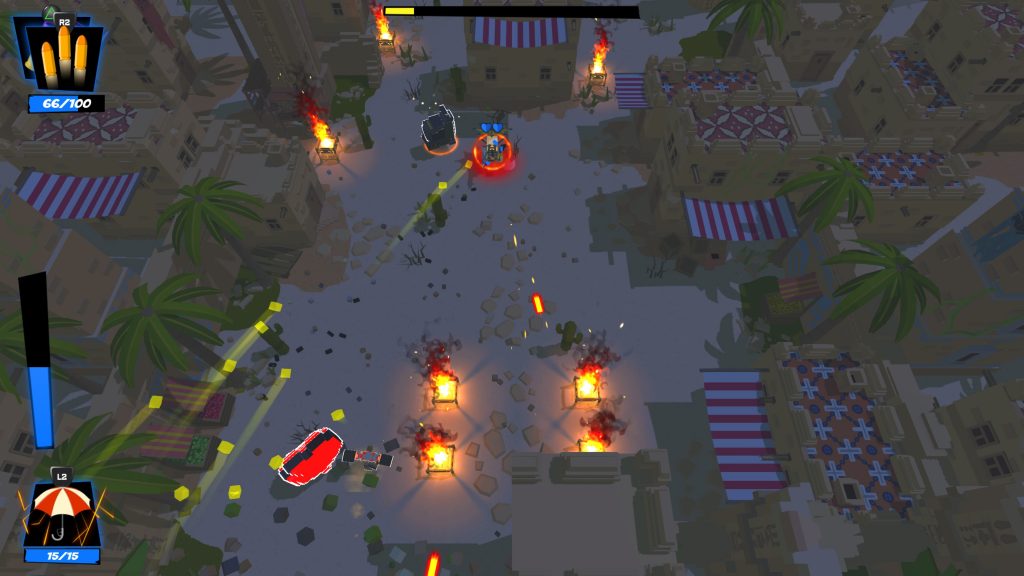 That’s pretty much it for the basic gameplay.  As you play you’ll find new special weapons that will then be added to the rotation to be found in later sessions much like many rogue-likes on the market and you’ll unlock other characters from the Serious Sam universe to play as, all of whom balance speed, health and firepower in different ways to marginally change your playing style.

Initially the game is a little unusual and that initial feeling of gunning down fast enemies with your weedy first gun isn’t the most satisfying but where the game suffers is that it never makes you all powerful.  Unlike this week’s other shooter, Riddled Corpses EX, which has you ultimately levelling up into a nice, powerful character.  Also, the procedurally-generated level layouts lack character and given that there are no checkpoints, it gets pretty old pretty quickly when you have to keep going back to the start.  I wouldn’t mind but you don’t get that rogue-lite thing of feeling like you are levelling up either and so it starts to feel like a major struggle when you get to a new boss who slaps you right back to level one. 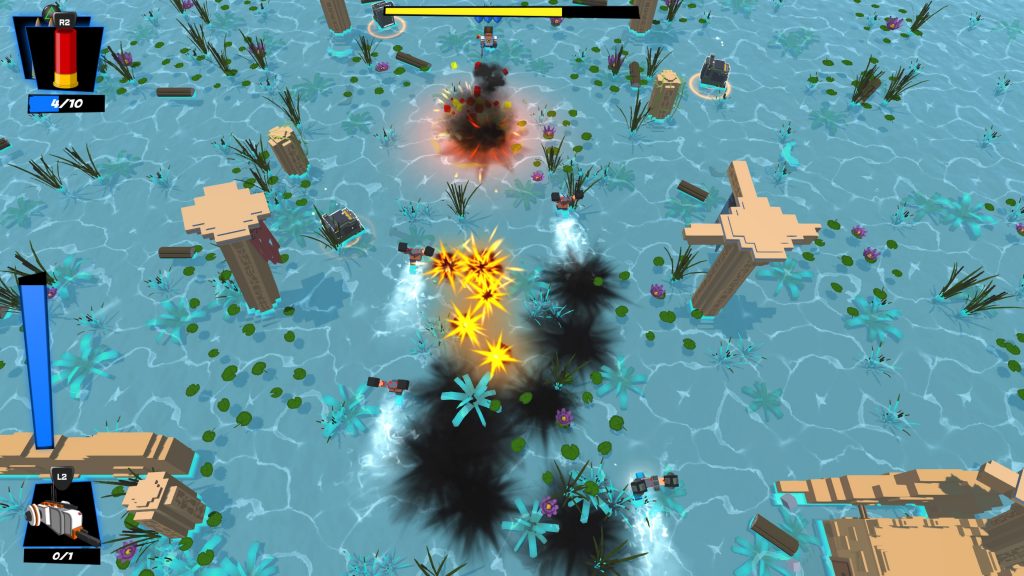 So at first I really didn’t like the game but I persisted and it did grow on me.  The madness of it combined with the skill it takes to progress gives it some character to make it stand out and when you do make progress it does feel quite satisfying.  It’s a shame that the game is more interested in adding curses that modify the game to make it harder, than rewarding you for doing well.  The perks feel pretty minor and take ages to earn (and are lost when you get to the game over screen) and the special weapons are quite a small part of the game, and again don’t feel all that significant.

In the end you’re left with a game that does the shooting stuff competently but sort of botches the rogue-like aspects a bit which means the game has some good pick up and play gameplay but struggles to foster any kind of addictiveness.  This is also due to the game’s wildly varying difficulty, a product of the randomness of the levels, which can see some runs being devoid of decent of ammo pick ups but full of enemies or vice versa. 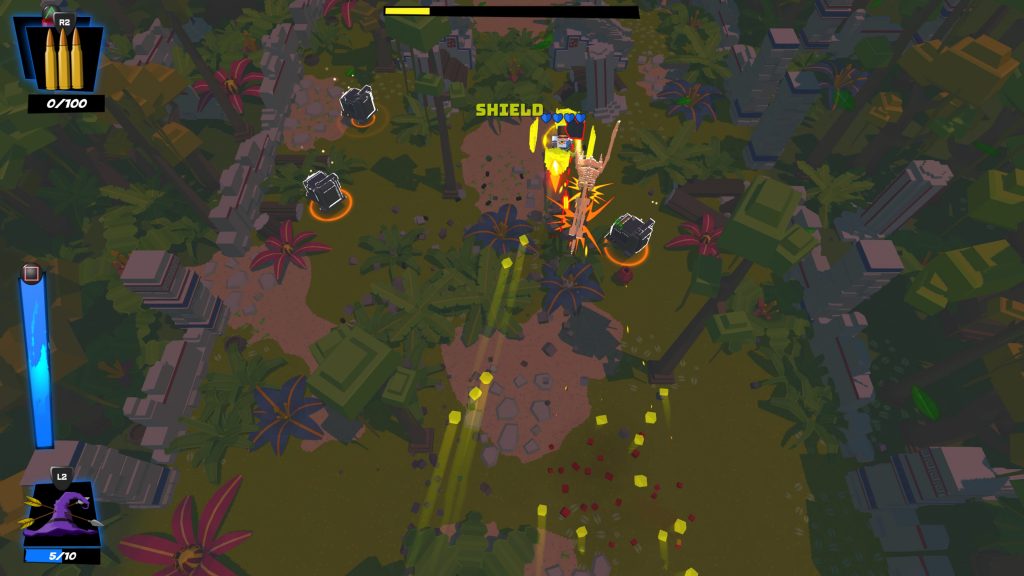 Visually the game’s clunky style works but never wows but the sound is fairly bombastic with lots of screaming enemies, gunfire and occasional special effects.  As I said before, this does allow for a lot more destruction though and we do appreciate that, even if the actual scenery is just a generic Ancient Egypt them mostly full of empty space.  That said, the game does at least occasionally mix it up with vehicle sections but it’s not really enough to make the game feel special in any way.

It’s hard to give this game a big recommendation, especially when there are much better shooters out there and £12 is probably a tad too much for a game like this but hardcore shooter fans who want something a little different (such as not being a twin-stick shooter or a bullet-hell one) may get a lot out of this.  However, punters looking for something polished and fun, they might want to give this a swerve.

I Hate Running Backwards
5 Overall
Pros
+ Solid action
+ Quite original
+ Lots of destruction
Cons
- Rogue mechanics aren't great
- Inconsistent difficulty
- Can feel like a slog
- Not very addictive
Summary
An interesting take on the usual arcade shoot 'em up but ultimately one that isn't as satisfying or rewarding as it should be.