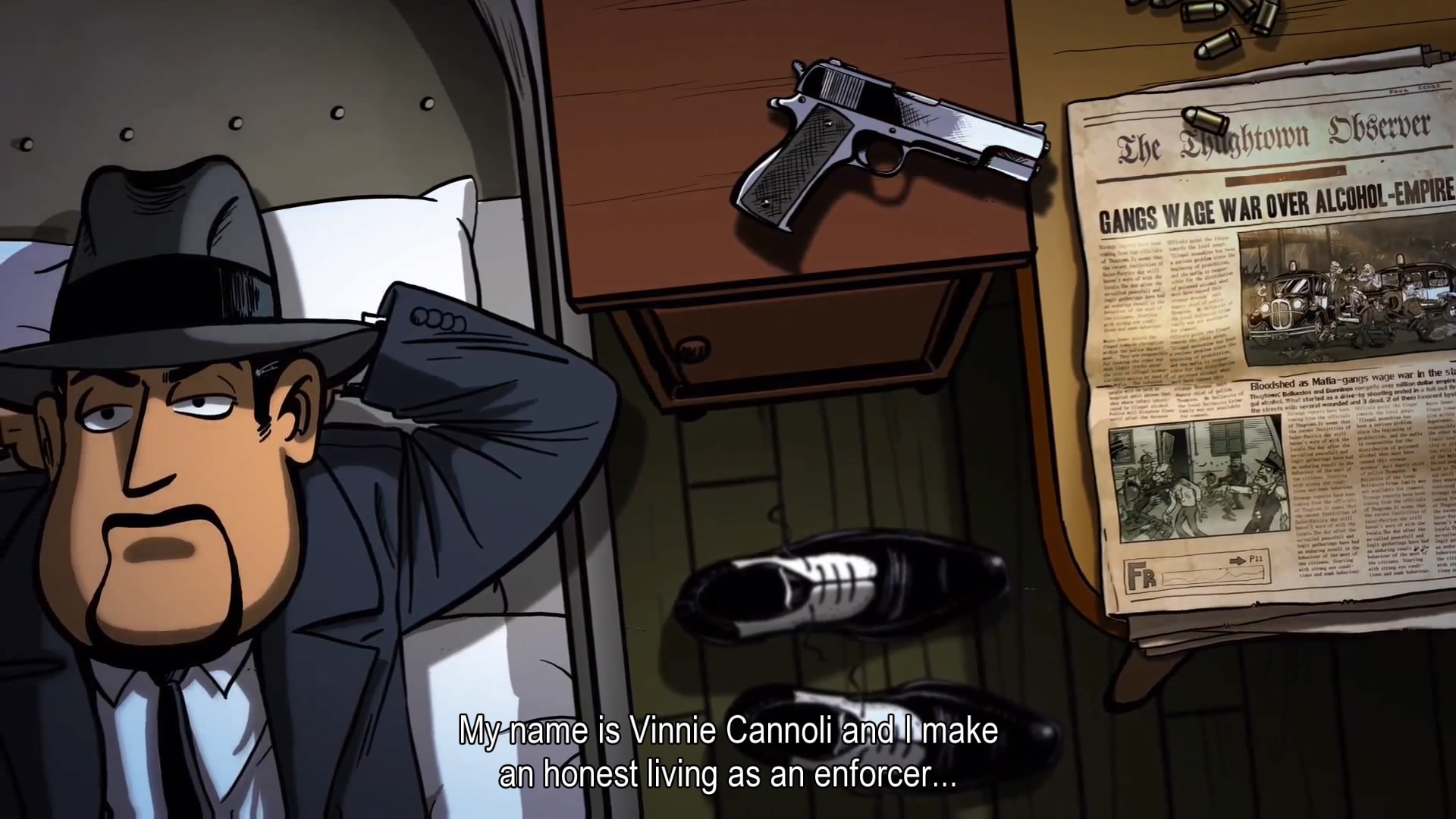 Guns, Gore & Cannoli by Crazy Monkey Studios has been released on multiple formats throughout the year and now has landed on PS4. This Metal Slug inspired side-scroller puts you in control of Vinnie Cannoli, a wiseguy in the 1920s tasked with rescuing a goodfella that’s gone missing. Unfortunately the whole town has become infested with zombies. 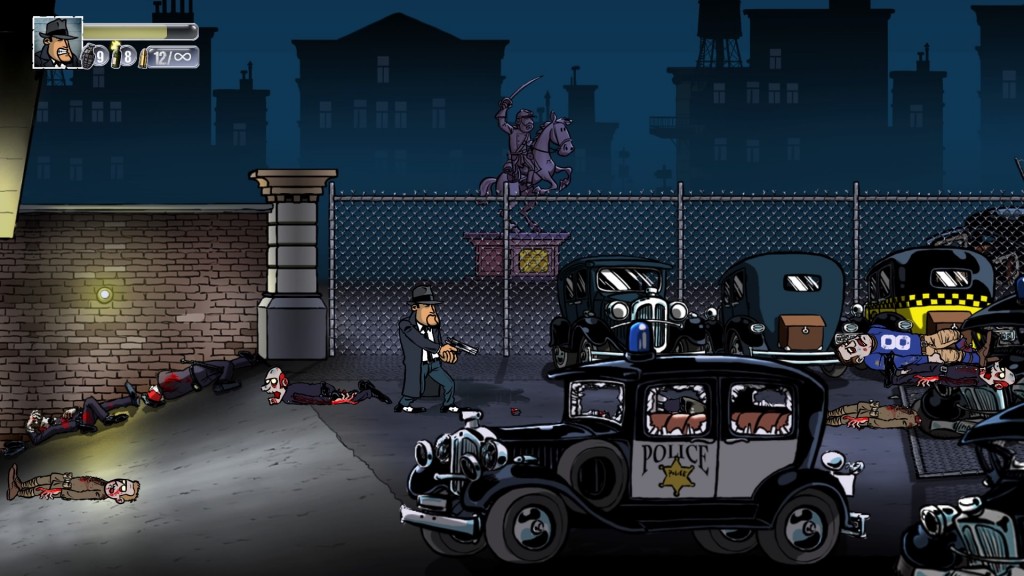 If you’re unaware of Metal Slug it’s an arcade series from SNK where you run from left to right shooting everything in sight using a variety of weapons and grenades. Guns, Gore & Cannoli doesn’t hide the fact that it draws inspiration from these classics (there are even visual references in the levels, and to other games) and certainly on the surface level at least it is very similar. You run from left to right shooting enemies, everything is made of hand drawn sprites, there are multiple weapons and big bosses to fight. There are differences however. Rather than picking up a limited use weapon you hold all your weapons at once (you start with one but end up with nine), barring your infinite ammo pistol all weapons have ammo that needs to be collected, all weapons need to reload, you can kick to give yourself some breathing room, you have a health bar and there are checkpoints throughout the levels which you return to upon death or loading the game.

Very much a modern take on an arcade game and on the whole a very successful one. The basic pistol does the job against most regular enemies but all your other weapons feel suitably different and are effective in different situations. The shotgun will knock back enemies but has a very short range, magnum bullets pierce enemies, the flamethrower is a constant stream of hot death. Unfortunately I found myself sticking to the same weapons more often than not simply because you have to cycle through your weapons, either forwards or backwards, with button presses and it takes too long and is too clumsy to do it on the fly to adapt to a situation. Not game breaking but you’re not going to be switching weapons with ease if things get a little hairy.

There can be a lot of enemies on screen at once and the game holds up well, which is impressive considering the details and animation are very good (the second boss is a highlight), the lip sync in the cutscenes is spot on. The enemy variety is strong as well, with multiple zombie, human and rat types. The music should also get a mention as being very evocative of the period whilst giving a playful slant to a zombie apocalypse. 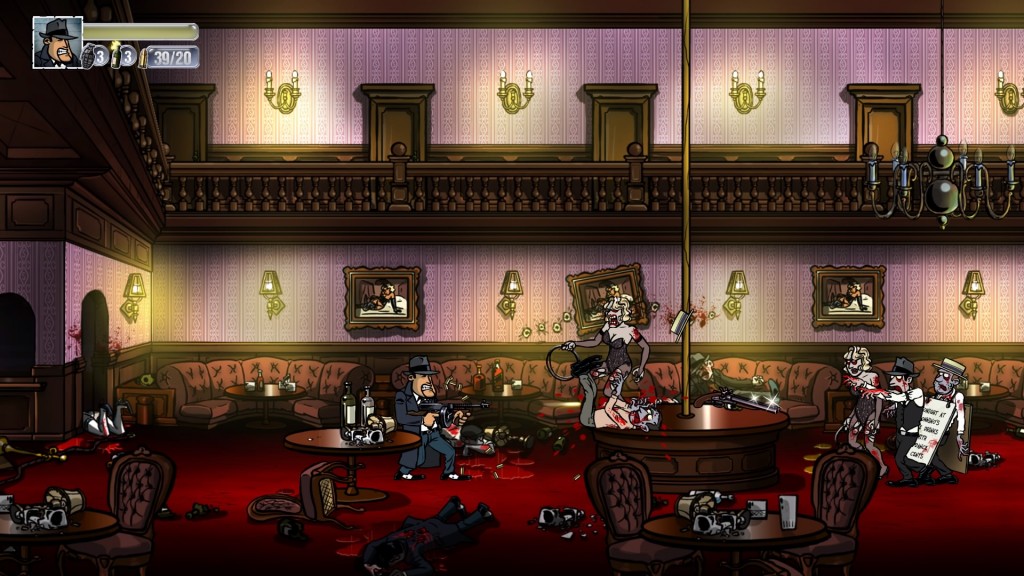 The story is similarly light hearted, with Vinnie making his way through the zombie hoards to find out what’s happening, making friends and enemies along the way. Vinnie’s not short on one liners, both in cutscenes and whilst killing, though the latter do end up repeating quite frequently.

Much like its arcade inspiration Guns, Gore & Cannoli is quite short and can be completed in a few hours assuming you don’t get stuck on any difficulty spikes. The bosses can be quite bad for this and are generally about putting as much damage as you can on them as quickly as possible so as to hopefully take less damage yourself either from the boss or cannon fodder enemies that constantly spawn. There aren’t any patterns to learn and dodge or anything clever like that. The second boss comes closest to this, so is the best, but it is very basic compared to the games it apes.

There is a four player mode for the main story but it’s offline only. It doesn’t change much other than speeding up the pace a little but is fun in a pick up and play way as each individual level is short so you can knock a couple out in no time at all. There is also a separate Versus mode (which the main menu defaults to for some reason) which just has you and three others fight it out in an arena. The others can be made of offline friends or AI and the speed of the game is knocked up a notch to make things a little more frantic. Nothing more than a minor distraction. 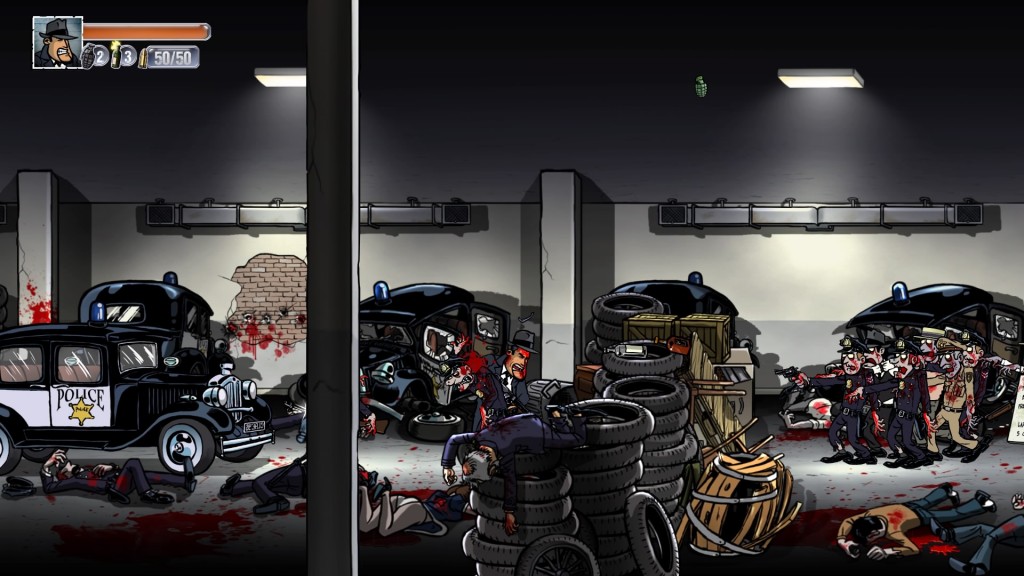 Guns, Gore & Cannoli is a short game, but that just means it doesn’t outstay its welcome. The gameplay is simple enough that if it went on too long it would become tiresome but the devs have got the game length just about right and at a decent price. There are multiple difficulty modes for you to attempt if you’re left wanting more and each level is short enough that I can see myself booting this up every now and again just for a side-scrolling fix.

Guns, Gore & Cannoli
7 Overall
Pros
+ Clear hand drawn graphics
+ Enemy variety
+ Just about the right length
Cons
- Cycling through weapons is awkward
- Some difficulty spikes
Summary
Guns, Gore & Cannoli is a short game, but that just means it doesn't outstay its welcome. The gameplay is simple enough that if it went on too long it would become tiresome but the devs have got the game length just about right and at a decent price. There are multiple difficulty modes for you to attempt if you're left wanting more and each level is short enough that I can see myself booting this up every now and again just for a side-scrolling fix.