Confession time – I have not played the first Guacamelee! title. I always meant to, a critically acclaimed Metroidvania is right up my street but when you’re living the high thrills, jet setting lifestyle of a games reviewer you don’t always get to play the games you would otherwise. I was happy to play the sequel, Guacamelee! 2, for review however and I was not disappointed. 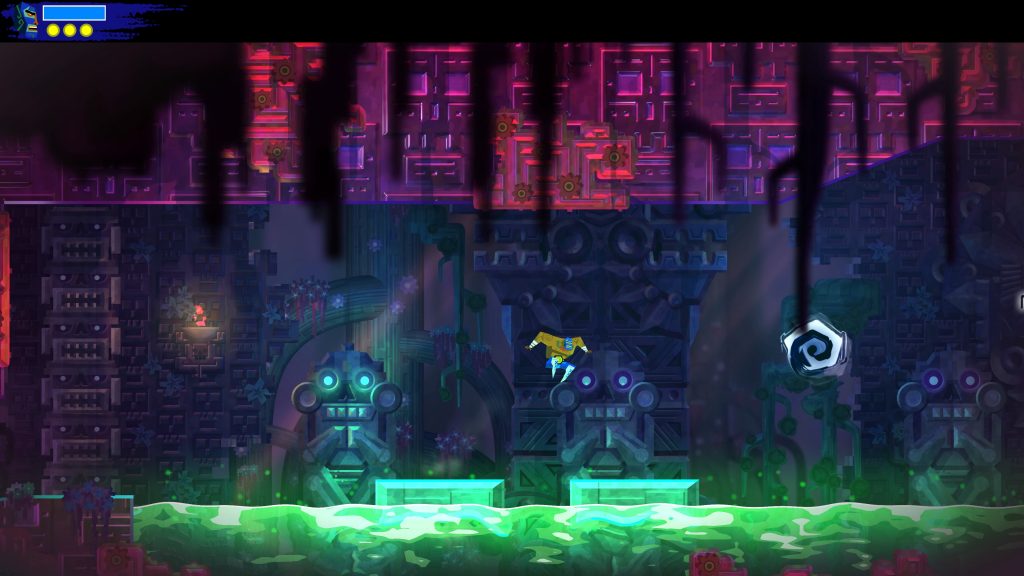 You return as Juan the luchador from the original, but time has been unkind. He has aged and grown both larger, weaker and started a family since his heroic days, but is quickly called back into action. Holes start appearing in the sky and Juan must travel to a different dimension, the Darkest Timeline, in order to save the Mexiverse. Here a different hero saved the day in the first game, but that same hero must be stopped before he destroys all dimensions.

Like the majority of Metroidvania sequels this means that you start from scratch, Juan doesn’t start with his luchador mask and has forgotten all his moves from the first game bar a basic punch/kick combo, a jump and a dodge roll. It does not take long to get your first move, an uppercut that, like all Juan’s special moves, aids him in combat, exploration and platforming.

All special moves are colour coded, the uppercut being red. If you see a red block on the ceiling then you can destroy it with the uppercut to access a new area. Similarly in battle you’ll sometimes encounter enemies with coloured shields around them, a red one can be destroyed with, you guessed it, the uppercut. The uppercut also launches you into the air a bit, meaning if you can’t quite make a jump then an uppercut might just give you the height to make it. 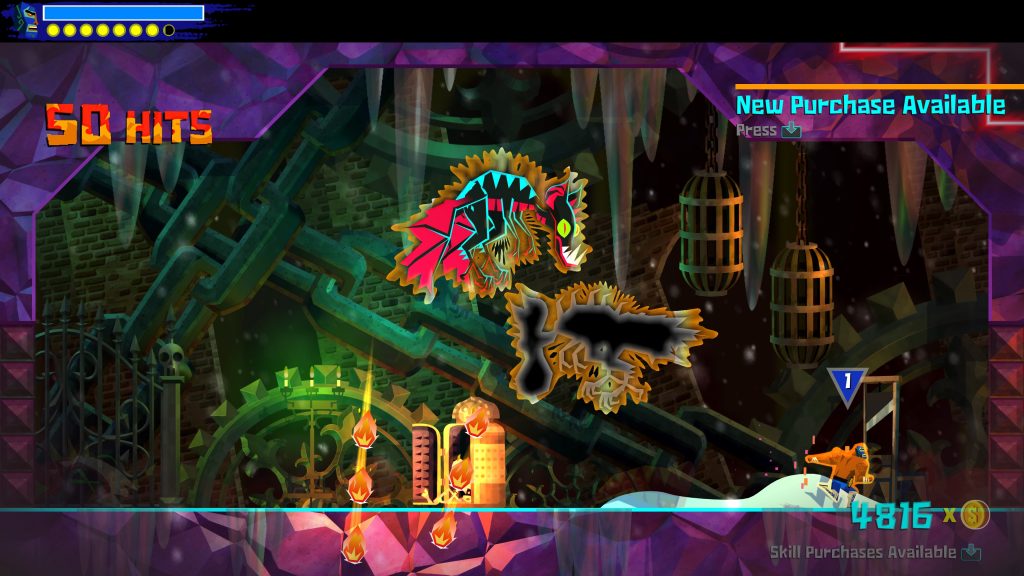 As you explore the levels you’ll see blocks of other colours, so you’ll need to return at a later time once you’ve collected a new ability to find out what’s behind it. It’s what makes a Metroidvania a Metroidvania and Guacamelee! 2 is very generous, showing you any coloured blocks or chests you’ve seen on the map screen, along with a completion percentage for each area allowing you to know exactly where to explore when going for 100% completion. There is a teleport stone in each area to get around quickly, though, perhaps because I’ve been playing Dead Cells recently, I’d have liked a more flexible teleport system. Having to run to the teleporter, then run from the teleporter on the other end to where you want to go can mean repeating platforming sections or obstacles you’ve already completed which isn’t the end of the world but can be a little disheartening.

Beyond the exploring and platforming is the combat. It is quite in depth with an invincible dodge roll which also works in the air and the ability to combo all Juan’s specials to juggle opponents. There is a good variety in enemies, with each having their own forms of attacks requiring a decent amount of adaptation by the player. You will often enter areas and be required to defeat all the enemies before you progress, but these aren’t overly long and even if you die you’ll be checkpointed just before you started the fight. 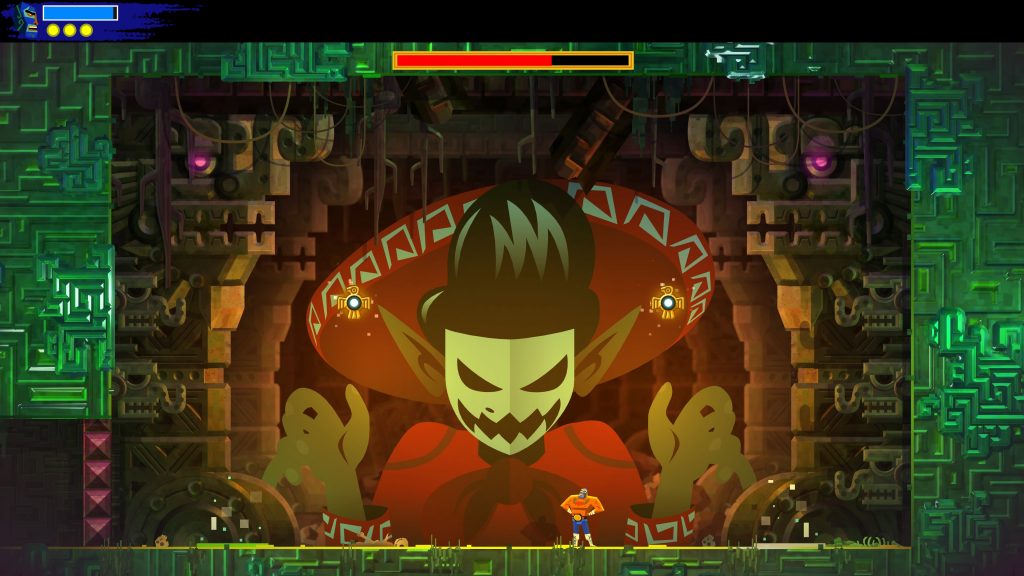 In general Guacamelee! 2 is quite forgiving. If you fall in a pit you’ll respawn at the last platform you stood on and the checkpoints are numerous. In fact the game is very fast moving with very few sticking points. Towards the end there are some tougher battles and platforming sections, otherwise the challenge comes from optional areas. These areas off the beaten path require a mastery of Juan’s abilities that wouldn’t be out of place in games like Super Meat Boy. Again they’re quite generous with checkpoints and each section is relatively short but you’ll be required to combine precision platforming with expert use of all Juan’s abilities. I would sometimes press the wrong button in these sections as each shoulder button does something and you’re moving from one ability to another in quick succession but if you’re into this sort of thing then you’ll enjoy the challenge and if you’re not you can bypass it unless you really want 100% completion.

You may want to visit as many areas as you can though because Guacamelee! 2 has a great sense of humour. As well as Juan’s dimension and the Darkest Timeline the game also has a few other dimensions referencing classic games, there are references in the backgrounds, NPCs with humorous dialogue and even a little section about the internet, to be vague about it. Even the bosses are funny. Very little takes itself seriously and it all fits together with the great 2D artwork, music and Mexican setting to create a charming game that you’ll struggle to stop playing. 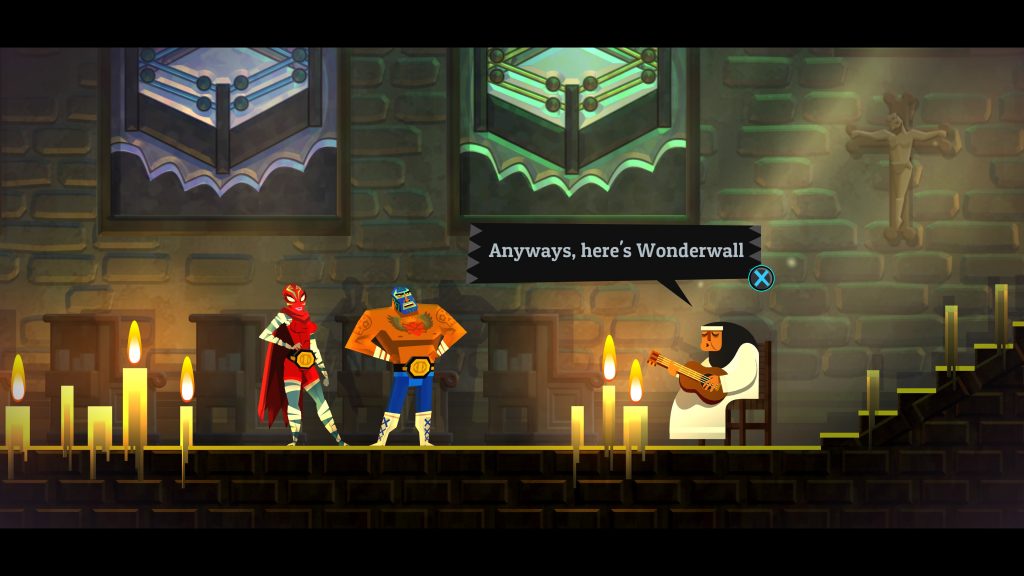 If you so choose you can play in four player co-op but it’s probably better suited to solo play. You can beat it in around eight hours but exploring everything will take a few hours longer and a Hard mode is unlocked upon completion, giving you an excuse to jump straight back in. It certainly doesn’t outstay its welcome, I would have happily played for longer. Luckily for me the original game is there for me to go back to, for others this sequel may seem quite similar but if you enjoyed the original and, like me, are happy to play more of the same then Guacamelee! 2 is a lovingly crafted Metroidvania with a great sense of humour.

Guacamelee! 2
8 Overall
Pros
+ Gameplay flows really well
+ Great sense of humour
+ Fantastic presentation
Cons
- Maybe too similar to the first game
- Might be too easy for some, too difficult for others
- Co-op doesn't really add anything
Summary
Guacamelee! 2 has a great sense of humour and offers a Metroidvania with precision combat and platforming that'll leave you wanting more.