Codemasters are back at it again with another racing title. This time, they’ve delved into their recent past and decided to give GRID something of a reboot. More philosophically arcade, can this jack of all trades become a master? 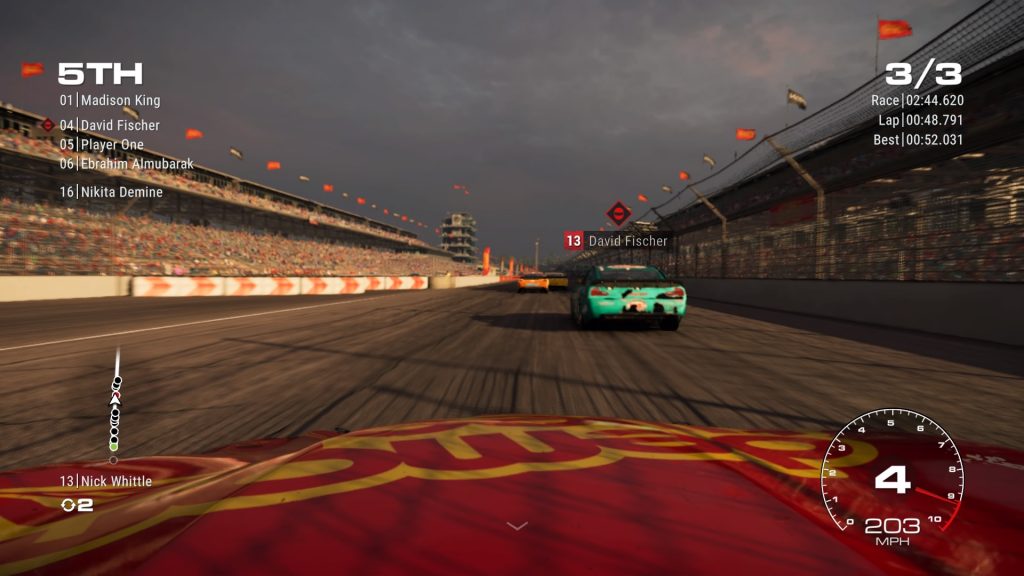 GRID‘s career mode offers the main course with dozens of events split across several racing disciplines. You can willingly bounce between them but the structure tends to emphasis committing to one as beating previous events inevitably unlock new ones. You’ll globe-trot and get behind the wheel of increasingly powerful vehicles, although progression does start to feel a touch repetitive. Success in events lands you money for more vehicles and your skill on the track counts towards your driver level which helps contextualise each action you take on track.

The racing itself feels entertaining, tight and the cars handle well. It leans heavily into the arcade camp with powerslides and drifting being easy enough to accomplish. The experience system does give little moments more weight. There’s a great sense of speed on display and the AI remains competitive and feisty. A new nemesis system has been included which does give your indiscretions some consequence. Hit an opponent too hard and they might look for some payback. Invariably, they often do which makes you some interesting chases. You also have a teammate you can use to give simple instructions. This unfortunately leads to just ordering to attack what’s ahead of them and, if I’m honest, the team side of things is very peripheral. 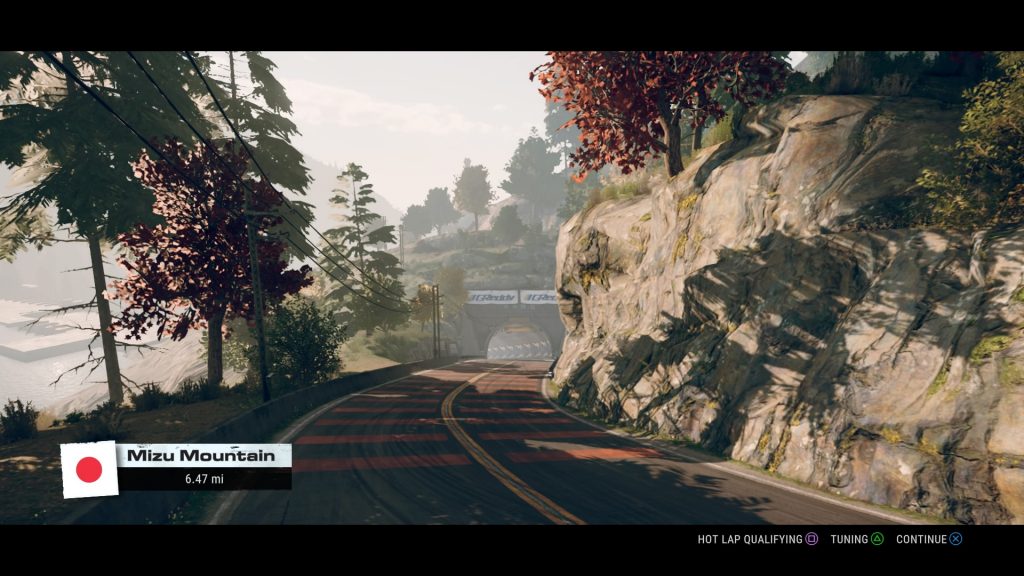 In a sense, the career mode is very half-baked. They wanted the ‘all things to all people’ approach of past titles but there’s an experience here that feels slim, oversimplified and repetitive. Events only come in two offerings with the majority of them being races. Time trials do break the monotony up but these events are so few and far between. It feels needlessly hamstrung, like a game made from scratch rather than building on a franchise.

Winning four showcase events opens up the GRID World Tour which gives each of the racing disciplines a chance to shine. As a challenge, it feels relatively casual on the default medium difficulty setting but you can tweak this to your liking. It’s nice to have a racer you can bang wheels with, even if you’ll tire of the venues and stipulations pretty quickly. 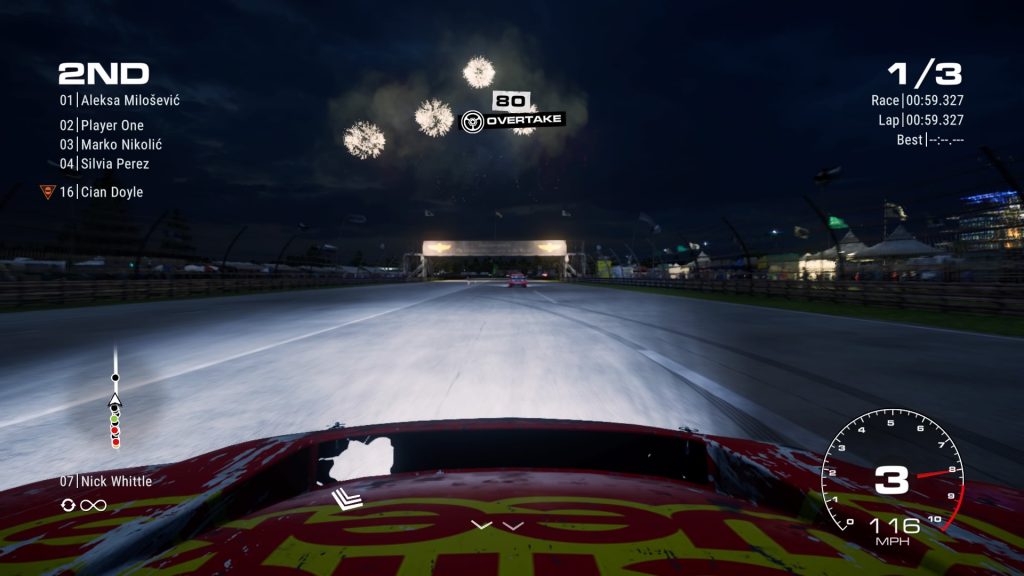 One thing Codemasters have excelled at are visuals. Presentation is slick with races truly feeling like special occasions. There’s a lot of fireworks and confetti that accompany victory and the courses are designed with a real world tour feel in mind. Grandstands are packed with raucous spectators that do flinch when a crash happens near them and you can hear a booming PA system almost anywhere on track. There’s a great atmosphere conveyed here and it compliments the hectic racing.

Damaged parts and loose tires remain on track which gives you something to consider when coming back around and the cars sound exquisite. There’s detail to it with gear changes, misfires and bumps expressed through some top work. There is some real polish in the fundamentals here and it does help keep the action engaging. Weather effects play a big part in that. It’s not changeable or dynamic but races are short enough it probably wouldn’t matter. Taking to a wet track with the sun beaming down does have a great look to it. As always, the car models are brilliantly realised with some heat haze and exhaust flames accompanying their roar.

It’s a shame the track listing is underwhelming. You’ll find yourself taking to the streets of Barcelona, San Francisco and Havana a lot. Whilst reverse and alternative layouts do technically bolster the offering, I miss the variety of older titles. Stock Cars have just a couple of ovals to grace whilst Tuners have just a few mountain runs. It should be a celebration of motorsport but GRID feels more like an appetiser. 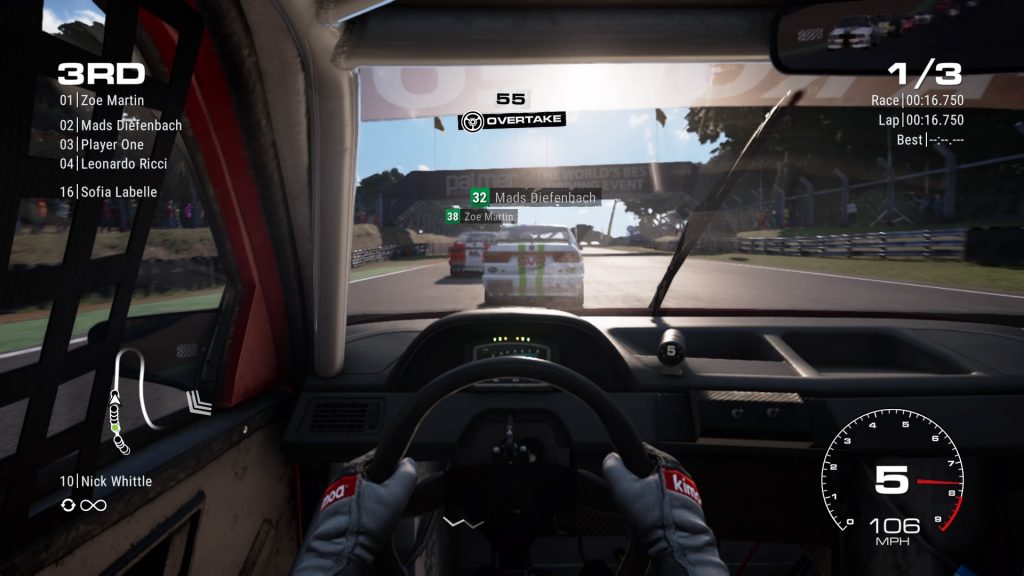 There’s some other choices that opt for simplicity but feel like a compromise. When browsing new vehicles, they’re rated in price, speed and weight. It can feel like the cars lose their identity and I’m not a fan of having to buy them to race them in free play. As it happens, the car selection can occasionally feel slender. At best, you might get four in a class to consider. You can at least tune them before a race and unlock liveries to give them some personality. Even the inclusion of Fernando Alonso feels a little blundered as he lends his name to a career path and appears as racing opposition.

I’m conflicted with GRID. The racing is eventful and fun but it’s encapsulated in a career mode that so thinly spread. It looks, sounds and races well but the shortcomings only look to highlight what might have been. Codemasters has shown it’s capable of something more accomplished and substantial and GRID feels like the first step of a long ladder.

GRID
7 Overall
Pros
+ A great looking game.
+ Sound really adds to the atmosphere of each event.
+ Feisty AI leads to some engrossing races.
+ A forgiving handling model allows for some brave manoeuvres.
Cons
- Content is thinly spread across disciplines.
- Very, few event types result in a repetitive career.
- This also hamstrings your online options.
Summary
As with most reboots, there's a sense of compromise running throughout GRID. The fundamentals are there. Racing feels fantastic and action-packed with a great emphasis on presenting the races as genuine occasions. Unfortunately, you see where the icing has been spread thin. The career mode can feel repetitive and lacking in variety. As a racer, it's sound but it feels like an appetiser.