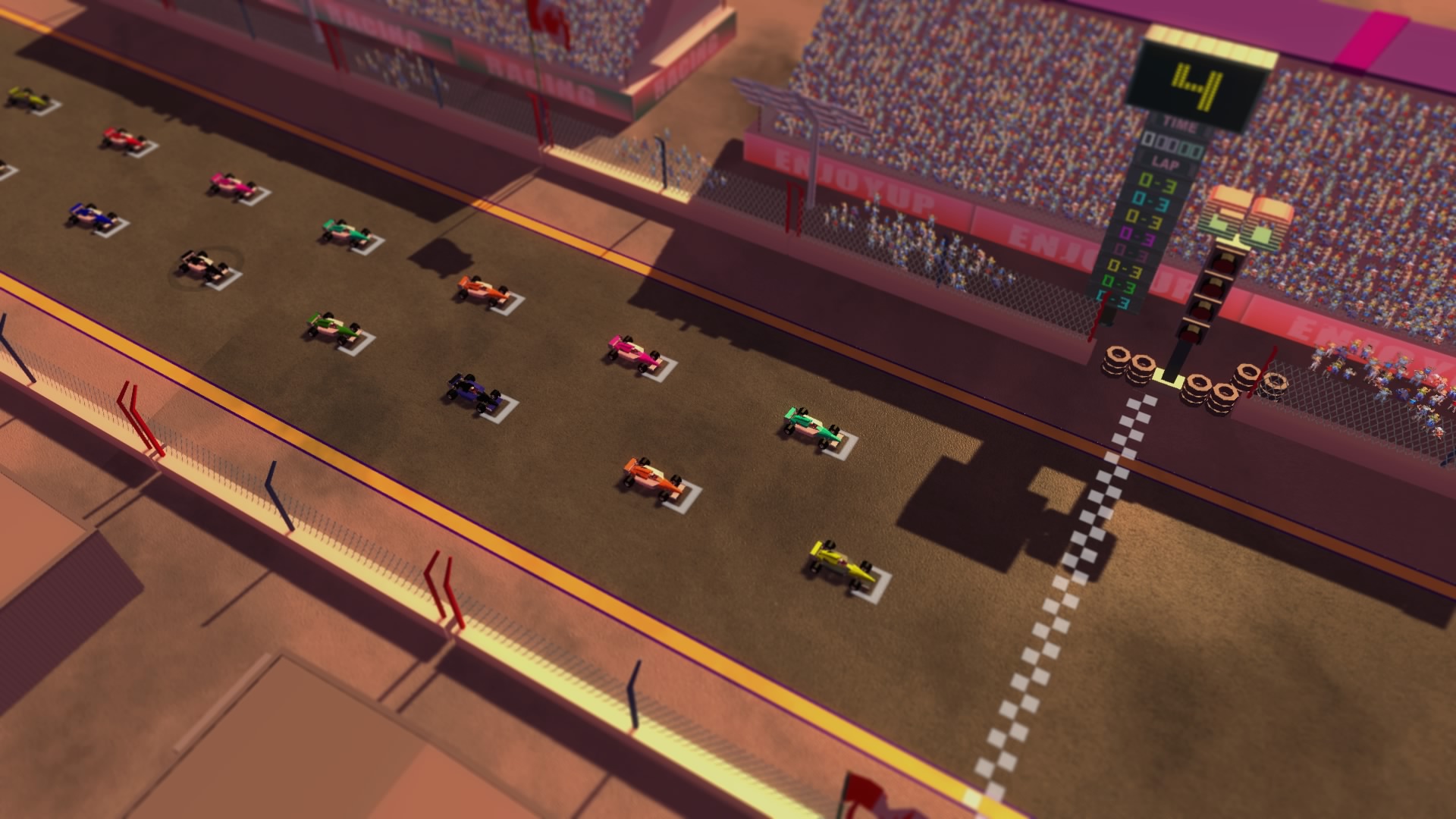 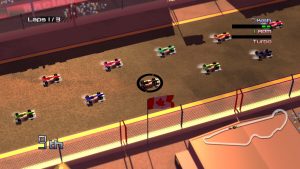 Some games are just so terrible that it makes you want to stop reviewing them.  Grand Prix Rock’N Racing is one of those games.

After getting past the very basic menu (championship, time trial and multiplayer as well as a basic settings option for music and effects), I went into the championship option, watched the initial camera pass of the grid, as well as a little fly-by by some planes and that point my initial thoughts were that this looked like my sort of thing.  The cute retro isometric graphics reminded me of an old arcade game called 1000 Miglia and I was eager to get into some nice top-down racing.

I pressed R2 instinctively to accelerate but nothing happened.  I pressed every button.  Nothing really happened.  I exited the game and looked at the settings option.  The controls are shown there and yep, R2 was indeed the acceleration button but there are also gear up/down buttons, so I figured that was what was wrong.  Maybe I needed to engage a gear or something. 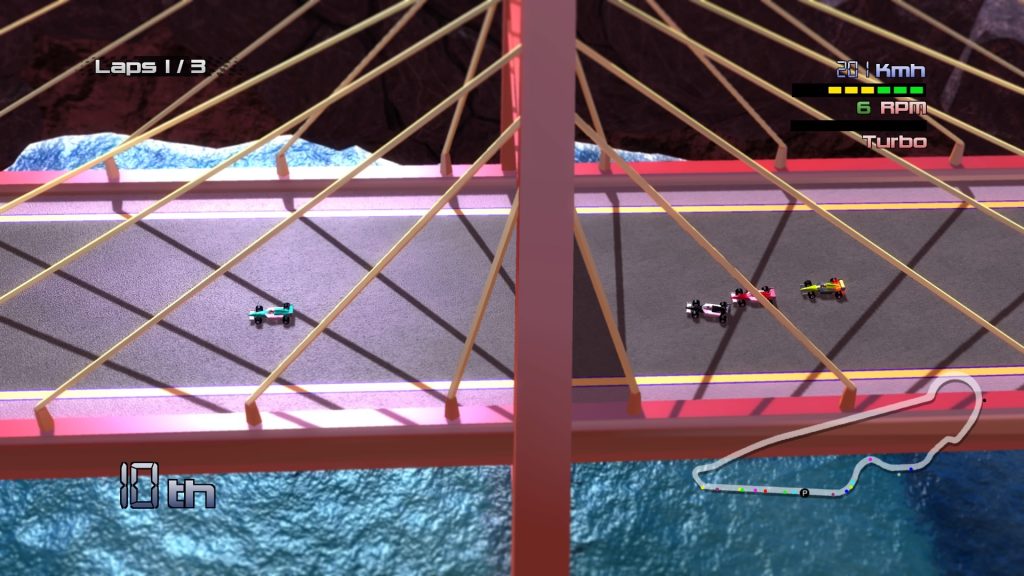 Nope.  You see, the car was set to auto gear shifts (an option stupidly hidden in the upgrades menu).  R2 does accelerate the car but here’s the thing, it accelerates at roughly the same speed as a fucking glacier.  I assumed for a second that my DualShock 4 was broken.  I’m not kidding.  I tried another one.  Same outcome.  I was so fucking absolutely stunned by how slow the acceleration was that I actually read a couple of reviews of the game just to make sure I’m not a complete idiot.

For a game where you race in F1 cars, the acceleration is much worse than my old Talbot Samba that I owned twenty years ago (and it was shit then!).  Accepting that finally, I started racing.  The rest of the grid pulls away a bit quicker than you.  You’d expect that from an arcade racer, knowing that you’ll usually catch them all later on.  NO.  They are all faster than you too.  They are dumb as fuck also.  They’ll crash into each other at any given opportunity and as you sail past them, you’ll think you’re making progress but no.  They’ll hunt you down at what appears to be 150% of your top speed and if they touch you, you’ll go spinning into a wall.  At which point your race is over because the acceleration is so bad. 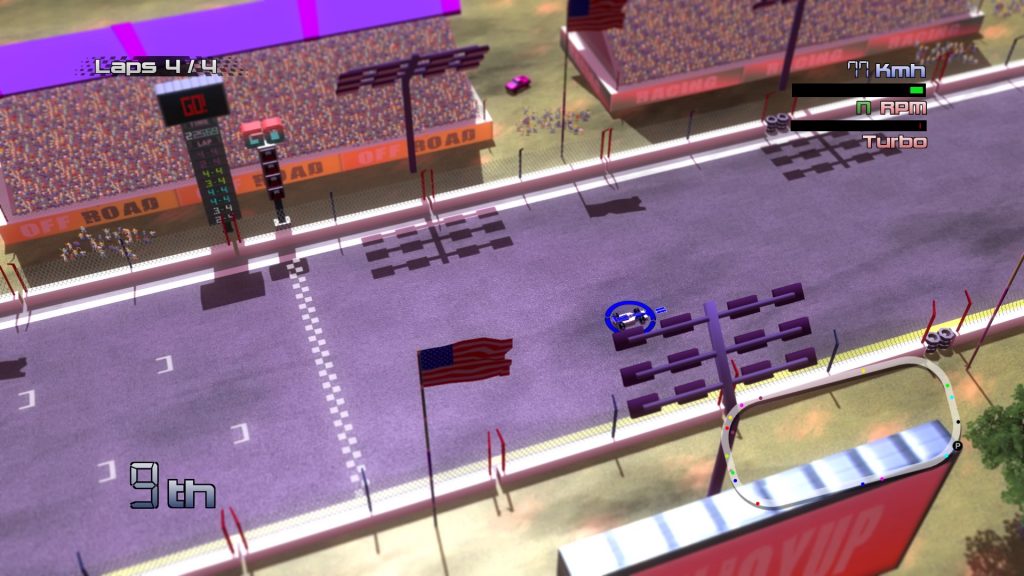 Your steering isn’t much better.  You turn roughly slower than an eighteen-wheeler making evasive actions practically impossible.  And if you crash, you’ll probably end up facing the wrong way.  Accelerating and turning in these cars is horrific.

Eventually I finished the first race (in 9th place) and found myself in the middle of the pack for the next race.  The race started and the car behind me drove into the back of me and span me off of the track.  I restarted, putting upgrade points into acceleration.  Same outcome.  I put the points into steering, hoping to at least get out of their way.  Same outcome.  I put it into top speed, accepting that I was always going to get crashed into.  Same outcome.  Sometimes though you won’t spin off, I waited for one of those times but you’ll still run into packs of crashed opponents or you’ll be steamrolled by some rogue speedy bastard from behind. 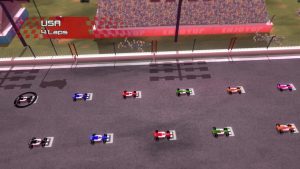 The whole thing is fucking joyless.  It’s just so awful.  Given that this genre goes back over thirty years and games like Super Sprint managed to do it infinitely better in the ’80s, you have to wonder what the developer was thinking.  And when you realise that everyone hated the Xbox One version of this earlier in the year, it makes it hard to fathom why they never improved anything.  Much like Cast of the Seven Godsends, if your game was shit months ago, it’ll get a bad review now.

I quite like the visuals.  Everything else I absolutely hate.  This is upsettingly bad and for a second I thought it might be something to do with the superlative Rock N’ Roll Racing but thankfully this abortion of a game has no links to that classic.  Please don’t make me play any more of it.

Grand Prix Rock'N Racing
1 Overall
Pros
+ Reasonably nice graphics
Cons
- Everything else about the game is awful
Summary
Grand Prix Rock'N Racing is a burning wreck of a racing game. Devoid of excitement, enjoyment and technical merit, it feels like you are driving a car that has been filled up with bricks. Bricks that will later be used to beat you about the head and neck.