From Seattle based dev Aggro Crab by way of publisher Team 17, comes Going Under. Simply put, it’s an office based roguelike dungeon crawler.

Your character Jackie is the newest intern to a hip startup subsidiary of the monolithic Cubicle company. Parallels to that Seattle based global retail behemoth aren’t hard to see here, just as each of the three failed startups you play through are amusing pastiches of business hipsterism. Only instead of going on to the next ill-conceived idea, the denizens of each are cursed to see out life in purgatory. 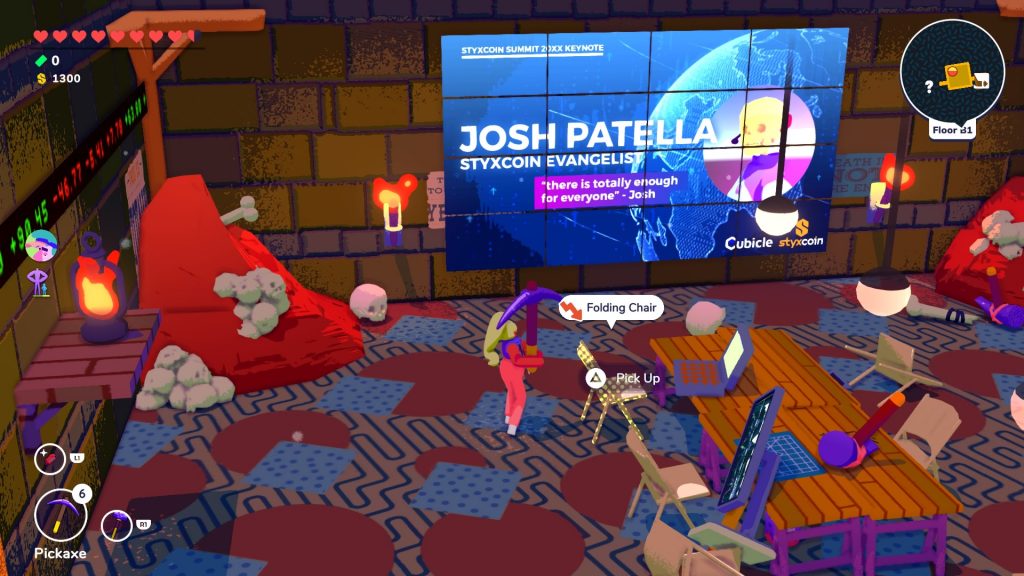 The friendly AI overseer has assigned you to their newest startup Fizzle Beverages. Their USP is a sparkling water that’s also a meal replacement and you’re ostensibly taken on as a marketing intern. The big boss is a purple Bezos-a-like called Marv. Just like Jeff himself, you’re never quite sure of his exact motivations. Each of the startups takes the mick out of three turn-of-the-millenium fads with a very keen eye and frequently amusing parodies. First you’ll have to tackle a coffee place called Joblin with a hopped up caffeine fiend as the boss. 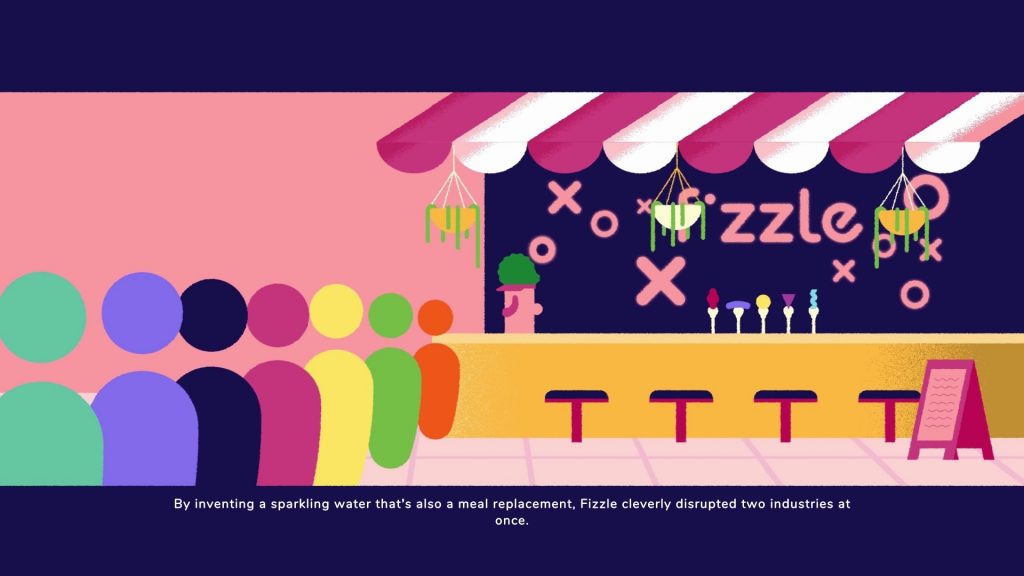 In both senses, the boss of the failed startup as well as the one you have to defeat to progress the story. Next is Winkydink that is a knowing pastiche of any number of dating apps and sites. The third dungeon is Styxcoin that readily rips the piss out of Bitcoin mining. Each of the three dungeons have sub-tasks available in them, jobs in Joblin, dating in Winkydink and extra datamining in Styxcoin. 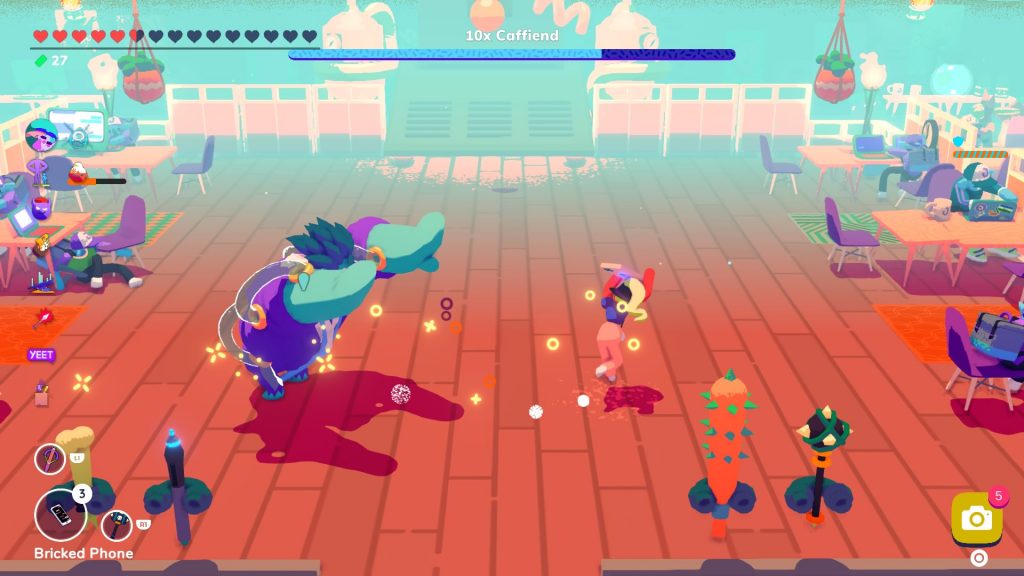 The only weapons you have onhand are those you can find in each of the respective dungeons. For example in Styxcoin it’s all mining equipment and Winkydink there’s a love theme. Handily each item you pick up has a little indicator to show how much damage you’ll inflict upon hitting a mob with it. If you can pick it up, you can do damage with it. Naturally the more hefty the item, the more damage you’ll do. A basic pingpong paddle will do less damage than, say, a foldup chair for example. 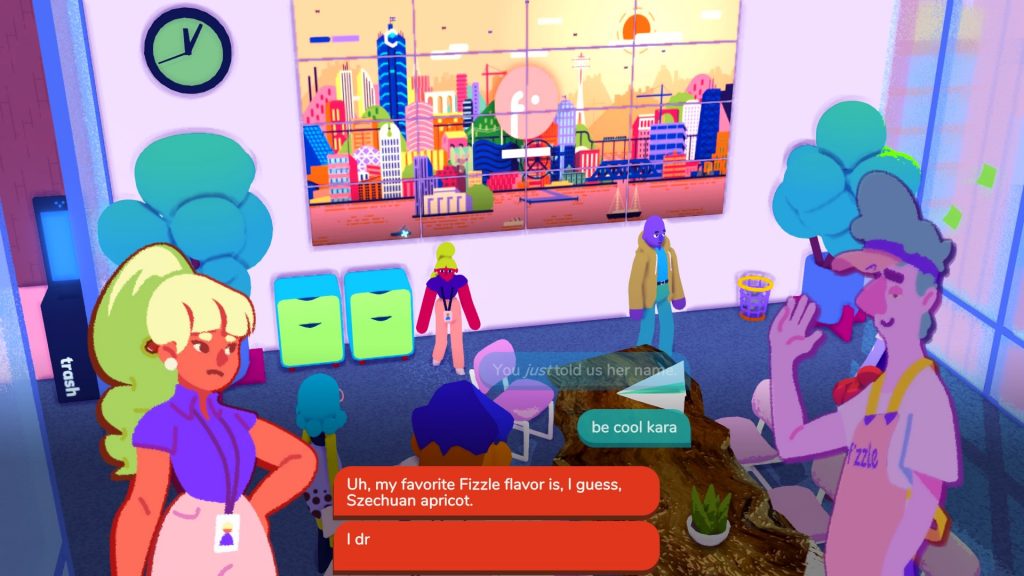 You’ll interact with several of your colleagues by way of them mentoring you. Practically this means you’re given missions in the dungeons, such as striking ten killer blows with a bricked mobile phone handset or reaching the final floor without spending any cash. Some of these objectives can be frustratingly oblique, but it’s still fun to try and fulfil them. As you meet these goals from your mentors, you’ll gain passive abilities by selecting one mentor over another. The stoned dude was most handy we found, especially given his later unlock of allies to help you in dungeons. 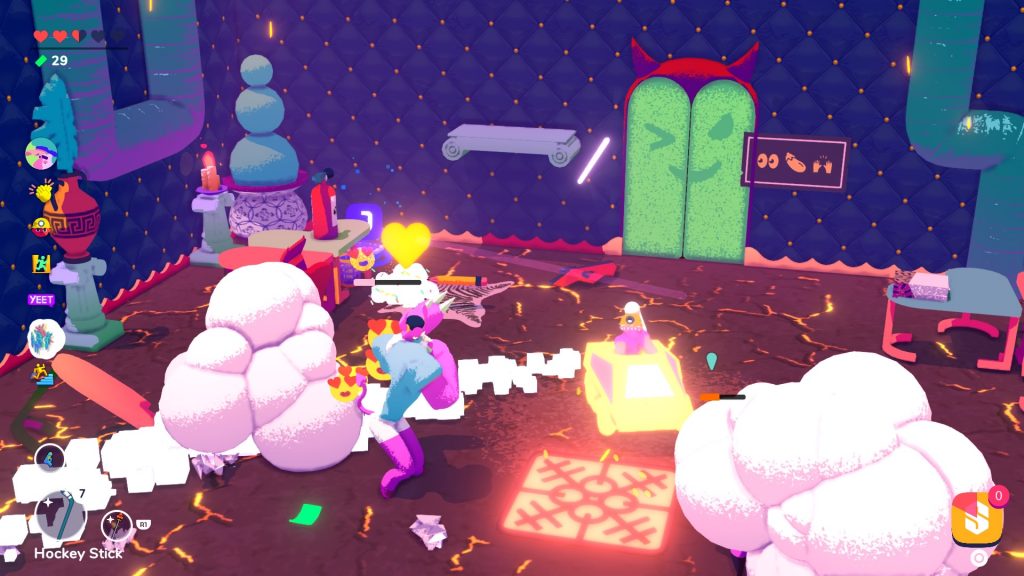 One major factor in whether a successful run to a boss will succeed is your skill loadout you’ve unlocked on the way there. These range from setting enemies on fire when you target them to some like automatically stunning all enemies when you enter a room. Handily, these abilities stack so you can be packing some serious heat when you reach a boss. We had one run where we reached the boss with just two hearts remaining, expecting a quick wipe we somehow ground out a victory by a bit of good luck and some lucky equipped skills. 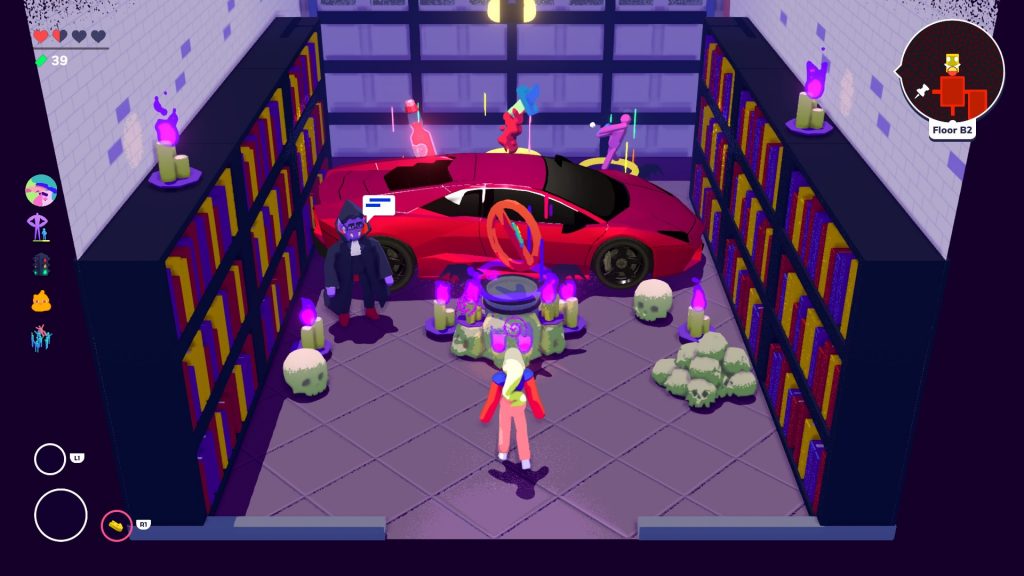 You can unlock new skills to find in dungeons in the main Fizzle hub between attempts. These are reliant on your success in previous runs anyway. You can gain skills one of three ways: first by finding a room with two skills to choose one from, secondly by buying in a shop with ingame currency you gain from killing mobs and finally, by meeting the cool vampire dude. This last one is notable as you’ll be cursed for a short time too, something like all your weapons have crap durability or you can’t lock on to enemies. But the tradeoff is often worth it. He’s got an ace Lamborghini too, incidentally. 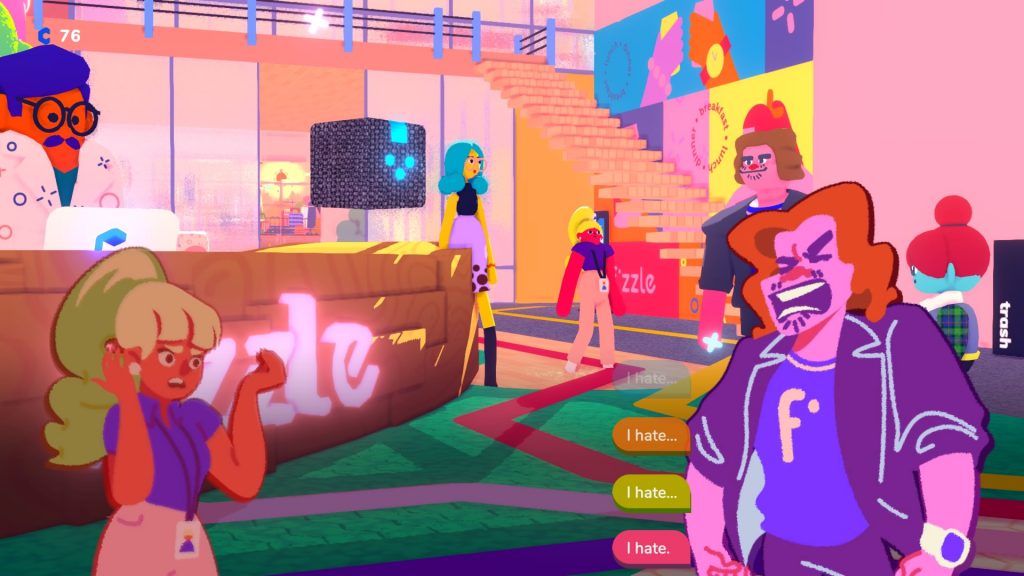 One more contributory factor is apps you can download to your phone. They range from decoys to cars you can drive and knock down enemies with to one that upgrades your currently equipped weapon. They are a handy augmentation and can prove very timely. Some are pretty useless, but others can give you a little breathing space in a hectic fight.

Cubicle are still the overseers of all, dispatching drones to the dungeons to re-up you with the occasional weapon, skill or more helpfully health items. If you’re quick enough you can destroy the drone in the process, much to the delight of one of your mentors. 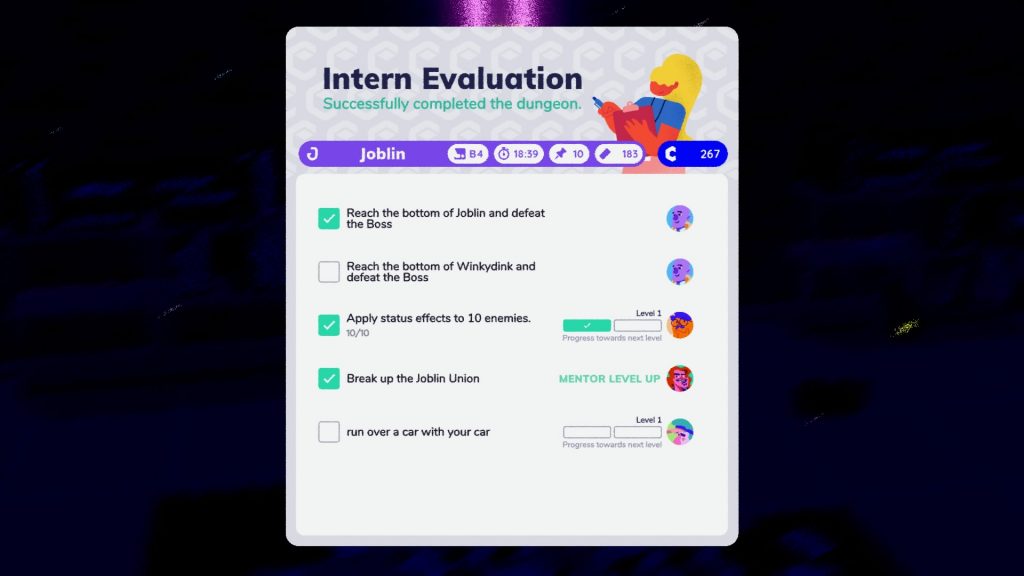 Regards the difficulty, on default settings Going Under is nails hard. We managed to reach the boss on the first dungeon and beat him after three attempts, but very much by the skin of our teeth. Once we got to the Winkydink latter stages we realised we were well out of our depth. Thankfully there’s assists available for the… less skilled or impatient player. In our case, we wanted to see as much of the game as we possibly could prior to penning this review, so you’ll forgive us for turning all the assists on. 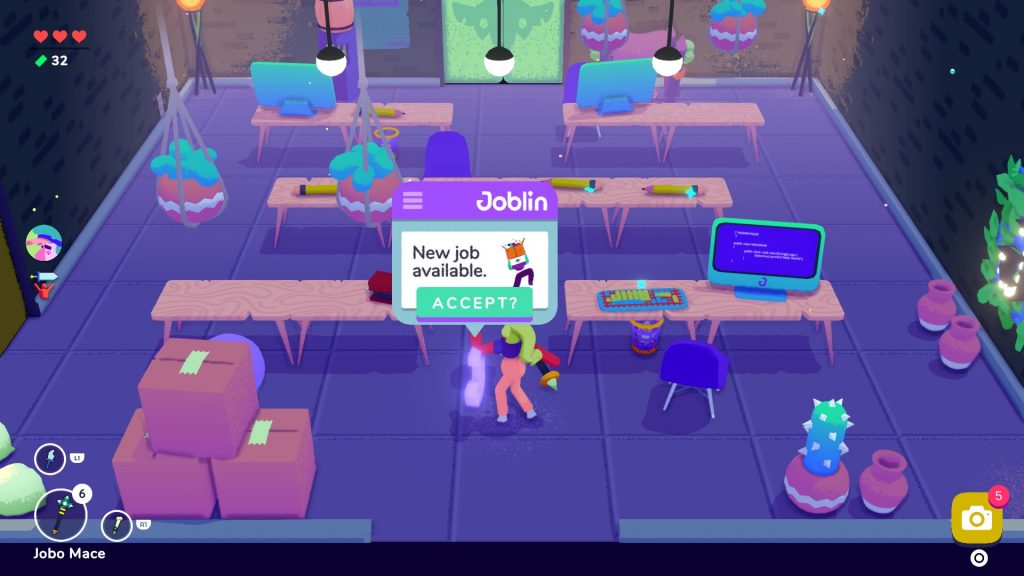 Even with the assists on, there is still quite the challenge and you’ll still be reliant on a lucky set of variables for a successful run to a boss, let alone beating them. Eventually having beaten all three bosses you’ll be subject to a catastrophic event. We’ll spare you the details for the sake of spoilers, but it makes for remixed versions of the three dungeons.  Refreshingly, you’re not penalised in the slightest for having chosen the easier option and you can unlock all trophies in this manner. This gives Going Under a refreshingly accessible angle that other roguelikes don’t necessarily have. 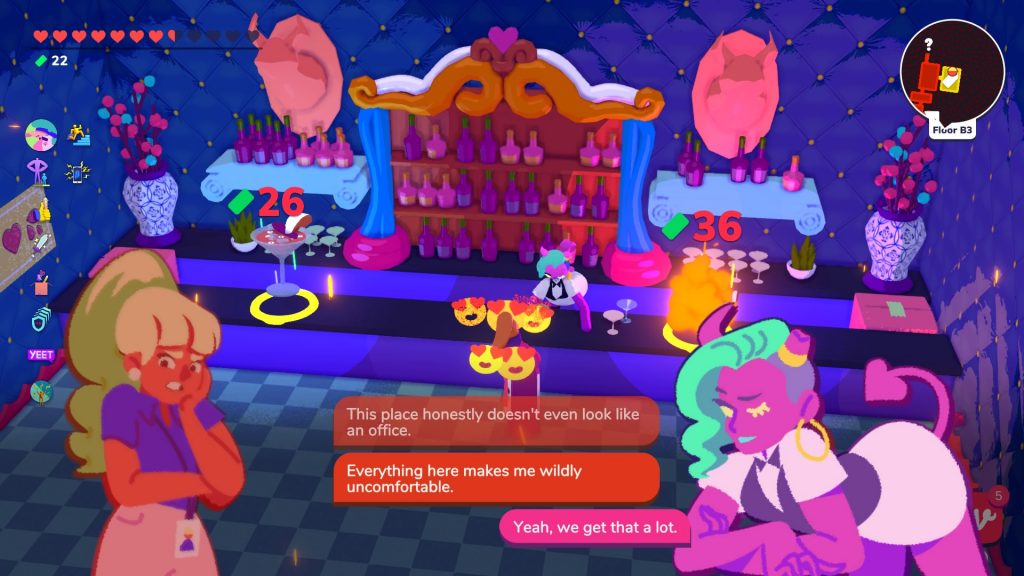 For a game of this sort, it’s usual we have the volume down low ’cause we’re sorta playing it while listening to a TV show or a CD. But in the case of Going Under, turn the volume up as the music is quite excellent. We got a definite Teklife vibe from one particular track for instance, a lovely surprise up there with Frontline Assembly cropping up when we played Blastcorps on N64 in terms of unexpected musical delights.

In conclusion, Going Under is an excellent roguelike-cum-dungeon crawler with brilliantly realised pastiches of inevitably doomed startups, as well as the biting critique of Amazon. It’s addictive and tons of fun with it.  Get on this, it’s great.

Going Under
9 Overall
Pros
+ Well observed pastiches of startup culture as well as commentary of Amazon's insidious ways
+ Weapons are literally what you can pick up. Smashing mobs with a monitor is very cathartic
+ Three dungeons might seem sparse but there's tons of replayability plus remixed versions
+ Excellent music
+ There's no penalty for playing with assists on
Cons
- Perhaps a little hard on default settings
- Some goals are frustratingly oblique
- Some apps and skills appear useless on occasion
- Even if a goal is clear, you'll sometimes struggle to meet the criteria due to RNG
- The passive abilities from some mentors can make others feel a little redundant
Summary
Going Under is a fantastic roguelike dungeon crawler with a keen satirical edge and addictive gameplay. Very good indeed.