Ginga Force is a vertically-scrolling shoot ’em up that has quite an interesting pedigree.  It comes from genre-specialists Qute Corporation and they’re responsible for some fairly unique releases.  They initially started out making shoot ’em ups for the WonderSwan handheld before porting them to the Xbox 360 and continuing to make titles exclusively for that console.  One of those was Ginga Force, which arrived in 2013 to some good reviews but now (well, in September 2020) the game is available for PS4.

The game is what we’d call a modern shoot ’em up.  Sure, the action, for at least the majority of the time, is seen from above and played out on a 2D plane but with crisp, polygonal visuals rather than the traditional hand-drawn style.  Also, the game clearly has a console feel to it combining a fairly in-depth story and a lot of permanent upgrade options that encourage repeated play. 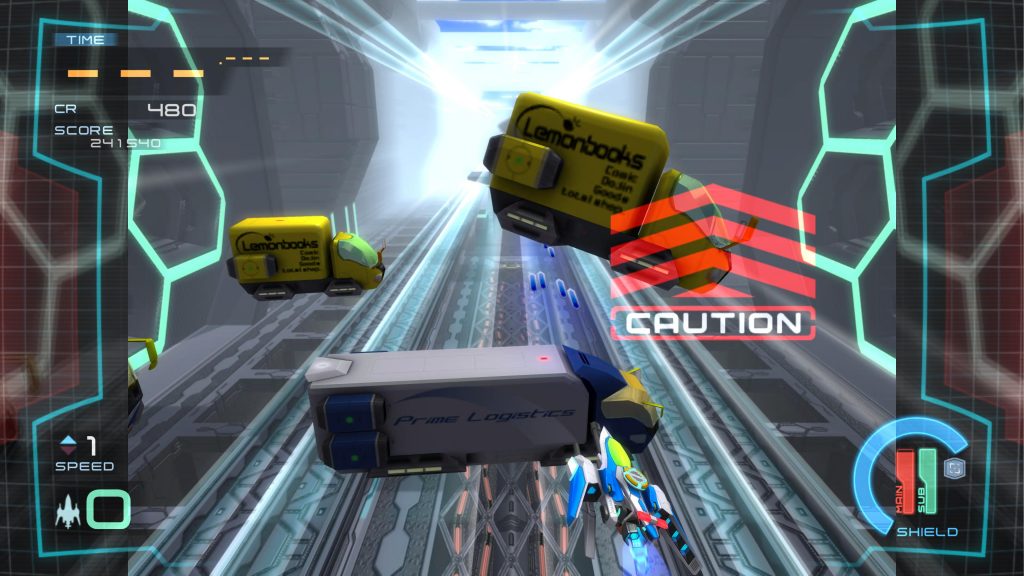 The plot is standard Anime-inspired fare.  You play as a pilot working for the Mitsurugi Security Service and your job is to protect the people of Seven Tier, a newly-discovered habitable planet which is rich in Septonium, a new energy source.  Beyond that, we’ve no idea what’s going on because the story plays out during gameplay.  The problem is that all the voice acting is in Japanese and you’d better not even think about taking your eyes off of the action for a second.  Anyway, like all Anime-inspired shoot ’em ups, all of the characters sound like they are twelve years old.  After a while, the constant shrieking made us want to turn off their audio anyway.  By the way, Ginga means ‘galaxy’ apparently, so don’t expect an army of redheaded people to appear in the game.

But you don’t play shoot ’em ups for the plot, you play them for that sweet, sweet shooting action.  Ginga Force is set across ten stages, each punctuated by a big boss battle.  The controls, as you’d expect, are tight and surprisingly flexible thanks to the

button which is used to adjust your speed, allowing you to pivot between slow, controlled movement for weaving through bullet patterns and faster settings for maneuverability.  You’ll be happily taking down targets and dodging through flak fairly intuitively in no time. 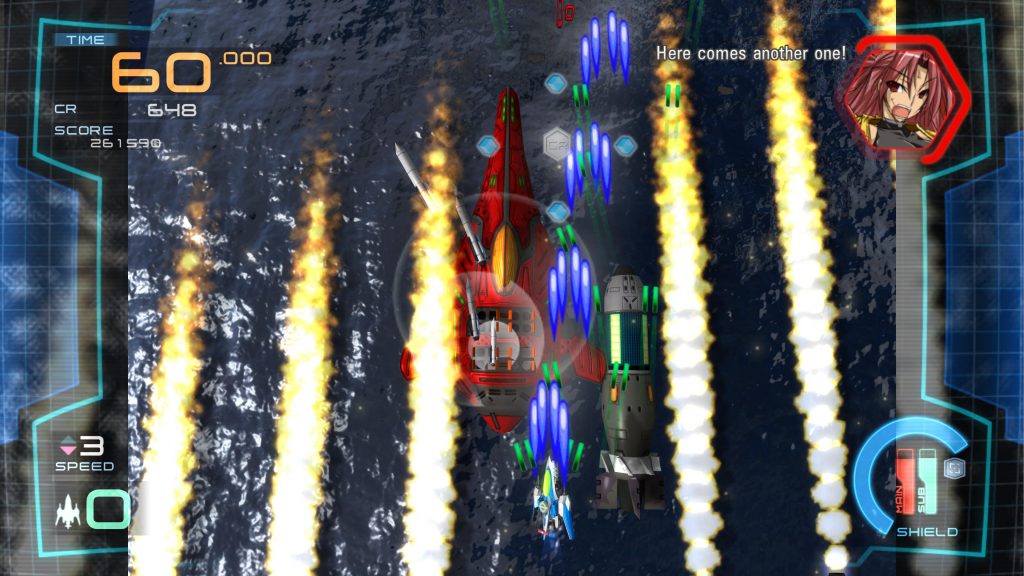 You also have a primary weapon, a secondary sub-weapon and a special weapon.  These all draw from independent energy supplies and are topped up by picking up tokens dropped by your enemies.  In terms of how each weapon behaves, this is where things get interesting.  During gameplay you’ll earn credits and between games you can spend these on new gear.  Each weapon type can be switched out, provided you have enough credits or have unlocked the newer gear by completing certain stages of the game.

Each weapon type has multiple variations allowing you to focus on powerful, direct shots or to cover more of the battlefield with spread fire patterns or homing missiles.  The special weapon can give you a shield if you want or you can focus on bombs that need to be charged up.  This gives some welcome variation although at first it can be a bit overwhelming.  Sometimes all you want are levels that are designed perfectly for a set weapon loadout but for those of you that like experimenting, Ginga Force gives your ship a lot of different options.

You can also equip extra gear that can highlight targets, improve energy usage, add extra lives and so on too.  You can even customise your ship too, although this only gives you colour options.  But whatever loadout you pick, eventually you’ll no doubt fail at a level and hopefully you’ll have enough credits by then to upgrade your weaponry and your chances.  Failure is, for the majority of players, inevitable but you will unlock extra lives which will ultimately help you to grind through a level.  That’s quite nicely done actually.  If you see a 1UP during gameplay, collecting it gives you an extra life there and then but also increases your life total for further playthroughs.  Nice. 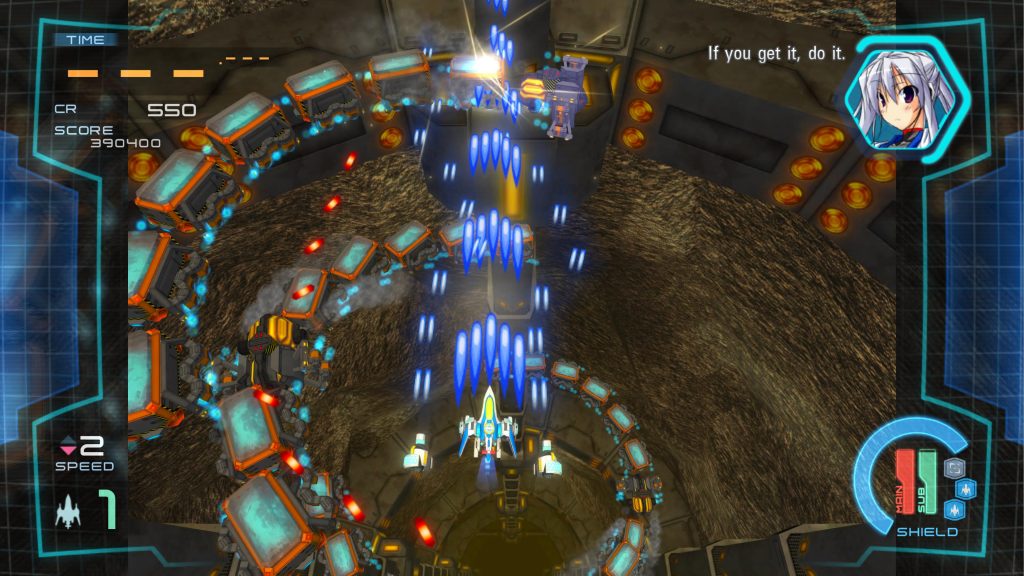 We’re still figuring out all of the intricacies of how you get the higher rankings after beating certain levels but our overall impression of the gameplay is that Ginga Force is an enjoyable, challenging shoot ’em up which does things just about right in terms of the controls, upgrades, bosses and level length.  You are encouraged to play each level on different difficulties (as some weapons are gated behind this) and while a bit of level learning is important, it is still intuitive enough that you won’t have to resort to Ikaruga-style memorisation.

If you want a more traditional shoot ’em up experience, the game’s Score Attack mode gives you three preset loadouts to tackle the levels with.  So, if you have anxiety about what upgrades to use, this is the mode for you.

In terms of the game’s presentation, it’s a mixed bag.  The visuals as we said are crisp and neat but they do feel a bit ‘2013 indie game’ which is to say that there isn’t much detail.  The use of colour is quite good but sometimes the action is a little messy.  It’s never game ruining but it can be a little eye-strainy at times.  The game’s enemies are a little generic too.  The character design seems okay (I’m not an Anime fan) but we’ve seen these archetypes a few too many times now. 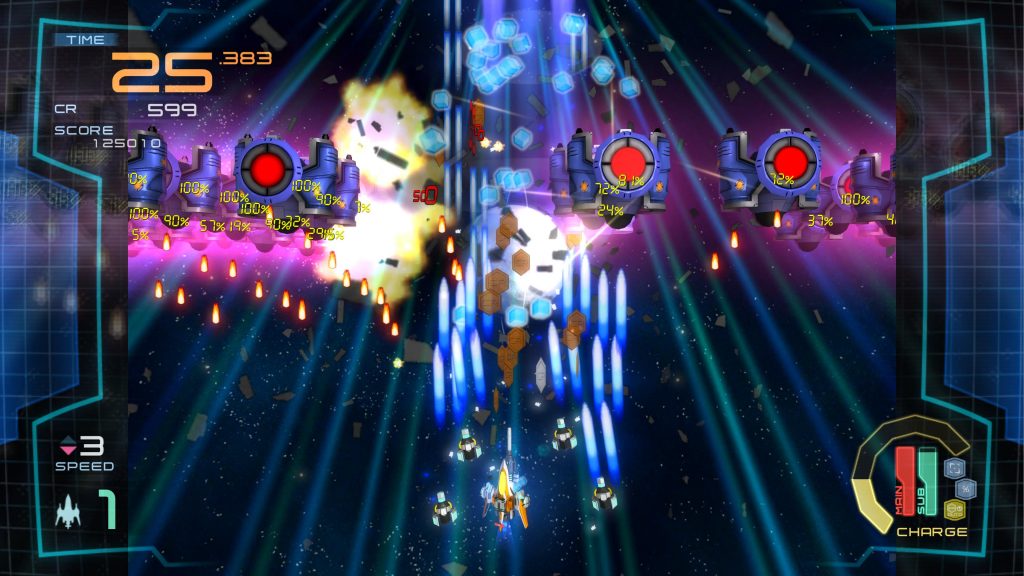 The game’s sound isn’t bad.  You’ve got a stirring arcade-style soundtrack that reminds us a bit of the Dreamcast-era but as we said before, the child-like Japanese voices started to grate immediately.  Especially the younger characters who do that screamy crying thing.  Still, if you’re a big fan of Anime and Japanese culture, you’ll no doubt enjoy it a bit more than we did.

If anything though, the game’s only real issues are that the level of challenge, even on Easy, is probably going to deter casual players and the range of weaponry can make it difficult to know how best to equip yourself for success.  There is a bit of a focus on repetition and this can feel a little bit like grinding at times.  That said, we do approve of the extra lives system and we’re always fans of a shoot ’em ups that give you weapon options so we’re very happy with Ginga Force.  And with Natsuki Chronicles, the game’s sequel, just around the corner (review incoming) now is the perfect time to give this game a go.  It’s not for everyone but shoot ’em up fans will have a blast.

Ginga Force
8 Overall
Pros
+ Good controls and action
+ Encourages replaying
+ Addictive gameplay
+ Decent upgrade system
Cons
- Will be too challenging for many
- Plot gets lost in the gameplay
- Might be a bit grindy
- Audio gets annoying
- Visuals are a little messy and underwhelming
Summary
Ginga Force is a high-quality shoot 'em up that has enough content for you to keep playing and replaying. Shoot 'em up fans will love it and this is the kind of thing we love to see on PSN.